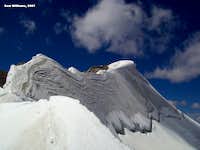 The East Ridge of Mount Temple is listed as one of the “Fifty Classic Climbs of North America” in Steck and Roper’s book first published in 1979. It is also described in Bill Corbett’s new book (2004), “The 11,000ers of the Canadian Rockies” as “a long, committing route, the hardest in this book.” Although the East Ridge has claimed its share of climbers, due no doubt partly to its popularity of being published as one of the 50 classic routes in North America, I found the route to be a long scramble with a few pitches of easy climbing injected to break up the day. Route finding no doubt is the bigger challenge versus terrain on the East Ridge. 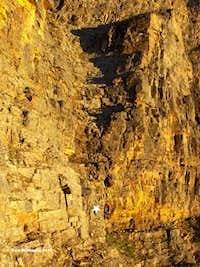 Travel to the Lake Louise exit and turn left through town and follow this road 2.5 km to the Moraine Lake Road. Turn left and proceed for approximately 10kms to a view point pull out on the left side of the road used for Valley of the Ten Peaks. In 2007 there was a barricade on the north side of the road warning of the four person hiking restriction even though the approach up the slopes above is not an official trail. That being said, two park employees, including a public safety warden/guide showed up the same time we did, 4:30AM on a Thursday morning to climb the route. As a climber I have never heeded these warnings as I will not climb such routes with more than one partner. In any regard, outside of the risk of getting eaten by a bear, I don’t believe one is in grave danger of receiving a fine for proceeding.

Start up the avalanche gully down road about 50 meters and across from the pullout. There is no distinct trail up these slopes. As daylight filters in, you will notice a significant buttress above. You can turn this buttress on either side, but the left side went well on firm ground versus scree. As you turn this feature, continue to circumvent the ridge, from left to right until you reach the base of the ridge. Move to your right to ascend the first gully which is loose, but provides easy 4th class climbing. Towards the top you might run into a few easy 5th class moves as you break through to a ledge that circumvents the ridge in both directions. Steep ground lies above you and another yellowish gully (photo) is to your right. That gully goes, but is quite loose and steepens towards the top. Preferably, move left and follow the ridge proper on better rock. 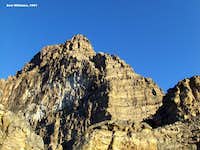 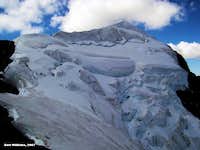 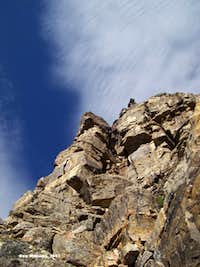 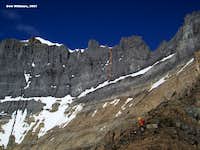 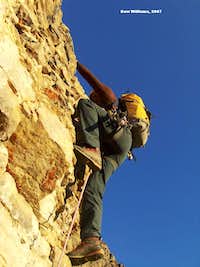 Continue scrambling up the ridge itself enjoying views in both directions until you come to an obvious 5th class step with significant exposure to the right side. There is a piton at the base of this step and a small crack that takes a 00 Metolius or small nut. It is somewhat flaring so a cam would work best if you brought one that small. A move or two above that placement and this step is overcome. This was the first time we pulled out the rope, but many do prefer to short rope to this point. We put the rope away again and proceeded to the “Big Step”. When necessary, traverse the ridge left on your way to the base of the Big Step.

The Big Step is the crux rock climbing of the day. It is a 200m buttress with only four pitches of technical climbing consistent at about 5.6-5.7 grade.

1st Pitch-25m-5.7/ The first pitch runs left of the arête allowing you to protect in a flake approximately 10m high, then goes straight up another 10m to an alcove that you can set a #3 Camelot in or save your Camelot and swing out to the arête to clip a piton. Continue straight up to the top of the pillar to a flat belay stance with two pins up high and a crack at eye level that takes a #2 Camelot. There are also rap slings (2007) on a chock stone at this location. I placed one piece of pro and clipped one piton on this pitch.

2nd Pitch-50m-5.7/ Clip the high piton and move out left several meters before the ground above gives way to typical 5.6-5.7 climbing. You will find several pitons and knife blades and tat here and there as the route moves left and then right and then up to a large ledge.

3rd Pitch-20m-5.6/ There is not much to this pitch. Just climb the short wall in front of you, placing a cam or two until you reach the next ledge which is quite broad. Un-rope or short rope and move left to a loose gully and proceed at an angle up left until you ascend into a steep dark chimney, approximately covering 90m in ground.

4th Pitch-25m-5.7/ Move right into the chimney and make a 5.7 move up and over a greasy block (stuck cam-2007). Then move back left and climb easy ground to the chimney finish which is the crux of the pitch and the site of another lonely stuck cam (2007). Make an exciting move up and over and build your belay in a crack at the very lip of the roof so as to not drop rock on the 2nd.

Put the rope away again and move through the next chimney through an exit on the left and continue back up the ridge proper to broad ground and an unobstructed view of the “Black Towers”. Study the Black Towers well at this point as this is your most critical route finding decision of the day. I have provided a photo showing our line through the towers. One is tempted to take what looks to be a much easier line to the right, but supposedly it forces you to more technical ground above before you can gain the glacier. Proceed up the ridge until it steepens, then traverse on the upper tier of two large ledges that go left. Neither look inviting, but once you get past a chimney far to the left, the ground above opens up to laid back scrambling on decent rock.

Angle left for the correct break (photo) through the black towers. Stay on the firm rock as much as possible to avoid the scree. To the right you will notice quite a few weird gargoyle rock formations. Continue up and left, traversing easy gullies until you reach the large angled ledge directly below the black towers. Traverse left until you can find a chimney just big enough to squeeze up and into from the right or scramble up left of it. You no doubt will encounter snow and ice on this ledge.

Above the chimney/pillar we scrambled mostly 4th class terrain (5th here and there) un-roped up this gully system as it curved back left towards the top. Eventually you regain the ridge as the north glacier of Mount Temple appears ominous (photo) over the horizon towards the summit.

As in many instances, the travel up the steep glacier looks worse than it really is. Put on your crampons and rope up as you proceed at a left angle gaining steep ground staying left of the larger crevasses, but right of the actual ridge line and its cornices and holes. Angle ever so slowly up to the ridge proper again and eventually you take the ridge and notice ground not too far below you on the left side. As the exposure to the left softens, the exposure to the right steepens. You will cross several glaciers en-route to the summit. Proceed along the ridge at times climbing the left side and at times climbing the right side and even at times straddling the ridge with both feet to avoid holes and crevasses. As you near the summit, you will climb over a huge north facing ice cornice. Right before the summit, there appears a never ending crevasse in the most unlikely of spots. Move left of this hole and on to firm ground where three summit registers await (2007).

After enjoying the summit, descend via the scramble route down the southwest ridge and exit at Moraine Lake Lodge where you might or might not catch a ride back to your car up the road. If you are a brave soul, as I was this day, take a swim in the small lake below Sentinel Pass, it will refresh you in a hurry. At a minimum, take the time to soak your feet.