You probably are thinking “Man, how can a small mountain like that have such na demanding route?”. Wot far from the truth, but Ferraria Peak has a harsh route which hike/ climb has been done only 4 times so far.

The reason for its difficulty is the altitude gain, the heat of the day, the cold of the night, and the exposed narrow and steep ridge. The starting point is at just 300m high, around 984 feet. And the summit is at 1.754m high, or 5.756 feet high. Quite a gain.

The first day is the most challenging one. Hot, humid woods will push you to your limit as you try to gain altitude as fast as you can to escape the heat. But when night falls, this is gonna change quite a bit as we can see in a couple minutes. The trail starts and follow a natural failure that has a river and keep going up the river all the way up to 700m high, then it turns right as soon as you see the beginning of the ridge.

Now you’re probably asking yourself another question: “So okay, the altituge gain is around 1.450m, okay I can do that, so why not one single push for the climb?”. Simple, to hike in Serra do Mar (Sea Sierra) is very demanding. At all time you have to struggle against high roots, going over it, or sometimes bellow it, and this is a move that slowly will bring your muscles to its limit causing cramps and a lot of pain.

Another thing is that as the routs is too steep, you feel okay going up but as you get tired, the way down from the same route seems a lot more frightening then up, and this is a big move for most people.

And of course the final reason: It’s traditional for southern brazilian mountaineers to establish traverses. They almost never start a long hike and come back on the same trail. Usually they start and point one and finish at point two. Almost like a law down there. So they start at the east ridge of Ferraria, and they come down by the west face where the normal route of ascent to Ferraria is.


Who conquered the route/ Repetitions

Water: Not easy to find water once you get out of the river. Carry up at least 3 liters to drink during the hike/ climb and to get down the other side on day two.
Steepness: Once you pass the 1.000m line, at some points the low vegetation will be so steep you’ll fell like climbing actually, we call it “wood climbing” since you grab on deep strong roots to keep from falling, and move up as soon as you find a new one within your reach. Careful with that.
Temperature difference: In Ibitiraquire range this is a dangerous problem. Temperature in winter can change from soft 20ºC - 25°C in day to –5ºC at night, and sometimes in wet conditions. Trust me, Ibitiraquire range is not a place for inexperienced hikes, every year at least one person dies down there. I know, had to believe, but it happens as people underestimate its mountaineering challenge potential.
Weather: Very, very unstable in Ibitiraquire range, so watch yourself and always, always carry with your fresh supply of dry socks, a good boot, warm and dry change of jackets, and waterproof jacket. 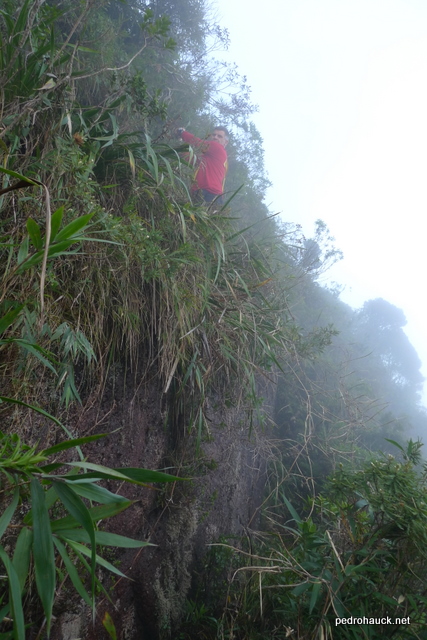 This is wood climbing! This is a almost vertical part of East Ridge to Ferraria summit. I told you, it's not easy!

Brown recluse spiders are usually between 6–20 mm (1⁄4 in and 3⁄4 in), but may grow larger. While typically light to medium brown, they range in color from cream-colored to dark brown or blackish gray. The cephalothorax and abdomen may not necessarily be the same color. These spiders usually have markings on the dorsal side of their cephalothorax, with a black line coming from it that looks like a violin with the neck of the violin pointing to the rear of the spider, resulting in the nicknames fiddleback spider, brown fiddler, or violin spider.

Its bite causes a serious necrosis and it may kill a ill adult person, or a perfectly healthy child. So be careful with it. There is a lot of brown spiders in Paraná state, especially in Ibitiraquire range!

The jararacussu is a snake in the Bothrops genus, found in Eastern Brazil (from Bahia to Santa Catarina), Paraguay, southeastern Bolivia and northeastern Argentina (Misiones province). Like all Bothrops species, the jararacussu has rather potent venom, and fatalities are known.

Watch out since you can bump into one of those!!!