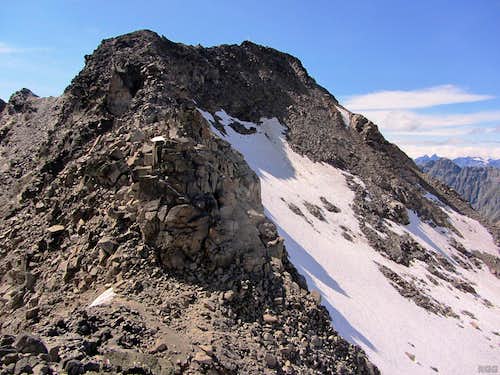 Piz Sesvenna east ridge as seen from partway up the west ridge of Foratrida
As the highest peak in the eponymous Sesvenna Group, the Swiss/Italian border peak Piz Sesvenna is a popular destination in the area, both with climbers and ski mountaineers. The normal route to the summit is by the east ridge, gained from the saddle with Foratrida.

Expressed in time, climbing Sesvenna is more about getting to this saddle than about the short final. Nevertheless, the final scramble up the east ridge is one of the highlights of the route.

The elevation gain from the saddle is 123 m. The crux is just next to the saddle, where a large buttress blocks easy access to the ridge higher up. At UIAA grade II, it is a little too hard to be called a hiking peak, but most climbers won't feel the need to use a rope. 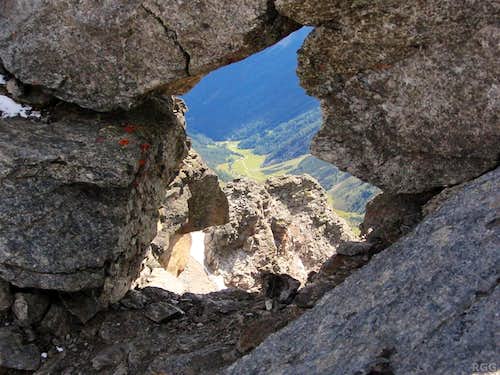 View south from the ridge down to the Avigna valley, some 1200m below

SwissMobility map centered on Piz Sesvenna
Click here for a larger version
There are several possible starting points, depending on the approach.

Schlinig
Located east of Piz Sesvenna, the Italian village of Schlinig / Slingia (1717m) has only one access road. It can be reached by car or by bus from the Ober Vinschgau valley. The nearest railway station is about 10 km away, just outside the small but lively town of Mals.

Likewise, but west of the mountain, only one road leads to the Swiss village of S-charl (1810m). It can be reached by car or by bus from Scuol, which has the nearest train station.

South of the mountain, these two neighboring villages straddle the Italian / Swiss border (1248m). Though a relatively minor border crossing, there is still a regular stream of traffic, including international border buses connecting Zernez, Switzerland, and Mals, Italy. Buses stop at the border for inspection, but that usually does not take long. Last time I passed, I didn't even have to show my passport.


See Südtirol Mobil | Mobilità Alto Adige for public transport on the Italian side, SBB for Switzerland.

There are two normal ways to get to the saddle between Foratrida and Sesvenna, from the north and from the south. The northern approach is the more scenic of the two. The two can be combined if you don't mind ending in a different valley than where you started. 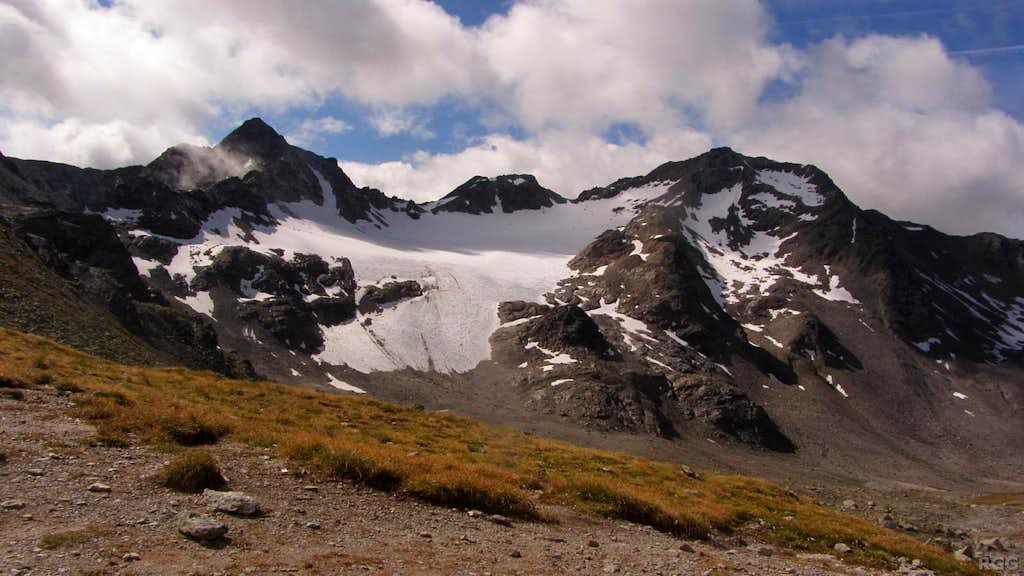 The northern approach crosses the small Sesvenna Glacier (Vadret da Sesvenna in the local Romansh language spoken in Switzerland, Sesvenna Ferner in the local dialect in neighboring Süd Tirol in Italy). It lies wholly in Switzerland, but can be accessed just as easily from Italy. The glacier has few crevasses, but ask locally about current conditions before crossing it unroped.

Sesvenna Hut
The Italian trailhead is the small village of Schlinig (1717m). Hike up the dirt road up the Schliniger tal, direction northwest. It leads to the Schlinigpass (2309m) and beyond to Switzerland. Higher up, the road gets smaller. It's popular with mountain bikers.

After an hour and a half you reach the welcoming Sesvenna Hütte (2256m). The hut warden will know if the Sesvenna Glacier is safe to cross unroped. Visiting in 2012, I learned that it was, but that I would need crampons. Unless you're prepared for a long day, I suggest spending the night. If you arrive early enough, you can spend the afternoon on visiting nearby Piz Rasass (2941m), a good two hour hike in the summer. Earlier in the year, with enough snow, you can ski back down to the hut.

The next day, and well rested, set out westward along trail 5 to Fuorcla Sesvenna (2819m). It's a scenic trail, passing several alpine lakes. On the border with Switzerland, the high pass of Fuorcla Sesvenna (46.7236°N / 10.4112°E) offers a great view of Piz Sesvenna, and the Sesvenna Glacier as well as the the route is clearly visible. The saddle between Foratrida and Sesvenna is 2.2 km away, direction 184°.

A boulder field separates Fuorcla Sesvenna from the glacier. In 2014 I followed the main trail into Switzerland for a minute, dropping down about 20&nbps;m, when I came to a junction with a smaller trail veering off to the left, heading south into the boulders. Red paint marks help showing the route. Shifting rocks will undoubtably cover the trail from season to season. Early in the year, when the trail is not yet repaired or when it's hidden by show is hiding it, you will have to find your own way and the route can be much more laborious. Just remember to aim for the saddle left of Piz Sesvenna.

For the most part, the glacier is fairly flat. Only the very last few meters below the saddle with Foratrida are a somewhat steep, but even by late summer chances are that there is still some snow on the ice, making it much easier to ascend. In fact, if the snow is softened by the sun it's even possible without crampons (though still easier with - I tried both).

The nearest Swiss trailhead is at the small mountain hamlet of S-charl (±1810m). Hike up the dirt road into Val Sesvenna, direction northeast. The road ends at Alp Sesvenna (2098m). Continue east on a hiking trail, deeper into Val Sesvenna. The trail leads to the border at Fuorcla Sesvenna (2819m).

Looking down the Avigna Valley from Piz Sesvenna

The less scenic and longer southern approach avoids the glacier altogether. Starting in Taufers im Münstertal or in Müstair, head up the quiet Avigna valley. Right past a building at 2128m (46.68396°N / 10.4036°E), leave the valley floor to the right and follow a trail due north. Soon the vegetation gets sparse, and as the trail gets steeper it eventually gives way to scree and boulders. 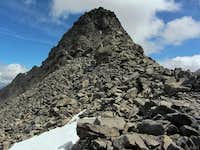 Foratrida from the saddle: a big pile of rocks
Fortunately there is a trail, for the ascent would be exhausting (and dangerous for your ankles) without it. If you come down this route, the trail is still the easiest way to go, because the scree is too big and uneven to run down safely. High up, the trail does not go straight to the saddle, but does in fact lead towards Foratrida, and tops out slightly east of the saddle, and a little higher. A short traverse on the southwestern slopes of Foratrida finally gets you to the saddle. Foratrida itself is just a big pile of loose rocks. Paint marks clearly show the route, and with all the people that have passed there already, most of the loose stuff has fallen down, but be careful if you go off route.

After Piz Sesvenna I wanted to climb Foratrida, but feeling the rocks slide away all around me as I was scrambling up convinced me that that wasn't such a good idea. I reckon that Foratrida is best climbed when there is sufficient snow to cement all the rocks in place.

From Taufers, a dirt road actually goes deep into the valley. I don't know how far up it's open to the public; if you do, please post an addition to this page. 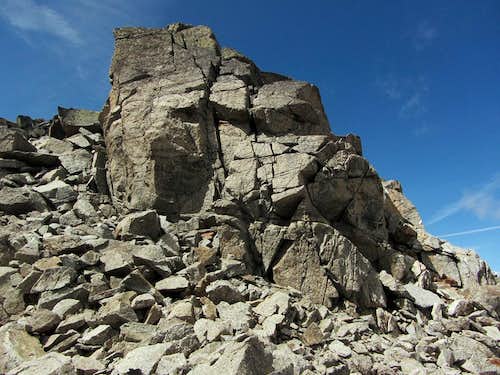 The impressive rock buttress near the base of the east ridge 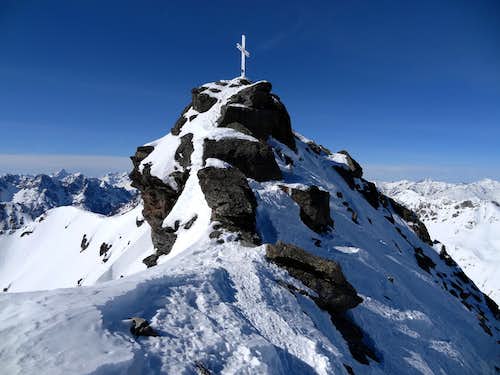 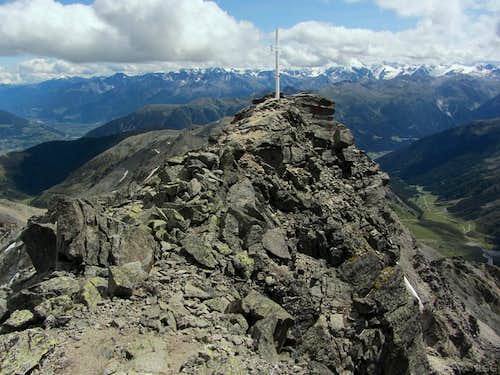 Winter and summer on the final meters
From the saddle with Foratrida, the butress near the base of the east ridge looks difficult. Red paint marks show the route. On getting closer it turns out that the route winds its way up on the right side of the buttress instead of tackling it directly, and it isn't nearly as hard as it appears - UIAA grade II.

Once above the buttress the ridge presents no real difficulties anymore and it isn't wide enough to get lost.

From the saddle to the summit and back takes less than an hour, but together with the approach, it will take most of the day. 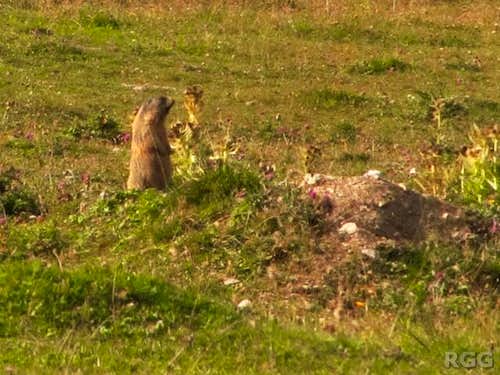 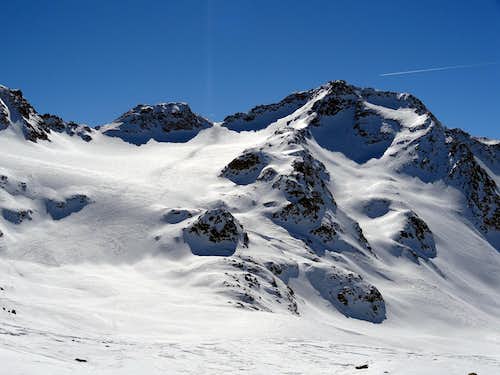 Winter landscape
Summer and early fall are best for hiking and scrambling, late winter and early spring for ski mountaineering.

For the northern approach crampons can be useful or even necessary. Glacier gear is often not required, but ask locally about current conditions before going unroped.

Glacier gear is normally not necessary.