East Side to Gunsight Notch

The North Peak of Seneca Rocks is the highest point, and the South Peak is reputed to be the highest peak east of the Black Hills accessible only by Class 5 climbing. Between the two of them is Gunsight Notch, aptly named and impressive to behold. When the time is right, photographers cluster here to capture a shot of the full moon rising behind the notch, but the notch is more than just a photographic subject.

Rock climbers who have been to Seneca Rocks are familiar with Gunsight Notch, and many know how to reach it in order to access some of the climbs, including the thrilling Gunsight to South Peak Direct route, rated as 5.4 but so exposed that one may get it in his head that it is much harder than that.

This route page is not so much for technical climbers, who shouldn't need it, but more for scramblers up for some exposed 5.0 who want to get off the trails and reach one of the most spectacular destinations of Seneca Rocks. Gunsight Notch proper is a thin, highly exposed fin with outstanding views of both peaks of Seneca Rocks-- the view of the South Peak might be one of the most dramatic scenes in all the East (see the sunrise sequence below)-- and of the surrounding area. It's also a great spot to hang out and watch climbers take on the harder routes of the eastern face of the South Peak.

Although I've read that Gunsight Notch can be accessed from the west side via some Class 5 ledges, the traditional approach seems to be from the east side, and that is the one covered here.

From the climber's parking lot, hike up Roy Gap Road for less than a mile until, after passing the Southeast Corner, you see a signed, blue-blazed trail on the left. This is the East Face Trail, which is rugged but no harder than Class 2 and ultimately leads to an observation deck just below the summit of the North Peak.

Follow this trail and, when you are just past Gunsight Notch, find a signed junction (use this photo and this one as locators). Scramble up some ledges here and begin traversing back left toward and past Gunsight Notch. When you see a large metal storage bin, scramble up more ledges, keeping above the bin, and eventually reach a long ledge set against the base of the East Face. Now head right and follow this ledge, known as Upper Broadway Ledge, until it ends just one steep and tight pitch below Gunsight Notch. Climb up to the notch (60-70'). This pitch is rated as 5.0. Climbing it is not much of an issue. Descending it unroped can feel a little unnerving because there is an exposed spot with a long, sketchy reach even for someone six feet tall. Note: for this last pitch, stay close to the wall; another option to the right at first looks a little easier and more obvious, but it becomes extremely exposed just at the place where a tricky move is required to get through.

In a guidebook I own, some of the moves to access the ledges mentioned are described as Class 5, but I felt they were Class 4 at the hardest.

One-way distance is less than two miles. Elevation gain is around 500'. 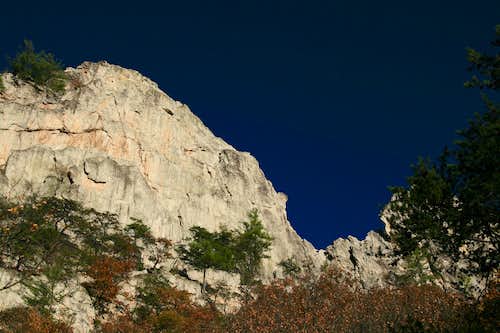 Each time I have been on this route, I have worn a helmet and rock shoes for the 5.0 pitch at the end. One could do it in hiking boots, but the rock shoes definitely help with the footing, especially on the downclimb. Bring a 60 m rope if you want to rappel down from the notch back to Upper Broadway Ledge.