The Spanish Peaks can be seen for many miles and have been used for for hundreds of years as a landmark by those passing through the area. The Ute and Comanche Indians called the mountains "Wahatoya" which means "Breasts of the Earth" or "Breasts of the World". According to Indian legend, the Spanish Peaks were where the rain gods dwelled and where clouds were born to bring the summer rains. This is a good site for history and geology of the area. Also check out http://www.spanishpeakscolorado.com/ for a more technical geological overview and description of the Spanish Peaks. (Thanks to Jon Bradford for this link)

Click on the above link and make note of the "dikes" which are described in detail. Once on the main road to the trailhead, you will pass by the largest dike in the area.

Highway 12 is the road that drives through La Veta. Take highway 12 to the south end of La Veta and turn east on Cuchara Street (La Veta Loco restaurant). Continue straight on Cuchara street past two side streets. Cuchara shortly turns south. Continue on this dirt road for 1.1 miles (south) until reaching an intersection with a sign that says "Huajatolla Valley". Turn left (east) at this sign and follow this dirt road for 5.4 miles as the road gradually turns south again. At 5.4 miles, begin looking for a sign on the right which says "Wahatoya Trail #1304". Turn right (west) and park about 50 yards up the road. This is the lower trailhead. If you have a 4WD vehicle, you can continue on this road for another two miles until reaching the upper trailhead. To continue to the summit, see the left side-bar or click here for the West Ridge route description.

East Spanish Peak is located in the Spanish Peaks Wilderness of the San Isabel National Forest. No permits are required to hike, climb, or camp. The wilderness area begins at the upper 4WD trailhead. No motorized vehicles, including bicyles in the wilderness. Pack animals are permitted.

As with most Colorado high peaks, June through September is considered the summer climbing season. Violent thunderstorms are a daily occurrence in summer. Plan to be off the summit or ridges by early afternoon to avoid lightning danger. Start very early (sunrise) and allow 7-9 hours for climb and descent.

There are several RV parks and commercial campgrounds located in La Veta. The La Veta Chamber of Commerce website is a good source for these campgrounds. The Elk Valley RV park is located one block from the road to the trailhead.

Once on the mountain, good campsites can be found along the road to the upper trailhead. Also, once on the trail, there are very good campsites located on the saddle between East and West Spanish Peaks. See the route description on the left side-bar for details.

Webcam of the Spanish Peaks. 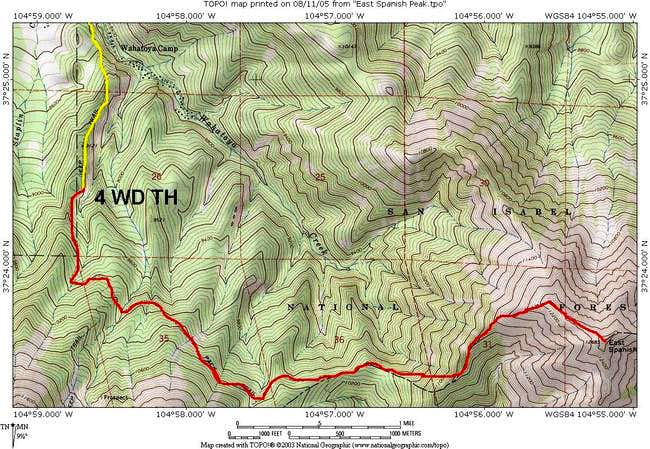 There was a 3.4 magnitude earthquake in the early morning hours of October 4, 2008. The epicenter was first marked as being 4.16 miles SW of Trinchera Peak.

It was later determined to be 12.3 miles SE of East Spanish Peak, or about 5 miles south of the town of Gulnare. No damage was reported, but it was felt in Gulnare and also Cuchara. (Info courtesy of billokc).

Alan, there was a 3.4 magnitude earthquake in the early morning hours of October 4, 2008. The epicenter was first marked as being 4.16 miles SW of Trinchera Peak. It was later determined to be 12.3 miles SE of East Spanish Peak, or about 5 miles south of the town of Gulnare. No damage was reported, but it was felt in Gulnare and also Cuchara. I wanted to pass this to you on the chance you might want to post it on the ESP page. Thanks, Bill.

Re: Earthquake SE of ESP

Thanks for the info! I posted it on the page. When you gonna get out there and climb ESP? AE

Yup. It goes down periodically.

Alan, First, your driving directions were spot-on and enabled us to reach a bomber campsite along the 4x4 road in the pitch dark at 10:00 PM (well, minus an operator-error that led us into Wahatoya Camp first...) RE: Take highway 12 to the south end of La Veta and locate the La Veta Sports Pub & Grub on the east side of Highway 12. Minor note, but as a courtesy, please be aware that this pub is closed down - it's just a brown, shuttered structure now. You may wish to update your driving directions to reflect this. Cheers, Sarah

I was able to drive all the way up to the trailhead in my stock Jeep Rubicon. As soon as you turn off the main road (360), there is a deep and eroded rut in the jeep road. Would be very easy to slip into that and get stuck. So if you don't have a good four-wheel-drive forget about driving any distance up this road. As for the hiking part of the route, there is again a sign on the wooden post at the saddle. An arrow points to the East Peak Trail. Take that trail and within a few moments you'll reach a camping area. The trail picks up on the other side of the camping area and continues on. You lose a bit of elevation but after awhile you start climbing in earnest. Now, I was curious about an earlier comment that described an alternate and better trail going up the mountain. However the description of this was rather vague so I didn't know where or how to find it. Well, I figured it out. Because I came to a spot where there used to be a fork in the trail. The left fork goes up steeply toward the crest of the ridge. But now that branch of the trail is covered (apparently intentionally) with a bunch of deadfall. So the obvious way to go is on the constructed trail...which is the one I'd read about here. This trail stays below the ridge crest for much of the way up to treeline, with occasional switchbacks. As you get close to treeline it more or less follows the ridge crest. And along this stretch at times it gets a little faint, but just keep going along and you'll come across a cairn or see the trail. As you emerge above treeline, at first things look promising. Because initially there's a clear trail, going up the scree on the right side of the ridge, and you can see some big cairns. But pretty soon, the trail starts braiding and it becomes difficult to follow. I just kind of kept following these braids and eventually they led up to the ridge crest. From that point you just follow the ridge crest to the summit.

Re Camping at the TH

The parking area at the trailhead (at the top of the 4WD road) is very rocky and generally at a 15+ degree slope. I sleep in my vehicle, and I was able to wedge it into a spot between a tree and the big fire ring there. In that spot the slope was a little less, and I was able to get it level side-to-side. But the vehicle was definitely still in a nose-up attitude. There is a little space in the trees that is not so rocky but is still sloped. There was a spot on the edge of the parking area which has been worked into a smallish tent platform and is fairly level.