Summary of the Hike

On March 21, 2015, I hiked to the summit of Echo Mountain from the Sam Merrill trail in Pasadena, California.
This hike is definitely not appropriate for one looking for a true wilderness experience.  Despite leaving the trailhead around 6:30 am, the traffic on the trail made me feel like I was on the 5, 10, 110, or one of the many other similar congested freeways in the Los Angeles area.  Nor is the hike difficult or challenging even for one in as bad a shape as me.  For true mountaineers, the entire hike (to the top and back) could probably be done in well under 2 hours, and for those even more foolish, err hardy, souls, the trip probably takes less well under one hour.  And, indeed, I saw many trail runners on the hike, with LA Marathon shirts common.
Despite these drawbacks, the hike was still quite enjoyable.  The views to the South were beautiful with fog covering the San Gabriel Valley and the City of Los Angeles, and made it easier to forget that 10,000,000 people were living in the megalopolis below.  And it is great to be able to go on any hike in late March that is only a 15-minute drive from home.  The views of the San Gabriel mountains were equally inspiring, and made me want to continue up to the aptly-named Inspiration Point and Mt. Lowe and beyond.  Alas, I had to return home for family duties, and had not brought sufficient water to continue in any event.  But I hope to come back and climb to the top of Mt. Lowe using this route -- if not this year, as it will soon be getting too hot to do these low-altitude hikes, in one of the years to come.

Along with a few others, I headed from the end of Lake street to the trail located next to the gate.  A sign, helpfully covered in graffiti, explained that I had 2.5 miles to go. 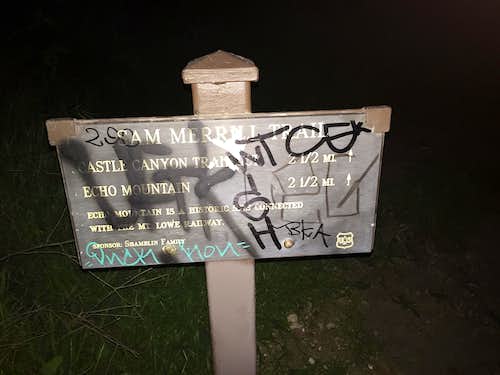 Echo Mountain trailhead
The trail was beautiful in the early morning light, winding through some grass and trees before entering the ubiquitous chaparral that covers all of the lower slopes of Southern California's non-desert mountains.  Echo Mountain itself is not tall enough to get out of the chaparral, although the vegetation gradually become somewhat more lush toward the top.  The round summit of Echo mountain was prominent, standing to the left of some power lines heading up the mountains. 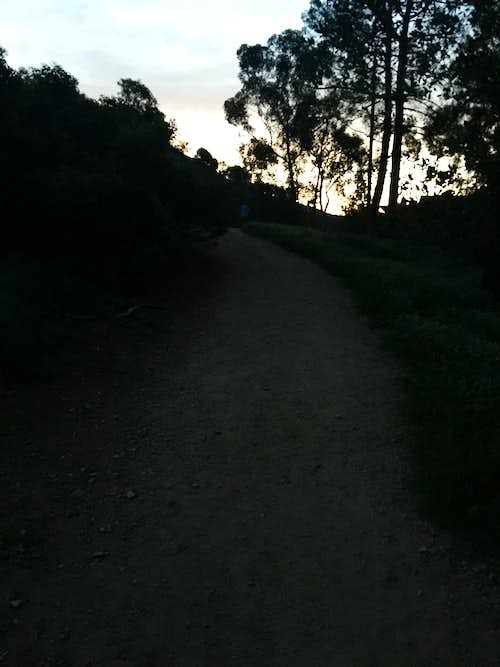 Beginning of the trail to Echo Mountain 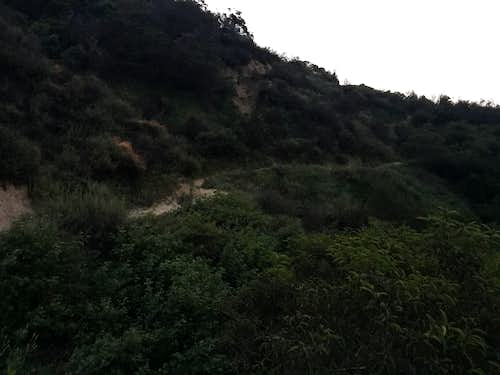 Early portion of the Echo Mountain trail
Shortly into the hike, beautiful views to the south began opening up.  On the day I did the hike, the valley was covered with a think fog.  The hike itself started out just above the fog.  The views of Altadena, with Pasadena and the San Gabriel valley to the South were sublime in the early morning light. 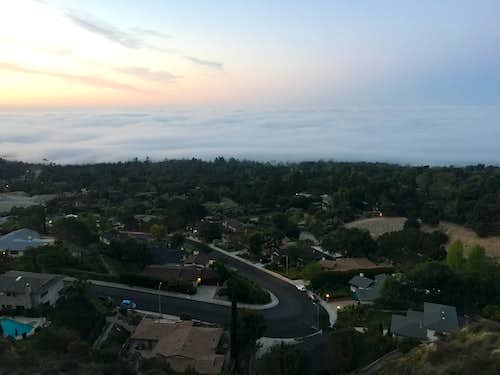 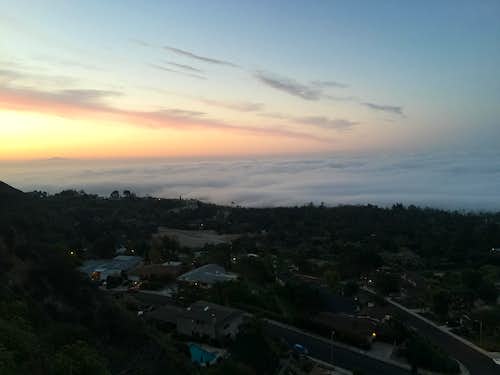 Another picture of Altadena and fog, from Echo Mountain Trail 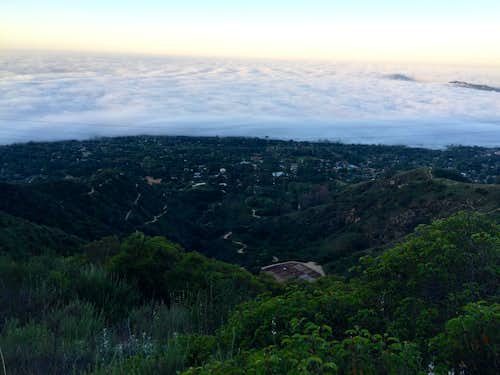 Fog over the San Gabriel Valley and Los Angeles
About halfway up, I encountered a set of power lines going up the hillside, even passing directly next to one (which a few other hikers found a pleasant place to take a short breather).  The power lines reinforced the fact that this trail was not in pristine wilderness, but also helped one appreciate that beauty could be found right next to such a big city as Los Angeles. 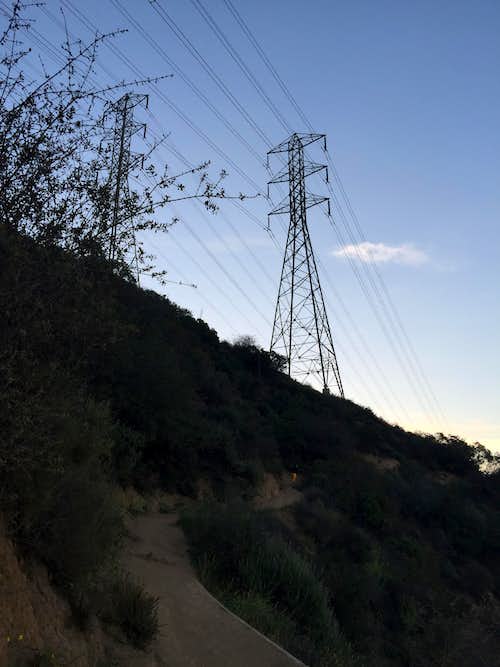 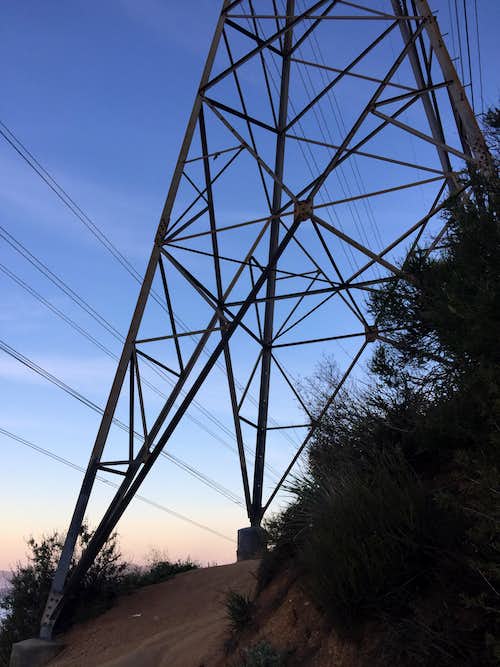 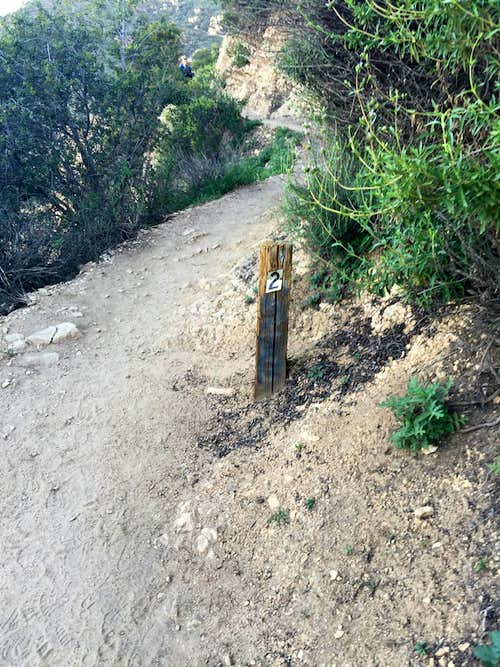 Mileage Marker
Shortly after the power lines, a mileage post helpfully explained that I now had now finished two miles.  Just a half-mile to go!
Near the top, a number of trails wandered off in various directions, and I got slightly confused as to which way to go.  Although there were a number of signs, they were largely covered in rust or otherwise hard to make out.  Eventually, I found one leading the way, and shortly thereafter found myself on top of Echo Mountain. 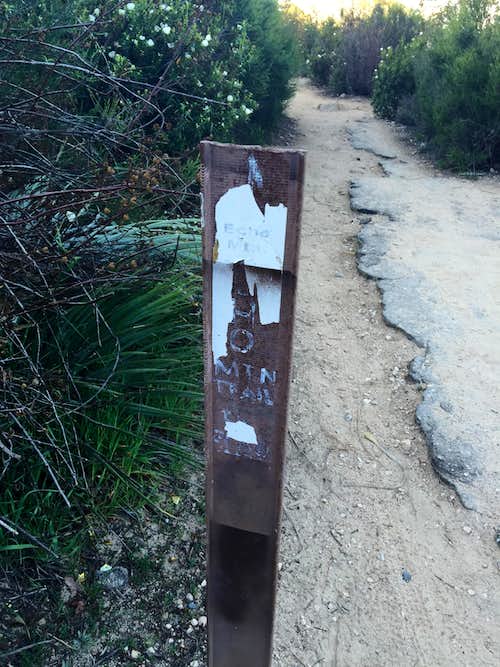 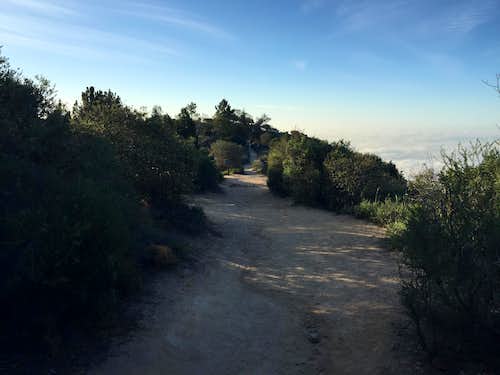 Top of Echo Mountain
As explained on Augie Medina's excellent page on Echo Mountain (and which I won't repeat the details here), in the early Twentieth Century a railroad led to the top of the mountain, where hotels, tennis courts, and other pleasures awaited rich early Angelinos. 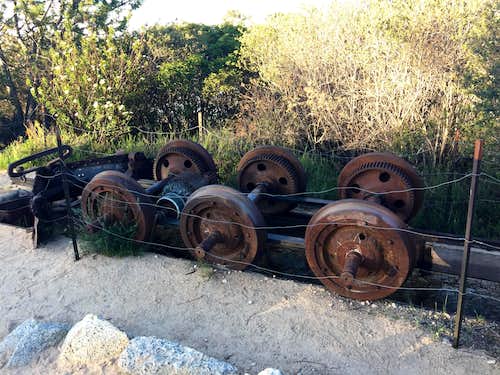 Ruins of the Mt. Lowe railroad 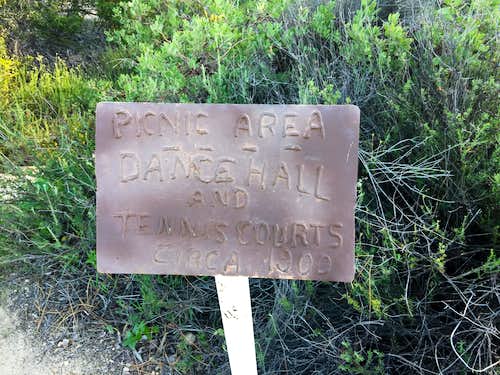 There were tennis courts here in 1900 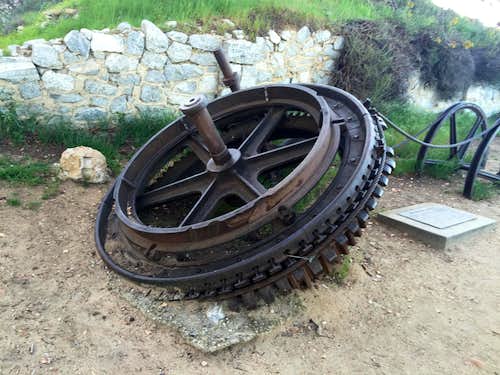 Mt. Lowe railway ruins
Views from the top were, as expected, superb.  I particularly enjoyed the view of Mt. Lowe and Inspiration Point to the north.  I hadn't expected to want to do this hike in the future, but now it is near the top of my list, at least for next winter when the higher reaches of the San Gabriels will likely be snow-covered -- hopefully with more snow than they have enjoyed the past three years! 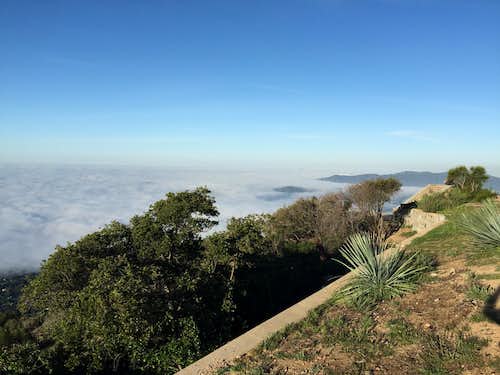 View from the summit of Echo Mountain 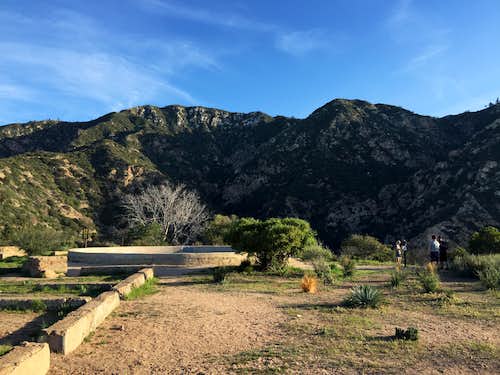 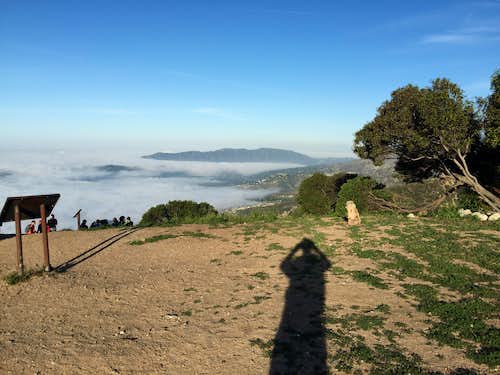 View from the summit of Echo Mountain
By 8:00 am, it was time to head back down.  Inspired by all the trail runners, I did a bit -- a very small bit, mind you -- of jogging down the trail myself.  While hiking upward to Inspiration Point would have been fun, my 2 and almost 4 year old kids and wife needed me.  It's tough to find time to hike with work and family so pressing, and I'm grateful I was able to enjoy this hike for what it was -- an urban but still beautiful hike into the lower reaches of the front ranges of the San Gabriels, with excellent views of the valleys below and larger peaks above.  Certainly much more enjoyable than hitting the gym!