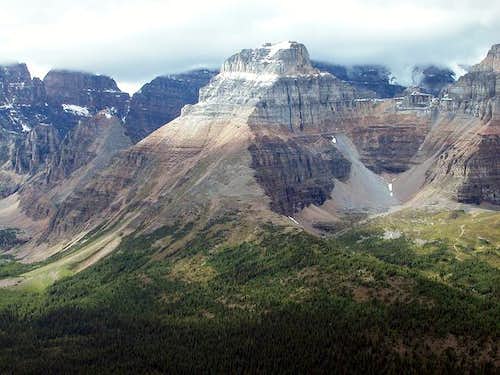 An alternative to nearby Temple. While this should be a popular alternative it is often over looked by those intent on the big one to the north-east. The views from this scramble are well worth the 4-5 hour effort. Eiffel Tower, Paradise Valley, The Valley of the Ten Peaks, Mount Temple, The Mitre, are just a few of surrounding peaks and valleys that you have good view of from the summit.

A 70 m pillar just behind it to the west called Eiffel tower is a challenging rock climb. This tower section was first climbed in 1951 and according to Alan Kane’s Scrambles in the Canadian Rockies was climbed again in 1952 and since then largely ignored. 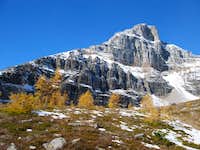 You will have to get yourself to Lake Louise. From Calgary take the Trans Canada (1) west through Canmore, Banff to Lake Louise then take the road to Moraine Lake. Note you should get there early as the parking lot is not very large and tends to fill up early. The trail head is found 100 yards along the lake to the right. Follow the obvious trail up the switchbacks up to Larch Valley. Then once you have passed the trees at the point where you will find two benches, turn left away from the crowd that is headed to Sentinal pass and Temple and decend to a small rocky stream and ascend the skyline ridge. Follow the ridge along broken rocks and scree till you find an obvious trail the at winds its way to the summit. There are a couple of rock bands but nothing in the way of great difficulty. This is an excellent half day of hiking/scrambling. 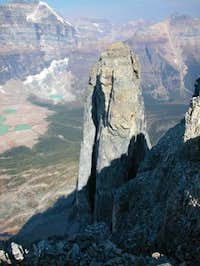 Image above is Eiffel Tower which is found just to the north behind the summit of Eiffel peak.

You will need a Parks pass. This can be picked up as you enter the Park on the highway near Banff.

One other item of note. Due to bear activity, to go up from the parking lot to the point where you head left towards Eiffel. You now have to travel in groupes of 6 or more. Wait at the trail head for the correct amount of people and then proceed as a group. You have to do the same at the benches upon your return. This may seen like a hassle but there are so many people that groups are formed easily and everyone is aware of the rule. One thing is try and ensure that everone is of the approximate level of speed and fitness as the groups will break up on the way up or down and you could be hassled or even fined by the park personal. 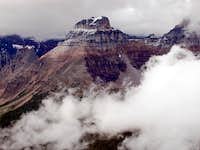 The summer months are the most popular. This route and many others are well described in the guidebook Scrambles in the Canadian Rockies by Alan Kane.

There is no camping allowed in this area. But there are many campsites in the Lake Louise area. One place that is recommended is the ACC/Hostel in Lake Louise. This place has a small cosy restaurent with good food as well as kitchen facilities and lots of room for approx 36$ Canadian a night. While this is twice as much as the ACC lodge in Canmore it is still a bargin when compaired to the cost of hotels in the area. 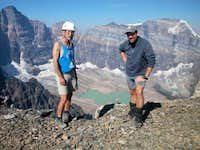 Check with the Rangers in Lake Louise. You can sign in and out (probably wise to do so.. but remember to sign out!) Beware of the the weather conditions and dress accordingly. If the weather turns trails can ice up and people can get into trouble because they went up in nice weather then the slabs and scree iced up in the snow or rain and made the route very dicy for the decent. Excellent conditioning hike.