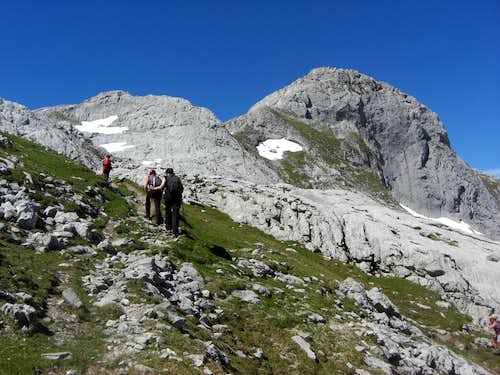 You will rarely find a summit named after a cheese. El Requezon, also named El Requexon, is such a rare summit. The Requezon is a sort of ricotta cheese made in northern Spain. It is said that the summit has the shape of that cheese. Having climbed this nice summit and having eaten the cheese, too, I must admit, that this coincidental naming is rather farfetched. But I must state: the cheese tastes very good. The summit is great, too.

What is more important: El Requezon is a very interesting outing in the western part of the Picos de Europa, the so called “Macizo Occidental” or “de Cornion”. By far not one of the highest peaks of this range, El Requezon offers nevertheless great views to the north, west and south. The main ridge of the Macizo Occidental is just east of the summit, a monumental scenery.

El Requezon is the highest peak of the east – west running ridge, which starts at Collau (or Collada) Les Merines, a col separating this ridge from the main ridge of the Macizo Occidental, and ends at the famous Mirador de Ordiales, where Pedro Pidal, the Marques de Villaviciosa and the founder of the Picos de Europa National Park, was buried. Our summit has a massive and steep north face, which hosts some attractive trad climbing routes, and an even steeper and higher south face, looking down on Valle Ozania. As the other peaks of this ridge are not very difficult to climb, El Requezon can be the end or beginning of a full traverse from Les Merines to Mirador des Ordiales with fine scrambling in good limestone which never exceeds UIAA grade II (one part) but is in parts airy.

My day on the ricotta mountain was a very stormy one. We had difficulties to stand upright on the east ridge, climbing up the summit. So I abandoned the idea of the full traverse.

But I must admit: El Requezon is a pleasant outing in the western part of the Picos even without a full traverse. 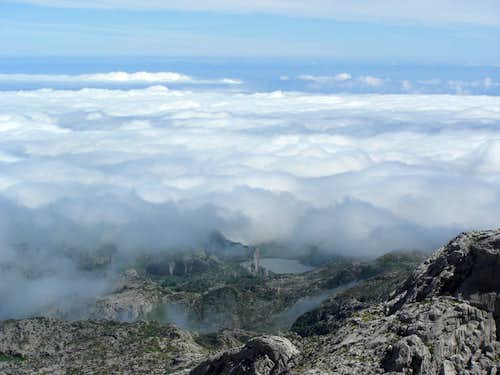 The best trailhead for El Requezon is Lago de Enol in the northern part of Macizo Occidental.

At Soto de Cangas take AS 262 to Covadonga. In high season (july and august) you have to take shuttle busses to Lago de Enol, starting at the huge parking areas of Covadonga. During the rest of the year it is allowed (june 2012) to go up to Lago Enol by car (road number CO-4). 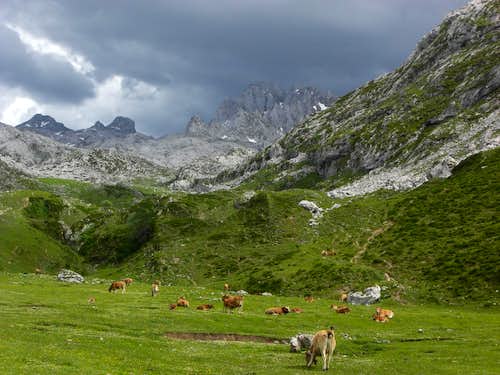 During high season the trailhead is at Collau les Valeres, the col just before the road descends to Lago de Enol. Walk the dirt road branching off to the right, which descends, too, to Lago de Enol and circles round this beautiful lake on its western side. Proceed on that road until you reach the location Pandecarmen, passing by Refugio Cabaña de Pastores and the Majadas of Vega de Enol and Vega la Cueva (about 1 h).

During low season with no traffic restriction cars are allowed on that dirt road, too (june 2012). Follow the road until you reach the parking area of Pandecarmen at the barrier and near Mirador del Rey. Watch out for bumps, holes and gullys, the road isn´t very well maintained.

From Pandecarmen parking area follow the dirt road in southern direction, passing through the beautiful meadow of Vega el Huerto and crossing a little creek on a broad bridge (Ponte Redimuña).

Ascend on that road and after its end on a trail to Vega la Piedra.

Continue on an old road or by ascending the meadows to Vega de Canraso which is traversed from right to left. Ascend to the Majadas of La Rondiella and to the Refugio de Vegarredonda.

Above the hut is an important trail junction.

At the trail junction follow the indication “Jou Santu / Fuente Prieta” on a trail heading south into a steep valley below the peaks of Cuesta and Torres de Cebolleda (Llampa Cimera), passing by the trail junction with the Refugio d´Ario trail, which branches off to the left and the old Vegarredonda hut on your right.
Ascend that valley on a good trail until you reach another trail junction. The left hand trail goes to Jou Santu and to Peña Santa de Castilla. Take the right hand trail and follow it up to the meadow col of Les Merines at the beginning of Cuesta la Cebolleda with great views.

At Les Merines leave the trail to the right (west) and descend off-trail the slabs and easy rocks down to an obvious col east of the already visible El Requezon. It is the lowest point of the El Requezon east ridge. You reach that col, too, by leaving the trail to Les Merines a bit further down with an off-trail traverse of karst – eroded terrain. A no-go area with foggy weather!

Follow then the east ridge crest up to a rock peak just in front of the summit block. Traverse that rock peak on its south (left hand) side on easy terrain (foot tracks and some cairns) and gain the notch between the peak and the summit block.

Climb the summit block first right of the ridge crest then passing on the ridge crest with the help of a small ledge; the first part is exposed UIAA grade I scramble in excellent limestone, the second half is easy scramble and walking on talus and scree terrain.

It is a great traverse in the Mazico Occidental west part with UIAA grade I and II - climbs.

From Refugio de Vegarredonda trail junction take the right hand trail to Ordiales. Traverse to a rock chute (Cuenye Cerrada). Ascend the chute on a good and yellow-white marked trail to a col (El Horcau). Descend a bit into a karst pit (Campos de Torga) and start the long traverse of the karst plateau in several ups and downs on this marked trail until you reach unguarded Refugio de Ordiales.

Pico de Cotalba is located south of the Refugio. There are several possibilities to scramble up that summit, they do not exceed UIAA grade I. See the Pico de Cotalba SP site for further information. You can start right from the hut or follow the trail up to Mirador des Ordiales, a phantastic lookout with the tomb of Pedro Pidal, Marques de Villaviciosa, the “father” of the Picos de Europa National Park (a visit of the Mirador is a must).

Robin Walker describes the traverse as follows: from the summit follow the easy ridge crest to Collada Santa Maria and Tiro de la Canal Vaquera (I) and to the Horcada del Poyo (obviously also named Horcada Vaquera). Traverse below the towers of the Tres Poyones (I+) to the Horcada Ancha (or Horcada Requexon), west of El Requezon. Right of the Horcada is a gully, which leads to the summit and needs grade II climbing.

I had a look down the summit west ridge to find this gully but wasn´t sure about the route from the Horcada Ancha up to El Requezon. Maybe it is more obvious when traversing from Cotalba to El Requezon. The heavy storm gusts prevented more investigation on that topic. Maybe our Spanish friends want to add the traverse as a route………..

Addition of august, 2017:
User damgaard made the following addition on the traverse (Thanks for this!!):

"When doing the traverse from the Mirador Ordiales finding the last way up to the summit of Requezon is a bit tricky. From 3rd Ponyon go right around Requezon. The way here is obvious and there are some cairns. The easy part ends at a gully leading to the summit of Requezon. There is some overhanging rocks on the right side of the gully. This is NOT the right way! Go back 5-10 meters and ascend another steep gully/chimney. It is not too difficult (II) but quite exposed. You pass a rappel anchor after 10 meters of so. After this things are easy."

Robin Walker (see Maps & Guide Books section) states, that there is one good climb in the north face (direct route) with scope for another up the blank central section. The north face route is rated UIAA grade IV to V.
You reach the bottom of the north face, called Jou de Requezon, best by ascending the trail to Les Merines and leave the trail at about 1900 m height. Ascend the karst plateau and slopes to reach the west edge of Jou de Requezon. The direct route is described as number 137 in the guide book. 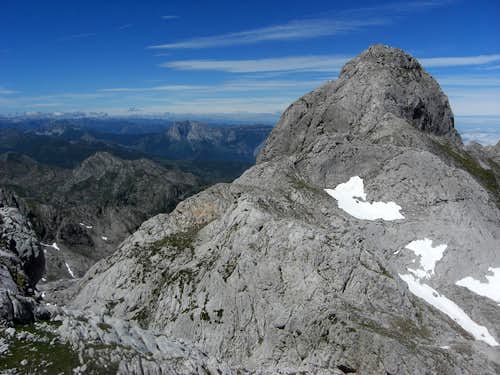 El Requezon is part of the Parque Nacional de Picos de Europa. The entrance is free. I did not see any special restrictions for visitors and even the official internet site does not show any.

Tents are allowed in the National Park above 1.600 m height one hour before sunset until one hour after sunrise.

The road between Covadonga and Lago de Enol / Lago d´Ercina is closed in high season; use the shuttle bus service.

Hotels, holyday houses (self catering) and campgrounds can be found around and in Cangas de Onis.

Refugio de Ordiales is an open and unguarded shelter, which offers some bunk beds, a table and a stove. During my visit in june 2012 the interior was in a rather bad and uncomfortable shape.

El Requezon is mainly a late spring to late autumn / early to high winter summit, depending on the snow conditions. As El Requezon is not among the highest peaks of the Macizo de Cornion, the snow should be gone with the month of may / june.

The normal route and the traverse needs full hiking gear and the ability to cope with UIAA grad I to II rock.

The trad climbing routes need full climbing gear (UIAA grade IV to V).
As all the routes are partly off-trail watch out for sudden bad weather and dense fogs.

The best map for mountaieers of the region I know.