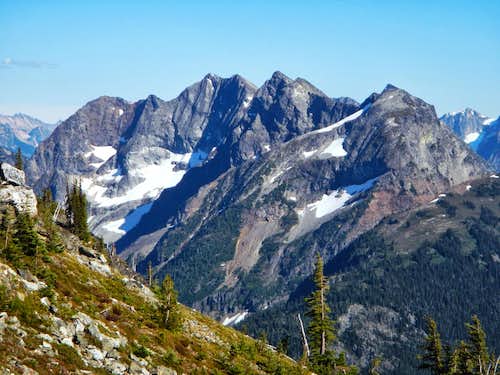 Elija Ridge Viewed From The West
Elija Ridge is a 4 mile long east/west trending mountain with numerous high points along it's upper ridge crest.  The mountain was named after the religious historic figure Elijah who is recognized by Jewish, Christian, and Muslim faiths.  It located inside the North Cascades National Park, south of Highway 20.  The southern flank of the mountain is bordered by Panther Creek and Gabriel Creek while the northern base is traced by Stillwell Creek. There are several small glacier remnants on the upper north facing slopes, below a large headwall. One of the major sub-peaks east of the summit carries enough prominence to qualify as it's own peak and this has been unofficially named Ezekiel Peak. 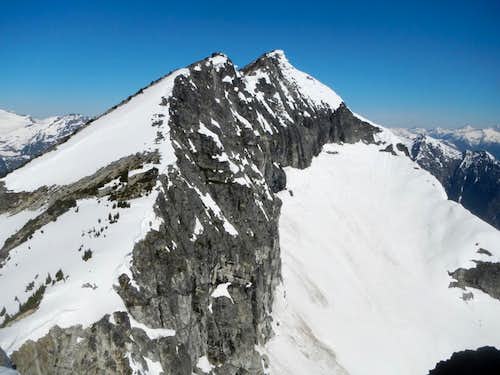 Elija Ridge Viewed From The East
Accessing Elija Ridge is not easy. There are no trails on the mountain and the Panther Creek trail which is suggested by the Beckey guide has been reported to be an excessively brushy route. The two main approach routes which have proven effective make use of Cabinet Creek and County Line Creek. The County Line Creek route passes over Mebee Point and follows the ridge, but it will not be further described here. See the route section below for more information on the standard Cabinet Creek approach.

Elija ridge Summit Panorama North
Elija Ridge sees very few ascents. In all likelihood, it has been climbed less than 50 times. Because of the lack of information (until today) and the isolated location of this peak, only a few folks have ventured up there. Several of the people go for one reason only and that is the Washington P2k list. Elija is just a hair over the 2000 feet of prominence mark and neighboring Gabriel peak is just under, so it sees even less visitors.

This trip will take 2 days for Elija and perhaps one other peak, but if you wish to get Gabriel, Mebee, Beebe, and Tarheel, I suggest budgeting 3 days. To get to the start of Cabinet Creek, park at the pullout on the north side of Highway 20 which has the "Crater Mountain" sign. 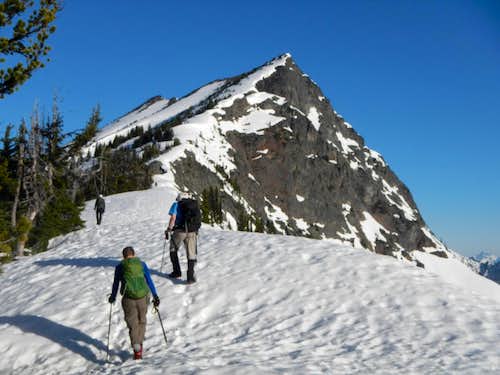 Eastern Ridge Crest
Walk along the road to the southeast being careful of passing cars. After a few tenths of a mile you will hear Cabinet Creek on the south side of the highway. Don't plan on following the east side of the creek unless you fancy river fords. 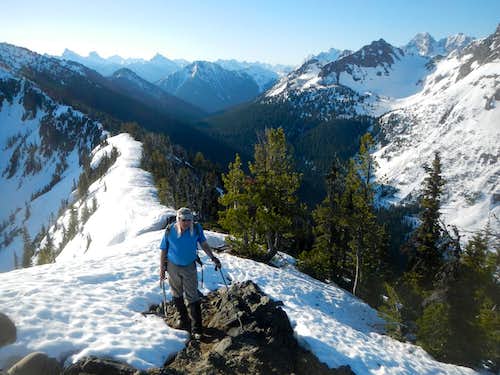 Above the saddle
Enter the brush and follow the west side of the creek a short distance to a feeder stream. On the far side of the stream ascend a forested ridge for several hundred feet and then begin the traverse, always staying above the creek to a point which allows the easiest travel through sometimes dense forest. Near the creek are more blow down trees and other obstacles. 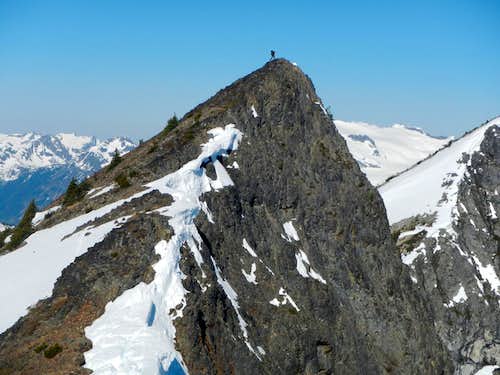 Ezekiel Peak
Continue around the south side of Mebee Point and along the creek, now to the northwest. Good camping can be found at the pass between the Cabinet Creek and the Panther Creek drainages. 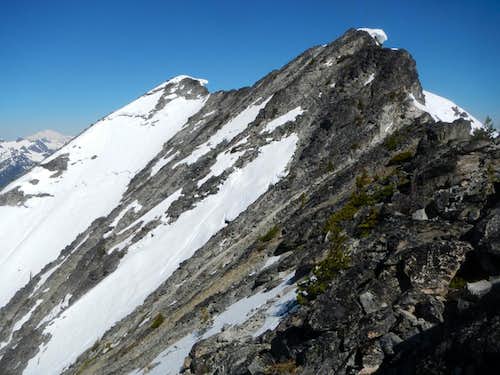 Summit Finally Visible
From camp at the pass, traverse westward, at first on a level grade, and then increasing the angle of ascent to finally reach the pass between Elija Ridge and Tarheel Peak. Beware of minor cliffs in the vicinity of the pass. There's a good gully leading right up to the low point. 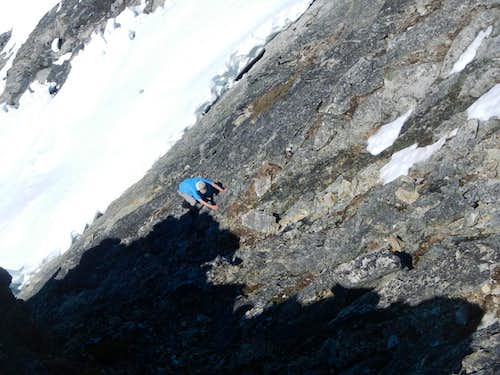 Steep Slabs Below The Summit
From the pass follow the ridge west, either over, or around numerous high points. It's worth visiting Ezekiel Peak along the way, for an excellent view. 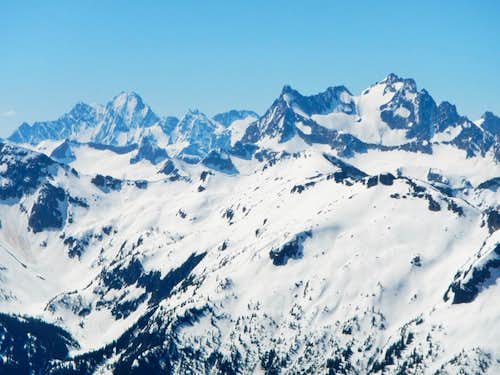 Goode Mountain and Mount Logan View
From the final notch in the ridge you must first ascent a steep slope and then traverse on down-sloping rock or scramble a narrow exposed portion of ridge to reach the summit. Both options carry some degree of risk and conditions may vary widely depending on the amount of snow present.

Park at the turnoff on the north side of Highway 20 which has a sign that says "Crater Mountain". This is located 48.9 miles east of the Rockport junction and 46 miles west of the downtown Winthrop highway bridge.

Having trekked along both sides of the creek, my personal preference is the eastern side over the western side, but to each their own. Here are the pros and cons of each side, from my perspective: Cabinet Creek, eastern side: PROS: Generally, a gradually rising traverse through semi-open forest, minimal brush and few (if any) downed trees to go over or around, a faint path appears from time to time. No routefinding issues at all. If you keep the creek basically within view and/or earshot, you should be OK. CONS: Cabinet Creek has to be crossed at some point. It might be best to do so when the smaller tributaries join near ~4500' elevation. My team crossed two streams, the first being a gentle sand bar section at 4500' that was only 1' deep, and the second being a log crossing over the main Cabinet Creek. Neither crossing was trivial. Cabinet Creek, western side: PROS: The entire team took this side during the descent, and the travel went quicker than I would have expected (but, again, we were descending). Plus, there were no crossing of any major creeks, only a few tiny seasonal streams. I really enjoyed seeing the old encampment just below 4000' elevation, which had an actual cabinet; I called it the "Cabinet of Cabinet Creek." CONS: There is a lot of brush, a lot of downed trees, a lot of ups and downs, and some steep ribs along this side. Sometimes we were near Cabinet Creek, sometimes we were only within earshot of it, and sometimes we could not hear it at all. Even the person leading the team down this side lost his own (ascent) route from time to time (although, generally, the descent plan is to continue losing elevation while staying on that side of the creek). There is a short slide alder section in which you would want to find a good spot to cross. Neither side of the creek is technical, and either side works. The key is to be safe, have fun, and not get lost. This is a great area of the North Cascades to explore.