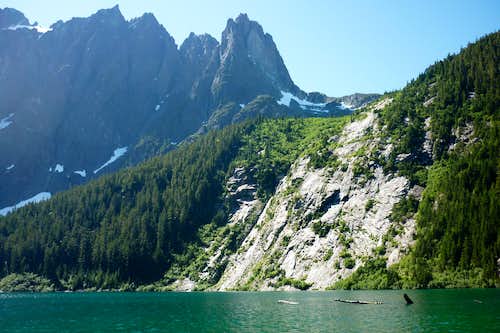 This was a trip I did in 2011. Being from Gold River I am surprised that this was my first trip to Landslide Lake. It is an easy hike with minimal elevation gain, which makes it easier for new hikers. To get to the trailhead we drove on Hwy 28 towards Gold River. On the left hand side of the road, about 5-10mins past Lady Falls, there is an obvious sign for the trailhead. In total the hike is about 11kms in length to Landslide Lake and gains about 600m in elevation. 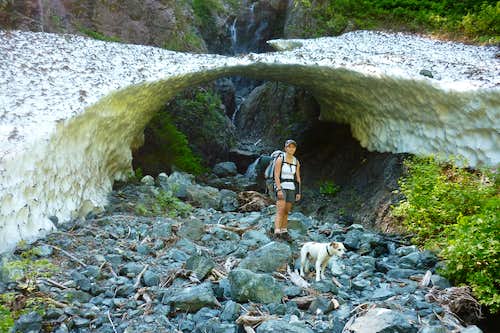 Snow on the ERT

We started the hike by about 0900. The start of the trail had a small incline and took us under power lines. Most of the trail weaved along the Elk River through beautiful old growth forest. There were two campsites along the way and we decided to camp at the one closest to Landslide Lake, which we arrived at around 1130. We hauled off our bags, set up a tent, and had a quick snack before carrying on to the lake. 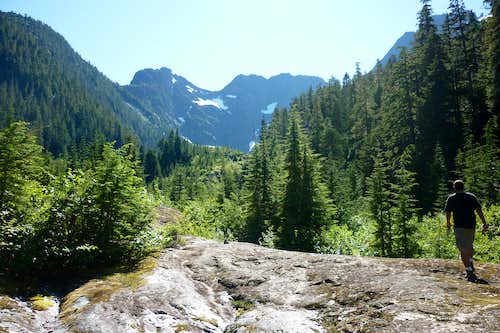 Walking up the old landslide

The remainder of the hike to Landslide Lake followed what we could obviously tell was the old slide. As you can see in the picture above there is a lot of exposed rock with only small trees growing. There was a bridge to the east side of the river and the trail continued on this side until we reached the lake at 1300. 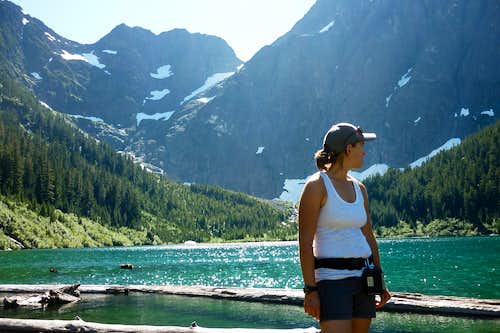 Landslide lake is a beautiful light blue colour and is full of many old logs, which are fun to walk out on and dip feet over. The lake is at the base of the mighty Mt Colonel Foster and it is easy to see how the lake got its name. There is a vary obvious chunk missing from the north side of Mt Colonel Foster and a slide path all the way down into the lake. I bet it looks cool from an arial view.
It was a hot sunny day and I wanted so badly to swim around in the lake, but boy was that water cold! I jumped in a couple times and got brain freeze immediately as I quickly swam over to various logs. We probably spent around 1.5hrs here before heading back to camp. 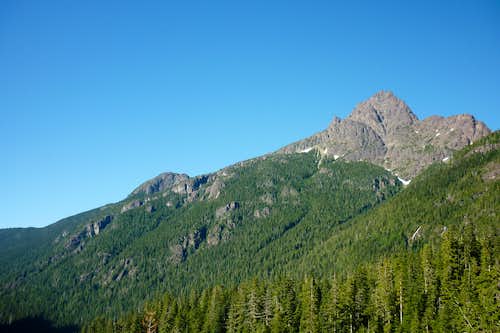 View of Elkhorn and Kings Peak while leaving Landslide Lake

Before we headed back to camp I took a picture, as seen above, of Elkhorn and Kings Peak. The trip back to our tent was much faster then the way up.
That night we hung out by the river and relaxed after a solid day of hiking. We met another group of three ladies that had also done the same hike and chatted with them for quite a while. They loved our dog and had some great hiking ideas. Later in the evening, just before it became dusky, a man passed by on the way to his tent. He had just summited Elkhorn! Back then I had no idea what a feat this was. I had no clue it was the second highest peak on the island... Looking back I wish that I had asked him more questions. All I remember is that he said it was a bit of a bush-whack, but he laid out flagging, and that he did it as a day trip from his camp at the Elk River Trail... Impressive. 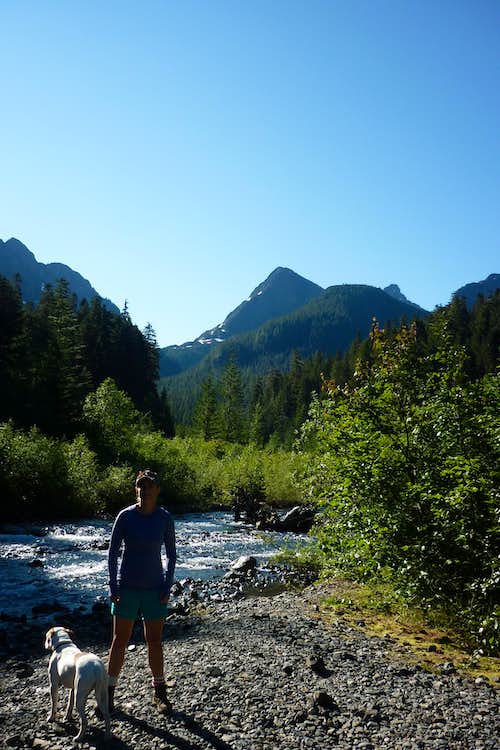 Morning view from our camp

The next morning we took our time to wake up and pack. We took in the amazing views one last time and headed back down the trail towards civilization. I am disappointed with myself for not doing this hike much sooner!