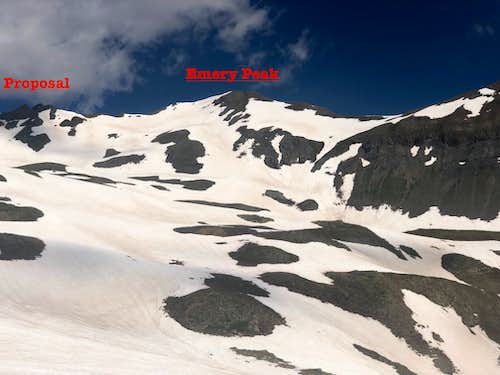 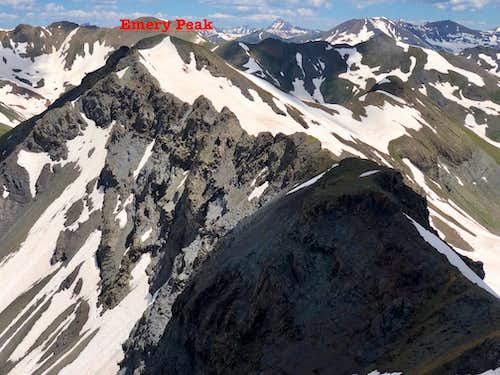 Emery Peak from the summit of Proposal Peak
Emery Peak is an unranked summit in San Juan Mountains, near the historic town of Silverton. It is unranked because its prominence is less than 300 feet. It combines nicely with a ranked 13er "Proposal Peak" 13,330 feet (only 20 feet higher). I chose to make a separate page for it because it is named on maps and also because the ridge between "Proposal" and Emery is very hard, consisting of loose rock towers with  4th and 5th class moves. Most people descend below this ridge and traverse over from Proposal Peak.

Class: List of John gives it 3, I thought is was easier.

From the historic town of Silverton drive to Eureka. This section of the road is nice and passable for any vehicles, dirt, but flat.The distance from Silverton to Eureka is about 8 miles. There is not much in Eureka, campground and Eureka lodge higher up and below the road.

4WD road from Eureka - you do need high clearance 4WD vehicles above Eureka. The main road goes to Animas Forks and high mountain passes: Engineer and Cinnamon. The area is very popular with ATVs and jeeps in the summer. The road for Emery accessing Emery Peak (also Proposal and Hanson Peak) turns off to the left about 1/2 mile above Eureka and goes through switchbacks and ascends through forest. It goes to a drained Emma Lake (the whole lake drained into mines). As mentioned below, I was not able to drive very high since there was avalanche debris blocking the road. 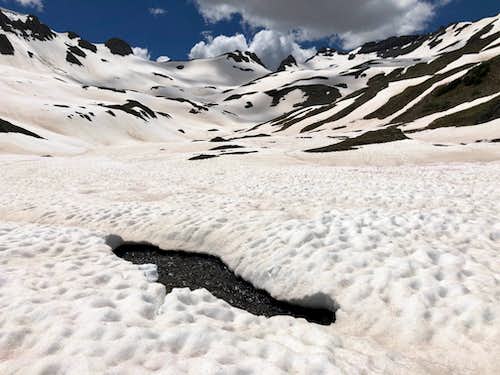 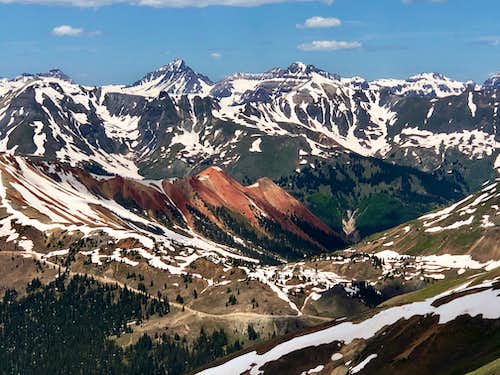 Mount Sneffels as seen from the summit of Emery
I chose to approach via McCarty Basin. "Proposal" and Emery were the last 2 peaks for me to finish this area and Handies quadrangle. Typically, one drive all the way to the turn off for McCarty Basin, but 2019 spring was rich with snow and there was an avalanche path blocking the road about 1 mile above Eureka.
I tried to choose the least difficult path. Since McCarty Basin was completely snow filled, I was not able to tell whether there are any trails there or not. The snow field lead all the way to the ridge between Proposal and Emery and past the technical difficulties. It did not seem that steep. I never used my ice axe, only hiking poles and crampons. There was a large cornice nearing the ridge, but it was easy to bypass. The summit is large and grassy. I rebuild the cairn. There was no summit register (2019).

There are no fees to drive 4 WD roads, park and hike.

Summer is obviously the easiest time, early fall would be great too. Winter means a longer access (the road is usually snow plowed to Eureka) and high avalanche danger. Spring in stable conditions may be good as well and approach on skis. McCarty Basin looks like a nice place for skiing, but always check avalanche conditions!

If snow free, McCarty Basin would be a great place to backpack. There are many developed camping areas in Silverton area. Eureka is the closest one. Click here for more information.