Parked at the Cougar Canyon park lot. This time of year(early June), you may have to cross the stream 5-6 times on various wet slippery rock crossings as the trail goes from side to side. Expect to get toes wet. After about 45 min to 1 hour depending on stream crossings, see a cairn on the left side just before a big bend in the river. A faint trail leads up the side of a lightly treed ridge. Lots of ticks as this is prime sheep habitat.

We went along close to the crest (left side) of ridge on various trails for about 1 hour for about 500 m. until hit first rock band - 30 m high wall. Checked down and left but couldn’t find an easy spot. Apparently the easier mostly scramble/steep trail route is up and to the right on this first rock band(follow cairns). We went up a 5.4 groove for 30 m and then scrambled some slabs and trees for another 50 m.

Put rope away if used it as it is another 1 hour as go up scree, small rock bands and treed ridge until hit second rock band which is 50 m+ wall. Lots of cairns and we went down and left to the find the 5.5 layback crack beside a big tree. Fun section - a left hand underhand move/layback helps to go up this. Good protection placements in crack. Hit bolted belay in 30 m. Top of ridge in another 20 m. 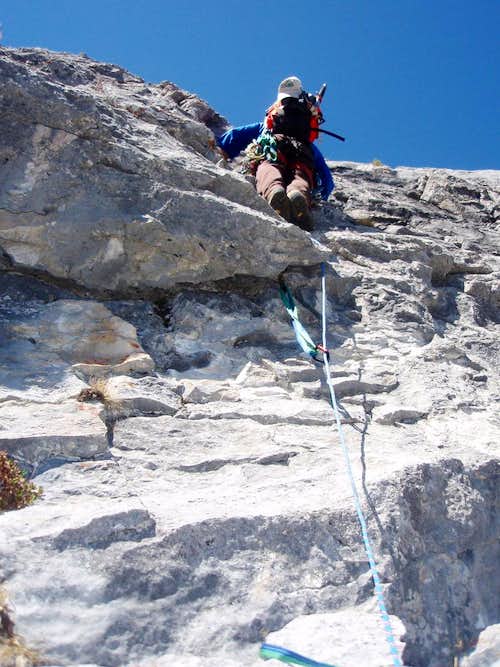 Compare to Dow's pic of climber on same crack


Looking down second rock band at Kevin at bolted belay.Note - all bolt hangers here and up on ridge have been removed/stolen as of Aug/2011.- I do not get the point of this on a easy route used by beginners- if you do not like bolts just don't use them! 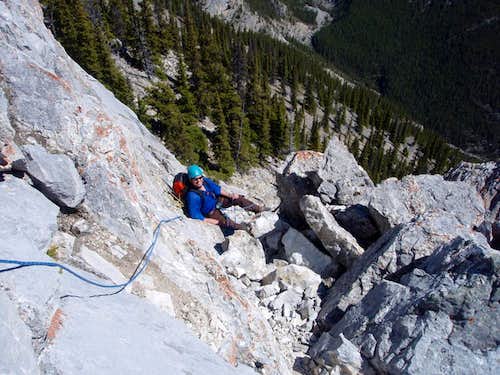 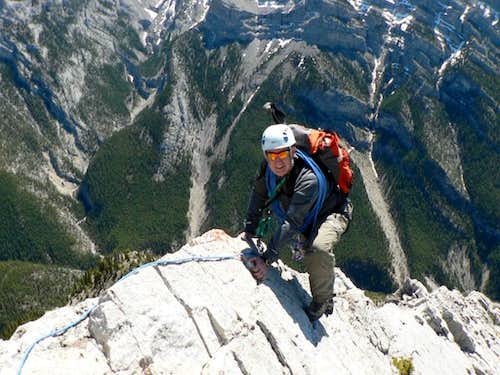 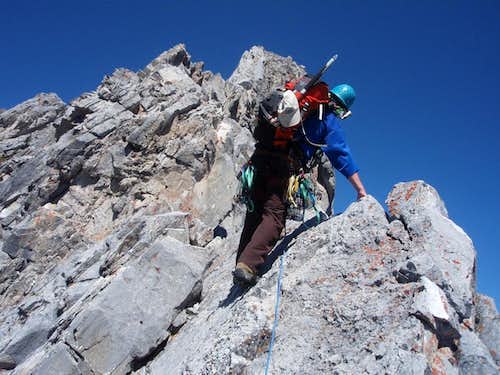 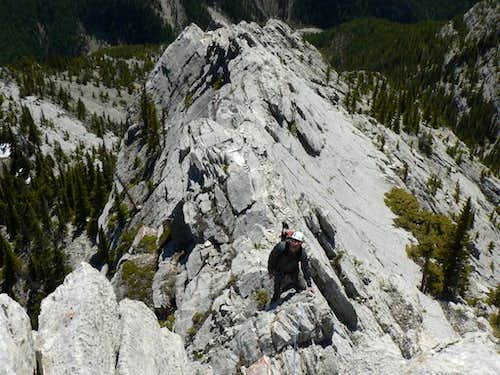 Now on rock ridge, go over exposed knife edge sections, some bolts-Hangers removed Aug/2011- and over one 5.2 tower. Put away the rope again for 20 - 30 min as hike down scree and back up along broad ridge as it turns left.
Easy part of ridge. 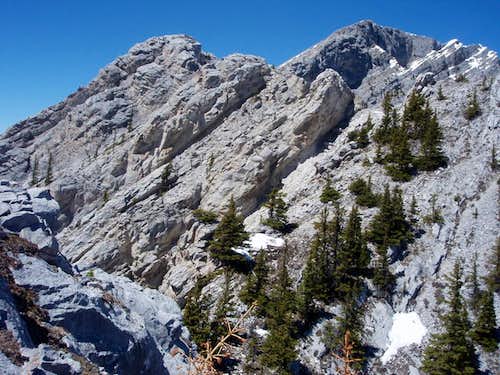 Scramble around some towers and up to a large tower/rock band that blocks the ridge. If it is dry some people climb on the right side of this tower and report it is only 5.5 if dry. 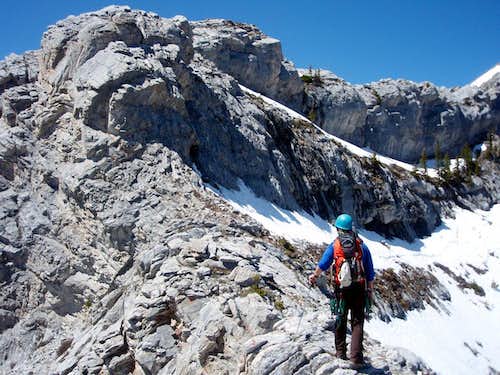 The trails leads right for 100 m along a 10 m wide ledge at the base of the band and then up easy rock for 15 m to another ledge at the base of second rock band. Traverse back left to the top of the tower and then up onto upper rock band/rock ridge. This would be quite easy if dry but it was deep snow when we did it and not pleasant as we wallowed and were at risk of avalanche. 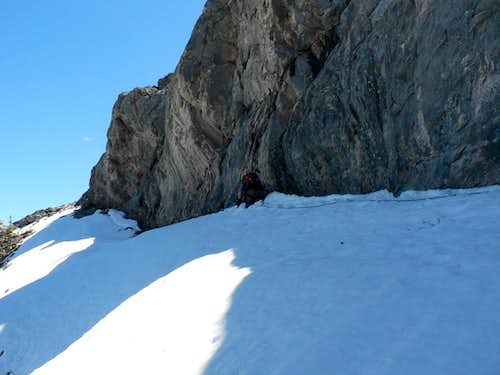 Small wet Avalanche - I kicked some snow off to see what would happen and it was 10 -15 m wide and 200 m long before it went over a cliff. 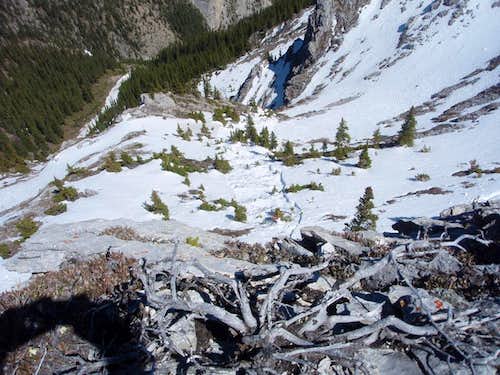 A group behind climbed the 5.5 groove to the right of the tower but we had our boots on and it looked wet so we went with the snow. 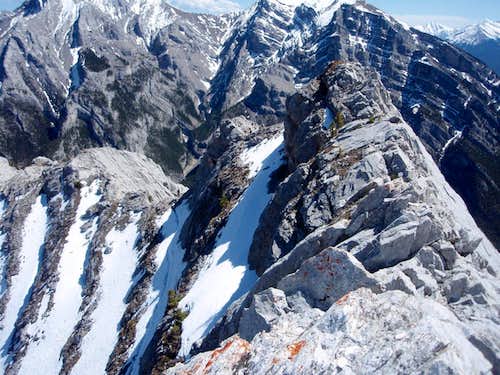 The upper rock ridge has sections of knife edge and rubble. 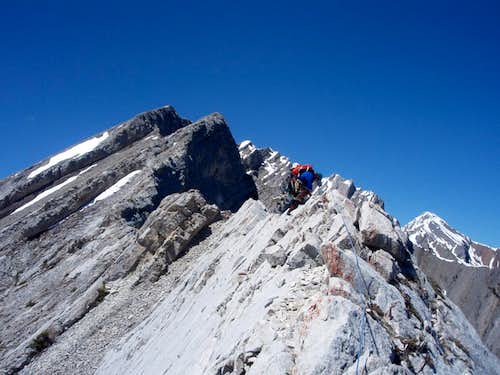 The final 50 m high dark rock band is the skyline bump at the top. 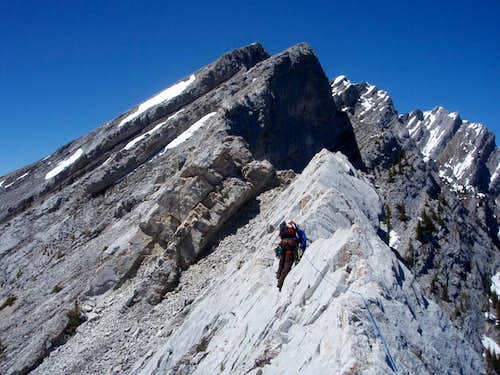 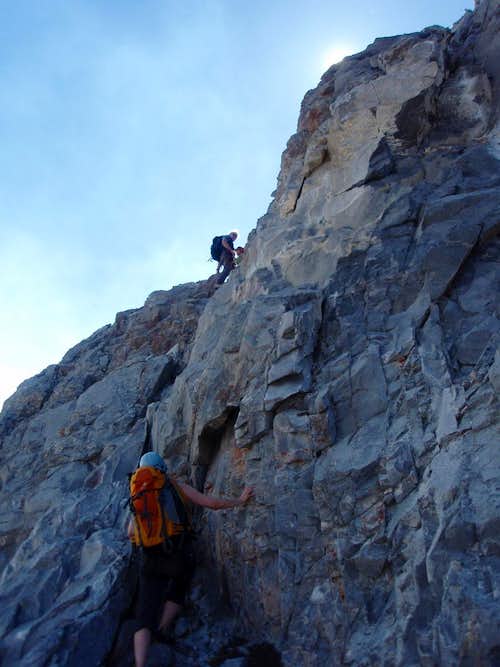 This looks steep but an easy 5.3 route slants up 30 m and left across the face and puts you on the scree/rubble slopes which lead to the false summit above the teahouse. 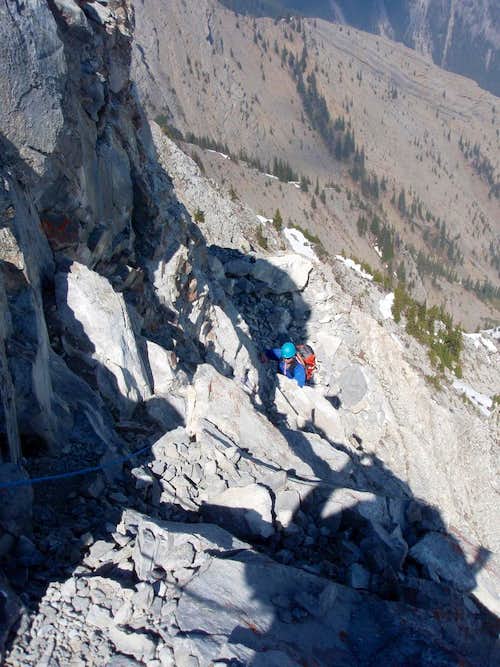 Eight hours to here for us but wasted time on the snow and route finding on the first rock band. Two hours down the scramble route.

Nice photos and TR Bill. This looks like a fun climb. Perhaps I should give it a go sometime.

Thanks Colin. It is a fun climb - well worth doing.

Excellent! That definitely whetted my appetite for some Rockies fun. Headed that way in a few weeks!

Thanks. Glad you enjoyed it.

It got my appetite

going for some "alpine fir" stuff here in Arizona.

When you say "lots of ticks," are you talking about wood ticks
or those really small suckers that suck??

When I lived in northern Utah, I used to be a "tick magnet!"

Larry - They are Rocky Mountain wood ticks - the little reddish leathery ones. We were in prime sheep terrain and we had them all over. We thought we were okay once we got out of the trees and on the rocky ridge but still had to kill some in the parking lot and at home. I had to carefully go through all my clothes and gear in my garage before my wife would even let me in the house.
Terrible little things.