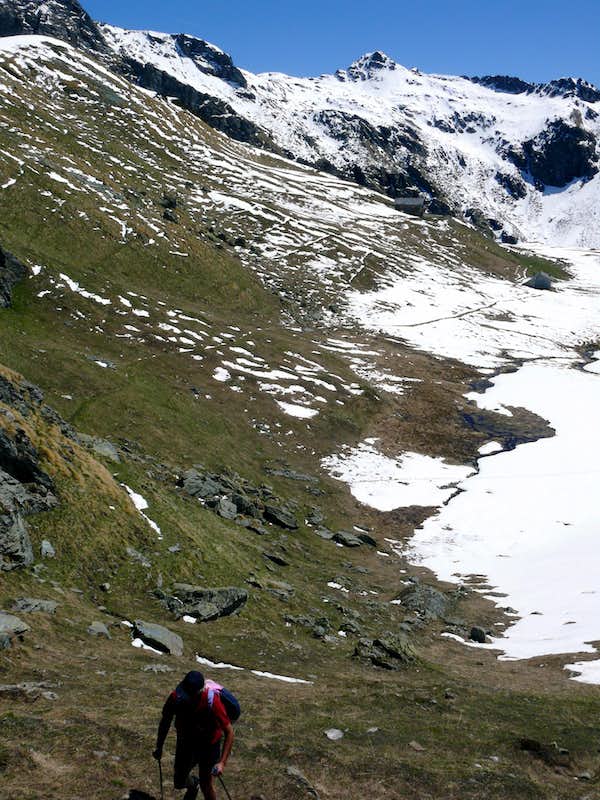 The Ayas Valley is the second, after coming from Piedmont to Gressoney that from Pont Saint Martin Commune rises to the North to Mount Rosa, the valleys that descend from the Swiss border to the South in the Central Valley perpendicular to the River flowing at Dora Baltea near the Municipality of Verrès. Going from that to the North, logically speaking diametrically opposite, we reach the important Tourist Center of Brusson Commune (artificial lake and international cross-country skiing) at the foot of Testa (Head) Comagna to the West (ancient Roman mines of gold) and the Punta della Guà in the East (above the beautiful Lake Bringuez). Just this last direction leads to a splendid Regional Road asphalt that reaches the Fraction of Estoul, at the base of a large Basin you open fan-shaped reaching toward the East Hill of Ranzola. Center is not particularly well known and popular, offering small downhill ski runs and an impressive range of possibilities for the practice of hiking or, more simply, for walks to do. Due to the poor quality of the rock, little is allocated to mountain climbing even on the Spur South-southwest of Punta della Guà has been traced a valid route of 300 metres in March 18th, 1973 by Guido Botto, Edward Ferrero and Paolo Moretti; interestingly the complete traverse of the three Mont Ciosé, also for the inhabitants Chose, from South/North accomplished solo ascent by Alessandro Gogna August 14th, 1982. During the winter the same was climbed for the North Wall by Pier Luigi Ferrero, always alone, 21th February 1988, but this wall is facing the Gressoney Valley; achieved even in the winter from Col Ranzola on crest by Osvaldo Cardellina and Emilio Bertona January 3th, 2002. During this season the area lends itself very well to the practice of Ski-Mountaineering and that of Snowshoes, for this last even with short and easy walks suitable for beginners as well as in this fascinating and a little "mysterious" discipline, rediscovered not long ago and in a short time has made many converts among mountain lovers. Now "classic", however, the practice of recording a Ski-Mountaineering remarkable turnout, especially after the construction of the shelter; remains, besides, the possibility of day trips departing directly from the parking of Estoul Hamlet, in view of the "quiet" approach exists. The existing farm roads, even if not passable without special permission, make it easier route in the early parts or along the bottom of the walloons themselves. However, it remains always the ancient paths that, unfortunately after the construction of private roads, ranging in progressive degradation. 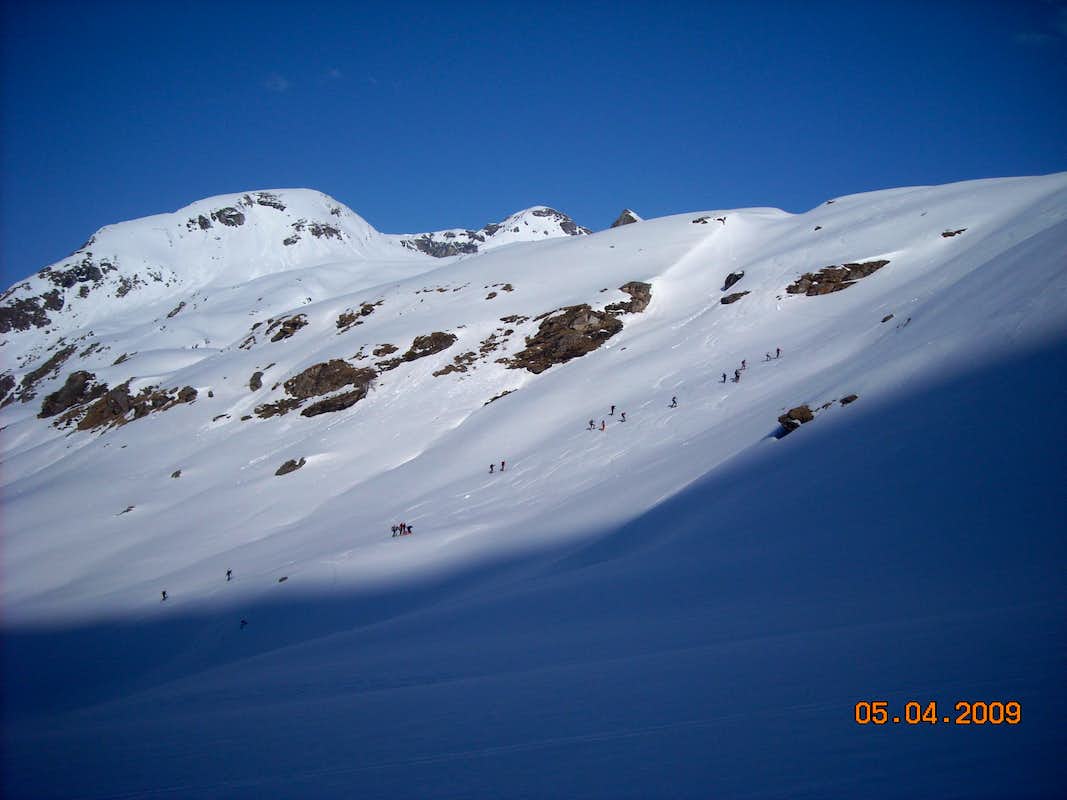 Crowding in Palasina(z) Vallon from Estoul Resort, by giampiero assandri
NOTE: in this regard we refer to the various published works on SP about itineraries chosen and recommended, remarks, tools and new technique on Snow Rackets. By analyzing this area, we can divide it, starting from the West and to East, into three distinct areas with each offering different characteristics and particular features. a)- Conca Palasina or Palasinaz located to the West and to the North and East by the watershed ridge limited to that from Punta Valfredda also Freidòhòre down in South to the Tip Valnera and to Mont Bieteron and his great shoulder or called Mont Palòn. This, in addition to numerous pastures and alpages, also includes the Refuge de l'Arp, positioned at the base of the Western slopes Valfredda/Valnera Summits and before the three homonym small Lakes, located in their turn immediately to the North under the Hill Valfredda. b)- from the Valnera Hill or Valdònierfòrkò down towards the South, dividing the Gressoney Valley, up to the important Hill Ranzola. It contains the two beautiful Lakes Estoul. c)- last area of lower elevation, which rises from the Hill of Ranzola first at the Punta della Regina finally to decline significantly on the watershed to the West with the parallel Vallon of Frudiera up to the top 'inhabited Graines with its magnificent castle with tower. Three distinct zones separated and otherwise characterized in the same extended area. 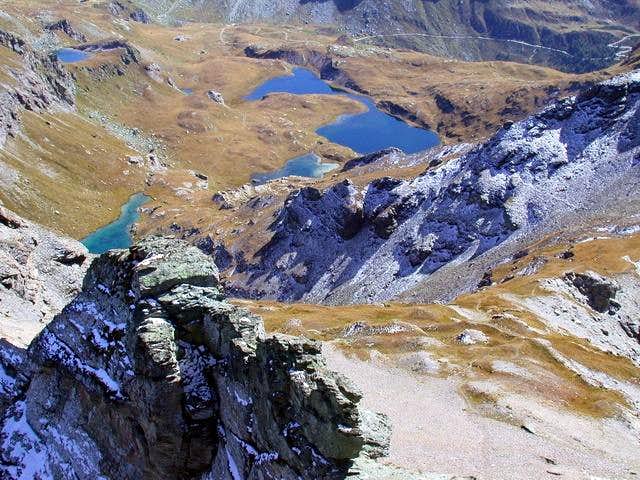 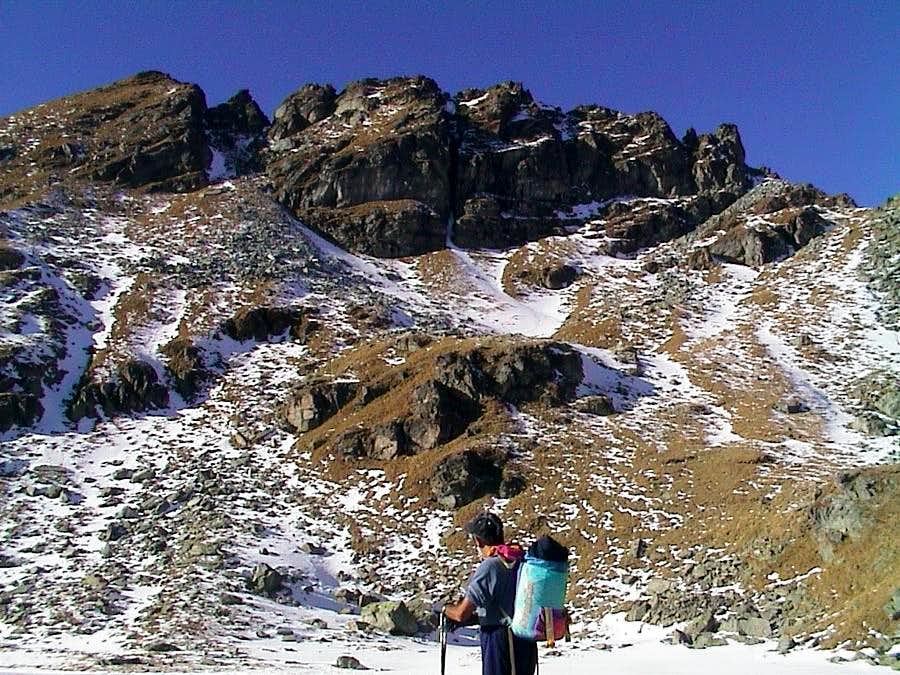 By car: By plane:
From Valdònierhòre above the Refuge de l'Arp, by emilius 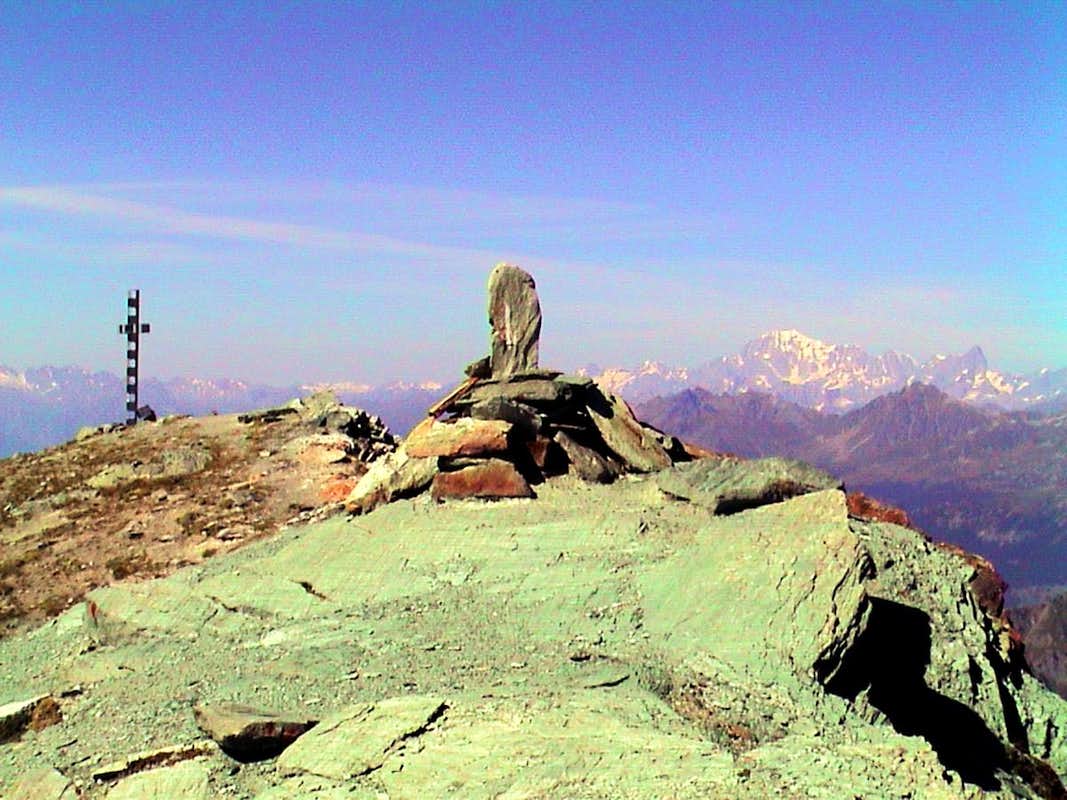 The "King" amongst the Summits, by emilius
This first district of mountains above the Basin Estoul is aimed at the most in the West, or from the top, first of all, the Punta della Guà above the Municipality of Brusson.It up to the Corno Bussola (Horn Compass) on the watershed from South to North; from the same a second branch is directed towards the Levant, for separating the Vallon of Mascognaz to the North by the Palasinaz (after the Punta del Lago, the Pass and the Top of Palasina), reaching the Tip Valfredda, whence a third and final descends towards Southeast. This, after the passage of the same name, stands up to the Top Valnera where it bifurcates: one branch goes to the South-southwest, and after a series of altitudes unnamed, form the Mont Bieteron his Southern shoulder, known as Mont Palòn (inscriptions on rocks of the Summit, not to be confused with the other with same name just North of Tip of the Guà); a second branch descends farther South, adapted to contain the Basin real Estoul, forming in its descent the "Bocchetta" (small step in the manner of a notch) of Eclou, a series of teeth which precede the three Summit of Mont Ciosé or, "in loco", Chose to conclude to the Ranzola Hill. From this point on the watershed between Ayas and Gressoney continues in the direction of several top above the beautiful pyramid of Mont Nery (3075m), the highest mountain of this long stretch after the partition of the Testa Grigia (Gray Head; (3313m). But now we are in the Walloon of Frudiera or Frudière with its beautiful lakes; but the second branch (Estoul) that this will be part of future studies. To us, for the moment, only interested in the first sector, ie to Palasina that from the Guà Summit, with a large semi-circular turn, reaches the Mount Bieteron his shoulder and ending above Lake Literan and the whole series of the Alps that Northwest wind above Brusson and Estoul. This sector has expanded twenty top among which ten have a name well-defined and reported by the Maps. Furthermore, it is the starting point for the ascent of Corno Vitello (+; 3057m) via the small saddle (2778m) on an extension to the North of the dividing ridge; but this belongs to the top of the Mascognaz Vallon, immediately North than Palasinaz and bordering those of Freida/Loaoche-Pénte in Gressoney Valley. These Summit develop with two small parallel and semicircular mountain ranges, where the nodes are identified in the basic topographic Tip of Guà, Bussola Horn, Top Valfredda and Bieteron for the first area, and always starting again Bieteron to Tip Valnera and from this to Ciosé or Stallerhorn for the second. 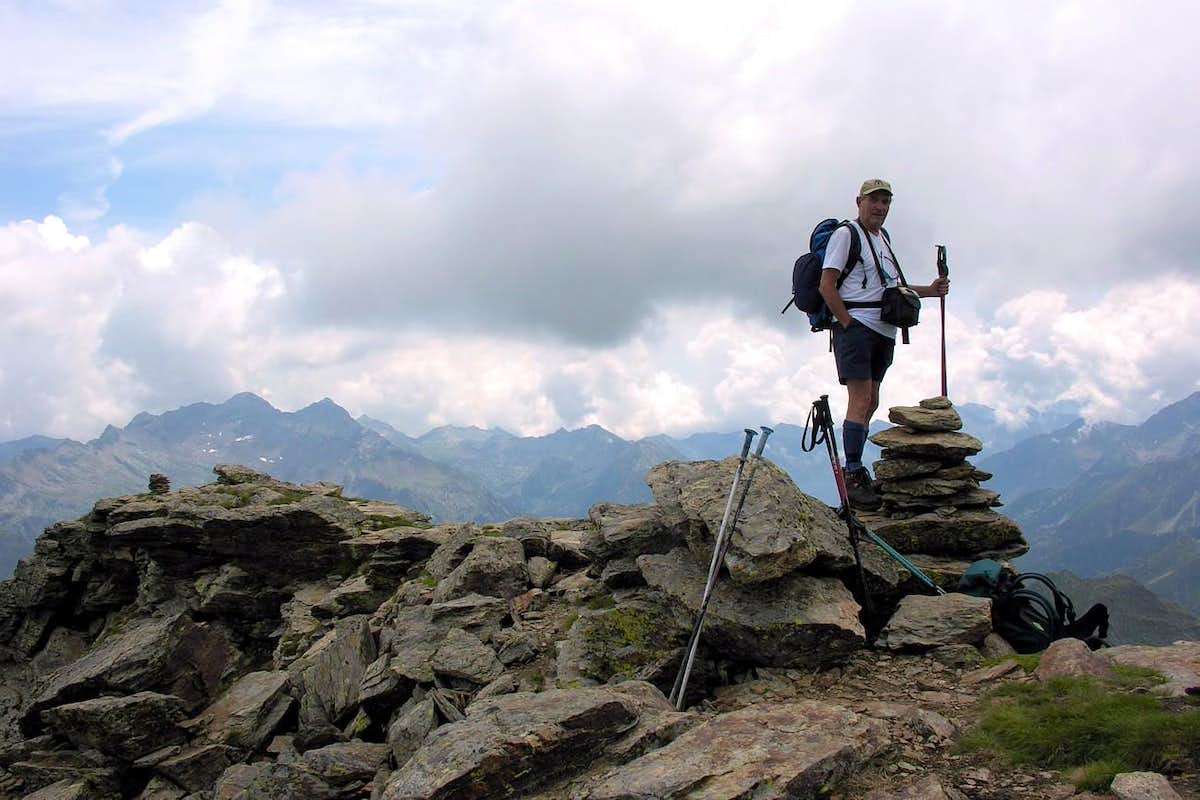 A Summit which you want to go? 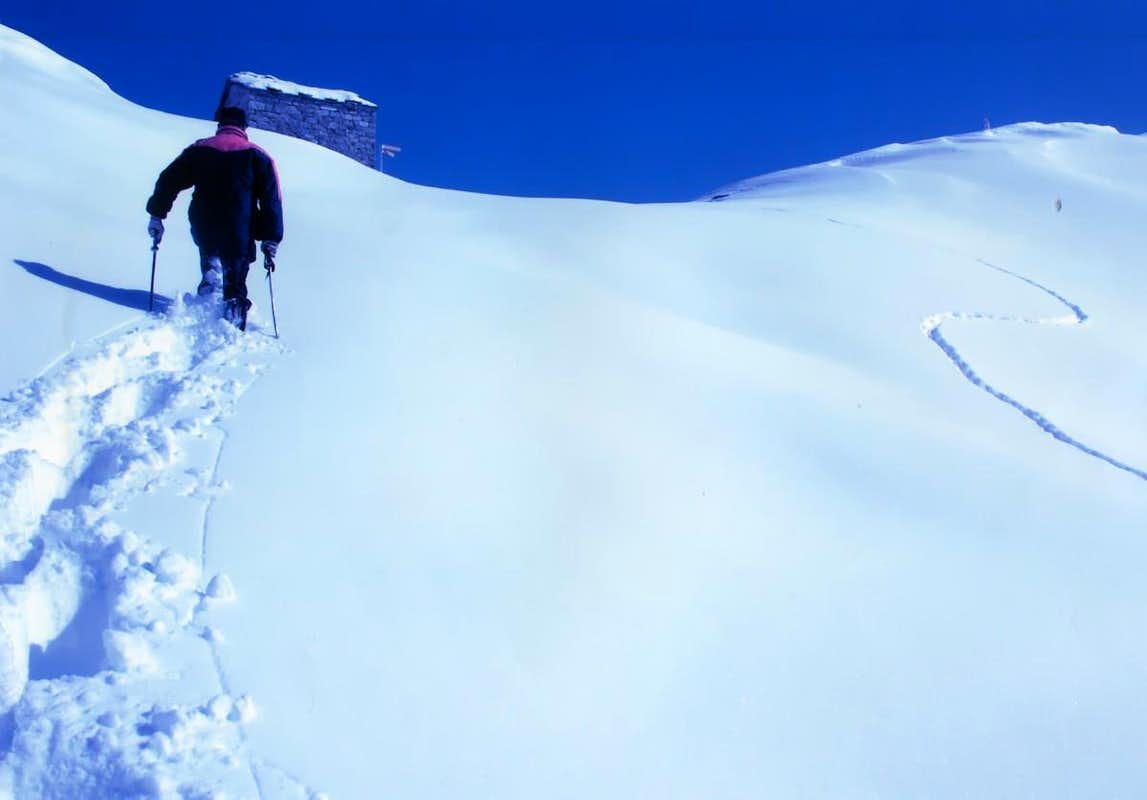 With the deep snow, the Music changes! by emilius

Palasina(z) Lochs: the Second Battle Lake and the connection with the Prime, by Antonio

Where do we go fishing? 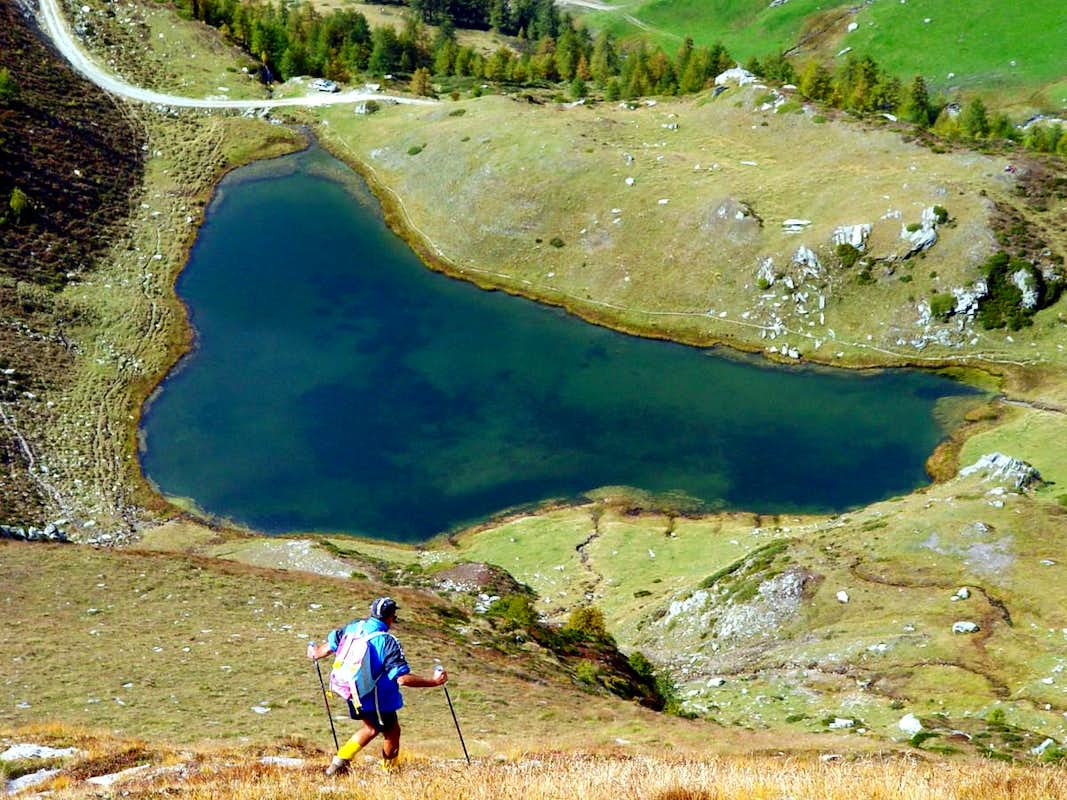 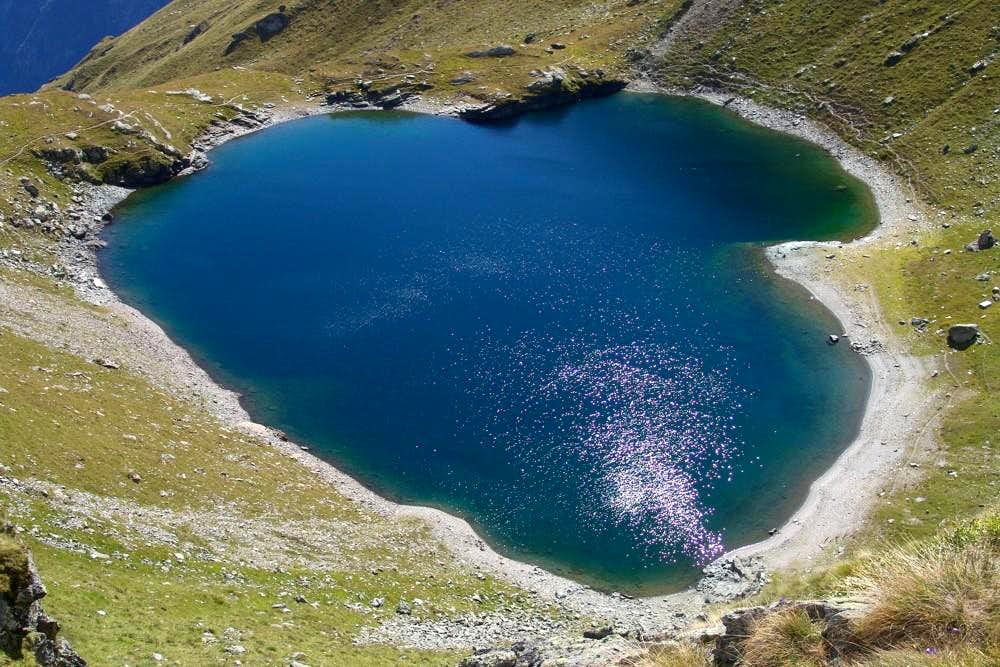 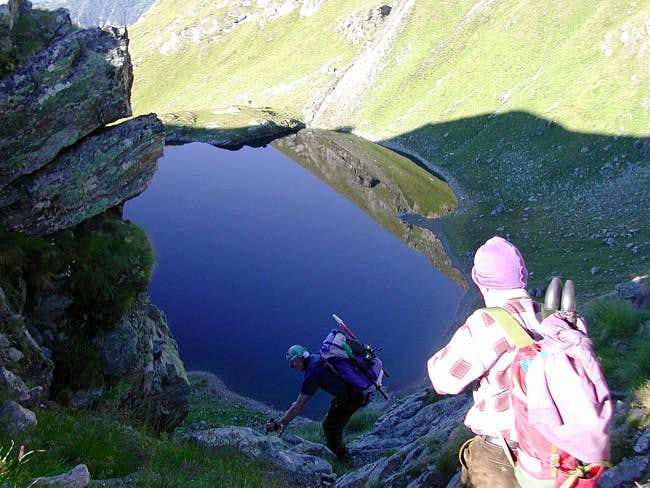 Assault from above, through "The Bocchet", by Fishermen, by Antonio