Etna is Europe's highest volcano. It's one of the most active volcanoes in the world and it's the highest elevation in central and southern Italy. The people of Sicily and most of all the inhabitants of Catania and surroundings (Catania is located at the foot of Mount Etna and has more than 1000.000 of inhabitants including the urban agglomeration) call this volcano "Mongibello", the beautiful mountain. That underlines the very special relation between the Etna and its people. Mongibello is probably the most beloved mountain in whole Europe. Spitting out his lava Etna gives fertile ground to his people, at the same time he can cause incredible distruction. So Etna gives life but he can also take it, that's what makes this mountain so special for the millions of people living at his foot. For those people Etna is like an omnipresent part of their life.
Actually the highest point of Etna is the so called Bocca Subterminale di Nord Est (north-eastern crater, so it's not the main crater which rises 3323 m). Due to frequent eruptions the highest point of the Mount Etna is not a fixed place. The Bocca Nuova (actually 3260 m) is expected to become Etna's highpoint.

Normally Etna is climbed from the south. The street ends at an altitude of around 1900 metres above the sea. Here you'll find parking possibilities, some (good) restaurnats and little stores. After the last eruption the cableway which formerly brought you to the Piccolo Rifugio at 2500 metres does not exist any more.
The normal route on the top of Etna doesn't offer any technical problems. In summer you can even take a trip on one of some special cars which are able to bring you at a height of 3000 metres.

Etna is a volcano that never stops smoking. Some people can stand the smoke on the summit craters without any problems, others begin to vomite, so be prepared! 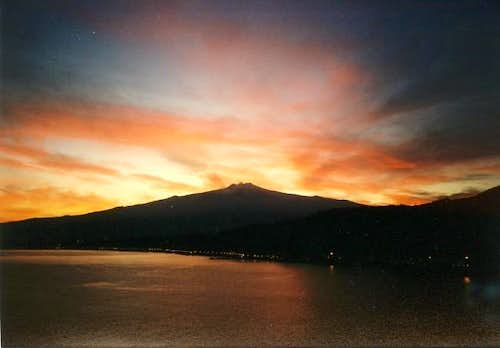 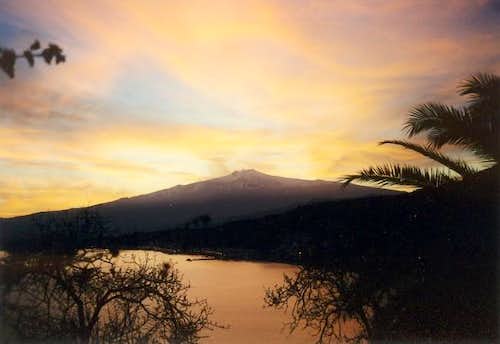 Getting from Catania to the southern trailhead at the well known Rifugio Sapienza (hut):
The only problem which arises while getting to the trailhead is Catania. It's not that easy to come out of this chaotic (but very beautiful) city without any damages. When you're out of Catania you simply have to follow the street which leads to Niclosi (in the north-west of Catania). From here Mount Etna and of course the street which goes to the trailhead at the Rifugio Sapienza are indicated. You can't miss it.

No permits are required. The whole mountain stands in the Parco dell'Etna (natural park), what does not give any limitation to hiking aktivities.
Trailhead-parking is of course for free.

Etna can be climbed throughout the whole year. I think that winter is the best time to climb this mountain. In winter the temperatures are not that high and you can really enjoy the silence up there. Only problem is that in winter you'll need crampons for the last steep section which leads to the craters. Moreover I recommend to be informed about the activity status of Mounta Etna before climbing it. (just ask somebody in the resaurants at the trailhead)

gabriele.roth
if you want to climb Etna on foot (without skis) you should choose May and the first 15 days of June, or from the half of September to the end of October.

There are several hotels on the way between Nicolosi and the trailhead. The Rifugio Sapienza (hut/at the trailhead) offers a really nice "Base Camp".
In Nicolosi you'll find also a camping place:
"Camping Etna"
Via Goethe,
95030-Monti Rossi, Nicolosi
Tel.:095/914309 Fax:095/7915186
You won't find any recovers on the mountain, except from some burned huts. (In case of bad weather they can still save lives)

lots of hotels, search them with: google.com

there are countless links for Monte Etna on the web. google will help you to find them.

People can arrive without any problem only till the punta del Filosofo (2980m).
Hikers that want to get the summit or go out from this delimited area MUST be leaded by a guide ! (You can avoid this limit asking a special permission to the Catania department of Club Alpino Italiano )
Mountain shoes needed, the hike has a cost of 55€ (including telpher, taxi and guide.
From Punta del Filosofo to the summit you have to walk for about 1hour and a half (difference in elevation ~ 400m)

Closed, but not closed?

I attempted to hike to the summit crater on 5 June 2015 from the Nicolosi side. The gondola is running and from the upper station it's possible to either hike up or take a bus to a certain point. The trail to the summit crater is roped off. I was informed by the Italian guides that it was prohibited to everyone (including guides), but then saw a guided group head up the summit trail...take that for what it's worth.