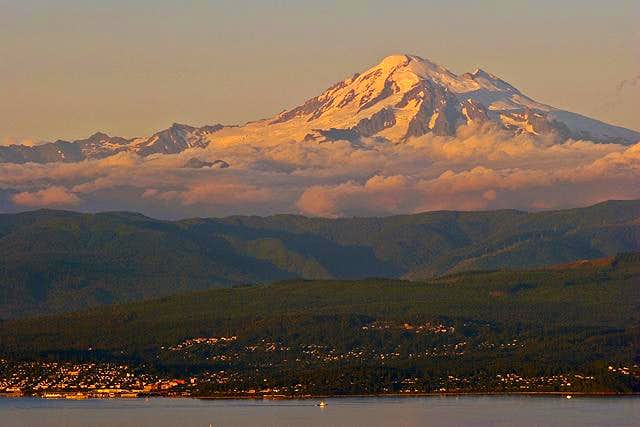 Evening hues on Mt. Baker from the top of Mt. Constitution on Orcas Island. In the lower left corner is the town of Bellingham - July 16, 2005
« PREV NEXT »

This shot is absolutely beautiful. The clouds have such an interesting effect on the terrain and the colors just make this shot amazing. Nice work and thanks so much for sharing. Photo of the week maybe?

Thanks a lot for your comment. I am glad that you enjoyed the photo! It is a beautiful view from up there...

Looks like you enjoyed the rest of your trip! This is a excellent photograph, very well balanced with the lighting.

Thanks Martin. I did enjoy the trip; it was nice and relaxing for a change. It was great finally meeting you in person. Perhaps, we will see each other again this winter. Keep me posted about your plans!

When are we going to climb this, Misha? :-) Wonderful shot!

BTW, congrats with winning the Photo of the Week contest! Well deserved

Thanks man! I just got out of a staff meeting, but to be honest I was thinking of climbing possibilities next year. Maybe a two week trip to WA is order, hitting some of the big peaks.

I was thinking along the same lines. Perhaps, North Cascades for a week!!? Lets talk about it on Sunday :)

It looks way cool, Steve. Did you do it?

So what are we waiting for? I have lots of vacation left this year :)

As far as I know, the Coleman Headwall hasn't seen an ascent July or later for some time now. The reason is that with the glacial recession, the icefall gets very broken up becoming a nightmare of overhanging ice seracs, bergshrunds, etc. The route was attempted by someone I know a couple of weeks ago. He is a strong climber (WI4+ lead) and got totally shut down.

The Coleman Headwall did see a winter ascent this year, there was a TR on CC.com. Most of the crevasses were filled in with snow, making for an easier climb.

You guys should try the North Ridge of Baker instead, if looking for a late summer alpine ice objective. Also look at the 50 classic climb, the Price Glacier on nearby Mount Shuksan.

The actual Coleman Headwall route goes directly up through that icefall near the base. Looks pretty dang hard to me. That snow slope on the left side of the photo is not the route.

Hope you have a good trip whatever you decide to do.

Fantastic shot Misha, amazing perspective and colors! Clouds give extra flavor and show the power of the Baker. What is the distance from the coast to the Baker, I wonder?

I'm a local, so I had to get this corrected. The urban area visible in the left foreground is a portion of Bellingham, WA. A line on the map drawn from Mt. Constitution to Mt. Baker passes through Bellingham. Anacortes lies well to the southeast, about 65-70 degrees to the right of this view. The linear distance from Mt. Constitution to Mt. Baker is about 47 miles. From tidewater in Bellingham Bay to the summit of Baker is about 32 linear miles. (Not to mention more than 2 miles of vertical.)

Re: Great shot, but wrong town

Thanks Lee! I corrected the caption. You have to forgive me, I went with a "knowledgeable tour" of an "experienced local" who pointed this town to me and declared it to be Anacortes.

It was an amazingly clear view for such a distance...

I wish I can paint that well :)

Thanks Dave. Yeah, we lucked out with weather; it rained only once in five days! I can't wait to climb some alpine routes in Northern Cascades next year