What do American politics and climbing on Vancouver Island have in common?

Hints: Intransigence, obstinacy, deep rooted-ness, constantly in your face, refusing to go away when no one wants you any more, a complete inability to pronounce the word “nuclear.” Yes, you guessed it – BUSH. OK, maybe I exaggerated a bit on the nuclear thing.

If you want to get to the top of many, in fact most, Island mountains you just have to face up to it; at some point you’re going to get really intimate with the biomass. Not that bushwhacking is a bad thing. There’s nothing to beat that feeling of satisfaction as you stagger out of the undergrowth at the end of a long day, tired, cut and scratched but with a summit and a major bush bash under your belt. Indeed, our Island alpine guru Sandy Briggs has written eloquently on the subject in “Bushwhacking as Ethos” (Canadian Alpine Journal, 2006, Volume 89. pps 16-19). Read it and see if you don’t agree.

Almost anywhere you go on the Island outside of Strathcona Park – and frequently enough inside the park too – you’ll find no trailheads. In fact you’ll be lucky to find trails. Cairns and flagging might be in evidence but don’t count on either. In the north part of the Island don’t count on anything. And that includes even finding a way on to your objective.

Tony and I left Victoria on September 12th with the intention of climbing Pinder Peak, the highest point on the north Island before the mountains begin their slow descent to tidewater on the north coast. We do have some guidebook literature on the Island and it all pointed to access to Pinder Peak up a disused logging spur known as “Apollo Creek”. We arrived in the area in plenty of time to scout around, locate what was indicated as a major feature, drive up it and camp at the highest point we could reach. 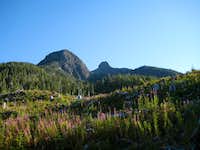 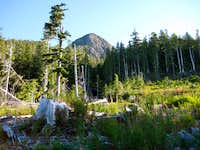 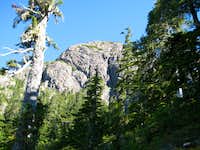 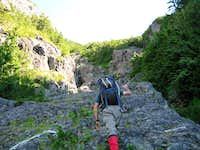 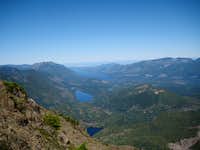 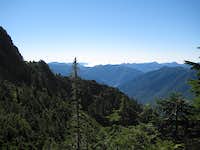 View to the west coast 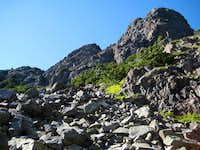 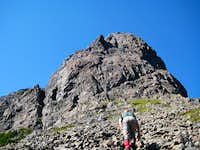 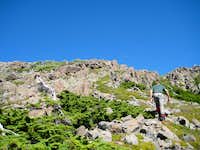 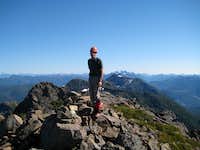 On the summit of Pinder 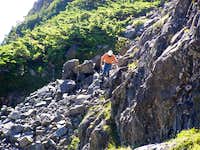 Descending from the summit 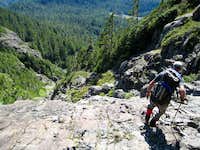 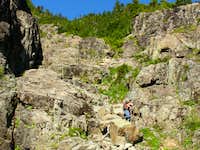 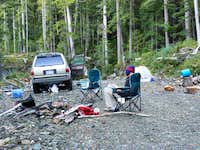 Luxury camping
Two hours of driving up and down the Artlish valley main line later and we were no nearer to locating this mysterious road than when we started. Any spurs we tried took us away from not towards the mountain. Finally at about 9pm we pulled into a flat bit and camped for the night. In fact, according to the map and GPS we weren’t even on a road at that point!

Resuming our search early next morning, we spotted a badly overgrown track about where Apollo should be. We reasoned that this couldn’t be it. This was only a little bit better than a bushwhack, never mind drivable. So we looked further back along the main line towards Atluck Lake until a possibility finally presented itself. The spur wasn’t marked on any maps but as we knew, logging roads come and go. One has to be always prepared for a fluid situation.

The spur was well equipped with all the usual deep water bars but they posed no obstacle to my truck and we ended up at ~ 600 metres elevation before coming to a halt at a log barrier placed there as a warning that the bridge ahead had been removed. A quick walk up the rest of the road and a map check showed that we were one drainage to the north of Apollo but that we might be able to approach Pinder from here. We made the call to give it a go, returned to the truck, geared up and were off at 9am.

At 9.30 precisely we stepped off the road end into the industrial cousin of bush – logging slash. Ahead of us was the creek that the map showed as originating on Pinder’s south slopes. It was dry. Animal trails took us through the slash somewhat further to the east of the creek bed than we wanted to be but once in the trees we traversed northwest back towards it and then resumed the desired northeasterly course. Huckleberry bush soon enveloped us, Tony began to enter regular waypoints in his GPS and the first flagging went up.

A little over an hour of steady climbing through moderate bush and we suddenly emerged from the trees and re-joined the creek at the bottom of a steep ravine.

We saw no evidence at all of human passage to this point or indeed beyond it until almost on the summit. Other living creatures, however, were obviously frequent visitors and this phase of the climb soon earned the appellation “bear shit gully”.

After a 10 minute breath catcher we chose a line initially up the centre of the ravine and then traversed off to the right as it began to steepen. Under the (climber’s) right wall we found an easy angled if damp ramp that took us almost to the top of the ravine and, as if in punishment, dumped us into some serious krumholtz. An hour of swimming about in this stuff and we emerged once more into clear terrain below a boulder field and with the summit block in full view for the first time. Thirty more minutes saw us into the saddle between Pinder and its satellite, “The Horn” with views down to Atluck Lake, to both coasts of the Island and to the coast mountains on the mainland.

The guidebook describes the following. “From just below the col between Pinder and the Horn strike directly across snow or scree to gain the final rocky section of the SE ridge to the summit”. Well, we could see scree and we could see the SE ridge but I’m damned if I want to climb it I thought. From the saddle it looked like steep, exposed 5th Class climbing and, apart from helmets, we’d brought no gear with us. However, as the old saying goes, you have to rub your nose in it before judging. So we had a bite to eat, put the lids on and started up.

It only took me 4 or 5 vertical metres to decide that this wasn’t on. Not that the climbing was that difficult. It was more about the fact that we had 200 metres of it to do and that that offered an awful lot of room for just one slip in the course of the up and, particularly the down-climb. So we came down and traversed off left to a promising looking gully. Same story. It might go but sans gear, I wasn’t happy. A bit more casting around and still nothing obvious appeared feasible. So, disappointed but prudent, we backed off and headed down to the packs.

As always in the hills, I constantly look back as well as ahead. As we got a bit lower and the summit block came more into perspective a possible route on the extreme left of the summit block presented itself. So I called Tony back. It certainly looked like it would go but it put one into a saddle below a sub-summit to the southwest – the wrong side - of the main summit. Would they connect? It even looked like the route sketch in the guidebook, but it was up a southwest feature not southeast. Then again, the same guidebook would have us still searching for the mythical Apollo Creek road at this juncture.

So, up we went. Tony up a loose gully, while I chose a steeper face to its left but on good rock. Neither option was more than Class 3. We popped out onto the saddle in five minutes and five minutes later onto the sub-summit. There was the main summit ahead with no impediment to getting there. At this point and for the first and last time that day, we began to see boot prints in the dirt other than our own. Five more minutes of hands-in-pockets stroll and we were there.

In addition to the staggering 360° views, the summit offered a little interesting local history. A metal plate dating from September 1955 had a whole bunch of names properly engraved on it and a whole bunch more just scratched on. We added ours. We were just the second party to summit Pinder in 2007. There was also the inevitable memorial plaque but at least this one was in wood and just sat there - unlike the intrusive block of stone bolted to the summit of the Golden Hinde that I had encountered just 3 weeks previous.

After 15 minutes or so on top we set off down and retrieved the packs 20 minutes later.

The last waypoint Tony had marked was at the bottom of “bear shit gully” (no pun intended!) and, paranoid about being sucked into the Apollo Creek drainage, we made a beeline for it. This put us nicely into the worst bush of the day. Steep and with a clear tendency to become vertical, we were soon blessing the same stuff we were now clinging on to for dear life that we had cursed for its unyielding intransigence on the way up. The bed of the ravine offered relief to our right and we eventually succeeded in getting into it. Thereafter we preferred the exposed scrambling down it to any more vertical bush.

Once at the bottom of BSG we simply followed the GPS down and out to the road in under an hour. It took about 5.5 hours to reach the summit from cars, including breaks, route finding and false starts and just 3.5 to get down. With knowledge of the route, the round trip should take no more than 7.5 hours in future.

Once back at the hunters’ camp we got out the chairs, beer, chips etc and had ourselves the luxury of a car-camping evening full of the events of the day and the always enjoyable climb post mortem.

Route to the summit
The next day we went off to climb Conuma Peak – the so-called “Nootka Matterhorn” close to the west coast near Tahsis – but they’d closed the road access and removed the bridge. That’s Island climbing for you.

What of the mysterious Apollo Road? That I believe we can answer definitively. From the summit we could see quite clearly the streak of lighter green that indicates where it used to be. The overgrown spur we had spotted off Artlish Main was indeed Apollo. The guidebooks are seriously out of date – as is the road. It’s impractical to all intents and purposes.

Thanks mate. Glad you liked it.