Exploring the Canyon Below the Lion’s Den

Dakota Sandstone Outcroppings in Elm Creek Canyon
For years, I have been intrigued with the abundance of rocky canyons in the Black Hills, particularly those around the southern and western edges. How these deep canyons could be carved out over such short distances in a region of minimal rainfall has sparked debate among visiting geologists. In contrast to the thick green forests and granite peaks in the central Black Hills, these sandstone and limestone canyons are similar to those in semi-arid regions in the southwest part of the USA. So, I was inspired to keep searching for opportunities to explore. 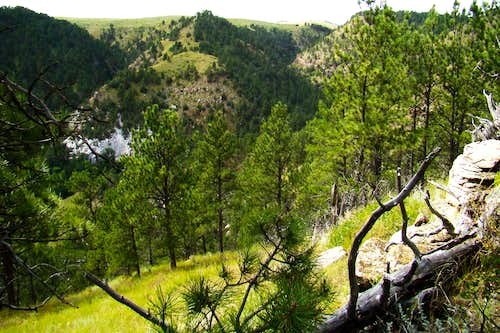 Upper Spring Canyon Branches
A phone call to a rancher I knew in Fall River County, South Dakota resulted in an invitation for a tour and some hiking on his land to the north and east of the Battle Mountain-Friendshuh GPA. The ranch covers portions of both Spring Canyon and Elk Creek Canyon. Not totally sure of what to expect, I showed up at the appointed time with my hiking gear and camera. While I was loading my gear, my host loaded some other provisions into his ATV, including a 30-30 Winchester. Naturally, my curiosity was piqued by this. In the course of conversation I learned the area we were to explore was the territory of a mountain lion and her three nearly full-grown cubs, so the Winchester was for self-protection. He had learned that the lions’ current den was located high on the south rim of Spring Canyon and could be monitored with binoculars from a certain spot high on the north rim of the same canyon. 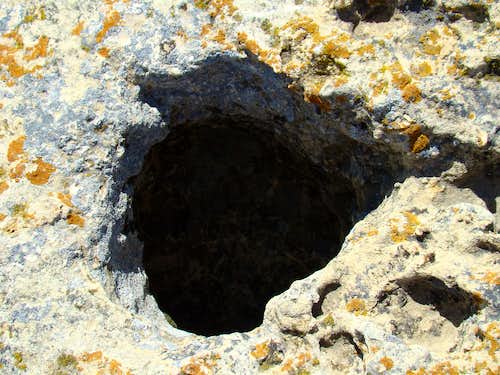 One of Several Dinosaur Tracks 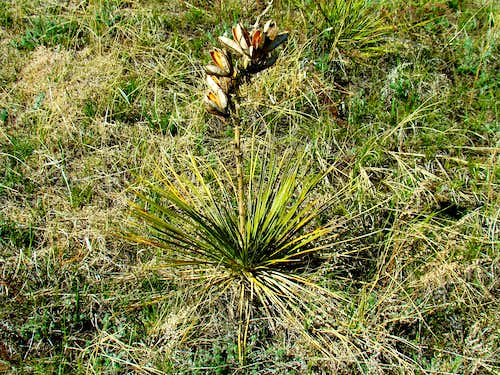 A Yucca Plant
The first portion of this outing was by ATV, covering quite a few miles, zig-zagging around Elk Creek Canyon and Spring Canyon, including many of their branches and overlooks, plus a run up to the divide with Dudley Canyon, where a visiting geologist had identified several prints in sedimentary rock to be ancient dinosaur tracks. The most common vegetation in the area are Ponderosa pine trees. Closer to the mouth of the canyon, cottonwood trees are plentiful, while higher up in the ridge areas, some stands of aspen can be found. Also quite common in this area are yucca plants (Yucca glauca), which long ago was used by Native American tribes to make a type of soap, hence their name for it, “soapweed”. Eventually, our route dropped us down to the floor of Spring Canyon. Outcroppings of Dakota sandstone are everywhere and range in color from nearly white to brown to red. 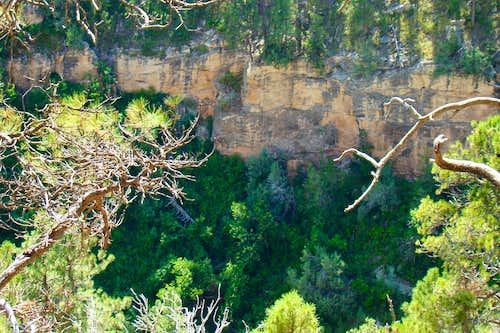 Sandstone Wall on the South Rim of Spring Canyon
Once on the canyon floor, we soon had to park the ATV at a place where a recent, but rare flash flood had piled brush deep enough to make passage nearly impossible, so we spent some time clearing a passage through that brush. Considering how a flash flood had ripped up nine miles of narrow gauge rail line 107 years earlier at Elk Creek Canyon, 70 miles north, these brush piles were not that big of a deal. The canyon floor was mostly dry, though there are a few small springs in various locations. Given the narrow “bottlenecks” between the walls in a few places, I shuddered to think what it must be like on the canyon floor during one of those rare flash floods. 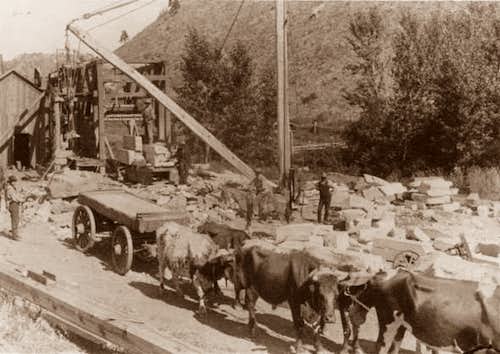 Historical Photo of the old Elm Creek Quarry Operations
Continuing on foot for quite a distance, we occasionally cleared pathways through a few other brush piles that blocked our way (and which would block the way for my host’s cattle in their never-ending quest for new grazing). While hiking down the mostly-dry stream bed, I was treated to stories about the old sandstone quarries in this canyon, the narrow gauge rail line that once ran on the route we were hiking and the ghost town of Odell, which long ago sat on the prairie at the mouth of Spring Canyon. 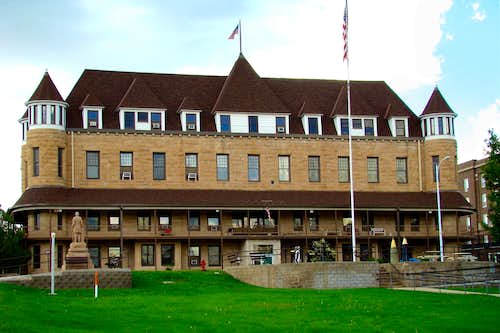 A local example of canyon standstone
These intriguing stories helped distract me somewhat from concern about the nearby lion’s den and what might be lurking in the nearby brush. Still, I was vigilant to keep checking what was going on behind us, while also watching for occasional rattlesnakes around the rocks. Thankfully, there were no encounters with anything live and dangerous.

In the late 1800’s, this canyon had a quarry that produced large quantities of high grade Dakota sandstone, some of which was used to construct many of those beautiful old sandstone buildings that can still be seen in the nearby town of Hot Springs. The Elm Creek Quarry, a couple miles to the north, also produced high grade Dakota sandstone. The sandstone in Spring Canyon was hauled out on the narrow-gauge rail line through the canyon and down to Odell and its connection there with the Elkhorn & Missouri Valley Railroad line that ran between Hot Springs and Rapid City.

I found it curious that Odell has never made it on many of the lists of South Dakota ghost towns. The town shows up on old maps and there was a Post Office there in the 1890’s. Odell also had some sort of prison or jail that used several small buildings, which remained for many years after the town was abandoned. The town has virtually disappeared now, and we did not have time or permission to hunt for small relics that might be left in the prairie grasses at the edge of the Black Hills. 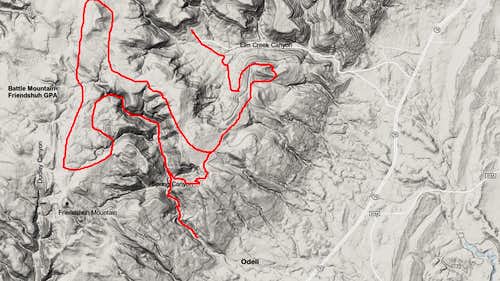 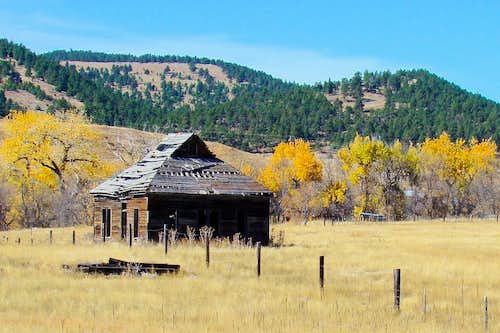 Abandoned Homestead
After running out of canyon floor permissible to explore plus seeing that the day was getting late, we turned around and went back to the ATV, then on to the ranch house, thus ending the day’s outing. To this day, memories linger from seeing a historical site that few eyes have opportunity to see anymore.