I’m almost ashamed to write this trip report. Why you ask? Well, it might have something to do with the fact that while I grew up in Utah County, this was my first trip up Box Elder. So, unless you’ve quit reading out of pure disgust for my alpine oversight, I’ll fill you in on a fantastic late spring summit of this beautiful mountain. Due to the arrival of my bouncing baby girl a few months ago, my wife has effectively negotiated an end to my soloing adventure days. Well, sort of, I still get to wander wild and free around the Mt. Timpanogos foothill areas stretching from Mahogany to Big Baldy, but the days of “I’m going here, I should be back by this time, if I’m not back by this time call the Sheriff” are basically over. I guess my point is I needed a partner for my Box Elder effort. There are a few options out there: Dean is always a fun partner, but I think he was busy climbing every mountain in Nevada in a 24 hour period. My wife Yvonne, but after the Silver Lake debacle of 2003 I couldn’t take her. So, I put in a call to Todd “IronMan” Baldwin of Buckskin Marathon fame. Todd was eager to go, and, he really is a decent chap to climb with—even with his freakish natural ability that comes despite zero training. 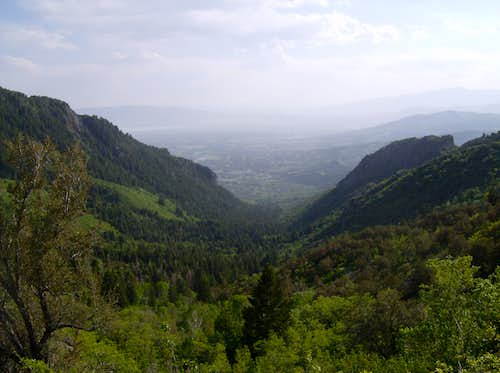 Todd and I agreed to leave at 7 am from Pleasant Grove in order to be on the Dry Creek trail (43) located just out of Alpine, Utah by 7:30. Our plan was to take the Dry Creek trail to the north ridge saddle, and then take the north ridge up to the summit. Our return route was to be left up to snow conditions, time, and curiosity. Or, in other words—we’ll just see what options are available once we’re up top. Unfortunately, I awoke a sleeping Ghangis Khan in the form of a three month old as I was sneaking out of the bedroom at 6:30 a.m. The hour of soothing that followed facilitated our leaving over an hour later than we had wanted. But, no worries, that’s how you have to roll when the little ones get involved. Boot was set to trail at 9 am on a beautiful mid-June morning. After a cold and wet May and early June, we were finally experiencing a bit of heat in the Wasatch. We expected a fair amount of snow up top, and my anticipation of the climb was mingled with a bit of apprehension about snow conditions. But since Todd’s mantra is, “We summit, there are no other options.” I realized he’d short rope me to the top if he had to. I put that feeling behind me and let the early climb excitement take over. You know the feeling: blue skies, alpine setting, a peak in the distance you envision standing upon….it doesn’t get much better. The early sections of trail were through a forested section with the sound of the swollen stream off to our left. Nothing too serious as far as elevation gain for the first mile or so, and soon we were enjoying a fantastic waterfall setting. 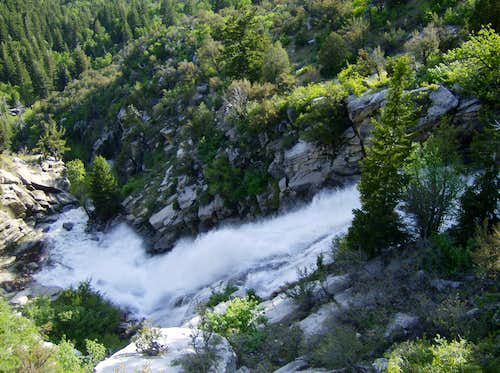 While I’m geologically impaired, I do believe the rock in the area was granite. We pushed on and the trail began switch backing a bit as we crossed a stream several times. Spring runoff was still very high and the cold water was moving fast. Todd danced across the slender logs placed over the water and I…well…I methodically made my way across. After an hour and a half of hiking (and a little exploration) we arrived at a fantastic camping spot that I don’t know the name of. We chatted with a group of guys from California and Wisconsin. After talking a little trash about the Lakers we bid them adieu and moved on. Here the trail forks with the left option taking you on to the second Hamongog. Not our destination, so we went right and continued gaining elevation until we came upon the meadow where trail 43 and 44 split from each other. It was a beautiful area, and after a little lunch of trail mix, jerky, protein drinks, and dark chocolate, we hit the trail again. It was also at this point that I tried what can only be described as “disgusting, yet strangely helpful.” It was a little shot of some sort of power gel, gu, liquid energy hybrid thing—nasty, but as the temps were in the high 80’s I needed salts and electrolytes a plenty.  Just after this point the trail became totally snowed over, but thanks to Garmin and a general sense of where we were going, we managed to stay right on course. The only trouble? We were now slogging up in slushy snow. I have finally found Todd’s kryptonite: Elevation gain in soft snow. Believe me when I say I enjoyed every minute of his vast array of complaints. “What’s wrong superman?” was all I could get out in between smiles. Todd muttered something I shouldn’t print in family friendly websites and we continued on. We soon caught one of the old CCC erosion lines cut into the side of the mountain and followed it up to the saddle. Talk about a view! The north ridge saddle might have been my favorite part of the journey. I felt as if I was at the connection point between the southern and central Wasatch. It was here we caught our first good look at what we were facing on the ridgeline. 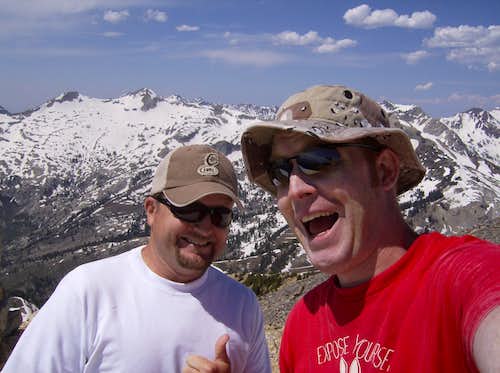 It’s discouraging when you realize you’ll be losing a decent bit of elevation before beginning the serious work on the ridge. What made it worse was the realization that the soft snow would seriously slow us down. But, as I have previously noted Todd’s mantra, we just slapped a high five and a little sun screen on, and off we went. I’m going to sum up our work up the ridge with as few words as I can: What took 2 hours and 30 minutes to go up, took just under 40 minutes to descend. I imagine that without the snow, or with hard stuff, the ridge would have been fairly mild. But with the slush, we were not making good time. Eventually we arrived at about the 10,300 foot mark and most of the snow was now baked off. Our speed improved considerably and soon we were making friends with a rock cairn on top that is as tall as I am. 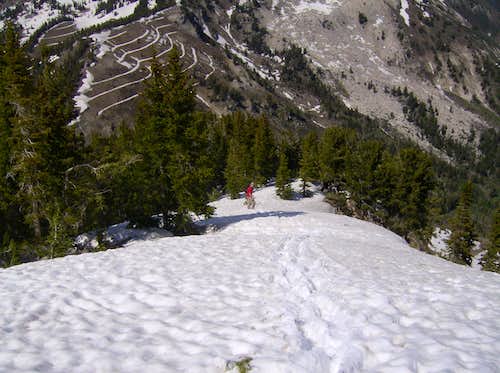 To our disappointment we couldn’t find a summit register…maybe we’re blind, but we couldn’t see anything other than some newly excavated rock by the cairn that held nothing. On every summit I always sign my name and the name of my little brother who passed away in 2006. Sorry bro, all you got was your name written in the snow by the cairn. Whoever gets up there next, please sign Jim Drake and Stephen Drake, June 17th 2008.  After spending about 40 minutes on top calling our wives, taking pictures, and getting a little more to eat, I looked at Todd and said, “JCW’s for dinner at 7 pm?” He said something to the effect of him being able to get down and back up with my cheese-fries before they got cold. Superman was back in the building!  We took off on what I can only describe as the best decent of my life (but not until I had fashioned a makeshift ice axe out of a sturdy piece of wood).

We soon hit the snow and it turned into a slush-ski, power-glissade, wonderfest of a descent. About half way down I was a little out of control—despite my makeshift axe—and came within about 10 feet of sliding down the east face to the Granite Flats campground. When 270 lbs of man and pack is moving fast in one direction…it takes a bit to alter that path. Not good, so needless to say I slowed down and was a bit more cautious. Todd and I made our way down the way we had come up. Todd wanted to bail down a few shortcuts, but I couldn’t get the fun of slush-skiing out of my mind, so, I convinced him to go the way we came. In no time at all we were back at the 43/44 meadow junction and were treated to the evening light as we made our way down Dry Creek Canyon. I love that time of day; the light was amazing and the scenery was awesome. Soon we were back at the waterfall taking pictures and exploring the granite. As we made our way down the rest of the trail we began passing backpackers on the way up. It was a great day! I may have my numbers and figures off a bit, but according to the gps—the total mileage was 11, with over 5000 feet of elevation gain (give or take with our exploration side trips). I can’t believe I waited this long for Box Elder!! A beautiful mountain, plus great companionship, equals good times in the Utah Wasatch range. And oh yeah, Pete is Todd’s nickname. 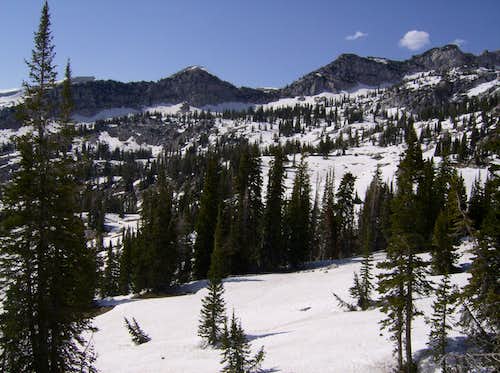 You are in the wrong profession, you should be writing for Saturday Night Live. Enjoyed this one immensely and I must confess I tried to go get Box Elder on Monday (from Granite Flat CG) but only made it up the trail a couple miles before the heat hammered me into retreat. I feel bad that I have been here in Utah county almost 9 months and still haven't climbed this puppy. Yes, and Lone Peak and Pfeifferhorn and North/south thunder and and and and...

Hey sounds like you guys had good times. That's what I love about the Wasatch-so many mountains and good company to climb them.