This is a big Dolomite group, less known than the near Tofane group but full of summits and much more complicated.

It has a lenght of about 13 km and its boundaries are :
south : Passo di Val Parola and Passo Falzarego
west : Rio Sarè (val Badia)
north : San Vigilio valley and Rio Fanes
east : val Travenanzes (beutiful for walking and hiking)

It belongs to the Natural Park of Fanes-Sennes-Braies and contains 3 subgroups (starting from south):

Accessing the Group can be quickly in 3 different ways :

Its typical structure is made of vertical yellow, red and black walls divided by some big horizontal ledges where some paths pass.
This was one of the most important area in the Big War (1915-18) and we can find here many ruins and many war paths (even digged in the rock) that join passes and ledges allowing various hiking routes (not always easy).
One of this, a long gallery (lamp required) passes through the Piccolo Lagazuoi (from near the top till half way to Forcella Travenanzes path).
From this summit an indented ridge goes eastward and, between the walls, some passes crossed by easy paths allow hikers to cross to Armentarola and Val Travenanzes valleys.
Growing from the upper plateau is the Lagazuoi Grande that contains 3 main summits (and some minor towers)
Lagazuoi sud (2835 m)
Lagazuoi di mezzo (2750 m)
Lagazuoi nord (2804 m)
on this summits, expecially on their west walls, many very fine climbing routes

Just to the north of Grande Lagazuoi, divided from it by the Forcella Grande starts the Fanis sub group

This subgroup has the same characteristics of Lagazuoi Grande as for walls, ledges and rocks.
This is a not linear structure (see map) that has 3 big ridges departing from Cima Fanis sud - 2989 m

the west branch is the strongest structure whose summits are :
Cima Fanis di Mezzo (2989 m - with its famous Gran Portale)

Cunturines group is a strange structure that I think unique in the Alps.
It looks like a big sweet basin surrounded by a not marked ridge if seen from interior side but, on its peripherical side it is falls down with huge wall somewhere very impressive. 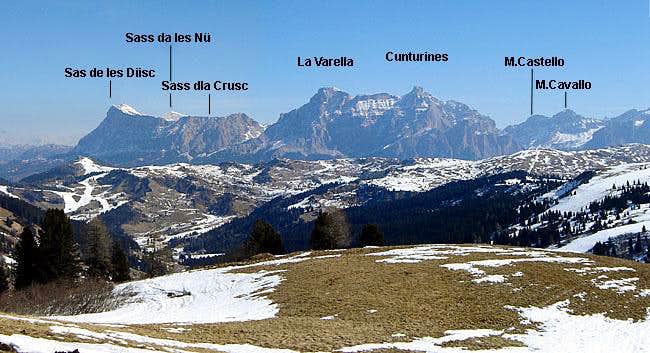 Starting from south we can identify a bulwark that divides the high mountains from their low part with a very big ledge, full with lot of vegetation, this is called the "cengia del Bandiarac"
On this ledge some difficult and somewhere dangerous hunting paths
This ledge is supported by some high and attractive (for climbers) pillars that are called :
Pilastri del Bandiarac

Just behind this structure grows the highest mountain on the sub group :
Piz dles Cunturines 3064 m

to the north of this summit a valley, containing a very fine lake (Le Dlacià = Iced Lake ), divides it from the La Varella chain.

This is a long high ridge that is the southern border of the basin.
On this ridge the main summit:
La Varella 3055 m

On the north of La Varella, after a high pass, Forcella de Medesc, starts the huge long wall of
Sass dla Crusc 2907 m

Then the scenary changes, and while external wall become less steep and easier to be climbed, the internal margings become uniform and smooth walls where easy and difficult climbs live very near each other with delicate balance games.
These summits are
Sass da les Diisc 3026 m

summer, some rock walls can be climbed even in June
in winter and spring, in the lower part of the valley bringing to Capanna Scotoni, some ice structures allow safe ice-climbing (sun never arrives here)

Rifugio Fanes is perhaps the best starting point for moderate and difficult ski tours in the whole Dolomites.

The comfortable hut is open from January until Easter.

It belongs to the Natural Park of Fanes-Sennes-Braies

no camping allowed out of authorized campings in val Badia

here I would like to host hiking images coming from each that has amused this area.
I'll make sections :))