2 Legit 2 Quit
Fay Buttress is a large white colored feature that looms over Fay Canyon which has its own trail head in Sedona. By Sedona standards it is an impressive objective.  The FAer’s of 2 Legit 2 Quit gave it a IV alpine rating even though this route can be climbed in a short day by most competent parties. The hike to the end of the canyon is mostly on trail and the bush whack up the canyon is not that bad, relative to Sedona. The climb itself is only five pitches of which the first and last pitches go quite fast. The summit offers one of the taller view-points in all of Sedona.  Spies, Bartolleti, Feguson and Domaska established the route in 2012. They were no doubt attracted to the huge roof that makes up the crux of the route. They did a poor job in bolting pitch four and until that gets rectified I doubt this route will get climbed/cleaned much. 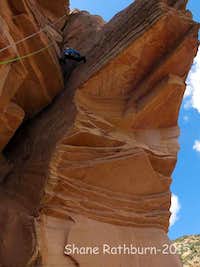 3rd Pitch
On the few ascents of this route recorded to date, I see where someone has recommended skipping the first pitch because of the slightly longer hike up canyon. However, I thought this pitch and subsequent ledge, added character to the route. It is a short corner pitch on decent rock in comparison to the rest of the route. The long ledge it reaches is a cool geographical formation. The second pitch splitter/flake would be a stellar 5.9 lead in good rock, but the choss factor on this pitch is unnerving. The third pitch is an outstanding wide climb with a short off width problem that is damn cool with awesome exposure on the edge of a massive roof. The fourth pitch has real safety issues and needs to be retrofitted in the near future.  One bad bolt needs to be removed and either redone or haul up an extra C4#5 and/or #6.   Another bolt needs to be added at the beginning of this pitch to avoid a potential serious fall on suspect face holds. I also recommend moving the fixed belay atop pitch three to avoid serious rope drag on pitch four making a potential fall safer as well. The last pitch is uneventful. 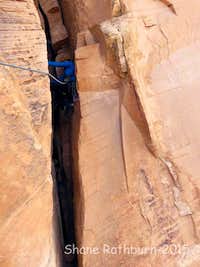 3rd Pitch
Park at the Fay Canyon trail head. To reach the trail head, drive down Dry Creek Road to its dead end. Turn left on Boynton Pass Road. Turn left again staying with Boynton Pass Road. Fay Canyon trail head will be on your left. Cross the road and hike to the end of the trail at a forked wash (maybe a mile). Take the right fork and stay in the wash. Right before the very end, turn left as the wash bends left beyond (north) the actual buttress at this point. There is a cliff dwelling at the very end but you will not see it if you stay in the wash.  If you want to see it, take five more minutes heading north instead of bending with the wash and then you can cut back into the wash from the dwelling site. The entire approach takes over an hour for fit parties.

1st Pitch- 80’- 5.8/ Starts on the east face. The FAer’s talk about this being a lay back pitch, but there is no lay back required. Walk the 4th class traverse left to the base of a straight up right facing corner. Good crack climbing (mostly hands) and right wall features lead up to a small chossy roof. Move out left under the roof onto the face with good edges to the large walk-about ledge above with a fixed anchor. This is a fun and uneventful pitch.

Move the belay by walking to the very left end of the large ledge.

2nd Pitch- 130’- 5.9/ There are two options to start this pitch. You can run up the easy, but chossy, short right facing corner (just left of two bolts for a direct variation called Hey Hey Walk, 5.11) and then walk past a cactus around left to the south face to the start of a left leaning crack system.  Or from the large traverse ledge just scramble further left and back right around a tree to the base of this same crack (avoiding choss and a cactus). This left leaning flake/crack system leaves much to be desired in terms of rock quality. The climbing is sustained at the grade as the crack arcs more aggressively to the left as your trust in any facial features is at a minimum. The final mantel onto the large ledge above is athletic.   A fixed rap station is at the far right end of the ledge.

3rd Pitch- 60’- 5.10/ No question this is the pitch you came to climb on Fay Buttress and no doubt what attracted the FAers to this line. Down climb via two foot/hand rails and traverse right into the wide chimney. The pitch is run-out but secure and easy until you clip the first bolt. Chimney up past this bolt until right below a massive roof. Clip another bolt and traverse out of the chimney and catch a solid left shoulder chicken wing in the off-width above as you transition (crux) from facing out to facing in (from chimney to off-width; from in to out). The next few meters (another bolt) involve strenuous off-width moves at the grade until face features on the inner wall start appearing. This pitch is well protected through the crux by the fixed gear. Continue up easier ground to a ledge and a fixed station (but no rap set up).

4th Pitch- 115’- 5.10R/X This is a dangerous pitch and needs further work/examination by the FAers to make this a more sought after route. Leave the wideness above and traverse out to the right face via a ledge (30’-40’ and eventual rope drag). There is a bolt up on the face that requires several meters of exposed face climbing trusting suspect sandstone. A fall here on lead would result in major injury. The climbing is not hard as much as it is vertical and requires trusting the holds. Once you clip the first bolt, the pitch goes safe. The next few meters through another bolt involve face climbing at the grade. Enter a chossy crack (C4#5) and continue to trust suspect holds as you mantel up onto the ledge above this wide crack (bolt). Continue up the right side off-width option (C4#5) past a bad bolt (2015-sticking out half way), eating sand, slinging a suspect small chock stone (falling apart in 2015) and struggling with rope drag before another mantel to the ledge with a rap tree. With the initial rightward traverse (with rope catching features) and then the leftward traverse at the end, the rope drag can be enormous on this pitch, extend every possible placement. This is one of the worst thought out pitches I have climbed in a long time and detracts from the rest of the route.

5th Pitch- 100’- 5.8 This is a relatively easy pitch to just below the summit of Fay Buttress. Mostly chimney up to a large ledge with a fixed rap anchor. Take the rope off and 3rd class it to the summit.

Rap from the top of the 5th pitch to the top of the 4th pitch. There is a rope that will not currently pull at the top of the 4th pitch (2015), we rapped on it and tried to get it down but did not give it much effort. This rap needs to be extended out and over the lip or you might face the same issue in the future depending on your rope.  With a 70m rope, you can just reach the top of the 2nd pitch. The third and fourth pitch lengths as stated above take into account two traverses. This rap puts you dangling in air just above the end of your rope at the top of the 2nd pitch.  Knots are advised.  By bumping the large roof with your leg on the way down, it should give you just enough sway to just reach the chains atop the 2nd pitch.  Take another 70m single rope rap straight down to the long traverse ledge you moved the belay on. One more single rope rap from atop pitch one gets you down.

70m rope. Helmet for the choss factor, particularly on the first couple of raps. Double to C4#2 (mostly for the 2nd pitch). Single #3. Double #5’s (I would prefer 2 #5’s needed for the 4th pitch over double #4’s). Small set of wires or off-set cams. The first pitch is east facing. Second pitch is south facing, then back to the east.  Dress accordingly. A hiking pole helps on the slog up the canyon.