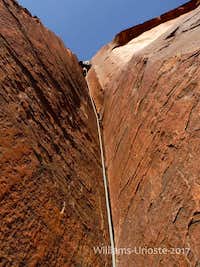 Dow leading the 3rd Pitch
Fear and Loathing is one of the more obscure routes in Red Rock if for nothing else than its approach to climbing ratio. It takes a 2 hour approach to reach just two pitches of solid 5.10 climbing with little else worth climbing in close proximity. The descent down Gemstone Gully via a few raps and plenty of bushwhacking is no quicker than the approach. Therefore it is a full day in exchange for a couple of pitches of climbing. But if you, like my partner and I, have climbed most of the trad routes within your ability at Red Rock, and are in desperate search of something new and interesting, Fear and Loathing is worth the effort. There is a Fear and Loathing sport climb in Calico Hills not to be confused with this route. Richard Harrison and Nick Nordblom established the route in 1982. 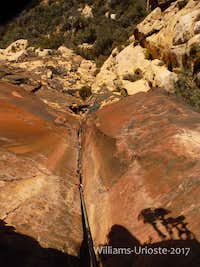 2nd Pitch
The first pitch is an approach pitch that lands a ledge below the obvious crack system above. The second pitch is the technical crux of the climb with a few awkward moves at the grade. The third pitch, as beautiful as it is, is a fairly straight forward stem corner pitch more in the 5.9 range than 5.10. Handren’s guide, or at least his first edition, has this route completely confused with another, in regards to gear, descent and description. A local clown by the name of Killis (he posts under may avatars at MP.com) will lead you to believe the approach is “heinous”, when in reality it is quite pleasant if not long for the amount of climbing involved. He also does not climb anything above 5.8 clean, so don’t let his description intimidate you regarding this route. Josh Thompson, who contributed the route to MP.com, exclaims this is one of the top three crack climbs at Red Rock, but I would not go that far the other way either. However, it is a worthy objective if you have climbed out most of the 5.10 trad climbs at Red Rock.

Park at the Pine Creek trail head and get on the trail. Turn right on what is named Dale’s Trail. It may not be signed, but basically it is the trail you intersect after not even a mile on Pine Creek at several iron posts. Follow Dale’s Trail north until you can ascend the gully to the north of Gemstone Gully (on the north side of the protruding formation on the east side of Bridge Mountain). Look for cairns.  The local hiking club has cairned a faint trail that leads to within meters of the climb itself. Pass through, to the south, a notch (hole) from this north gully onto the top of Gemstone Gully proper. Hug the right wall and descend into a cool slot (photo) that leads down to a narrow gully that starts the very top of Gemstone Gully. Do not stay in this gully, rather cross it and go up the other side, following well placed cairns (2017) until you see a short thru-cave (photo) on your right which is at the bottom of the route. The first short approach pitch goes up the left side of that feature. Some bushwhacking is involved, but not much.

2nd Pitch- 100’- 5.10+/ Take on the beautiful finger corner which opens up to intermittent hands as it steepens into the solid varnish above. Fingers, ring locks and small hands (crux) lead up to a wide bulge section. There are quite a few features for stemming opportunities. Some could argue this is more 5.10- than 5.10+ depending on what you are used to. At the top of the bulge is a small ledge below a fantastic hands dihedral right facing corner.

3rd Pitch- 220’- 5.10-/ MP.com calls for all kind of gear, but I led this entire 220' on triple C4#1’s through #3’s with no need for any other gear. Start up the dihedral and it will gradually get wider to the very top. Eventually it turns right on much easier ground to a large ledge below a relatively easy wide crack. Finish to the top and sling a block. Andrew Yasso on MP.com referenced he thought this pitch was 5.10+ as well, but I felt it was closer to 5.9+ than the grade published. Very straight forward and mostly hands and stemming. He also mentioned to bring four #3’s with double #4's, etc. but that would be overkill for most leaders comfortable at the grade.

Biner approach shoes to your harness. Scramble back down skiers right. The local hiking climb maintains a scrambling trail (2017) with cairns and cuttings. Eventually you circumvent your way back north to the base of the climb. We descended Gemstone Gully via a ton of bushwhacking and approximately three 70m single rope raps (two back to back).  It might take no less time retracing the approach trail. Handren’s first edition is off on just about everything on this route. There are no required raps from the top of the wall back to the base as per his beta.

MP.com recommends doubles to C4#4, but I found no need for the #4’s. The first edition of Handren’s guide is completely off on everything regarding this route, I have no idea if he corrected it for the 2nd edition onward. In any regard, triples from C4#1 through C4# 3 will protect the 3rd pitch’s 220’ for the competent leader. Someone on MP.com mentions a C4#5, but if you are competent at this grade, there is no need for gear this large. Beyond that, a single rack with wires or off-sets to supplement will be adequate to cover pitch 2. This routes is southeast facing with little to no wind, so it can be a furnace if temps are too warm.