Ferrata Lipella can certainly be ranked high on top of the most prestigeous ferratas of Dolomites. It is variety which is most characteristic for it. The entry through a long World War I tunnel, a very high W wall, which is climbed ledge by ledge, finally a short summit ridge. All with a great, most wild mountain scenery around. 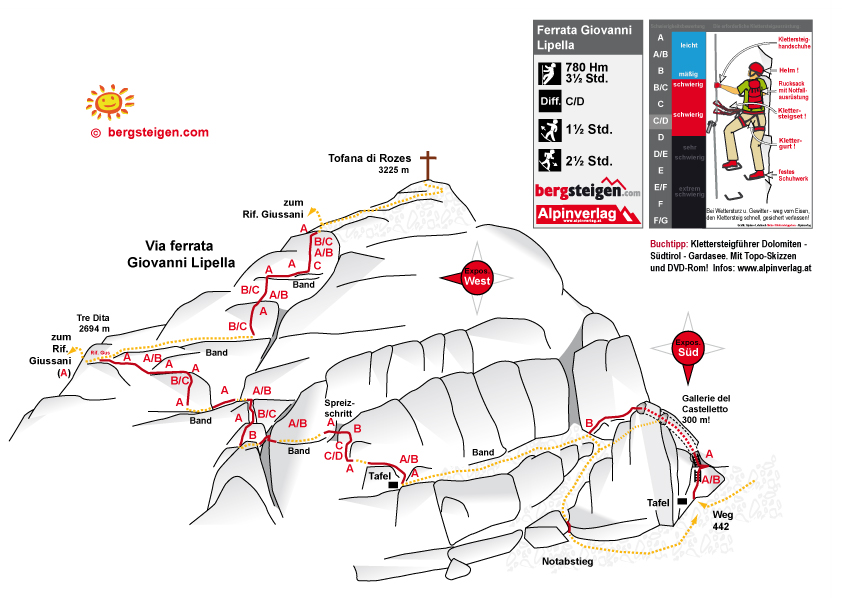 The ferrata was opened in 1967. Its difficulty is rated C/D, which means a difficult ferrata route. It requires mountaineering experiences and already quite some power in hands. In addition to that, due to its length also very good fitness is required.

The overall altitude to overcome is around 1500 m (due to some losses of altitude). Out of that, only the ferrata part is close to 800 m, which is really a lot. The overall ascent time will approach 5 hours. To that you need to add at least 2 h 30 min for a safe descent by the normal route.

The slopes of key ascent are west oriented. That's fine if you start the tour early enough. Due to the summit altitude seriously consider snow conditions. In early summer snow rests can prevent a safe climb and also in high summer the summit regions can receive snow fall whenever weather deteriorates. Consider also the popularity of Ferrata Lipella and avoid coming on the tour on weekends, if possible. Rockfall, caused by climbers above you, is also a serious danger.

You start the tour in Rif. A. Dibona (2037 m), which can be reached by a narrow road from the main road Cortina d'Ampezzo - Falzarego Pass.

From Rif. Dibona take the marked path No. 403 (towards Forcella Fontananegra), but after a few minutes turn left (westwards) by the route No. 442 (well marked - Grotta della Tofana and Ferrata Lipella). Over the screes the path soon reaches the base of the monumental South wall and the path No. 404, coming from the right. Now you continue by No. 404 westwards, always beneath the southern wall (anyway you have no other choice). 1 h till here.

Reaching the base of the Castelletto (a small south-west tower of Tofana di Rozes) you enter the mountain - by a tunnel, made during the World War I. Here you need a torch, because the tunnel is 500 m long and in some places it is going steeply upwards. You reach a daylight again on the ridge of Castelletto (altitude: 2620 m) and now you must descend a little to the real beginn of Ferrata Lipella (marked by a table). From this point it is still possible to escape down on Forcella Coi del Bos (from there you can ascend also up, thus avoiding the tunnel). 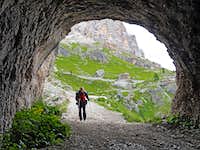 On the road to Forcella Col de Bos 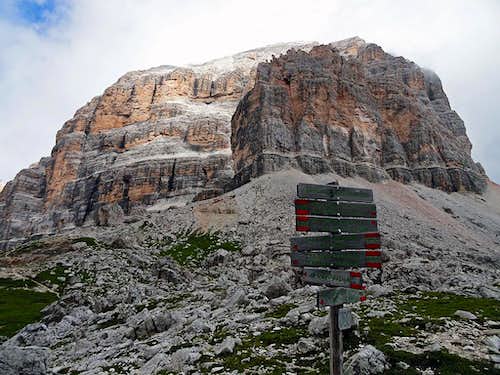 You start the tour at Da Strobel house, 1985 m. The path No. 412 enters comfortably into the woods and fist ascends very gently towards the NE. Then it gains some altitude and in some 20 min you reach mountain roads. On the crossroads just continue up in the same direction (NE). The marks are still No. 412. After exiting a short tunnel, you will see the road winding up in long turns, but you can take a marked path, ascending directly up. In the northern direction you go up on Forcella Col di Bos, 2331 m. Some 1 h 15 min till here.

From the saddle you have two options. The right one (No. 404) is the main "Via Dolomiti", crossing the southern slopes below Castelletto. In some 15 min it brings you to the entry in Castelletto galleries - thus joining the approach from Rif. Dibona. The second option goes towards the NE (and later E and SE), around the western side of Castelletto. After ascending the rocky section, you reach the real start of Ferrata Lipella, avoiding thus the tunnel. This route is also the escape route for those who come from Rif. Dibona through the tunnel and for any reason don't want to continue on Ferrata Lipella. Some 30 min to the ferrata entry. 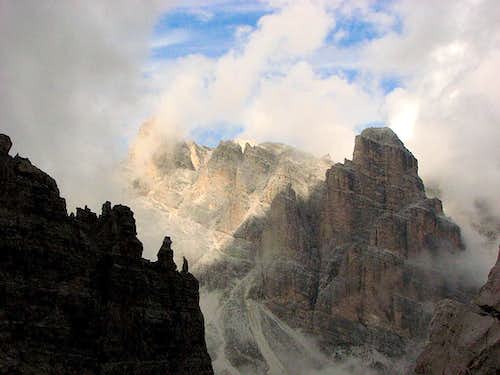 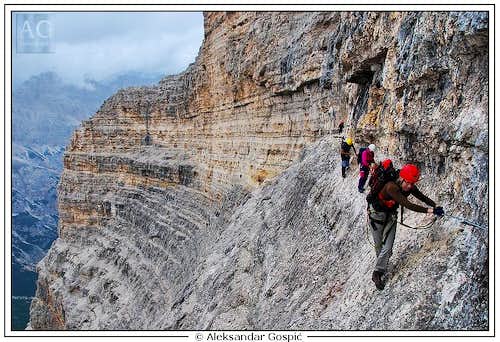 The path now crosses the whole western wall of Tofana di Rozes by sometimes narrow, sometimes comfortable bands. Unfortunately you don't gain much of altitude, but the scenery is great. You are in the middle of the monumental wall, on the other side of Val Travenanzes you can admire the walls of the South Fanes Spitze (2980 m) and you must also keep eyes on the path and take care of other climbers' safety. So you arrive to the very northern part of the western face - to the towers of Tre Dita (Drei Fingern, Three Fingers, 2694 m).

By Tre Dita you have the option of leaving vertical walls. But if you wish to reach the summit, this option would take you to the middle of the north-east slope and only there you could again turn upwards. And you probably don't wish to go around the whole mountain to reach the top! That's why it is recommended to return into the West wall and continue towards the top.

So, the Ferrata Lipella turns at Tre Dita sharply to the right, goes over a few bands to a small amphitheater and than steeply, in some cases almost vertically up towards the north-west ridge. Now you must be already tired a bit, pegs and cables are often wet there and you must be very careful not to make a fatal mistake. The climb ends on the altitude of 3027 m, where you reach the NW ridge.

The ascent on the summit is not difficult anymore, there is only steep scree and eventually in some places snow rests. For the whole ascent you will need about 5 hours, only the ferrata will take you 4 hours or more.

Of course it is best to descend by the northern slope (normal route) and over the Forcella Fontananegra to the Dibona hut.

The ferrata gear and good shoes. If it is early summer a snow axe is necessary for the descent over the northern slope. And don't forget the torch for the tunnel - you will never get through if you forget it. High altitudes require warm clothes. Never underestimate weather deterioration, which can on those altitudes quickly result in snow fall or temperatures below zero. Storms are dangerous in every ferrata.