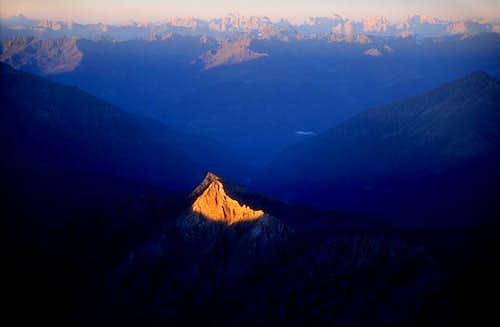 In almost every tour skiing guidebook Figerhorn would be found as one of the most rewarding, easy goals. The mountain stands just north of Kals, the town which represents the southern gate to the famous Grossglockner. When approaching the town in winter or spring, a beautiful, gentle enough southern slopes of Figerhorn immediately catch our eyes. The mountain is just as made for skiing - why there are no cable cars, we ask ourselves? And luckilly there aren't any. Well, from Kals, 1324 m, you would have quite some altitude difference to the top. But there's no need to do it, because the mountain road reaches Lucknerhaus, 1918 m, so almost everyone does the tour from that trailhead. So, Figerhorn is also one of those cute summits which can offer you a short, less than half a day tour, which can fill-in the time between bigger mountaineering achievemnets.

Figerhorn is the first higher summit in the long ridge which borders the famous Koednitztal on the western side. North of Figerhorn this ridge reaches the highest point in Freiwandspitze, 2919 m, and then after Fanatkogel, 2905 m, lowers again on a broad saddle where the well known Stuedlhuette stands. The eastern slopes of Figerhorn are steep and rocky and also the western side of the ridge is quite steep. From the summit of Figerhorn by the ridge towards the north no marked path goes.

The summit is also a wonderful lookout point. Well, for the Glockner group its altitude is not high, so except towards the south, the views around are soon obscured by other mountains. But these are nice and especially the sharp Grossglockner is shown from Figerhorn in its full beauty. Nice are also the views on the neighbouring groups of Granatspitze and Hochschober. 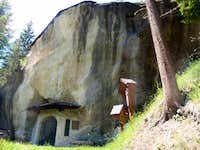 See the parent page of Grossglockner group how to reach Kals. From the main valley of Isel river you deter towards the northeast in a small town of Huben. From Kals up towards Koednitz Tal a good, payable mountain road goes, finally reaching a big parking place on 1918 m. From Kals also a hut taxi drives till there.

If someone would like to do the whole ascent from Kals, the other trailhead is in Burg, just north of the town. 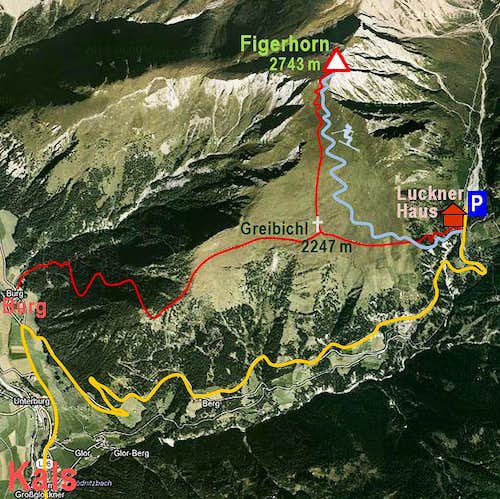 1. The tour from Lucknerhaus hardly needs any description. By the hut, 1918 m, we follow a good marked path which starts ascending through the woods towards the west. In the beginning it is quite steep, but the first 200 meters are quickly below us and we already reach the broad meadows, called Greiwiesen. The summer path continues there towards the west, but if we ascend with skis, we shall probably start turning in a long arc towards the north, towards the summit. On Greibichl, 2247 m, also the summer path meets the marked path which comes up from Burg/Kals and jointly they turn northwards. Just before the summit we reach the western ridge and ascend by it on top. Some 2 h 30 min from the parking place, all the time easy.

As we said, the winter ascent goes mostly by the same route. But on the approach on the western ridge and soon afterwards on top, the slope gets quite steep. In hard snow it requires additional attention and an ice pick can be useful. Also skiing down by that small section requires a better than only basic technique of skiing. Otherwise the whole ski tour is easy. The last part of the downhill is also not problematic, because for getting through the woods we can use the cart road, descending from Greiwiesen.

2. The second marked path starts in Burg, north of Kals, on 1431 m. It goes into the ravine of Burger Bach, but soon exits it towards the east and after gaining quite some altitude, also reaches Greiwiesen. On Greibichl it joins the route #1 and goes northwards on top. Some 3 h 30 min, in summer conditions easy.

For the ascent itself we don't need any hut. Otherwise at the trailhead there is the big Lucknerhaus, 1918 m.

We can ascend Figerhorn in virtually any season. Only in hard winter and very deep snow the tour can get problematic. If we are on a ski tour very early in the morning, we should also take into consideration that the western ridge and summit slopes can have hard snow.