The ascent of the first climbers on Montaž is a great combination of a nice hike, crossing the mighty west wall by a picturesque ledge and easy climbing by a steep ravine. Actually the Findenegg route is ony the upper part, above Bivouac Suringar, and, strictly speaking, also the approach by the big ledge from Forca del Disteis. A beautiful combination from the south is the ascent over the Findenegg route and the descent over the normal, south route (see the description in the opposite direction). The Suringar bivouac can also be reached from the north (Via Amalia), and by the Western route, but those two ascents are much longer and higher.

Difficulty: In the upper part it's an easy climb of UIAA I degree (two short details of degree II). The route is all marked, but from Suringar bivouac on, it is not protected. The rock is limestone and is quite brittle. On the Swiss Hiking Scale its difficulty would be graded T5.

Orientation: No problems till the bivouac, later you carefully follow the marks in order not to climb into more difficult terrain. Map to be recommended: Tabacco No. 18. 1:25000.

Exposition: Some places are very exposed, so the tour is not appropriate for people suffering from vertigo.

Objective dangers: In the ravine, the usual care is needed regarding falling rocks. Snow on the big ledge in early summer can be dangerous too. And never go on this tour in danger of storm and lightning (the summit ridge and the descent by the east ridge)!

Gear: Good shoes and poles, for less experienced a short rope (20 m) might be useful.

Tour start: The end of the road on Malga Pecol, Altipiano del Montasio, 1520 m (reachable from Sella Nevea). See more about the approach on the parent page!

Mountain huts and bivouacs: Rif. Brazza (1660 m) on Altipiano del Montasio and Bivouac Suringar, 2430 m, on the big ledge in the west wall. 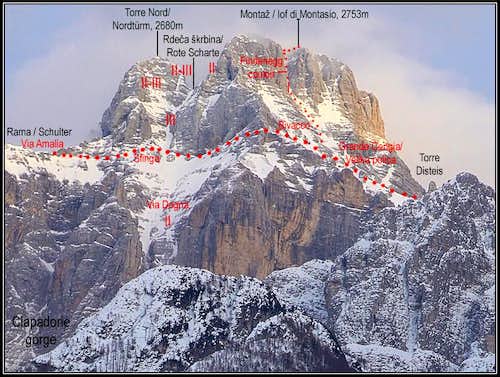 The upper part
From the Brazza hut you follow the marked trail over alpine meadows towards the north-west. The foot of rock walls looks near, but the magnitude of Altipiano del Montasio makes an illusion. For 550 m of altitude you will need a bit less than 2 hours to reach Forca del Disteis, 2201 m (notch), where the crest from Monte Cimone is attached to the Montaž massif.

From Forca del Disteis we must find (it is marked) the enter on a system of bands, leading into the south-west wall of Montaž. We first cross the start of a ravine, which disappears below us in the depths of the wild Clapadorie gorge, then we climb up (degree I). Soon we reach the foot of a high, remarkable tower (Torre Disteis), guarding the continuation of bands. Beyond it, the bands broaden and by a comfortable ledge, going horizontally above the completely vertical walls, we walk on some sections with hands in pockets, on others by narrow and exposed ledges to the Suringar bivouac (2430 m). 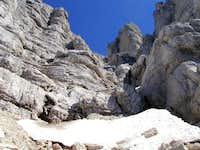 Already before the bivouac we turn sharp to the right and attack the upper part of the magnificant west wall. We scramble over rocks and ledges, the route is marked. Soon we pass a big cave (Caverna Brazza), where first climbers spent their lonely night. We continue in the same direction and soon reach the bottom of a big rocky ravine, named by the man who first ascended Montaž - Hermann Findenegg from Villach (Beljak). We first use the left side, when the ravine becomes narrow we go by the bottom (a short vertical section of degree II), later we cross to the right side. Where the ravine branches, we continue by the left branch. The route is marked, but not secured, so we must carefully climb (one more detail of degree II), because rocks are rather crumbly. On the upper part of the couloir we turn again towards left and reach the main ridge. An endless panorama opens towards the north, and to the summit we have only a few minutes over the north ridge.


An Intermezzo From Skiers...

Here, I'd like to share with you some beautiful points from the web diary of Marijana Cuderman & Marko Kern, from the winter tour in which Marko was skiing down the Findenegg couloir:

Really interesting is the passage around the edge, which in us allways triggers a distinct emotional shift. On this, other side of Montaž, the whole civilisation noise in a moment is lost in the endless silence above Dunja, which could be cut with a knife. With words I can not describe this wonderful feeling, when all lite you are hovering on the 'forgotten' side of the mountain.