Finding the Cure for the Shutdown Blues

December 1996: My girlfriend at the time (now my wife) and I were all set to head off on a trip to some national parks.  And then the federal government shut down, closing the parks with it. Or rather, some ideologues shut it down, showing a willingness to mess with people's plans and livelihoods in order to score political points. While I merely had to deal with what in the big picture was for me just an inconvenience, other people missed something from their bottom lines as a result of the plans I and surely thousands of others changed or canceled. Way to go, ideologues!
In order to avoid seeing the comments section of this trip report devolve into political shit-slinging, I'll refrain from naming specific people and stating which party I blamed and still blame. But imagine my utter disgust last fall when ideologues orchestrated another shutdown shortly before a trip to Rocky Mountain National Park that my wife and I had planned out several months in advance. Hoping for a restoration of reason, especially since a holiday weekend was coming up (around which I had planned the trip), I waited as long as I could before canceling reservations in Estes Park and making alternate plans for places not affected by the shutdown, but in the end my money went elsewhere instead of to that town already reeling from the September floods that caused so much property damage and lost tourism dollars.
Again, way to go, ideologues!  You pushed me into hurting the kinds of people you claim to revere.
Then came a glimmer of light-- Some states had asked the federal government if they could open some of the parks in time for the holiday weekend, paying for it with state funds.  Yes, they wanted reimbursement from the feds as part of the deal, but the idea was still a welcome and sensible one.
If I recall correctly, those states were Arizona, Colorado, Utah, and South Dakota. This was not without some irony. But I guess priorities changed a bit when it suddenly occurred to them that their own residents were suffering from the impacts of the shutdown. Who would ever have imagined? As they say, all politics ultimately is local.
More light-- Rocky Mountain was one of the parks the state governments wanted to reopen, and the feds agreed to the request. We were back on!
It was too late to change hotel reservations back to the original plan, but we were staying a little more than an hour from Estes Park, and we decided to make day trips up to the park. 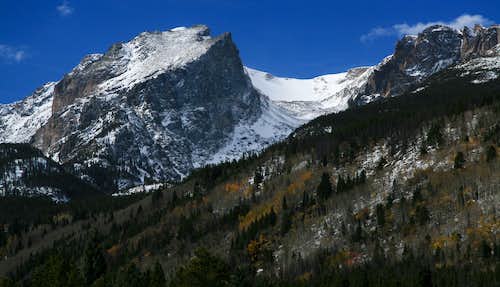 Hallett Peak and Some Fall Color Left
At noon on Saturday, October 12, the gates were to open. Arriving about half an hour early, we found to our delight that they were already letting people in.  It was a beautiful fall day, with some golden aspens still about and fresh snow on the peaks, and we drove to the Bear Lake trailhead, normally jammed between Memorial Day and Labor Day and on holiday weekends but this time pleasantly uncrowded. Over the next few hours, we hiked past popular Dream Lake to Emerald Lake and detoured to Lake Haiyaha as well. How wonderful it was to be out on such a day in such beauty! 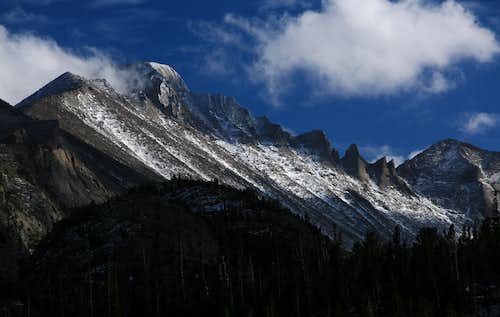 Longs Peak
No trip to RMNP is complete without stopping to watch the elk around Moraine Park and in the town of Estes Park itself. 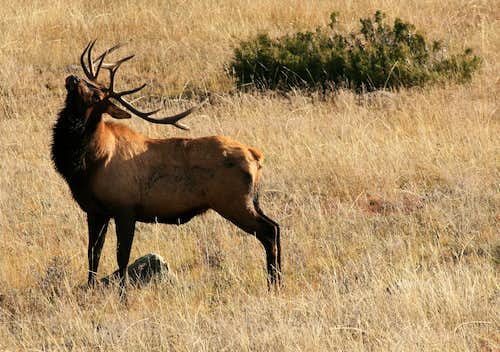 The next day was my birthday, and I wanted to get out earlier so we could do a longer hike. This time we parked at the Glacier Gorge trailhead, another often-jammed one, and headed up to Loch Vale and from there past Timberline Falls to the Lake of Glass (also called Glass Lake) and Sky Pond, two of my favorite lake names, and places I hadn't seen since 1997.
It was another lovely day. In past times that I have hiked the trails here, I've always sped by Alberta Falls because of all the people there, but there were only a few others about this time, and I finally took some time to appreciate the falls, which are pretty, though nothing spectacular, but still worth a look. 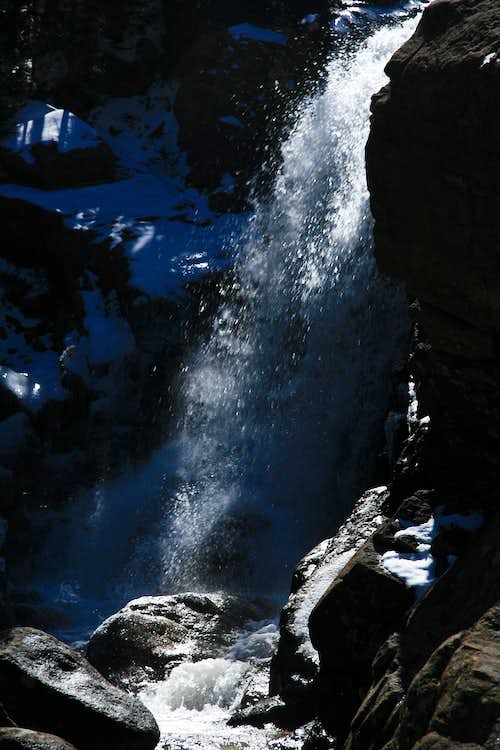 Alberta Falls
When I hiked to and past the Loch 16 years earlier, I didn't take any pictures because the sun was on the west, and more scenic, side of the lake at the time of day I was there. Consequently, I'd forgotten what it looked like and was nicely surprised. 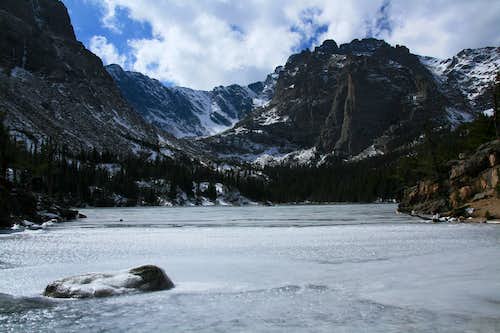 The Loch and Taylor Peak
While we were there, we saw a few other groups, but it was nowhere close to busy, and it also seemed that everyone else was turning around at the Loch instead of heading on, which in a way was a shame because there was such great scenery not far ahead, but I wasn't complaining about the prospect of having two spectacular alpine lakes to ourselves.
A little past the lower end of the lake, it became obvious that not too many others had ventured further since the reopening the previous day, for the snow became deeper and the footprints became fewer.
Some trail descriptions will warn you that although the hike to Lake of Glass and Sky Pond is a trail hike, there is one scrambling section at Timberline Falls. This is true. Because trail descriptions are for hikers, not for scramblers and definitely not for climbers, these warnings tend to make the scramble sound more intimidating than it truly is. In dry conditions, it is an easy Class 3.
When coated with snow and ice, though, it becomes a different matter, and such was its state when we got there, and more ice than snow at that. Thus the dramatically reduced trail traffic. Typically, normal people do not relish scrambling up ice. 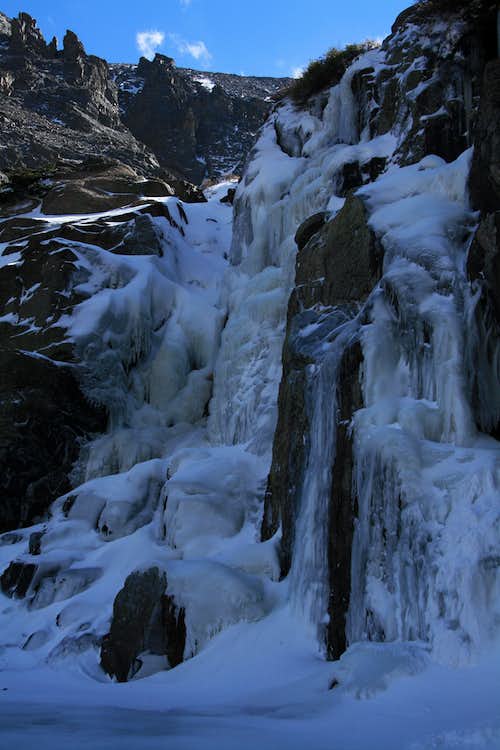 Timberline Falls
Had my wife been there alone, that would have been the end of the hike for her. In fact, it was the end of the hike for two young ladies who came up behind us. They said they were experienced hikers and peakbaggers (they also were pretty cute, and I was making some sadly predictable naughty assumptions of which my wife would have disapproved), but even though I went first and pointed out the best way, they wanted none of it after the first few yards and decided they were done.
For reasons I still don't understand-- maybe it was her birthday present to me-- my wife stepped out of character and agreed to continue on.
Wait a second...slapping myself here. Of course I understand why. The other ladies turned back. Is it necessary to say more, or do you get the picture? This was the mountain version of one woman tearing another one down with catty remarks. Males, ever the foolish sex (and one could say fools for sex), find different ways to best each other. For example, we fancy that drinking bad beer from a teammate's smelly boot, and following it up with a guttural scream while having friends punch our bare chests, will show women how irresistably masculine and virile we are. Then we scratch our heads over why the hot girl leaves and hooks up with the quietly smirking guy who stood in the corner all the while. Well, he was the last man standing, and in more ways than one.
(Slapping myself here again to get back to the topic and avoid turning this into some kind of low-rent porn...)
Although she needed a little guidance and encouragement, my wife got up the icy pitch.
After that, the footprints vanished. We were to enjoy the small but satisfying distinction of being the first humans to the Lake of Glass and beyond since the start of the shutdown.
And I was the first to Sky Pond, for my wife declared herself satisfied at Lake of Glass. 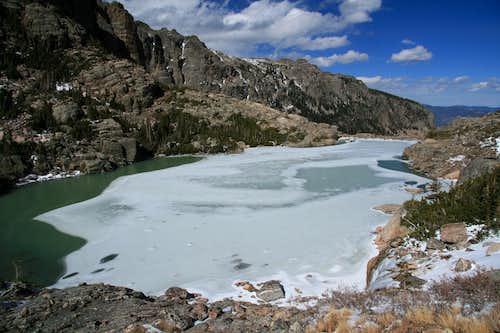 Lake of Glass
Even though I told my wife how awesome the setting of that last lake was, she wasn't interested in trudging that extra 10 minutes or so to the lake. So I took my own way, on the opposite side of Lake of Glass that the trail goes so that I could take advantage of the sun's position for pictures, and then I enjoyed that frozen gem and the tiny tarns close by, all under some of the park's iconic pinnacles such as Petit Grepon and the Sharkstooth, until I was ready to head back. 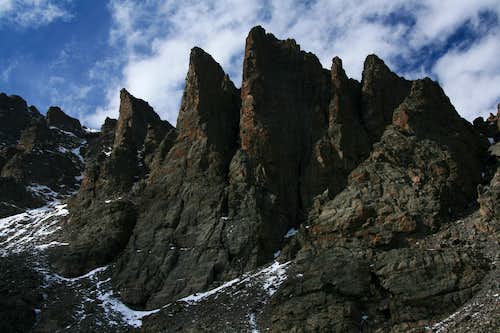 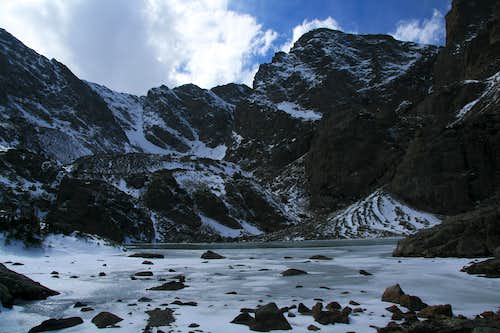 The next two days were not so nice: cold, snowy, and windy. We tried hiking to Chasm Lake but turned back after timberline because of high winds causing whiteout conditions. The following day, we went to Wild Basin and hiked to some waterfalls there.

On our last day, we drove south to I-70 and hiked up Herman Gulch to Herman Lake before begrudgingly making our way back to the airport. Weather was so-so but definitely better than it had been the previous two days. 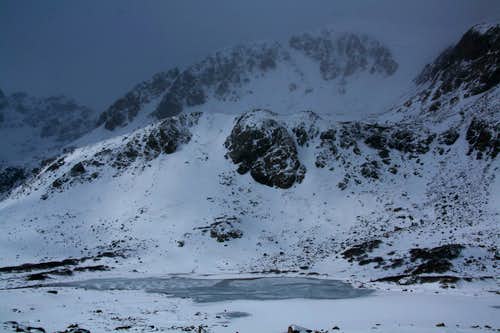 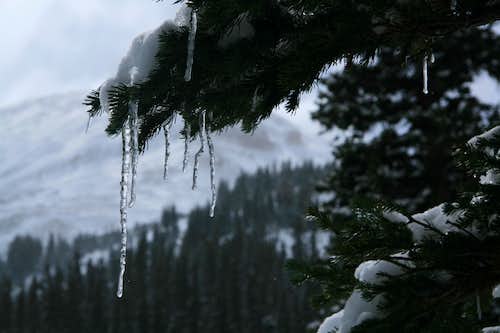 Winter Is Coming
But we had those two glorious days, no thanks to the ideologues holding this country's politics hostage day after day after day.