Finding Wyoming in Colorado: A Long Weekend in the San Juans 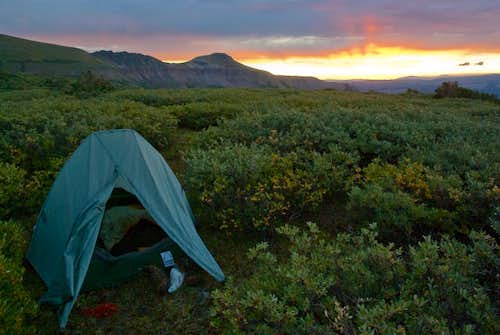 Hiking season's not quite here yet, so I figured this trip report from Labor Day 2011 might help ease that last little bit of waiting. Enjoy!

Everyone in Denver wishes he’d spent some time in the San Juans. Just talk to anyone in the hiking community around here and the story’s the same: “Oh yeah, I’ve been meaning to get down there for ages. Just never had the chance.” At six hours in drive time alone from the Front Range, even the nearest peaks aren’t very doable in a weekend. And the 14ers that draw the most folks require at least a day-long hike beyond the trailhead. The rest of the range is similarly remote.

Still, this being Colorado, when I made the trip on a Labor Day weekend, I expected to run into a bunch of other hikers who’d finally received the opportunity to spend some extra time in southwestern Colorado. Except they never materialized. The town of Creede, last stop before the Rio Grande Reservoir and points deeper into the range, bustled with Texans getting into and out of their trucks, but evidently they never made it to the mountains. I also ran into a costumed bachelorette party which, curiously, included the bachelor too. Stranger things have happened. 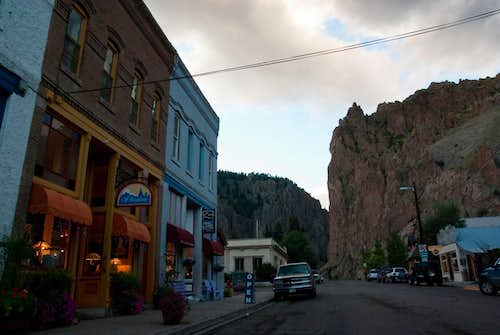 Creede
Creede’s a curious town, though. Its rise and fall follow the standard Colorado mining arc, but no ski area has resuscitated its fortunes, leaving me to wonder what exactly happens to a mountain town of 400 during the winter. So I asked the girl making a burrito at the cafe.

“No, I mean what do you folks do when the tourists aren’t around?”

“Oh, well, this is a good place to be if you like spending time with your friends and drinking beer.”

“Those are good things.”

But this was a trip report about the San Juans. 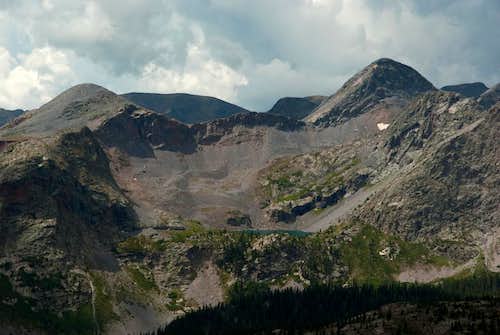 Peters Peak
I wandered in on my own on a Saturday morning with plans to loop up the Los Pinos Valley from the Rio Grande Reservoir, visit a formation called “The Window” then return via a connecting drainage descending from Ute Basin. You’d do well to make the same trip (though I should note that completing the loop requires hoofing it across a few miles of mountain road or bringing your mountain bike). The whole area lies within the Weminuche Wilderness, a protected tract of nearly 500,000 acres that covers Colorado’s most remote and jagged peaks: the Needles range, the Grenadiers, Chicago Basin. 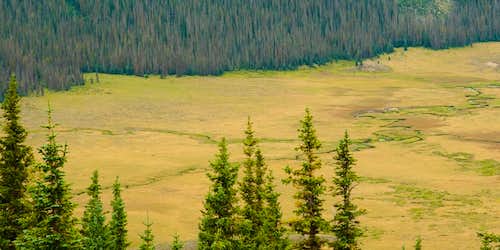 The initial hike in followed Los Pinos River, which got me to thinking that Pinos Altos would be a good name for a mountain cabin. Hiking alone, that sort of thing gets stuck in your head. Pinos Altos. A one-room cabin with a wood burning stove, maybe some pelts of varmints hanging from the rafters. The smell of wood smoke.  Pinos Altos would exist in a perpetual state of late autumn, where the season's first snow was just falling, the fire was always burning, and we were always just returning from a long day of something difficult and rewarding. You spend a few miles thinking about that when you hike alone.

Eventually the trail turned toward The Window itself, leaving Los Pinos River behind and below, its meadows receding around the bend. I’d met one man earlier, returning from a solo hike to the summit of the Rio Grande Pyramid. “Trail goes up that way for a couple miles,” he said, “Then you’ll hit a blow down, and if you start thinking, ‘This is steep,’ it is steep, and you should go back around. There’s a cairn.” And we continued.

The Window comes out of nowhere. You see the Pyramid, rising above most everything else, then its arm extending south. But there’s this chunk out of it, plain as day, and that’s the window. Evidently, the whole thing’s volcanic, a bunch of breccia that doesn’t get anyone except geologists excited, and as volcanic rock tends to do, it fell apart. I learned from a retiree the next morning—he ran into me as I was striking camp—that the Spanish used to use the Window as a guide post of sorts as they smuggled gold out of the San Juans. Moved tons and tons of it, evidently, though some partnership with the Utes. He’d read about it in a book titled “The Window” in Spanish, which he suggested I read if I could remember the word for window. Luckily, Google Translate can. 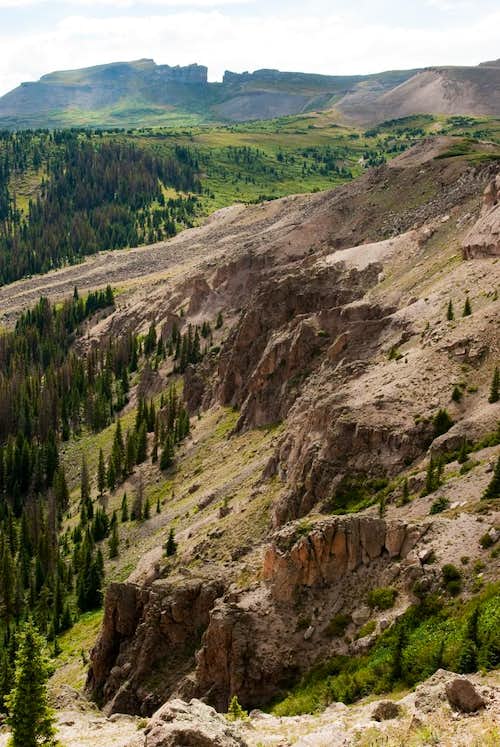 The Window
As you might imagine, the Window is suitably spectacular. The view is a postcard from Wyoming. With the addition of a glacier or two the Needles could pass for the Winds, and it all unfolds before you without any indication of a human presence. The whole of the San Juans surrounds the Window and from every angle the mountains stack up on one another until they disappear beyond the horizon.

Nowhere else in Colorado feels so high and so lonesome. Every valley ought to have a town, but look, and a braided river winds its way through a meadow, perhaps on its way to Los Pinos. If I were the Spanish, I’m not sure why I’d ever smuggle anything out of this place—better to sit there and admire it, alone preferably, but good company could work too.

Almost invariably, a twinge of sadness accompanies a departure from a high point like that. The trail descends, the views disappearing along the way. But this trail holds more in store, and as two hikers told me on Ute Pass, it would only get better. 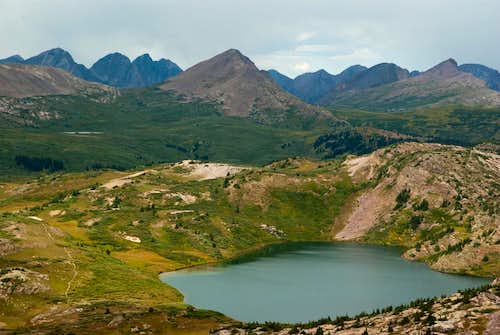 Another saddle and more views down a web of drainages. Where could they lead? Then along another ridge staring into the Needles. A thousand lakes, it seemed, or at least a few. These were the winds all over again. A trail, trees, lakes, the rolling expanse. Here was Colorado before the mining booms and busts, before Creede, before even the Spanish and the Utes and all that gold.

Past Ute Lake, then Twin Lakes, it had to end. The Continental Divide Trail—the unbroken ribbon from Mexico to Canada—continued north, but my route carried me back to the reservoir, and my waiting car. The hunters camped at Twin Lakes never called out a greeting, and no one else appeared along the trail to greet.

An evening in a meadow, then a frosty sunrise. The hike out through Aspens. A family of stoats and more thoughts about Pinos Altos.

I’m not sure where all the thoughts go when you hike alone, spending that time with yourself. To be in your head that long, it should drive a person crazy, but it never does. It can’t. Too many mountains wait out there.

...the San Juans is on the to do list! A trip into the Weminuche IS on the bucket list. Thanks for posting. Great stuff here! Mark...

The San Juans have 250 of the state's 584 ranked 13ers, and 250 of the 676 ranked 12ers, and are by far the most glorious part of the state. But they are pretty different from the Winds, at least for climbing peaks, IMHO. Both are beautiful and worth the time and effort to get in to.

I was a Wilderness Ranger in the Weminuche for 3 years, including a lot time to myself in the Los Pinos drainage. That whole river from Vallecito to it's headwaters is incredible, especially in the fall. Enjoyed reading your post, brought back lots of memories of remote, high peaks, lakes, and solitary contemplation. You need at least a full week to experience the vastness (for CO) and undisturbed beauty of the 'Nuche. Stay away from Chicago basin for a true San Juan experience. I miss those years of my life....but my back doesn't!