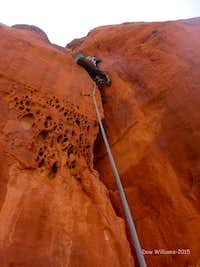 3rd Pitch
Once you get past the classic (read, gets traffic) spire/tower climbs in Sedona, the rock quality heads south in a hurry (soft and crunchy) and the north face of Firecat Spire is no exception to that rule. The direct start might be the dirtiest pitch I have led in Sedona and it is called out at 5.10- by the FAer’s (the first ascent of the tower using the original traverse in is labeled 5.9+). That being said, the location of Firecat high up a wash/canyon among other spires, the neat chimney and off-width climbing on pitches two and three and the ability to easily combine it with another tower of a similar grade (Teaser Spire) make this climb a worthwhile objective. The route was established by Geoff Parker in the 70’s and Kim Spence added the direct start in the 80’s. 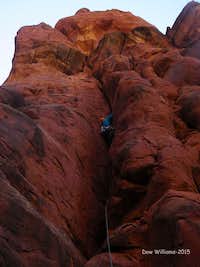 Direct Variation 1st Pitch
The traverse pitch of the first ascent is just a few meters and from the ground the direct start looks inviting. It turned out to be chossy as hell, but I still recommend it for a better overall line. I did not feel uneasy about my pro as much as I was eating sand. The pull over the limestone band roof was an awesome move (5.9+) that made the groveling past some bad blocks below worth it. The second pitch is more challenging than it looks.   It is a chimney that actually protects fairly well by Sedona standards.   It is a bit narrow and therefore a little more challenging than a straight up 5.8/9 chimney. The third pitch off-width is the crux by far.  A C4#6 protects well to a bolt and then a C4#5 protects the upper off-width after you switch cracks to the left.  The third pitch is a good quality Sedona wide crack pitch.  The last pitch to the summit involved some route finding on fragile rock. The fixed hardware on the summit could use retrofitting (2015) and makes for a full 200’ rap to the ground on the true north face. There is a mid-station single bolt (modern in 2015) that would allow you to descend via two raps with a single 70m. 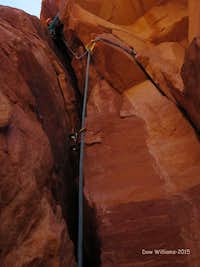 2nd Pitch
Park at the Marg’s Draw Trailhead in Sedona. If you are not local, this can be hard to find on your phone depending on what map service your phone is plugged in to (can be misleading). The biggest intersection in Sedona is 89A and 179. Head south on 179.  Take a right at the next roundabout. After a few 100 yards, take a left on Sombart Lane (Circle K). Park at the trail head on the left. Hike east across the road and continue to a T intersection in the trail. Turn right and turn left in about 100’ or so on more of a climbers trail. Continue on this trail across several slick rock areas. When you reach an obvious large slick rock area (an acre), continue to the southeast end of it and locate a trail that descends south towards a wash. Turn left in the wash and follow it as it trends north east. At a Y in the wash, take the left fork where several towers are now clearly visible to the north. Firecat is on the upper right side of this wash. Continue up the left side of the wash until you can make a bee line for the northwest corner of the tower. The direct start gets some sun. The traditional start is more on the true north face at the base of a 5.11 off width pitch/route (it traverses in from left to right). I advise the direct start even though it is dirty. If you are going to hike this far to do this tower, might as well get some more climbing in. It is less difficult than the off width pitch above even though rated higher by its FAer’s.

1st Pitch- 80’- 5.9+/This variable direct pitch is not a 5.10 Sedona lead from a technical perspective even though it might be published at that grade via some sources. However, the poor rock quality might make you think you are climbing 5.10! I have climbed most of the spires in the Sedona area and this pitch might be the absolute worst in terms of soft and chossy rock. But it is inviting to look at. Start up the obvious wide crack formed on the northwest face of Firecat. The deep gear is not bad and varies in size from fingers to hands. The rock on the outer edges sloughs off while you stem and chimney your way through it. The worst section is about three quarters of the way up this crack where you need to jam a bad flake to proceed. Above this poor section of rock is the limestone band which forms a fun roof pull (worth the struggle up the bad rock). A bomber C4#5 protects the huge jug haul up and over to a medium gear belay on the ledge below the chimney pitch.

2nd Pitch- 80’- 5.9/This pitch involved some thoughtful chimney climbing, but was not as run out as referenced in other sources. You get good gear in a small crack on the right before you commit to the chimney. The narrow chimney climbing is secure, but athletic. You really don’t need the C4#6 for this pitch as much as you do for the off-width pitch above which is the crux pitch of the climb. Pull out of the chimney to a single bolt/gear belay on a nice ledge on the true north face.

3rd Pitch- 80’- 5.9+/This is definitely the crux pitch of the route. Head of the left facing huecoed off-width corner. A C4#6 protects the climb until you can clip a bolt on the left wall. It is a bit overhanging and full on challenging at the grade. Once beyond the bolt, traverse left out of this crack to better rock. Climb the next off-width with a C4#5. There will be less features on this short and wide section and it too is a bit challenging for the grade. Easy climbing leads to the col between the two summit features. I combined these last two pitches but do not recommend it due to rope drag. Stop at the fixed station (2015) between the two summits.

4th Pitch- 80’- 5.8/There are several moves on this last pitch that are exposed to ledges on poor rock. From the belay, head straight up for a hand jam pocket that protects with a C4#2 on possibly the only decent rock on the summit block. Pull through this band and traverse a ledge right to a standing block. Stand on the far right end of the block and mantel up on loose and precarious rock to the next level. Continue up the final steep and short headwall, traversing left to a final summit mantel move to a poor (2015) fixed rap station on the summit.

You can take a full 200’ rap from the summit to the base of the north face (the FA traverse start). There is another fixed rap at the summit col, but there is no need to stop there with double 60m ropes. There is a single (good shape-2015) bolt rap hanger at the top of the 2nd pitch that would allow you to rap the route with a single 70m rope.

Double ropes. Helmet for the choss particularly for the direct start. Single from C4#.4 to #6. You could justify a few more medium pieces for the direct start, but I would be comfortable leading it again with a single rack. You are really only relying on a few solid pieces to protect on this choss pitch anyway. Pitches 2 and 3 are quite wide and #4 does not have much pro opportunity. I did not place any wires. Bring more 60cm runners than draws as the route is wandering. The route is mostly north facing, so dress accordingly.