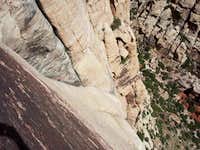 Hot Flash, III, 5.8
The obscure and less popular First Creek Slabs in First Creek Canyon offers a hidden gem at Red Rock, Celtic Cracks (5.10d). It's roof pitch, named the Shamrock Roof, when linked with the corner pitch below it, is one of the finer moderate (5.10) pitches of trad climbing in the park. The route itself has zero fixed gear and offers a full day of climbing with some total 2250’+/- of 5th class elevation gain involving the climb itself (1250’) along with a plethora of lower route options (1000’). They obviously named Celtic Cracks after the prevalent green moss growing on this mostly shaded northeast face of Indecision Peak. A much more popular route amongst the local sport crowd is Rising Moons (5.5). This is a simple three pitch route that allows new trad climbers the opportunity to hone their skills. Another route that has gained some popularity is Hot Flash (5.9), another of many Urioste routes, this one established in 2006. After those three, the routes at First Creek Slabs become much less traveled.

Park at the official First Creek pull-out on Highway 159. Hike along the trail above the left side of the wash as you enter the canyon passing under Lotta Balls Wall and the Romper Room area. The first route to mark the First Creek Slabs area is Rising Moons. Hike up the left side of the canyon floor to the base of a white sandstone tower with a triangular block resting below it. 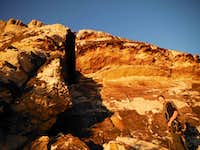 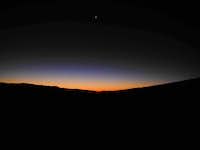 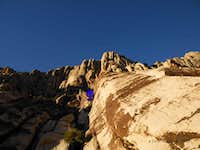 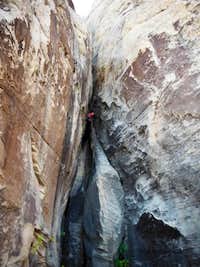 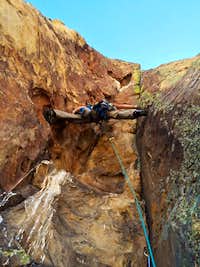 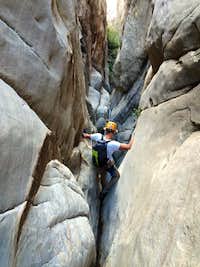 Lower Tier
Rising Moons is a short three pitch route covering approximately 400’ that it took me less than 30 minutes total to ascend and descend excluding the one hour approach. The first pitch runs up a darkly varnished chimney to a treed ledge. The second pitch is made up of solid rock and runs to the top of the leaning tower, via mostly well varnished face climbing out right of the chimney which leads to a fixed belay at top. The last pitch is above the tower via a wide crack in whitish sandstone. If free soloing, you will feel much more exposed on this final pitch. At the top is a singular bolt (2012) and tree fixed for rappel. I took two single rope raps which got me down most of the second pitch and then down climbed the rest of the route. Dow

Another trad special at Red Rocks, Hot Flash is a fairly new route in First Creek Canyon put in by Larry DeAngelo along with the Uriostes and Bill Hotz in 2006. It was Crazy Larry’s positive remarks about Hot Flash at Mountain Project that caught my attention. After climbing it however, I was not that impressed with the line. I did need a long mellow day with a new partner and Hot Flash did fit the bill for that, offering little in the way of crux climbing by Red Rocks 5.8 standards. Most all the belays were quite comfortable and the route easy to navigate. Dow

Only two pitches go at 5.10 and I linked those. Although the roof has a published grade of 5.10d, most, including myself, would say that section of the climb is closer to 5.10-. After those two pitches, there is not a pitch harder than 5.9 and the upper half of the route follows the same wide crack to the top. My preference for the approach to the route is to climb (solo if both parties are competent enough) Rising Moons which I on-sighted solo when I first climbed it. There is not a move harder than 5.5 on Rising Moons. Then make a quick run (simul or solo) up the wide descent gully most use for descent after they have climbed the lower slab routes, most of which are all a 1000’ in height. This gully leads directly to the first pitch of Celtic Cracks on the ledge separating the lower and upper walls of First Creek Slabs. Dow

The first pitch is difficult to find as it is not well described in Handren’s guide. I don’t know why, because it is easy to describe. Once you get to the top of the gully descent (an oft descended route for Hot Flash, etc), simply turn right and hike up and past a huge arête on your left. The route starts just right of the arête in a small crack system. There is no “striking hand and finger crack” to the left as Handren’s guide suggests or we simply have a different definition of striking. That probably threw us off more than anything else. The arête is the feature to focus on.  It is so large that it shades the first several pitches for most of the day. I can’t say much of this first tier of climbing on the route was memorable and every hold had to be tested. We did not bring nor needed much large gear to protect any of the off-width mentioned in this section. Anything wide offered easier climbing. The only decent crack climbing showed up on the 3rd pitch, but was short lived. Pitch 5 is the crux pitch and starts the final head-wall. It was a horrible pitch. The 5.11 section on this pitch started off the deck and when the angle eased to 5.9-5.10 with some hands, the moss thickened and you were basically jamming moss at times. The whitish sandstone in this section was so rotten from the moss and lichen that very little if any of my pro felt like it could arrest a fall. I missed the 5.6 traverse right and kept leading this pitch to the end of my 70m rope to inside a chimney. The last two pitches that I FAed (3 without simul climbing) actually offered the best climbing of the day. The first of these still dealt with fairly weak rock but offered good crack climbing to an old bird nesting area in a chamber below a uniquely featured vertical wall with a protection crack out right. The last pitch pulled an improbable roof via 5.10 and then up a corner to a ledge where you could divide up these last couple pitches. I kept going to reach the top but that required my partner to simul-climb, but after a short bit of 5.9 off-width the terrain eased way off anyway (by the time he was simul climbing).  Dow