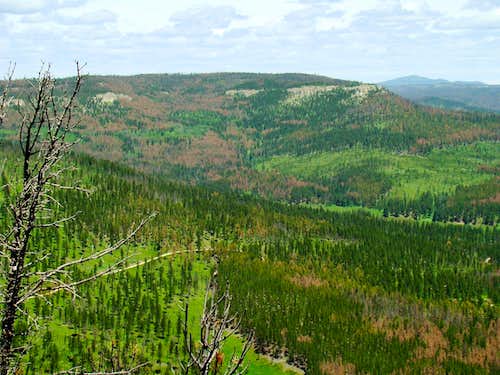 Flag Mountain summit view of White Tail Peak, with Terry Peak in the distance (to the right).

Flag Mountain is a popular summit with Black Hills hikers. Many hikers appreciate the clear route up, great views and the historic old fire tower ruins at the summit. The close proximity to recreation and camping at nearby Deerfield Reservoir, plus other nearby Black Hills summits and trails, are added interests. According to Lists of John, Flag Mountain has 207 feet of prominence, making it an unranked summit. On the list of all summits in the Black Hills, ranked and unranked combined, Flag Mountain is #14. Hikers using the normal route up the peak will see at least 350 feet altitude gain from the trailhead. Visitors to the summit will normally be able to see Harney Peak and Sylvan Peak to the southeast, Green Mountain, Copper Mountain, and Nipple Butte to the south, White Tail Peak and Terry Peak to the north, and Custer Peak to the northeast. The peak also offers a commanding view of Reynolds Prairie to the east. There are limited views of Deerfield Reservoir to the south. 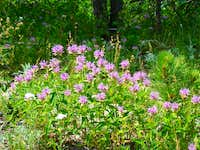 Flag Mountain is located about 40 miles west of Rapid City, in the Limestone Plateau region of the Black Hills. The peak is heavily forested, mostly with Ponderosa pine, but also with some aspen. Flag Mountain has suffered from some pine beetle infestation in recent years. The Mystic Ranger District (605) 343-1567 of the National Forest Service manages this area of the Black Hills. Wildlife is in abundance in this area of the Black Hills, and it is common to see deer, elk, pronghorns, marmots, porcupines, raccoons, and eagles. There are also occasional sightings of foxes, coyotes and mountain lions. 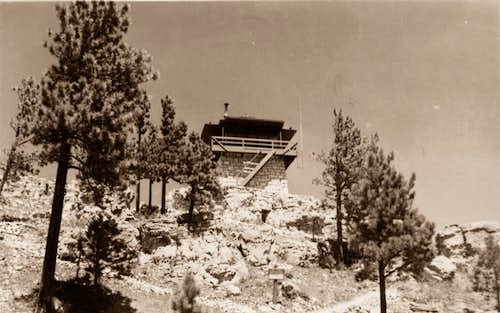 In 1941, the CCC built a stone & wood fire tower at the summit of Flag Mountain, as part of a large network of fire lookouts throughout the Black Hills. The lower part of the old fire tower, which is all that is left, was built of stone quarried on the mountain. The upper portion of the tower was built of wood, and was similar in appearance to the stone & wood fire towers that still stand on Custer Peak and at Cement Ridge, which is just over the border in the Wyoming portion of the Black Hills. 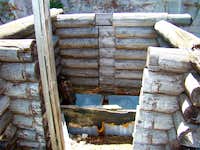 The old privy on Flag Mountain

The old privy, built of logs, still stands on the rocky base of the lower north portion of the summit block. The roof is gone, probably blown off by the fierce winds that buffet these peaks sometimes. The fire tower was eventually removed from service and now is part of a group of over 20 former fire lookouts in the Black Hills. 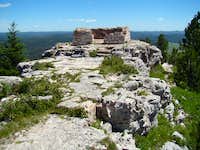 Fire tower ruins at the summit 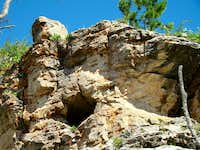 Most people access Flag Mountain from Deerfield, by way of Hill City. There are certainly many other ways to get there, but we will cover the normal route. From Hill City, go west on Deerfield Road for about 18 miles. This road was paved in the summer of 2014, so it is easy driving as far as the lake. When you come to S. Rochford Road, turn right and go 1.6 miles. At Flag Mountain Road (Road 189) turn left and go 1.5 miles to Flag Mountain Lookout Road (Road 416). Here you will be at the road/trail to the summit. 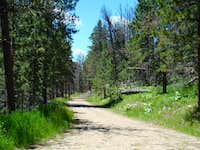 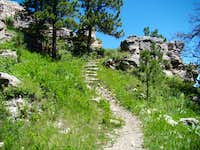 Stone stairway to the summit

The road/trail to the summit of Flag Mountain is a little less than 1 mile long. The grade to the summit is fairly steady. Though Flag Mountain Lookout Road is kind of rough in a few places, the even grade and rocky surface makes it pretty easy hiking. 4-wheelers are sometimes seen on this road. There is a substantial marmot population in this area, so don’t be surprised if you have some curious onlookers for your hike. 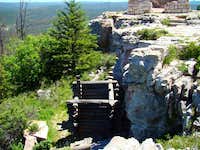 Flag Mountain is on Black Hills National Forest land, so no permits are needed. Because of numerous forest fires in recent years, please make sure you aware of any posted campfire restrictions and danger alerts. You may also be interested to learn of the latest forest service camping regulations: Black Hills National Forest Camping Regulations All the public land in the area is open to hunting in season. If you decide to hike there during one of those seasons, please be sure to wear a generous amount of orange.

The view shows Copper Mountain left and Green Mountain right, with part of Deerfield Lake below.

This summit may be accessed year around. Snowfall in this region can be heavy at times, and the road from Deerfield Lake is not always plowed immediately, so please check before attempting travel into this region. Deerfield Lake – Flag Mountain Weather Forecast For more information on issues with the South Dakota Hunting Seasons, check this link out: South Dakota Hunting Season Dates 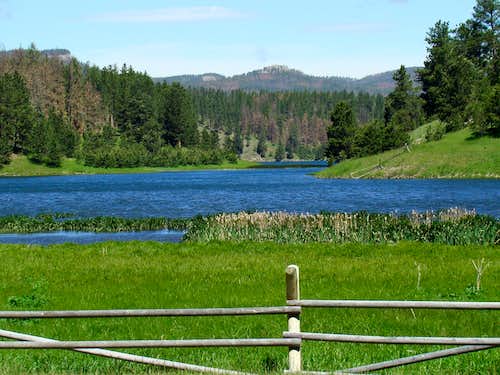 Aside from back country camping on national forest lands, there are campgrounds and lodging at nearby Deerfield Reservoir or in the Hill City area: 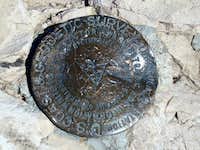 Flag Mountain is in the Deerfield Quad. National Geographic’s Black Hills North map is an excellent resource for this area. The National Forest Service offers free Motor Vehicle Use Maps for the Black Hills, which will help with your explorations.