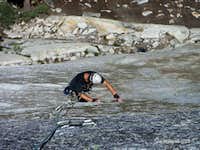 1st Pitch
Flash of the Blade is a relatively new route at Tuolumne Meadows located on an obscure wall named Razor Back. It is mostly a bolted route with a few options for gear on its last pitch. You would have had to complete a ton of classic routes at Tuolumne to be searching out this wall and these routes at Tuolumne. There is nothing overly majestic about this area or its climbs. However, when you combine Flash of the Blade with Slasher, it does makes for a worthwhile partial day objective if you enjoy clipping bolts. I thought the route was spot on for the grade (mostly 5.9+, but sustained climbing in sections) and the “R” sections are not at the grade.  In fact I have a hard time with the “R” rating in general. There are many climbing locales where this route would not be considered run out. 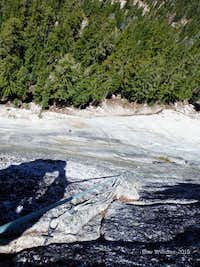 2nd-3rd Pitches
I am not a sport climber, but appreciated the thought the FAer’s put in to establish this line. The upper half of the first pitch is where the steep fun begins. The belays are comfortable and I actually combined the 2nd-3rd pitches to the top. Three single rope raps get you quickly back down to the ground. Slasher is a must climb as well if you are here and is the next bolted line to the right, single rope rap.

There is some weird approach beta on Mountain Project (2015) that references approach from atop of the Whaleback, etc. In reality the approach is very simple. Either park at the main trail head for Pothole Dome (pullout on right if heading west) or park off the road onto a single car pullout on the left a hundred yards or so west of the Pothole Dome parking.   In any regard, locate that single car pullout a 100 yards or more west of the Pothole Dome parking area. From there, start hiking southwest towards Fairview Dome. Keep heading up hill to the wall above (Marmot Dome) and once you reach it, start circumventing it’s base to the west like you are heading for Fairview. The Razor Back is the wall/ridge line that connects Marmot and Fairview Domes. There are quite a few bolted routes on Razor Back. Slasher is by far the easiest to identify as it is a tightly bolted single pitch.

1st Pitch- 120’- 5.10a/ The start is on the left side of the Razor Back wall. It is easier to locate Slasher first as it is a tightly bolted single pitch just to the right. Begin under some run out 5.7 terrain to the first bolt at about 25’. There are 7 bolts over 120’ on this first pitch. Continue straight up following the bolts. Pull an insignificant roof and traverse right a bit and up another session of bolts (the crux of the first pitch). Fixed belay on a comfortable ledge at 120’.

2nd/3rd Pitches- 200’- 5.10a/ My 2nd was not comfortable continuing past the first pitch therefore I combined these last two pitches. Unless you were in a hurry, there would be no reason to do that, but the rope drag was not severe either. Pull the roof up and right on fun and positive knobs to atop a flake which takes a variety of gear, I placed a C4#1 in it. Continue up on similar sustained ground that you climbed on the first pitch and follow the bolts to yet another comfortable fixed belay. Head up and right on more 5.10a sustained face climbing to a ledge. Move right and climb a ramp that takes a C4#.4. Traverse slightly back left and clip a bolt (I almost missed it) before making a ledge via an exposed technical mantel. Clip another bolt as you finish the climb to the top fixed anchor.

Three single rope raps gets you to the ground (you can do it with a 60m, just watch the ends of your rope so you don’t fall backward at then end)

A single 60m rope. A C4#1 and #.4. A dozen draws with a few extra if you plan to combine any of the pitches as I did. Half should be extendable as the route is not that straight. This wall gets plenty of sun at the end of July, late morning-early afternoon, despite being listed as a NW facing route.