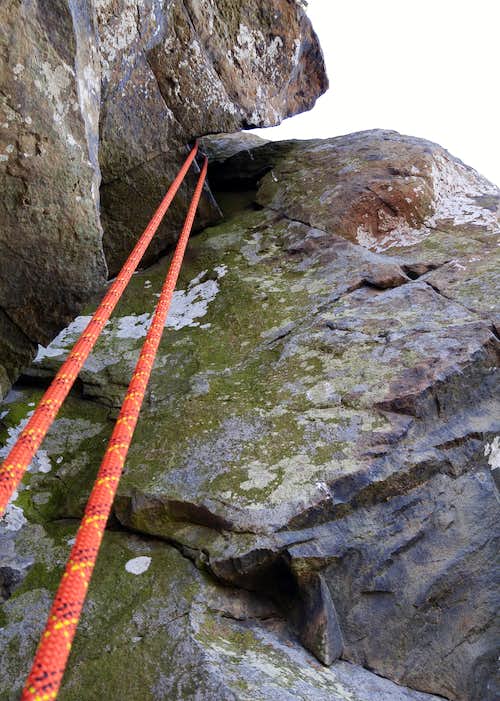 Sucking Crack (5.8)-- Crux
Named for a rock feature resembling a flatiron, this is the third climbing spot at Little Stony Man as one heads north-south, and it has two established trad routes, both moderates. One of those routes has two variations and the other has one, bringing the number of possible lines to six.
At up to 100', Little Stony Man offers the longest single-pitch routes in Shenandoah National Park and perhaps in all of Virginia.
The best resource for climbing here is this online PATC guide, but this page should cover you nonetheless.
Toproping here is a hassle because unless you know the area well, most routes are difficult to locate from the top, necessitating a lot of yelling back and forth with one's partner or extra trips up and down if one is solo; and because you will have to build a gear anchor, as the only trees are on the other side of the clifftop trail and you are not allowed to have ropes crossing the trail (nor should you want to).

The Little Stony Man parking area is in the park’s Central District at MP 39 on Skyline Drive. If entering the park at the Front Royal or Thornton Gap entrance, drive south. If entering at Rockfish Gap or Swift Run Gap, drive north. Note that there is an entrance fee for Skyline Drive. In 2015, it was either $15 or $20.

Note-- Some boulders and outcrops near the northern end offer interesting bouldering and scrambling, and I have, in fact, done some bouldering there, but current management plans have made for the closure of this area to human activity.
One can also hike to the top of the cliffs instead and then follow The Chute down to the base, but it is much faster and easier to use the Passamaquoddy Trail. The Chute begins south of the open clifftop area.

The Flatiron area is an "amphitheater" between two buttresses; there is an obvious route up top. Near the bottom is a pillar, and above-right of the pillar is a triangular section of rock that is the spot's namesake.
The two established trad routes here:

There are plans to close a section 35 meters north of the Chute and all of the cliffs south of the Chute to human activity. Also, there are plans to use low-impact barriers to close off a boulder area at the north end where the Passamaquoddy Trail bends to approach the base of the cliffs. I do not know when these closures will go into effect; they did not seem to be in effect as of November 2010, the last time I was out here.

To reduce poaching, Skyline Drive is subject to closures during hunting season. The information below, copied and pasted from the park site, illustrates the 2006 restrictions—

All year. The cliffs face west and can make for decent climbing in winter when it isn't windy (which it usually is here). In the summer, finish climbing by solar noon or prepare to bake.

The nearest campground is Big Meadows, about 14 miles south. The campground is usually open from early March through Thanksgiving weekend. Reservations are strongly advised. The lodges are seasonally open, with Skyland opening earlier than Big Meadows. For more comfort, consider staying at Skyland Lodge, about three miles south, or at Big Meadows lodge. See the External Links section for links to pertinent information.