Freeriding is a type of off-piste skiing that features skiing that is accessible from the resort within reasonable hiking time. Freeriding (faces and lines) might feature jumps, cliffs and other terrain features that are all natural. Keep in mind that freeriding envolves off-piste skiing and as such all the normal dangers included in this type of skiing so be sure to know you avalanches, always ski with a partner and know your weather.

These faces and routes are (can be) directly hiked from the refuge or the road. They have no relation to the ski resort and there is no need for a ski pass to access them. 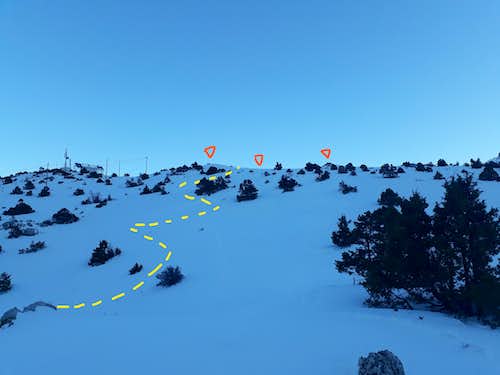 The Observatory Face
The Observatory face is a South face just under the peak of Ostrakina (1981m). This means that, the snow is hard and icy until around 12 am when the sun finally warms it up. There is great snow coverage on the entire face and just some small trees which you can ski around (or over) so it is pretty good.
From the refuge at 1588m you need approx. 5 minutes to reach the top (summit or ridge) by hiking the face with ski boots. You can ski off the North aspect, as well as the North West aspect (after the observatory [pic left]) but the South aspect is the best due to the ability to easily lap it and no steep features (which is good due to the length of the slope).
Beta: On January 4th 2018, at 17:00 until 18:00 i got 4 runs in two from the ridge between the summits (orange middle) and one from each summit (highest summit right). The hike goes up from the yellow trail. At that time the temperature was at around 1C to 0C, the snow firm and icy with N-NW winds with fast and cold gusts.
On January 5th 2018, at 8:00 i got one run from the true summit (Orange right) the snow was icier with no winds and the temperature at around -2C.
The avalanche danger was non existent but be aware of possible slides that might occur after fresh snow. 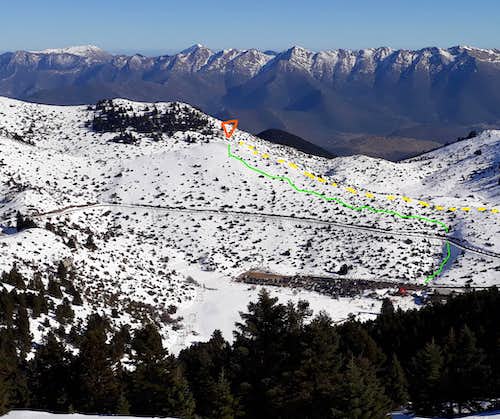 The peak of Mavri Korfi is connected to the Observatory by a ridge, this ridge features a high-point at 1686m of elevation. This peak is just above the ski resort and is easily (not so much) hike-able from the refuge. My hike took me 17 minutes from the Observatory (1624m) through the ridge. You can ski the West aspect (which is preferable) or drop in the East aspect and ski the back of the bowl which is way steeper. There are many possible ski routes from the top.

Beta: I skied the face on the morning of January 5th 2018, with a goal to ski down to the resort to make it at first chair (9am), the face was cold and in shade through the dissent (see green line), the entire traverse was on firm icy snow with almost no complete turns just traverse turns. The temperature was at around 2C with no wind and no avalanche danger whatsoever. Notice that there is a road gap, to cross the road i stopped at the edge and side stepped the edge (with the skis thrown down on the snowbank) and the after crossing the road (why did the skier cross the road?) skied again down the colouir.

The ski resort provides multiple great faces that can be accessed really easily from the top of the lift (generally). These faces provide great turns with different types of terrain such as colouirs, bowls, boulevards and steep jump lines. All this providing great views of the area. 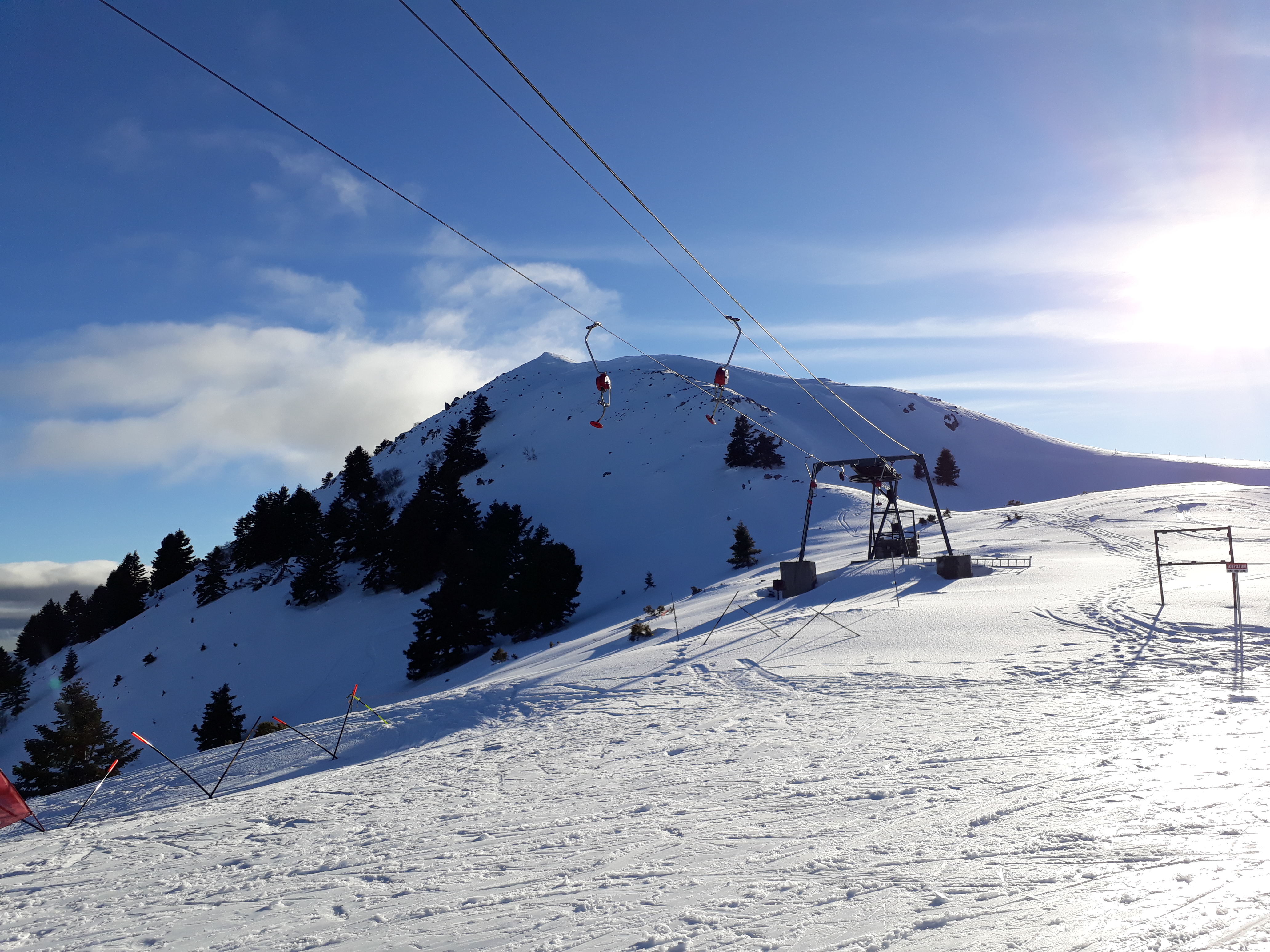 Sfentami colouir from the Lift top
The Sfentami (1870m) is the second highest peak of the range and its North aspect features a large and wide colouir that is very fun to ski. It is easy to spot it on the picture (left, sorry i couldn't get a better pic) and is easily accessed from the lift. With ski boots on it takes me approx. 11 to 12 minutes to reach the summit on icy - firm snow. From the entrance of the colouir you can ski in and it is recommended that you exit the colouir to skiers right as there is a large hole (as visible in the pic) which you don't want to end up in. The conditions on the colouir are very peculiar, during cold and firm snow the snow is almost clear blue ice and really hard to ski; the snow does not get softer until late in the afternoon say 3pm. This line/face is very prove to avalanches due to its elevation and element exposure as well as there are multiple cornices which you need to be aware of. 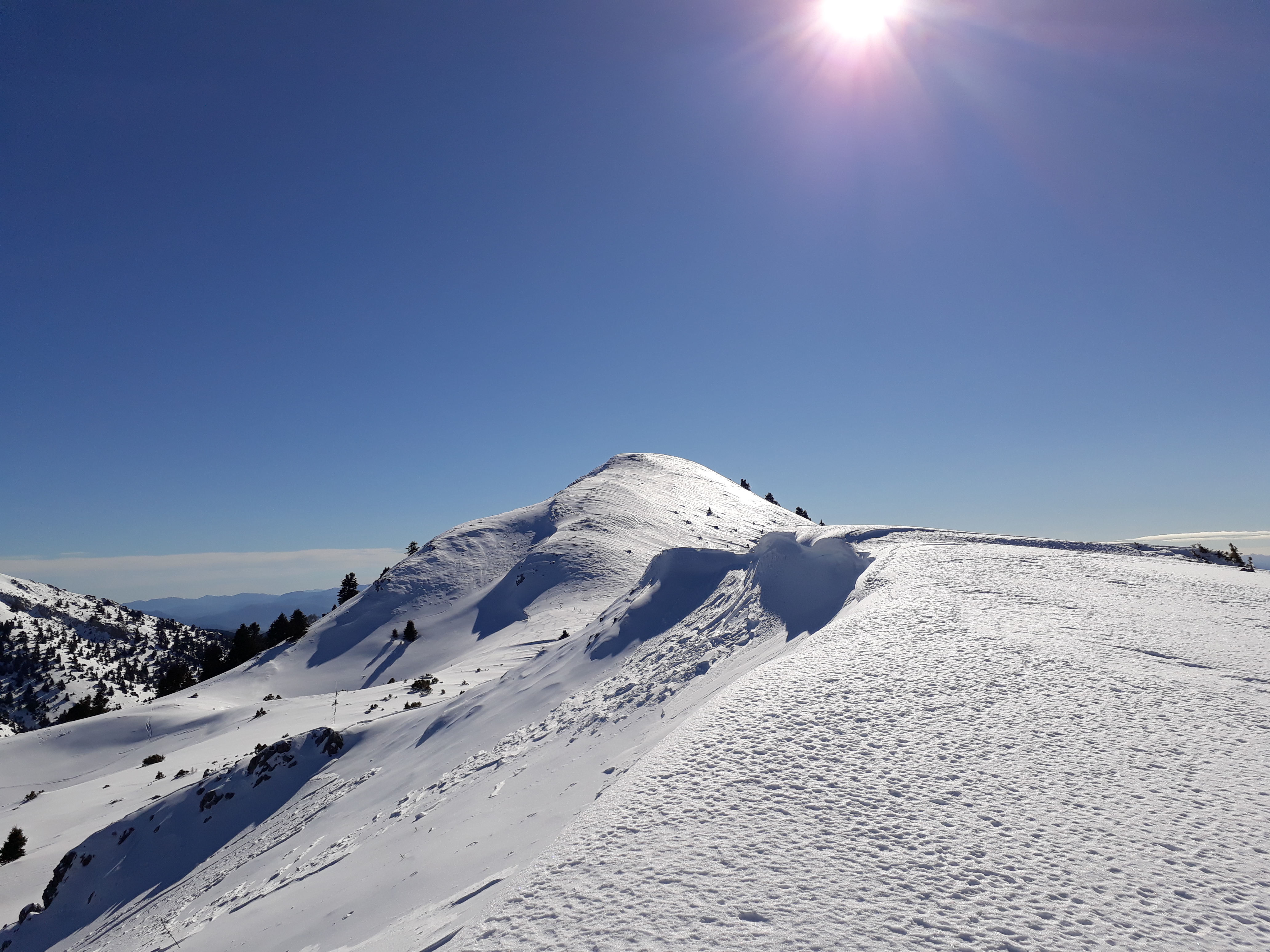 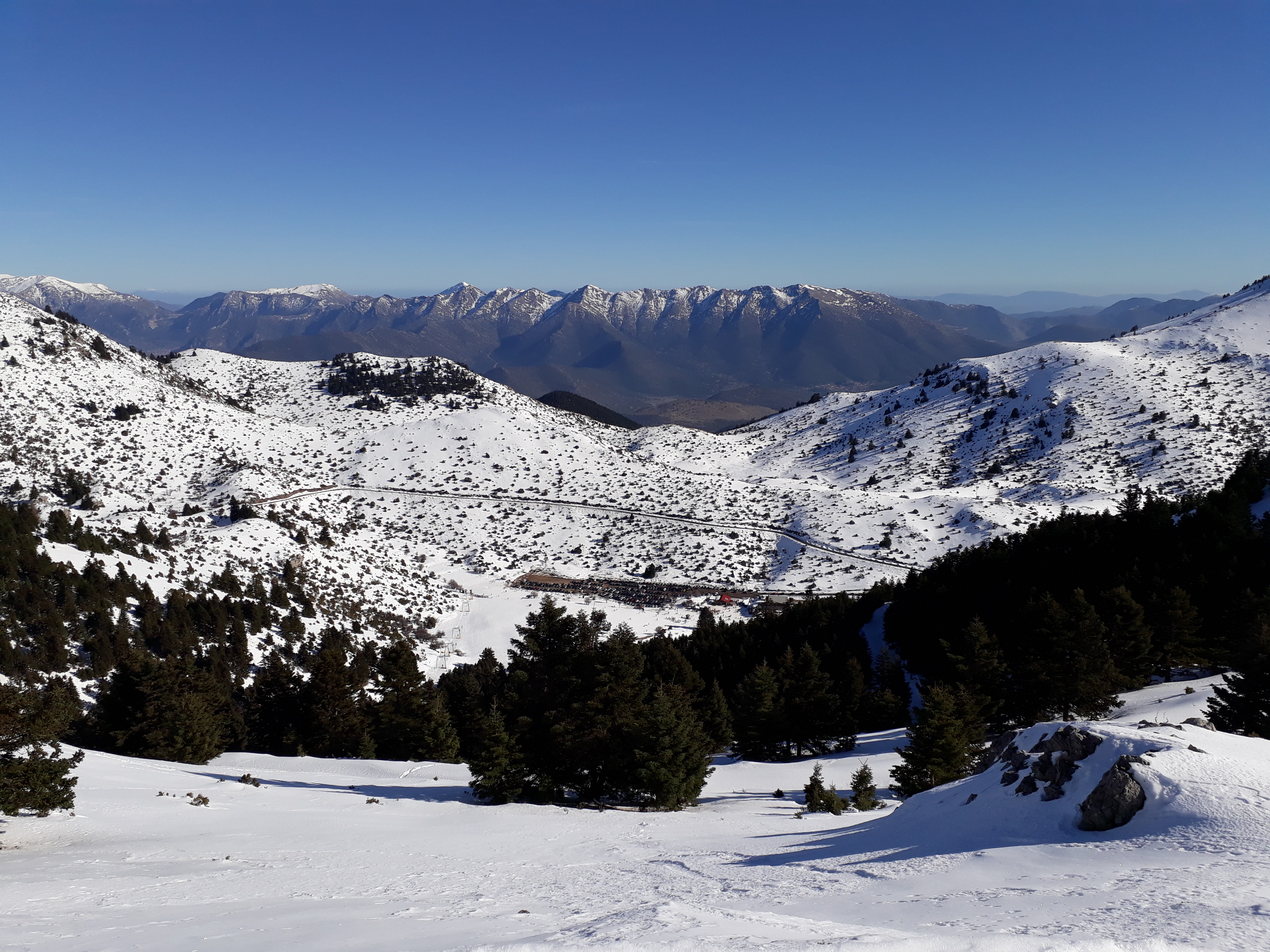 The bowl 33 from the summit
Ridge 33 is a very interesting and good point to ski from. I don't have any good pics of the face (sadly) but i assure you it is a damn good peak to ski from. It features three faces which you can ski off, East, North, South. These faces each feature different terrain options. The East face (pictured left) is a steep powdery bowl that can lead you to either a snow-covered road about 50m lower (good if you want to get some laps) or continue to the resort trails. The North Face has a steep bowl type entry that can lead into a wider bowl which later colouirs around and exists on one of the trails, or traverse onto the top of the bowl to drop in from there. The South Face is a more mellow face that features a large rock formation that can be dropped, i tried to but due to conditions it was way too sharky to safely get into line, this face would be great with powder and you can ski left after the features to make it to the forest road such that you can lap the face. The hike takes around 8 minutes with a steep entry. In the pic below you can see the South Face with orange and the East Face with green. 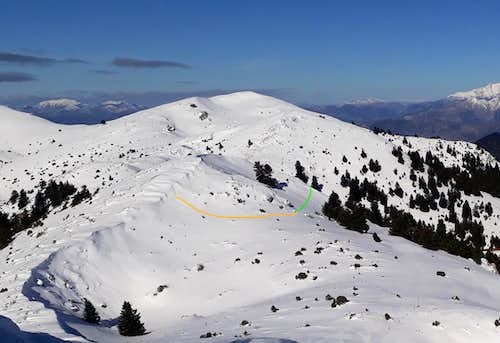 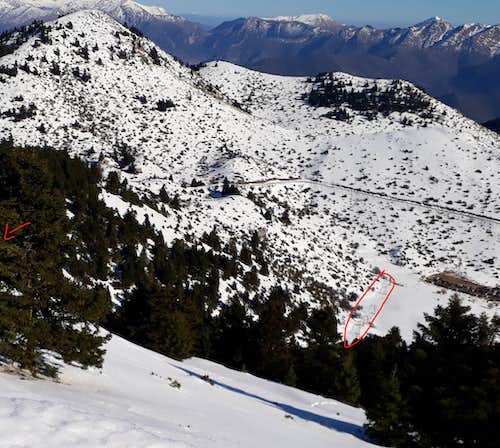 The face of Arktouross with the lift in red
The Arktouros face is the face directly right of the Arktouros lift of the resort. The face features low trees and open steep tree skiing above the lifts. The face can be acssesed after a 10 minute hike from the Kaliva or the Periferiaki Turn. After there, you will reach the open bowl to your right and you will be able to ski down to the lifts. Watch out of the ravine which is steep and dense with trees, also watch out the exit where you will need to cross the lift track so don't hit anyone.
The face is a bit exposed and the snow not so good but the avalanche conditions are almost always prime, although there might be a chance of an avy, it will be rare. 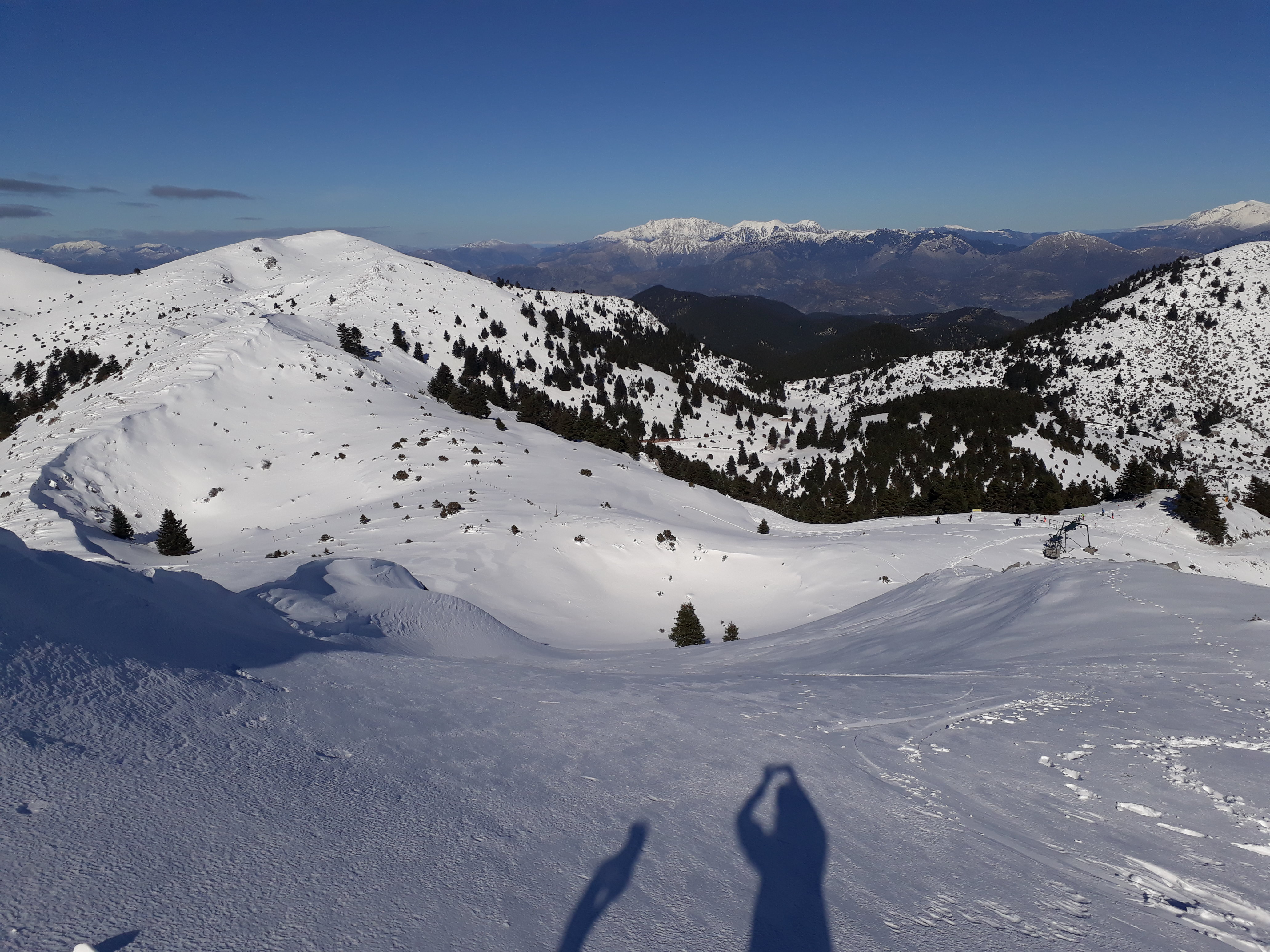 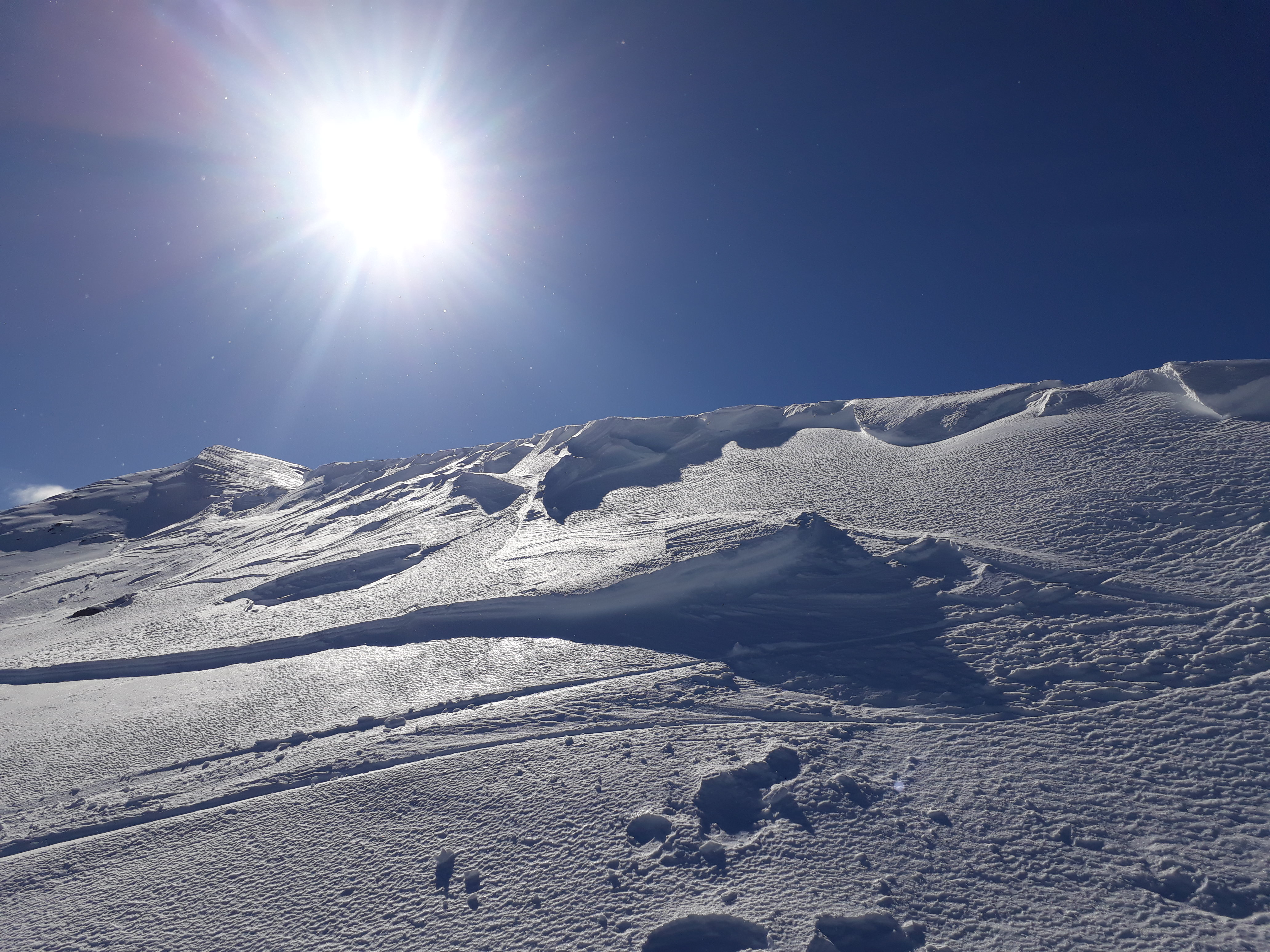 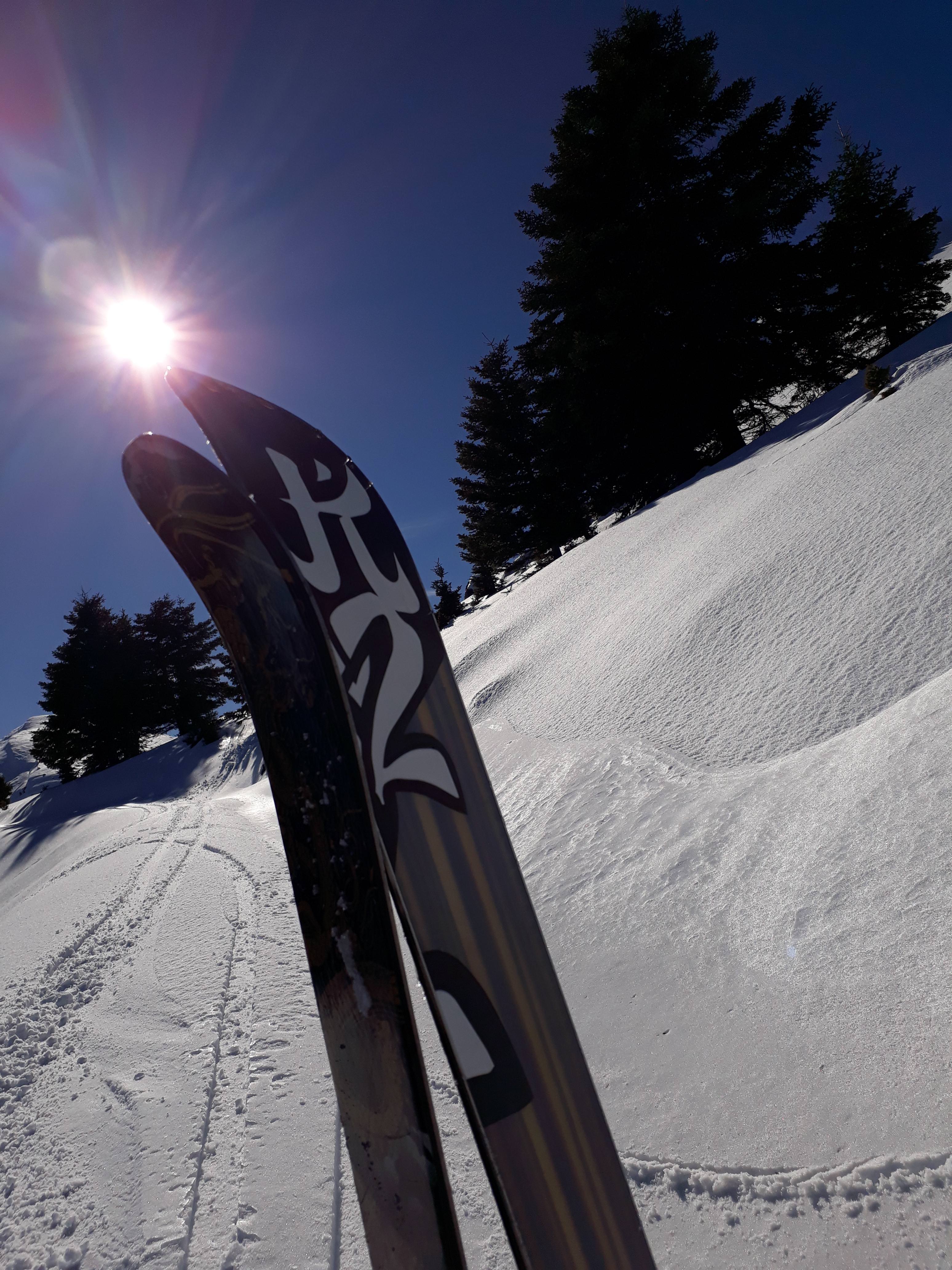 Perfect Backcountry day on the forst road under Ridge 33 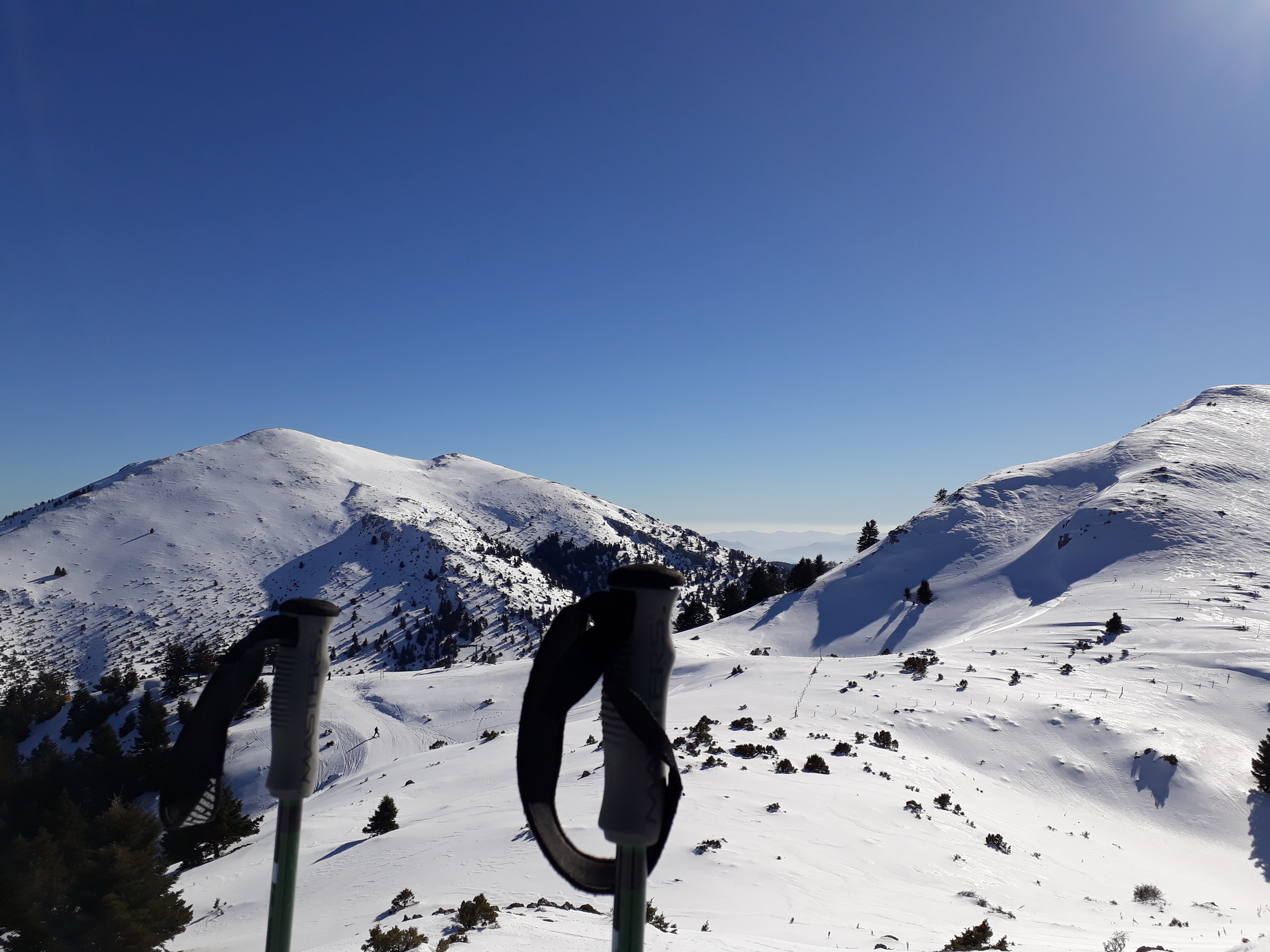