French Cabin Mountain contains a cluster of peaks in the Easton sub-range just east of Snoqualmie Pass. The Easton group of peaks includes Baldy, Domerie, Little Kachess, and Thomas, and French Cabin Mountain. The three main peaks of the complex are the West Peak (highest), North Peak, and the South Peak. There are two other peaks within the "French Cabin group": French Chin and French Tongue. These two peaks straddle the eastern and western sides of the pass that gives you access to the Silver Creek Basin. Four of the French Cabin group are technically easy scrambles, with the exception of French Tongue, which is loose Class 3 with exposure by its easiest route. The French Cabin Mountain Peaks provide a great recreational area of fun scrambles in a scenic area close to the Seattle metropolitan area. This area has quick access from the populated areas of Puget Sound, but still give the impression of an outing in the Wilderness. For a quick jaunt into the mountains and an easy, scenic summit that doesn't see much traffic, French Cabin Mountain is a great choice. 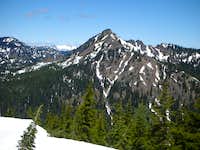 Drive I-90 East from Seattle, getting off at Exit 80. Head through the towns of Roslyn and Ronald, driving 12 miles past downtown Roslyn. Just past the end of Cle Elum Lake, turn left on French Cabin Creek Road #4308 and drive about 7 miles to the trailhead for Trail #1305. The roads here are overgrown with brush and rough. Go as far as you feel comfortable, but high-clearance vehicles can be of use here. Trailhead elevation: 3700 feet. From the parking area, you will have a great view of the French Cabin Mountain group, and in particular, the precipitous North Face of the West Peak.

Trail #1305 starts in clearcut and heads up the hillside for the pass between the West Peak and another of the subpeaks of the French Cabin Mountain group. At 1.5 miles, the trail will merge with the Kachess Ridge Trail. Head left (south) and arrive at the headwaters of Silver Creek. Hike down the valley, with French Cabin Peak on your left (west). Go about 1 mile until the topography allows easy access to gain the ridge, then head due east, gain the South Ridge of the West Peak, and follow easy cross-country terrain to the summit. Trip distance: About 6 miles round-trip. Elevation gain: About 2800 feet with ups and downs. 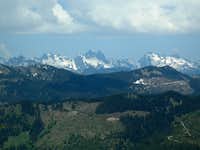 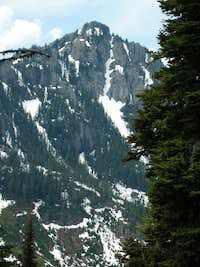 West Peak from the ridge between the North and South Peaks 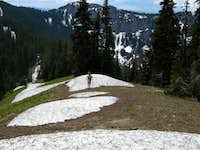 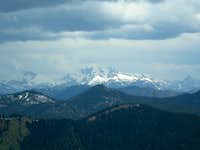 Mount Daniel
The North and South Peaks are rounded hills compared to the West Peak, but do provide great views of the North Face of the West Peak and the Stuart Range to the East.

Follow the directions to the French Cabin Creek Road #4308 as described above. Follow the road about 3 miles, looking for Road #115 on the left. Take this short road, and if in a high-clearance vehicle, cross French Cabin Creek over a concrete-lined creek. If not in a high-clearance vehicle, don't chance it. Park across the river in a large open area, finding a barricaded road at the south end of the parking area. Park here.

Climb the abandoned road about 2 miles until the road is barricaded by boulders. On the left, you will see the start of the Domerie Peak Trail #1308. Hike this very steep trail about 2 miles, going up and down high bumps on the trail. About 1 mile past point 5023, you will be directly under the North Peak. Leave the trail and head straight up to the ridge and the summit. 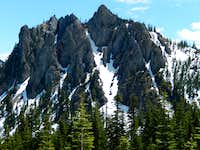 French Chin from near the French Cabin Creek Trailhead 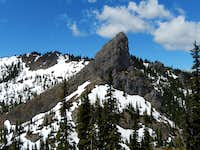 French Tongue from French Chin
French Chin is the peak to the east of Silver Creek Pass. It looks mighty impressive from the French Cabin Creek trailhead, but is an easy scramble. Gain the pass, and climb due east up the ridge. Mainly Class 2, with some minor Class 3 moves near the top (no exposure).

North and South Peaks Route-TOPO! Software Image.
There is practically no camping possibilities for the North and South Peaks except the parking area. For the West Peak, the first good camping opportunity is over the the pass at the headwaters of Silver Creek. This is a very broad, open basin, with good flowing water well into July. Good campgrounds abound here. There is evidence of horse traffic here as well, and some of the camps are large enough to accommodate pack animals. Remember, this is unprotected area.
This is an unprotected area near the Alpine Lakes Wilderness. A NW Trailhead Pass (Cost: $30/year) is not required to park since none of the trailheads have any improvements such as toilets. 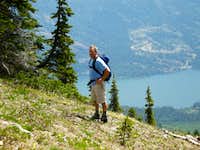 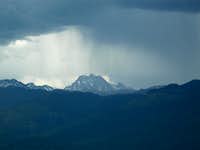 Oh, you are quite right. Don't know how that happened. Oh well, it's been corrected. Thanks.

Sometimes when editing a page, there is a scrolling feature which can throw the map off. It's happened to me a number of times.