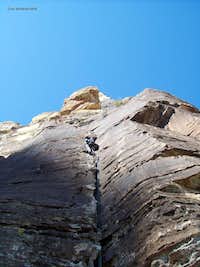 Frigid Air Buttress, 5.9+
Frigid Air Buttress is well known by the popular Red Rocks route of the same name, however the buttress itself is actually a 900’ high broad northeast facing prow on the lower flank of Bridge Mountain that contains at least eight published routes. 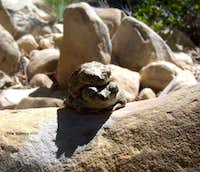 Icebox Canyon and Frigid Air Buttress are aptly named. Where the hemmed in Icebox Canyon provides shelter from the wind, it also traps the desert nights cold air. In the winter when sunlight hours are less and the angle of the sun is cut off completely from north and some east facing routes, these can be chilly climbs. Therefore, I advise Frigid Air Buttress as a spring or summer climbing destination. Along with Necromancer Wall directly to the east, this part of Icebox Canyon offers quite a bit of good moderate climbing options on decent rock.

Park at the Icebox Canyon trailhead. Proceed west towards the canyon on the well-marked trail. Wait until you are directly across from the buttress and then descend into the wash and find a faint trail on the other side that meanders up the hill to the base of Frigid Air. The Frigid Air Buttress route is directly up and right and Burlesque is way back into the dark amphitheater on the left.

There are several shorter routes along with Bridge Mountain’s northeast arête route further in canyon around the right side of Frigid Air Buttress and even further in canyon yet is the impressive Refrigerator Wall on the left.


Competent parties can solo the first brush laden pitch of Burlesque to the base of an easy left facing corner which is right below a major corner system (slung tree). Rope up and climb two stacked corners to the base of the tall/main corner above and move the belay to the left below the large off-width/chimney flake. The third pitch is by far the crux. Climb the off-width left facing corner pass one modern (2015) bolt and enter the squeeze chimney above. One C4# 6 and the bolt offer the main protection up the corner. Once in the chimney, if you are not comfortable running out a squeeze chimney, look for at least one small gear placement out left before the real grunting begins. The squeeze chimney is a squeeze, larger climbers will have a difficult if not impossible time getting through. My second was too large and climbed the outside edge no worries, but you would not want to try and lead the outside edge. Birth out the top and continue straight up to a ledge. Finish this pitch straight up into the bushy corner above trending right on suspect rock to a large ledge. We climbed a cool chimney pitch for the 4th pitch, but there is all kind of variations including traversing left and starting the rap back down. Dow


The route in general had two other decent pitches of climbing on it and is a solid alternative to Frigid Air Buttress (5.9), particularly if someone is ahead of you on that Icebox Canyon classic. These two routes meet up on the same ledge at the top of the first pitch of Middle Earth. The first pitch of Middle Earth is the crux of the climb, a true 5.9 off width on suspect rock. The second pitch rewards your efforts on that first pitch with a varnished hand crack. The third pitch should not exist. I am not sure why the FAer’s did not extend that 2nd pitch the way I describe below. The fourth pitch is rather short and uneventful. The fifth pitch is the tunnel and quite the fun experience. The last pitch could be done un-roped for the competent party. The descent is the same as for Frigid Air Buttress. Dow

Although Frigid Air Buttress can be described in 10 pitches, it is conveniently done in seven total. Frigid Air Buttress is a popular Red Rocks route with two key pitches at the grade, an off width 5.9 (4th pitch-4/7)) and a 5.9+ finger crack to finish (7th pitch-7/7). Both of the crux pitches involve stellar wall positions. Most of the rest of the climb is somewhat nonchalant. This route is very well protected from the wind. There is a weird lone bolt below the off width move and it is the only bolt on an otherwise completely free route (no bolted stations). Someone must have bailed with a bolt kit I guess, does the leader no good and the crux is well protected with gear. Dow