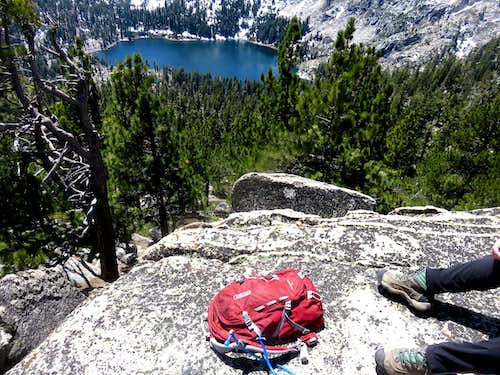 Frog Lake Peak is the unofficial name for Peak 8428, which rises just northeast of Frog Lake. Frog Lake is situated above the Euler Valley north of Truckee, California in the northern part of the Lake Tahoe Basin region.

Situated east of Castle Peak and behind the Tahoe-Donner ski area, Frog Lake Peak is seldom seen from a distance, but is commonly viewed by skiers and mountain bikers who frequent the Euler Valley.

Frog Lake Peak is typically snow-covered from mid-November through late-May. The drought has changed things, and allowed for hiking earlier or later. But this is typically a late spring/early summer/early fall destination. 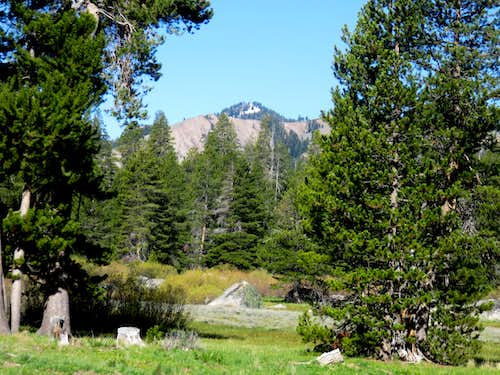 The primary trailhead is at the end of Alder Creek Road.  This is the most direct way to the peak with the easiest approach (all on dirt roads until the final scramble to the summit).  This can be reached either by driving north from I-80 in Truckee onto Northwoods Boulevard or driving west from Highway 89 north of Truckee on Alder Creek Road.  If coming from Northwoods Boulevard, head north on Fjord Road and take a left on Alder Creek.

The trailhead is a popular mountain biking area, and there aren’t too many parking spaces right at the trailhead.  A dirt road continues past the trailhead, but a barrier blocks automobiles.

There appears to be access from Carpenter Valley Road, which is 2 ½ miles from Highway 89 if coming from the east, and 1 ¼ if taking a right on Alder Creek Road from the end of Fjord Road.  However, you may encounter small sections of private land that block access.  If wanting certainty of legal access, start at the designated trailhead.


Another option is to start at the Pacific Crest Trail (PCT) on the south side of I-80 or the Rest Area off the I-80 Westbound and head from there to the PCT.

The route information is provided from the main trailhead at the end of Alder Creek Road.  The most direct legal approach appears to start here and generally climbs up and over Red Mountain, which is a worthwhile combination hike, since it only adds an extra ¼ mile round trip. If trying to approach from Frog Lake itself, you will be entering private land with armed guards (see Red Tape).

From the trailhead, follow the main road for a quarter mile,heading straight, and the road curves to the right and then switches back heading left.  Continue on the road straight (avoid a road heading left at a Y junction.  After about a mile the road turns rights and heads north.  Continue on this road, pass a gate, and you enter Crabtree Canyon. After about three miles from the trailhead, the road heads north, while a side road heads steeply up Red Mountain. Take this road.  Continue up the road until you reach the ridgetop. 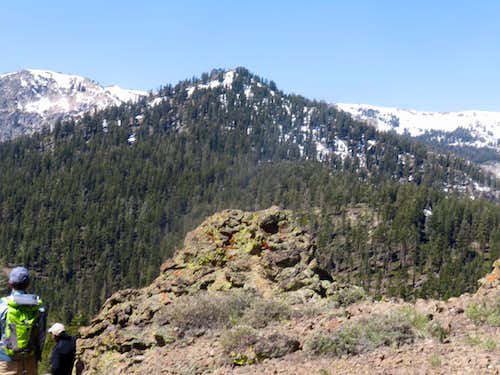 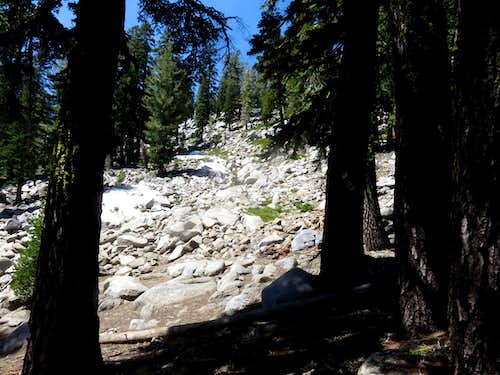 Heading up the boulder field in the forest

The true summit rock itself requires a Class 4 move to reach it. Most experienced scramblers can get up it, but won’t have the footing to get down.  If you have someone else with you, they can help you get down by holding your feet. 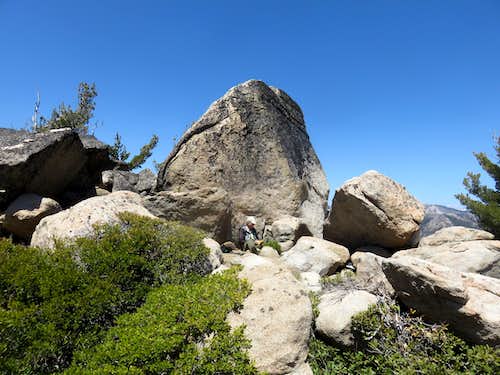 Descend the way you came.  Although it is tempting to do a loop hike via dirt roads, this is prohibited by private landowners who have non-contiguous land positions adjacent to non-contiguous National Forest Land.  Best to just avoid the land entirely and return the same way. The total round trip distance will be 10 1/2 miles, gaining about 2,100' en route, and gaining an additional 500'+ on the way back.

From the PCT trailhead, after you cross under I-80, look for the Summit Lake Trail junction.  This heads east.  Before reaching Summit Lake,another junction heads to the Warren Lake Trail.  This take you up to the Frog Lake Overlook at8,653’ in a little over 4 miles.  From here it is a steep, but doable three-quarter miles bushwhack over to Frog Lake Peak.  The total round trip hiking for this route is about 10 miles.  Be careful following the trail, especially in early season when there is still snow on the ground.  Bring a good map.  Elevation gain is approximately 2,000’getting to Frog Lake Peak; add another 500’ on the way back.

From Castle Valley Road you would combine the hike with Castle Peak.  Hike to Castle Pass and up to Castle Peak 9,103’.  This is about 3 ¼ miles and gets rocky at the top of Castle Peak, which will slow you down, as will the steep trail up to Castle Peak. Descend for a mile to the Frog Lake Overlook and then make your way to Frog Lake Peak.  It is about 5 miles one way.  But the downside is having to re-ascend Castle Peak.  The elevation gain for this route is about 2,600’, but you gain another 1,100’ on way back. 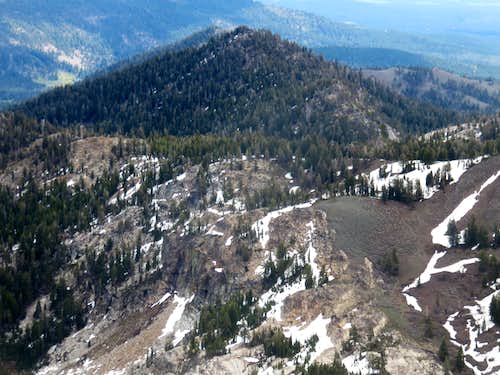 The Euler Valley trailhead and the other two trailheads are open to the public. From the Euler Valley Trailhead, you will need to ascend over Red Mountain. Although a road does head all the way to Frog Lake, it is not only private land with restricted public access, it is enforced by men with guns. These men were quite upset with our hike group who descended to Frog Lake to head back to the Euler Valley via a loop and they all were openly carrying guns. Avoid their land and ascend via the east. The landowner told me that ascending via the east is fine, but not allowed on their land.

From the east, there was a private land sign on the road towards Red Mountain.  This covered a very short section of road, perhaps a few hundred feet, which then led to signs for back country skiers.  I wouldn't be concerned about this small section of private land given its odd location adjacent to forest and back country skiing.  There is no other way to reach the mountain.