A look at the Loveland Pass/I-70 area from "Cupid."

The Front Range is probably Colorado's best known mountain range. The altitudes of included peaks, mountains and points have a staggering range from 5,200ft. up to 14,278ft (9,000'+ departure!). Because the variance in altitude is so overwhelmingly large, vegetation and geology is typically diverse. Animal life likewise, is just as myriad. On the steep, talus covered slopes of the alpine, one would see bighorn sheep, pika (coneys), ermine and marmots. Lower down in the coniferous forests: bear, elk, deer, pine marten, ferns and even orchids call the sheltering trees home.
The Front Range is often referred to as the 'Urban Corridor' because of it being a prominent western boundary to Front Range cities like: Pueblo, Denver, Colorado Springs, Ft. Collins and Boulder. The effect the Front Range has on these cities in terms of weather can equate into milder & warmer temperature inversions or extremely severe thunderstorms, large hail and frequent tornado's.

It is the longest mountain range in Colorado. It stretches for roughly 182 miles from Cheyenne, Wyoming south to Pueblo, Colorado. But in some circles, the southern terminus is a bit ambiguous with Pueblo being contested and even some folks include features as far south as The Spanish Peaks (outside Walsenburg). From east to west, the Front Range is roughly 97 miles across. The eastern border is easy to discern as the mountains lower to foothills and then ultimately hogbacks (in areas) where they bottom out onto the high plains. The western border however, can be a bit harder to figure out as the sea of ambiguous mountains blend seamlessly into the Ten Mile and Mosquito Ranges. The low point of the Front Range is Mariana Butte at a paltry 5,269' (1.606m) located just west of loveland near the golf course. The high point is Grays Peak at 14,278' (4.349m) just off I-70 near Bakersville. It is also the highest point along the Continental Divide, located off I-70 up Stevens Gulch in Clear Creek County.

When in Denver or further east out onto the plains, the Front Range almost acts as a kind of mountainous wall. I-70, US 285, State Highway 14 (Poudre Canyon), State Highway 24 (west of Colorado Springs), the Peak to Peak Highway and State Highway 50 (west of Pueblo) cut through the Front Range increasing accessibility. Because of this ease of access, The Front Range is almost limitless in terms of: hiking, climbing (Flatirons), skiing/snowboarding, mountain biking, fishing and even some off-roading. The Indian Peaks Wilderness seems to be one of the more popular places "to play." The Front Range contains most of Colorado's bigger cities and most of the population. It is essentially the Urban Corridor's playground.
With as many areas along the Front Range to choose from: IPW, Mt. Evans Wilderness, Brainard Lake, Poudre Canyon, Rocky Mountain National Park, Waterton Canyon, Roosevelt National Forest, Roxborough State Park etc. one could spend a lifetime exploring all that the Front Range has to offer without ever leaving for more westward adventures.

In 2003, The Colorado State Parks with the support of the citizens of Colorado, communities and stakeholders, initiated the Colorado Front Range Trail Project. The purpose of this trail is to create a multi-purpose trail from the Wyoming state line south to New Mexico, along the Front Range of Colorado. The 876-mile trail will link diverse communities, scenic landscapes, cultural and historic points, parks, open space and other attractions. When complete, the trail will connect a little more then 15 cities, 14 counties and many smaller towns and communities along its length.

To date, over 270 miles of the CFRT have been finished – one-third of the corridor. As of now, a final completion date for this massive trail project hasn't been finalized. This will give Colorado three MAJOR trail systems that either reside entirely in the state or bisect the area (Continental Divide Trail, Colorado Trail & Front Range Trail).

In terms of thinking about and trying to get a handle on where certain features are located along the Front Range, it's typically easier to dissect it into three parts. You have the Northern Front Range which, tends to be dryer and starts around North Denver/Boulder, the central portion which includes Denver proper south to around Colorado Springs, give or take and then the Southern Front Range which extends from COS south to the Spanish Peaks area, again, give or take. Just keep in mind, there are no empirical set boundaries.

The Northern Front Range includes features, peaks and areas such as:

The Central Front Range includes wilderness areas, peaks and canyons such as:

The Southern Front Range includes wilderness areas, peaks and canyons such as: 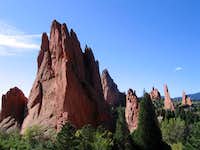 As one can imagine, having a 'virtual outdoor playground' so close to urban area's, there is going to be a lot of rules, regulations and private property one must deal with or "attempt to travail," it's inevitable. Private property is one thing and there's not much one can do to access it save for attaining prior permission. However, in terms of wilderness areas, state parks, national parks or national forests, things can get kind of confusing...especially concerning regulations. As I found out the hard way via a state ranger around Red Mountain Open Space near the Wyoming border years ago, some swaths of land literally look like a quilt of mixed use. Here is a quick breakdown and synopsis of what to expect with said terrain:

National Forest:
Simply follow this LINK. There are too many rules & regulations to copy and paste. Many can be easily side-stepped depending on activity of course but with SO MANY people 'loving' the outdoors to death, it shouldn't be any surprise that there are so many rules put in place. It is a bit disheartening but than again, it's for our future generation's sake of enjoyment.

Which agencies are responsible for wilderness management?
Wilderness is managed by four Federal agencies: the Bureau of Land Management, the Fish and Wildlife Service, the Forest Service, and the National Park Service.
National Wilderness Preservation System (in full)

State Parks:
Again, as with national forests, there is a plethora of regulations and rules that covers pretty much everything under the sun. However, here's a few tidbits more pertinent to campers/hikers etc.

1.) If one is going to enter, use or occupy State Parks when those areas are posted against such entry, use or occupancy, this is prohibited. Access to Division of Parks and Outdoor Recreation lands and waters is generally allowed between 5:00 a.m. and 10:00 p.m...daily. Restricted access generally will be allowed during other hours for camping and fishing.

2.) To remove, destroy, mutilate, modify or deface any structure, poster, notice, sign or marker, tree, shrub or other plant or vegetation, including dead timber and forest litter, or any object of archaeological, geological, historical, zoological or natural/environmental value or
interest on Parks and Outdoor Recreation Lands is not allowed. (This
regulation does not include removal of firewood from designated firewood areas, noxious weeds as defined by statute).

5.) To build or tend fires within Parks and Outdoor Recreation Lands, except in designated sites in Division-furnished grills or fireplaces; or in hibachis, charcoal grills, stoves and other metal containers, unless otherwise prohibited by these regulations. To allow a fire to burn in a careless manner; to leave any fire unattended; or to fail to completely extinguish any fire on Division of Parks and Outdoor Recreation Lands is strictly prohibited.

National Parks:
The actual site for explicit rules and regulations for Rocky Mountain National Park (ROMO) seems to be missing at the moment. So here's a LINK to related information you might find useful/helpful. Regulations are similar to State Parks but add to this, government regulations and where appropriate, Wilderness regulations. Things in and around national parks can get confusing (something else I've learned the hard way). It does pay to invest a little time to school oneself in the laws. 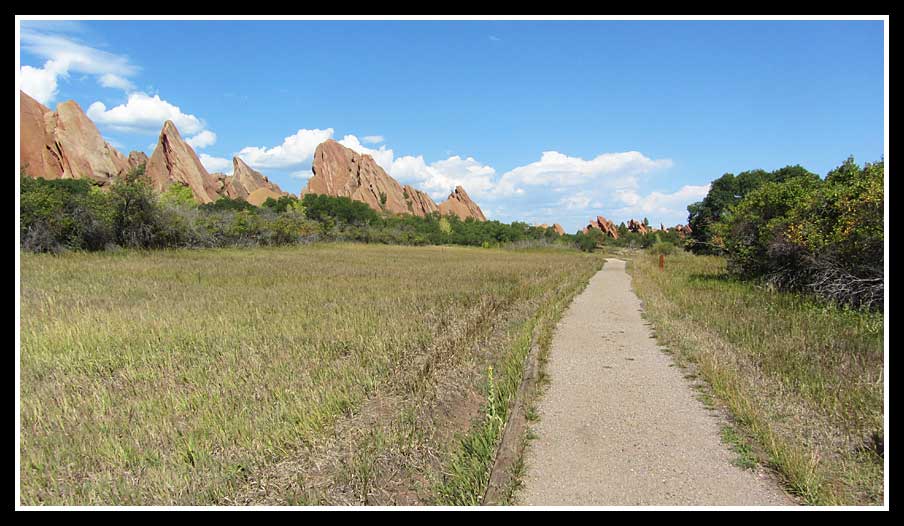 “Wilderness appealed to those bored or disgusted with man and his works. It not only offered an escape from society but also, was an ideal stage for the romantic individual to exercise the cult that he frequently made of his own soul.
The solitude and total freedom of the wilderness created a perfect setting for either melancholy or exaltation.
--Robert Nash
Excerpt from, “Wilderness and the American Mind”

“Thousands of tired, nerve-shaken, over-civilized people are beginning to find out going to the mountains is going home; that wilderness is a necessity...”
--John Muir 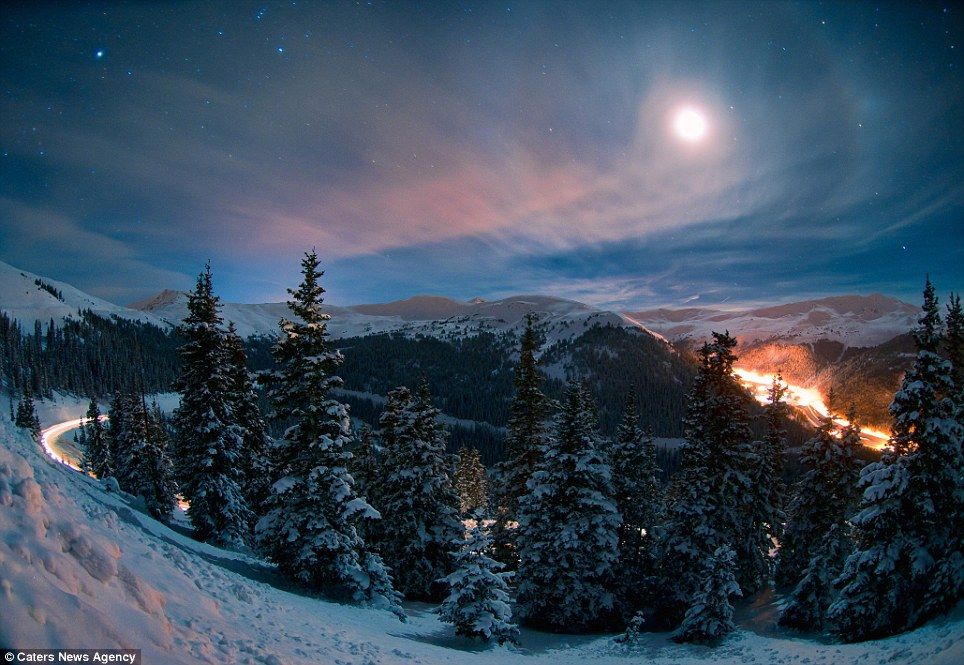 The night sky above Loveland Pass

Drainages of the Front Range

Geology of the Front Range

The geology of the Front Range consists of some of the oldest rock in Colorado. The foothills and 'hogbacks' along the eastern border as they butt up against the Urban Corridor are among the oldest and consequently, the most weathered.
The Front Range is one of the geological features that makes Colorado unique and technically, functions as the eastern edge of the North American Cordillera which ranges as a whole, from Alaska clear down to Southern Mexico.
Roughly 68 million years ago, the Rocky Mountains began to form & grow during what's called the Laramide Orogeny. The techtonic plates began to push against each other essentially lifting the Rocky Mountain region. Add to that, erosion over the next few million years and you have our current state of the Rocky Mountains.
The Front Range, Elk and Sawatch Mountains are faulted anticlines with the Elk Mountains in particular, being examples of those ancestral rockies.
The basement strata was vaulted or thrusted upwards, breaking & bending under the stresses, bowing over the top sediments. The 'hogbacks' along the far eastern edge of the Front Range are prime examples of this process.

The geology of the Front Range was first noted and studied by the Hayden Surveys of the 1870's. Everything from white granite, sandstone, conglomerates, schist & gneiss etc. make up the multiple formations and what is known as the mineral belt. In one day, one could be climbing the red sandstone towers of Garden of the Gods west of Colorado Springs, drive through ancient tidal flats and subsequent shale deposits of the Pierre and Denver Formations, and be camping under the massive granite protrusions of 'Ships Prow' in the Longs Peak Cirque twenty miles west of Loveland by nightfall.

Take a virtual FIELD TRIP throughout the Front Range.

Is there another Front Range?

I was just wondering if the "(CO)" was necessary?

Re: Is there another Front Range?

Fixed. I agree, thanks, Ryan!

Re: Furthest east and relief?

Thanks, John. I'll work on this description and make the requisite changes. Cheers, buddy!

Traditionally the Front Range southern border is the Pikes Peak Massif. I agree that the "Greater Front Range" covers Spanish Peaks and Fishers Peak (also pointed out by Noel & Fielder in a book Colorado 1870-­‐2000 Revisited: The History Behind the Images). I recently finished the Front Range Atlas, called "Eagle’s View of the Front Range" that covers those. You may download a pdf file of it from http://pikespeakphoto.com/aerials/front_range.html Note: it's a 53M file: 572 pages.