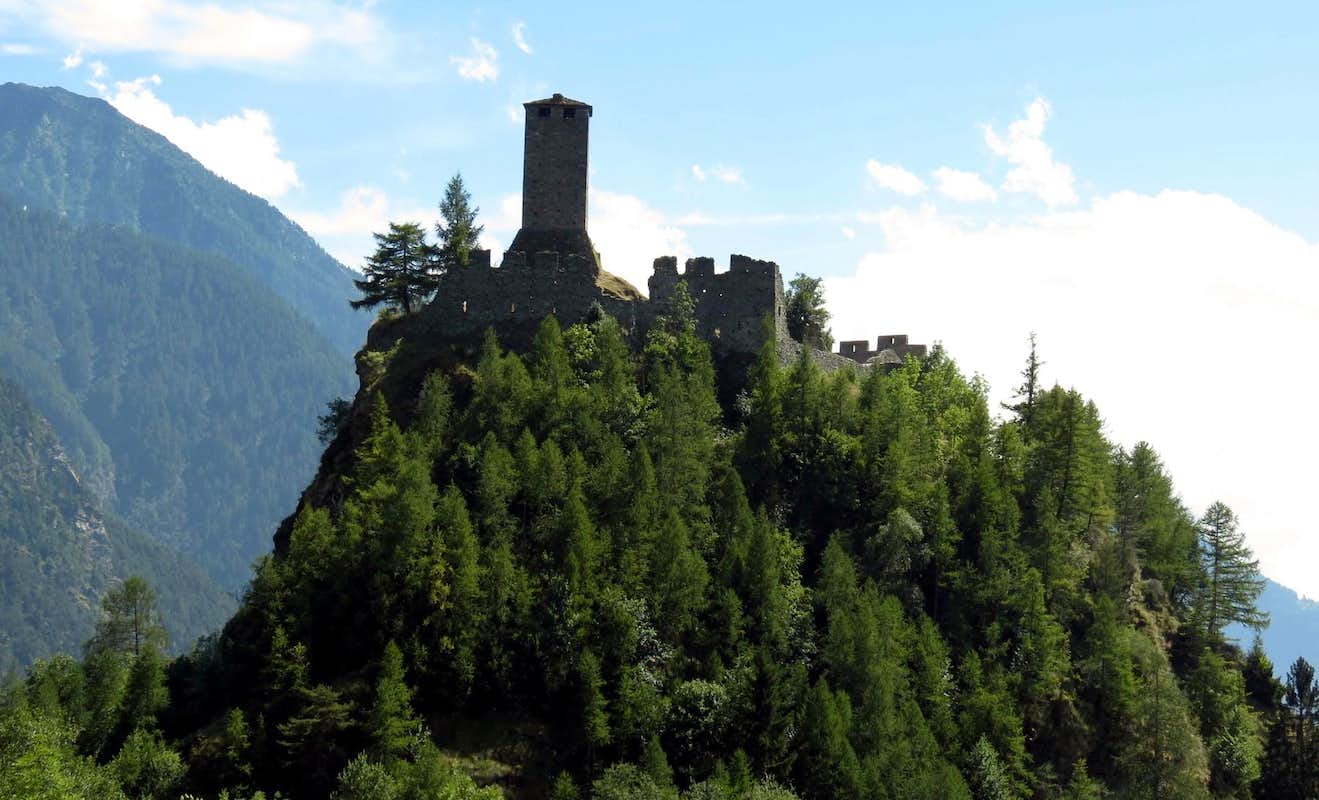 Coming from Verrès Municipality, immediately before the Basin Estoul (directly above the Commune of Brusson) meet the small but ancient Village of Archésaz or Arcesaz (1146m), which is the gateway to the above and along the Frudiera Walloon below the Northern Faces of Mont Nery or Nery, also known as Becca Frudiera (3076m). We're taking the long Ayas Valley or Torrent Evançon that comes from the more Western Glaciers of Monte Rosa, beneath the high peaks of the Lyskamms. Immediately after Arcesaz the junction 1145 metres (Roman name with "Arcus-Coesus" ie Arch Cut, while Brusson was "Bruxeum"; just beyond and above the Regional Road in locality Ciamousira or Chamosiraz 1375 metres there is the old gold mine with rock crystals) part a Municipal Road that reaches Villages Curien (1245m) and Graines (1383/1396m), the latter immediately preceded by its ancient Castle with squared Tower (1313m). From here starts (sign of ban on driving cars) a private dirt farms road that reaches, first toward the Northeast, the Ruine Pastures (1474m, 1568m), under the homonym Mount; the same then heads East towards Alp Ponteille (1553m), at the Torrent Chamen, to finally flex decisively towards Southeast achieving progressively in Southeast the Pastures Charbonnière, Collet, Restol, Pichiou, Rovetta and Champ Charlec (1766m). Just beyond, between two other unnamed alpages, the same ends, while part of the path n° 9, which reaches almost immediately the small Village Frudière (1849m; source with fountain). We're going to get from the media to the top of the Frudiera Walloon and, after reaching another alp with the name of Pichiou (1942m; not to be confused with the previous year under the Pointe de la Garda), the trail turns sharply to the South while another secondary unnumbered proceeds on the bottom of the walloon (more direct but certainly more difficult and therefore cheaper) to reach the Alp Chatelet (2027m). From here another change of direction at first South and then more toward Southeast decidedly East-northeast leads to the first of the two Lakes Frudiera, the largest (2035m, E; 001h'30/02h'00 from the cartel prohibition after Graines) and on the Western slopes of Mont Taf (2623m); through a circular tour along the South shore and then in the direction of the Northeast, winning a small rocky rampart which overlooks it, you will soon reach the second (2230m) and in a short time the Frudiera Pass or Frudièrecoll (2265m, EE; 00h'40 from first lake; 02h'15/2h'45 from start), located between the Mont Taf in North and West antetop Becca Frudiera or Mont Nery (3026/7m), between this walloon and this of Forca in Valley of Gressoney above Pont Trenta Hamlet. 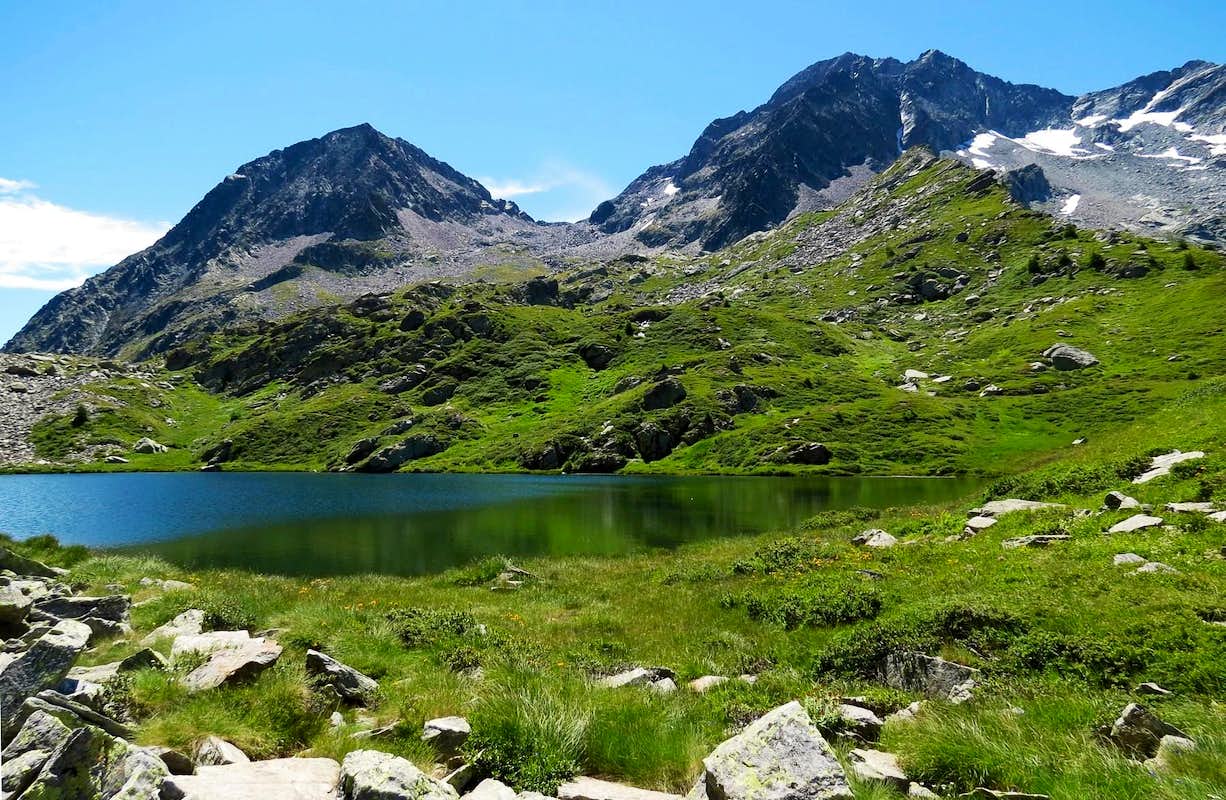 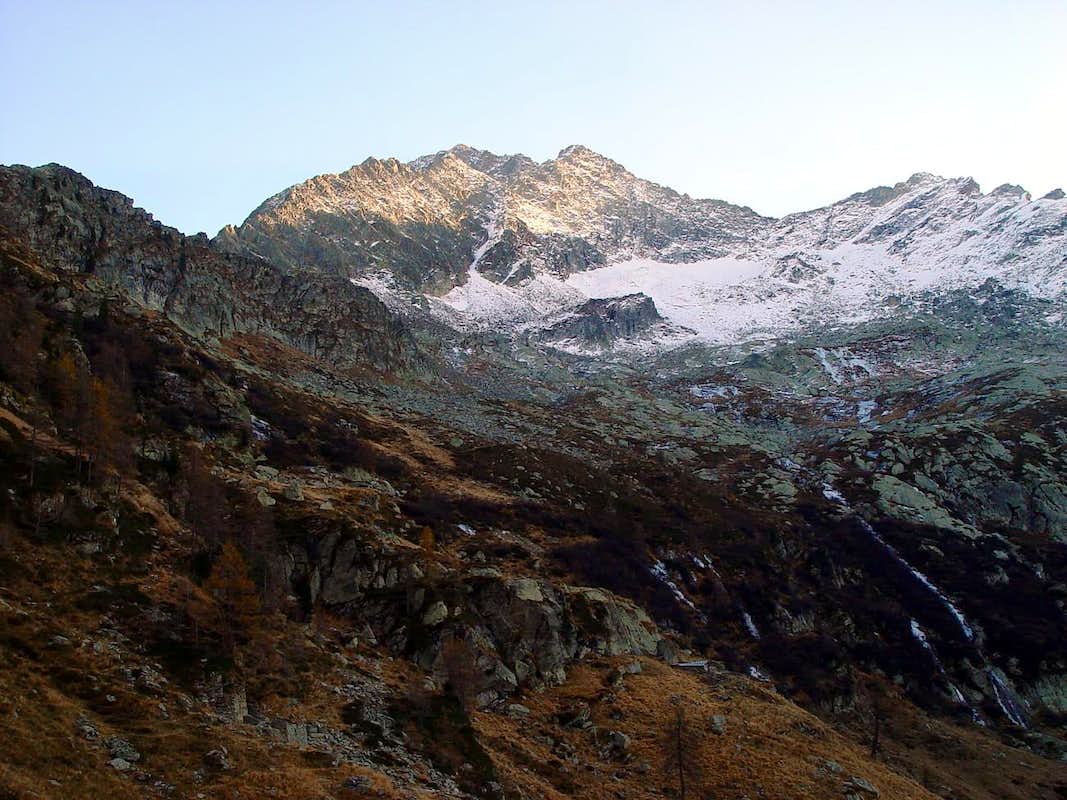 By car: By plane:
Graines Castle & Tower above Archésaz (Brusson), by emilius

*******
Description clockwise starting from the West above Graines to Hills, Passes & Summits to get to the West-northwest over Curien. (For the approaches see above Overview) 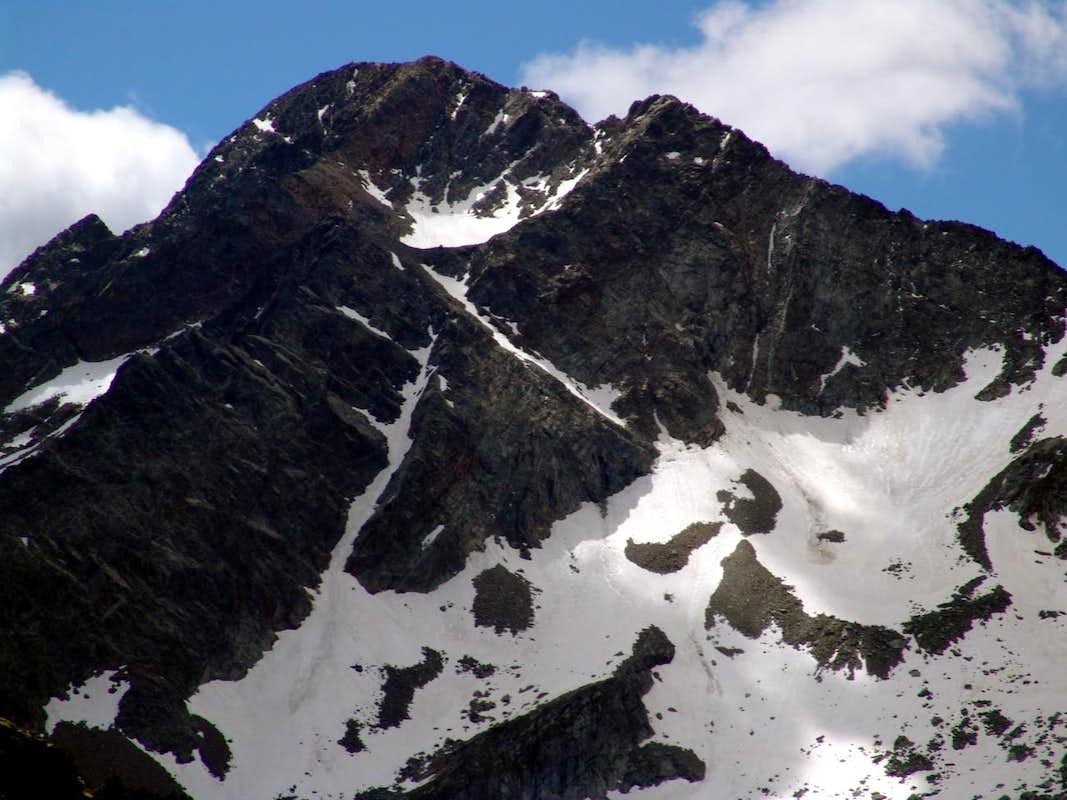 Mont Nery also Becca of Frudière from Northwest, by emilius
1)- : Pointe de la Garda (2332m). From the large saddle (2163m) or Northwestern Garda Pass through a small path or traces in West, immediately under the thread of short and easy East-northeast Crest (E; 0h '20 from the saddle; 1h'30/1h'45 from Fenêtre Alp or Ranzola Hill). Annotation and advice: you can reach the Punta de la Garda also down from the Punta della Regina; in this case it falls away below the saddle to the West by a short ridge which then becomes a wider and steep grassy slope with scattered trees. It is an easy run but that requires attention, especially if it is made with fresh snow. To do this small crossing must have some experience of how to Hiking in the mountains; in each case is to be avoided with the snow for what it is best to return via the North Ridge to the Ranzola Hill to eventually cross to the Southwest on North Slopes. 2)- : Garda West-northwestern Hill or Saddle (2163/6m). From Fenêtre Alp (2083m) through the path n°9A before in Southeast, after South to large saddle, between Punta della Regina and Punta de la Garda. Variant: from Arescoll through the unnumbered path in Southwest to junction with previous route neighbor the upper part of Reine Torrent (T/E/F; 0h '30/0h'40 from the both or 1h '15/1h '30 from the parking of Resort). 3)- : Pointe de la Regina (+; 2387m). From Ranzola Hill E/F; 0h '30/0h '40). Also from Garda East-southeastern Hill also Gombetta Pass (00h'20). 4)- : Garda East-southeastern Hill also Gombetta Pass (2268m). From Arescoll with easy descent crossing in Southeast to point 2145 metres; from this with Southwestern direction to mini pond 2186 metres and Hill (E/F; 1h '00/1h '10 from Ranzola Hill; 2h '30/3h '00 Estoul). 5)- : Mont Rena also Wisomattòspétz (+; 2512m). From Ranzola Hill through paths n° 3B/3A to the Garda Southeast Hill (E/F; 00h'30); from this to small Saddle of Pra Bianco (around 2400 metres; not to be confused with the Pra Bianco Pass (2331m), just to the East. Signals and path-traces) and with small path and following debris traces on the North-northwest Ridge to Summit (EE/F+; 01h'10/01h'20 from Ranzola Hill). 6)- : Mont Taille (2561m) and nearby Weissmatten (2456m). a)- From Rena with traverse in crest and, after a small carving 2492 metres, circumventions to the Western Face Mont Taille or with rock climbing; b)- continue East on terminal crossing on Western Crest of Weissmatten. Remark: the entire crossing of these three Summits requires experience and prudence because, although the path is signaled, the same spread for about a Kilometer through grassy slopes very steep and exposed to the West, Southwest, South-southwest and the overcoming of rocks not difficult (I°/I°+) but often crumbling and rotten; is more a path to chamoises Hunters rather than suitable for Hikers. Be avoided altogether in snow presence, especially when it is fresh and tends to glide over the grassy slopes (EE/A; F to F +; 1h'15/01h'45 for the both complete traverse). 7)- : Mont Taf (2623m). From Mont Rena with traverse on ridge to the Sout-southeast on North-northwest Ridge, discarding West the Mont Taille (EE/F+ 01h'30/02h'00 from Ranzola Hill. Also from Frudièrecoll before through path n° 1A up to the point 2416 metres (continuation of the same with descent towards Petersch Gombò and Gressoney), after along Southeast short Crest with easy but exposed route (EE/F+; 01h'00/01h'15). 8)- : Frudièrecoll or Frudiera Pass (2265m). Starting Graines Village with hemi circular route on dirt road and path to first lake; from this to second Frudière Lochs and Western Slope in terminal part (EE; 00h'40 from the first Frudière Lake; 02h'15/2h'45 from departure by Graines). 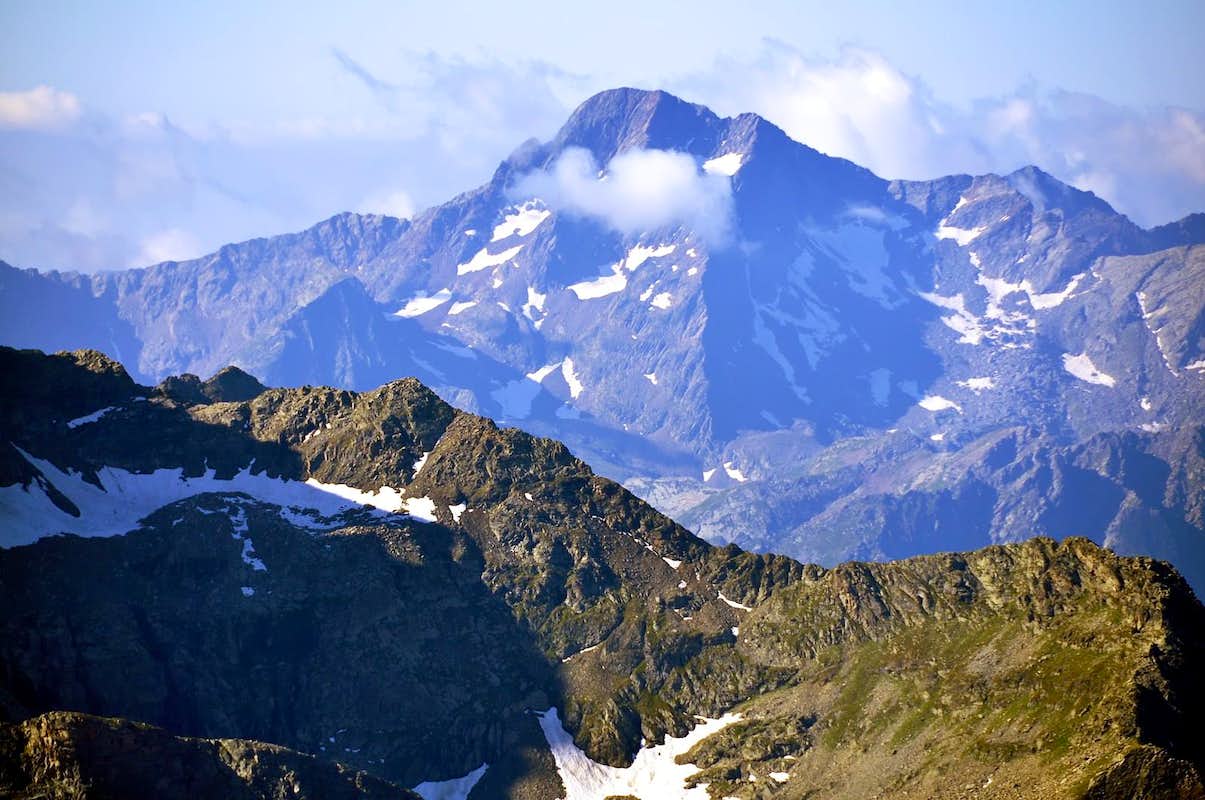 Mont Nery or Becca of Frudiera from North-northwest, by Antonio
9)- : Marienhorn also Corno Maria (2767m). This mountain is located on the end of the Ridge Northeastern of Mont Nery, where precipitates with a large rock face above the Forca Walloon and the Alp Henniciuken (2000m), in the Gressoney Valley. The constant fall of stones from the same, despite the compact appearance of its plates, to prohibit forced by the beginning of 2000 the path (barrier with sign) downhill to the Village of Trenta (1158m) at the Lys Torrent; here you have to use to get off the trail n° 1A, after a short climb to Mount Taf, shall be directed towards the Northeast, reaching the Weissmatten Cable Car (2043m), whence the Camping Gressoney. You can climb from the Pass of Frudiera reaching the collar of about 2680 metres on the the Northeast Crest of Nery and through the easy and short, but exposed to the Southeast, Southwest Ridge (EE/A; 01h'15/01h'30 from pass); or going directly scree followed by large blocks on the West Slope. So June 25th, 1995 by Osvaldo and Marco Cardellina Cossard starting Estoul Village at the Ranzola Hill and subsequent crossing on Mont Rena, Mont Taille and Mont Taf to the Hill of Frudiera; from this through upper moraine with the final climb through the West Wall and descent to the collar 2680m, via the Southeast Ridge. 10)- : Mont Néry also Becca di Frudiera (+ 3075m). We list all the routes starting from the East, North and West into the Basin of Frudière: a)- From Graines to Frudière Alpage and to the more great Frudière Loch; after through Northern Slope of large Saddle about 2890/5 metres and West Ridge to the Western Ante Top (3027m) and Top (A/F+; from PD- to PD; 02h'45/03h'15 from Lake; 05h'15/05h'45 from Graines Village). b)- Through Northwestern Face of Ante Top 3027 metres, upper snowfield, small triangolar wall and West Ridge in final part, by Guido De Rege and Giuseppe Wuillermin in July 1925; first winter Emilio Cappelli and Alberto Linty in February 26/27th, 1965 and first solo by Pier Luigi Ferrero May 02th, 1987; all the ascents through the left gully of around 250/60 metres in final part below the West Ridge (A/PD+/AD-; 02h'30/03h'00). c)- Through Northern E'peron to Ante Summit 3027 metres and West Ridge. From Frudièrecoll or from two Frudière Lakes directly on North small Spur, by Giulio and Tito Zanetti in July 31th, 1923, with passages from I°//II°/II°+ up to III°-/III° along 600 metres (A/PD+; 03h'00/03h'30). d)- Through Northern great snowfield (27°/32°), triangular snowfield (33/35°), little gully (36°/38°) to Western Ridge, between Ante Top 3027 metres and the Summit, and final easy climbing by the same (A; from F to F+; 02h'30/02h'45 from Frudière Pass; 05h'00/05h'30 from Graines). e)- From Frudèrecoll through a large snowfield (27°/30°) on Northern Slope and rowards North-northeast Crest in superior sector (in the last quarter of the ridge) and Western Ridge in terminal part, by Edoardo Ferrero, lone in Summer 1984 (A/F/F+; 02h'00/02h'15 from Frudière Pass). f)- From Frudèrecoll through Northern Slope and directly to Summit on North Rib, by Osvaldo Cardellina, solo in October 05th, 2002, with passages from II° to III°+ (A/PD+/AD-; 03h'30/4h'00 Frdièrecoll; PD+/AD-; 2h'15/02'30 from the rocky base in the last around 230/40 metres). g)- From Frudèrecoll through Northeast Crest from the collar around 2680 metres, between Marienhorn and Mont Nery, by Pier Luigi Ferrero, solo in Summer 1985, with passages from I°+ to II° (partially route by via with different workarounds South, below the edge of the Crest); (A; from F+ to PD; 03h'30/04h'00 pass; 02h'00/02h'15 from collar). Still not made in integral; probably challenging with exposed climbing on not good rock. 11)- : Mont Solaron or Punta di Soleron (2888m). From the first Frudière Loch through large Saddle about 2895 metres and Southeast Crest. 12)- : Pointe Champ-Long or Champlon (2671m). From Mont Solaron through crossing and East-southeast Ridge. 13)- : Fourchette or La Forchetta also Nanta Pass (2202m). From Frudière Alpage or from Chatelet Pond without paths. 14)- : Cleve de Moula (2241m). From Restol or Restoly (1682m) or from Champ Charlec (1766m) Alpages through two paths n° 9C passing on Balavra Alp (1881m) or more to the East with dirt road to Rovetta (1777m), Chavanne (1871m), Oreille (1991m) and next unnamberede path to previous route, passing under Merian Alpage (2019m). Possibility of descent always with path to Moula Alp (1885m) into nearby Chasten Walloon. 15)- : Becca di Meriau or Bec de Merian (2177m). From Restol pasture through the Forest on Northern Slopes, pathless, also with crossing from Cleve de Moula by Southeast brief Crest. 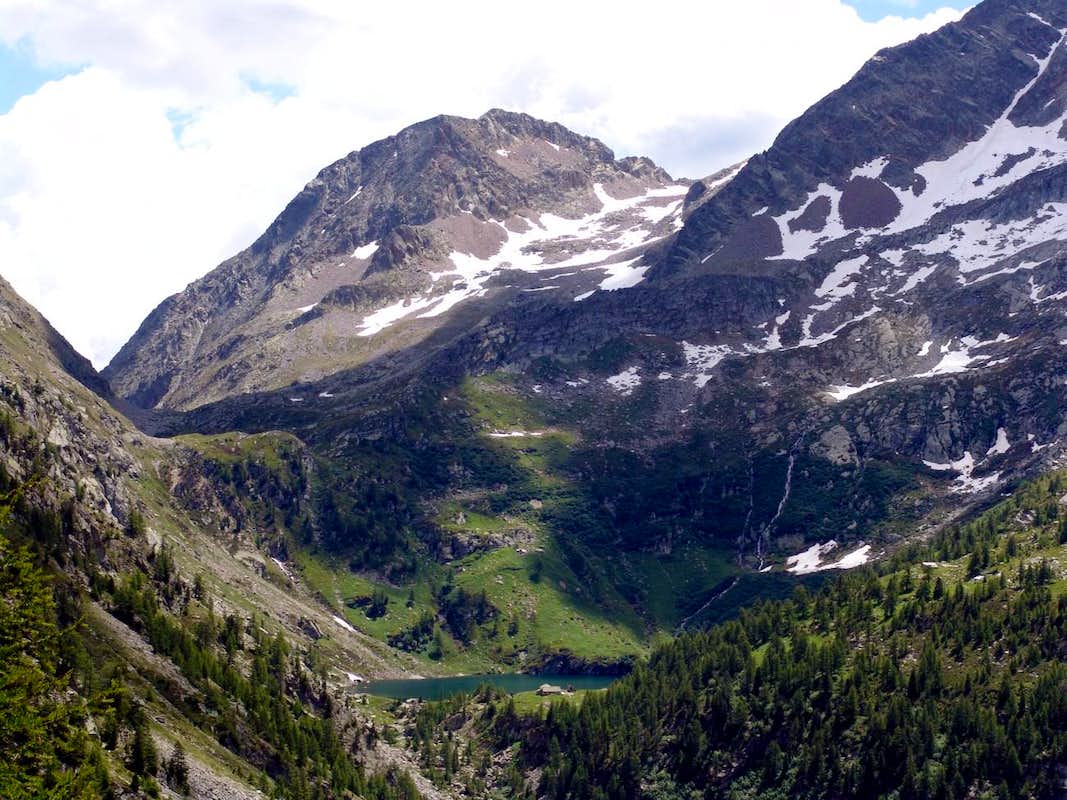 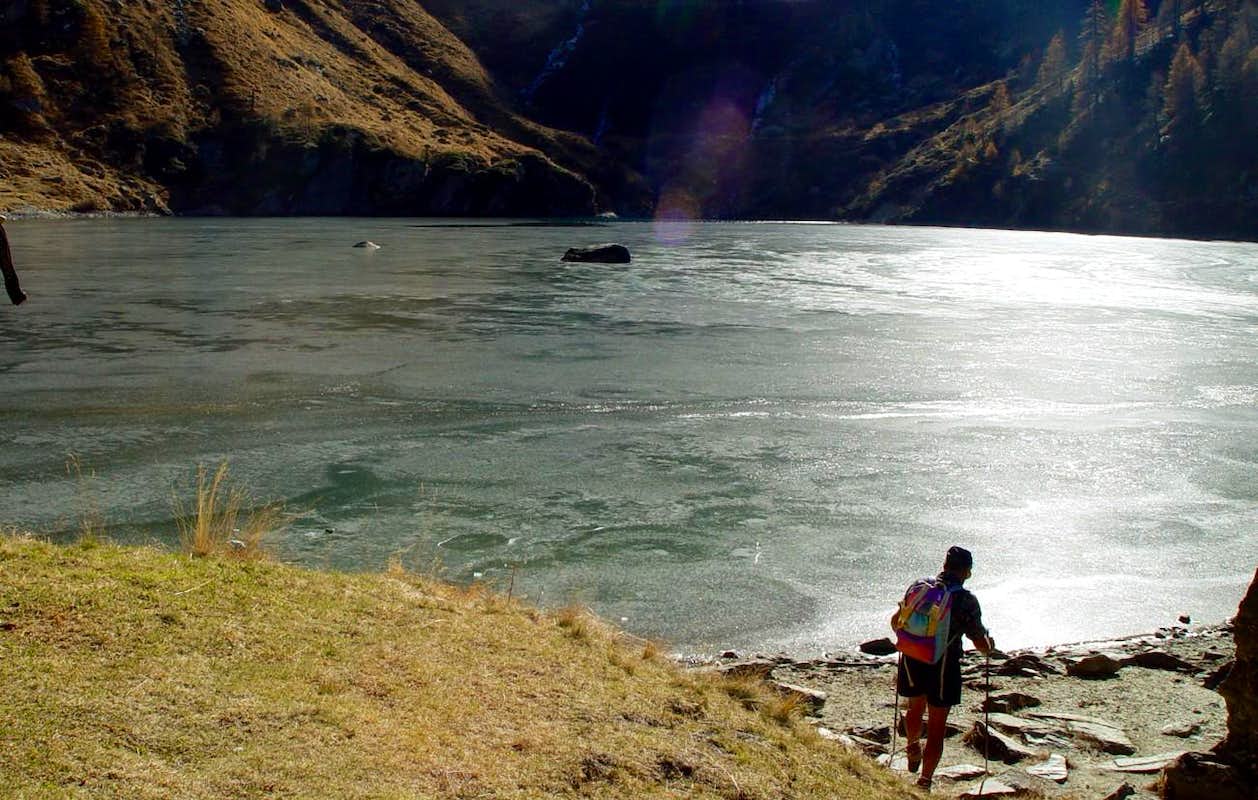