See main page for Hamperokken, but continue driving past the parking described. Keep driving to the next stream, which is called Skilelva on the map. There are dirt driveways to the left and the right at the bridge. Park out ot the way (these are private ways), and begin the ascent up the left (east) side of the stream. 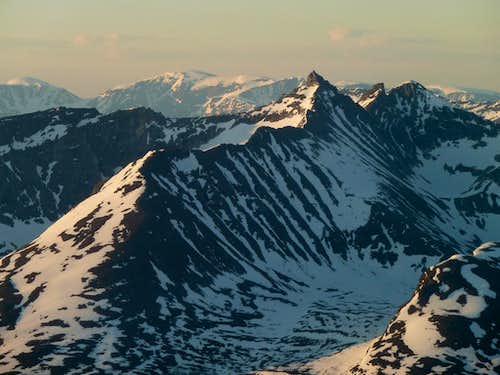 Many summits visible from Tromsdalstind.Hamperokken in the center foreground.  The entire middagsaksle ridge route is visible.  It's the long ridge split in sun\shade.The skyline in the back shows part of the Jiekkevarre traverse.  Look from the summit of Hamperokken, behind and just to the left of the summit pinnacle is Holmbuktind.  One can see the top of the skiing route.  Follow the ramp of snow to the pass, and take a sharp right to get to the summit.  From there, continue left to Jiekkevarre, the highest dome.  Continue looking left to the gap and onward to Kveita, which is the next dome of snow on the far left edge of the picture.Also in this photo, in the foreground to the left of Hamperokken is Gabrielfjellet, which is an extension of Hamperokken, but can be considered a separate peak.The peak immediately to the right of Hamperokken is BjÃ¸rnskardalstind (trans. Bear Pass Valley Peak.)
Gabrielfjellet could be considered a separate peak, it's mass is actually greater than that of Hamperokken. But hidden from view is a connecting ridge between the two masses, so in reality (IMHO) Gabrielfjellet is just a large ridge extending from Hamperokken. This route does not reach the summit of Hamperokken, as the connecting ridge is beyond the capabilities of the skier\hiker.

From the highway, begin a gentle diagonal away from the stream and toward the ridge. From this point, the route appears to climb a face before connecting to a gentle ridge slanting up and right. This is an illusion. After around 30-45 minutes of gradual traversing left, the climber breaks out ot the scrub birch above all vegetation. Depending on the time of year, and snow cover, the climber must choose the best route of ascent. For the most part, staying slightly left will be the best, though too far, and the terrain gets uneven and rocky.

At 900 meters, the route eases to an ascending plateau. Traverse up and right (south) along this plateau, ignoring what appears to be the summit to the left. At just over 1200 meters the ridge crest is gained, and can be traversed a short distance to a high point. From here, the ski route ends, and a glorious descent begins.

Continuation: WARNING: the following information is just from observations, I don't know anyone who has actually climbed the rest of the ridge:
From the skiers high point, a short easy descent of about 15 meters reaches the connecting ridge. Following this will involve some 3rd class traversing, though sections of the ridge are wide and almost perfectly flat. When coming to the summit spire of Hamperokken, a traverse would be easiest made to the right (west) across the north face. Good snow and ice is critical here as it's steep and loose, probably around 60 degrees. Following the traverse, the standard route is reached for the summit.
Here is a link showing the entire route in photo's, description in Norwegian: Photo series

Winter/Spring: Randonee or telemark ski equipment.
Summer/Fall: Boots and good trekking poles. It's surprising how exciting steep wet heather can be at times.


Why should I do this route?

This is great spring ski route because it for the most part faces NNW. This extends the ski season and protects it from rapid melting and avalanche danger. The profile together with the prevailing winds also work to the skiers advantage, creating a stable snowpack without a lot of wind loading.