The Gailtal Alps are located in the wedge between the Drau / Drava and Gail rivers in the southern Austrian states of Carinthia and East Tyrol. While the bulk of the range which is located in the eastern two thirds is composed of rather unimaginative mountains (with some notable exceptions) the western part - the Lienz Dolomites - makes up for this lack of drama. Here you find the vertical limestone faces which are typical of any of the Dolomites ranges and with the Hochstadel North face the subgroup is home to the third highest north face of the whole eastern Alps.

The eastern part of the Gailtal Alps is much lower and less impressive. Its highest summit is Reisskofel (2371m); also the likes of Torkofel (2275), Latschur (2236) and Spitzegel (2119) reach an elevation considerably higher than 2000m while the rest of the range stays below or around that mark.

Still most of the Gailtal Alps have not been developed for downhill skiing. There is one ski area around Goldeck near Spittal (to the north-east of the group and several lifts around Villach in the south-east. The remainder of the group is unmarred by construction. Actually most of the mountains are still below the timber line so that views are rare except from the highest or most rugged summits.

Stepping aside of (or rather down from) the mountains you can find two noteworthy lakes in the area. The largest one is Weissensee, a fjord-like narrow lake, which stretches for more than 20km in west - easterly direction between the Latschur- and Spitzegel Groups. The lake reaches a depth of almost 100m in is thus one of the most profound lakes of the eastern Alps. It is located in a sheltered valley and is the most important tourist attraction in the Gailtal Alps. Consequently you can find a lot of tourist villages, all concentrated on the north-western shore. The eastern part is free from any construction and offers a beautiful hike along the shore line. In contrary to the other large lakes Weissensee is not the product of glacial processes. It has a natural dam formed by debris flows (thanks to wuedesau for this info).

The second of the lakes is Pressegger See east of Hermagor, the main and central town of the Gailtal Valley. It is also a tourist attraction and is imbedded in a large moor. The lake itself used to be about 6 times larger in historical times but has silted up. There is a campground near the lake, also quite a number of hotels but beware of the mosquitos!

The Gailtal Alps can be divided in the following six subgroups (listed from west to south-east):

Even if Gailtal Alps are usually considered as part of Southern Alps, they geologically belong to Eastern Alps (Austroalpine, the so-called 'Drauzug' - Drau Chain), as they are lying north of Periadriatic fault. When the Central Alps (Hohe Tauern window) were rising, these sedimentary mountains were pushed towards the south, while the majority of other sedimentary mountains remained on the northern side, today forming the Northern Limestone Alps.

On the image above we see that the big majority of Gailtal Alps summits is built of sedimentary rocks (light blue) of various age. The exception is Goldeck massif (but not also south of it lying Latschur and Staff). This one is built of crystalline rocks and geologically belongs to the nearby group of Kreuzeck, on the other side of Drau valley. Crystalline rocks are seen also on many places in the valley of Gail (in the southern part of the group), where we can find also old paleozoic rocks (quartz phyllite, slate and sandstone).

Going back to the highest mountains, made of sedimentary rocks, we observe that the majority of Lienz Dolomites (exception are some summits on the south) is built of dolomia principale, but the high Gailtal Alps summits more towards the east are built of limestones and dolomites of a bit older Wetterstein formation, but also of Werfen and reef limestones (the latter are on Dobratsch summit). In general the bedrock lithology of Gailtal Alps is quite complex. 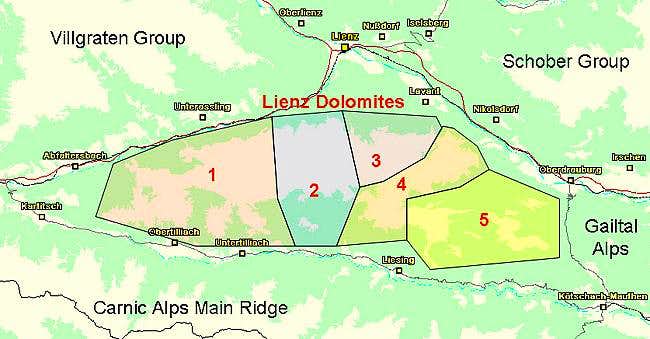 Interactive map of the Lienz Dolomites. The numbers refer to the respective subgroups as given below

The Lienz Dolomites Subgroup has been described in its own page. You can find the highest summits of the Gailtal Alps in this group. Almost all of the mountains are higher than Reisskofel, the highest one outside the Lienz Dolomites. The Group is bounded by the Gail rivers (Tyrol Gail, Carinthia Gail) to the south and the Drau / Drava River in the north. To the east it ends at Gailberg Saddle between Kötschach Mauthen and Oberdrauburg. As seen above and on the Lienz Dolomites Page, the group is divided into five subgroups:

For the summit listings please refer to the Lienz Dolomites Page. 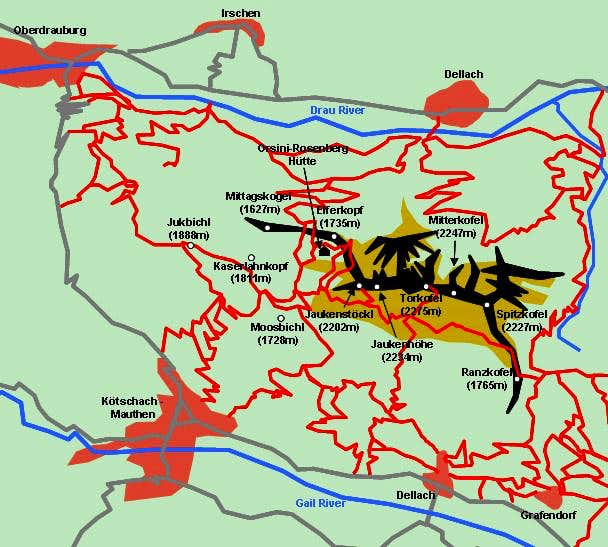 The Jauken Group is one of the smallest groups of the Gailtal Alps. It is (again) bounded by the Drau / Drava River in the north and the Gail River in the south. Its eastern boundary is Gailberg Saddle between Kötschach Mauthen and Oberdrauburg, its eastern one is formed by Ochsenschlucht in the north and Finstertal in the south. With a few solitary exceptions all summits of the Jauken Group are located along one short ridge. There are a lot of old and abandoned mines on Jauken, all for the exploration of various metals. The highest summit of the subgroup is Torkofel at its centre. 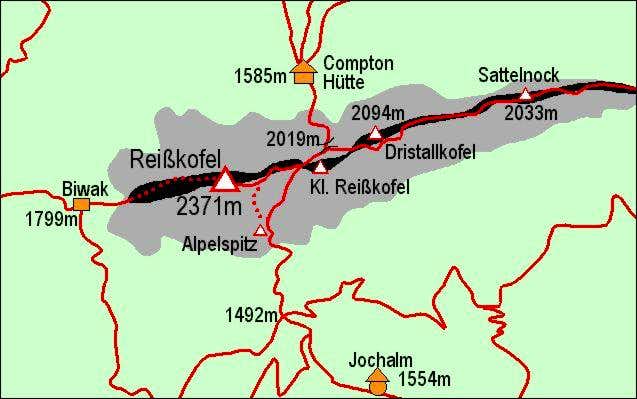 Reißkofel is the highest summit of the Gailtal Alps outside of the Lienz Dolomites Subgroup. The corresponding group is very similar to the Jauken Group, It consists of a single ridge with the odd summit included at one of the sides. The group is bounded by Ochsenschlucht and Finstertal to the west, Drau / Drava Valley to the north, Gail Valley to the south and highway B87 along Kreuzberg Pass to the east. Most of the group remains below the timberline only Reißkofel and the surrounding summits loom above it.

Summits aside of the main ridge 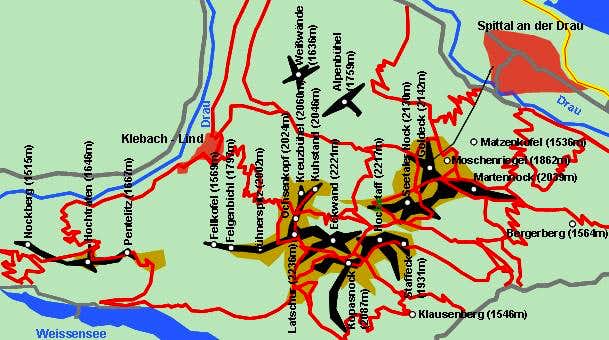 The Latschur Group is located to the north of Weissensee in the northern bend that the Drau / Drava River does before reaching the city of Spittal. With Goldeck it has the most developed ski mountain of the Gailtal Alps and the proximity to Wessiensee ensures that it is much visited. The highest mountai, Latschur, is a rounded, hill-like summit, which is a ski tour destination, just like Eckwand to its east. The ascent routes to both summits start in the vicinity of Weissensee. The mountains are located on several short ridges, one for Latschur, one for Goldeck and one western ridge with lower summits. Again there are some lower mountains, which have to be treated apart. 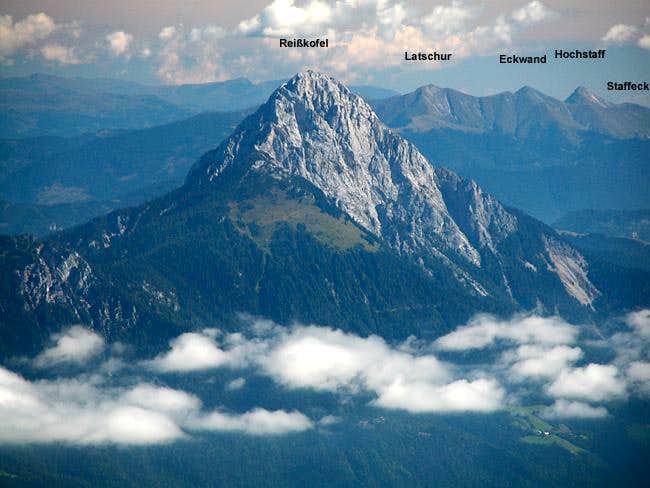 Otherwise Goldeck is, despite of its relative decent altitude, a mountain, which is much degraded by civilization. All sorts of roads and cart-roads, chair-lifts and ski-lifts, huts and restaurants cover the area. And, on top of it, the summit is "decorated" by a high telecommunication tower. In winter it is a quite broad ski resort, in summer, people easilly get on high altitudes and then walk around. The summit is most easilly reached by a cable-car from Spittal and by a good mountain road (toll) from the east, from Zlan. All this said, Goldeck is nevertheless a fine panoramic summit, offering nice views on all sides.

Single mountains across the Group 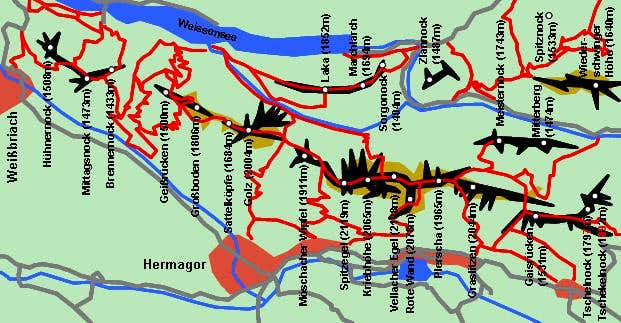 The Spitzegel Group is located to the south of Weissensee between the lake and the Gail River. Its western boundary is B87, the road to Kreuzberg Pass, its eastern one is the Drau / Drava River as it nears the city of Villach. The Group is a long west - easterly ridge with several smaller grouplets (how about ridgelets?) to the north. Most of the summits don't top the timberline with Spitzegel and Graslitzen being the notable exceptions. The going along the long ridge, which can be hiked, is rather rocky and exposed. You'll find several serious scrambling sections. Around Kriebhöhe and Vellacher Egel you can find two Klettersteige (Ferrate) with sections secured by fixed cables. 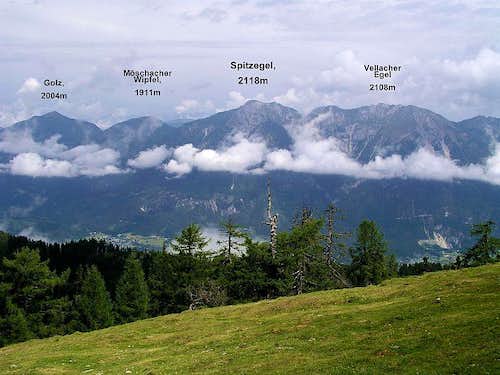 This is a little group to the south-east of the Gailtal Alps. Its highest summit is Dobratsch, a mountain renowned for its views of the Carnic and Julian Alps, as well as the Karawanke Group. Moreover it was the site of a gigantic rock fall which was induced by a massive earthquake in 1348 burying a number of villages beneath it. Today the Villacher Alpe Subgroup is one of the most frequently travelled locations within the Gailtal Alps. The city of Villach, main city of the area, is very close by and you can reach the group from all sides. Its boundaries are the Gail River in the south, the confluence of the Drau and Gail Rivers to the east (in other words the city of Villach, where this confluence occurs), Nötschbach Valley to the north and the town of Nötsch to the west.
Villacher Alpe

The Gailtal Alps on SP

So far there have been quite a number of Gailtal Alps Mountains, notably in the Lienz Dolomites, which have been submitted to SP. This section is supposed to give an overview. The general direction is west to east.

Reaching the east of the range
Getting to to the east of the Gailtal Alps, notably to the cities of Spittal and Villach, is rather easy. They are located on motorway A10, which starts at Salzburg in the north of Austria and ends at Villach. From the south you can reach it via motorway A23 from Udine (Italy) which turns into A2 in Austria. This Motorway also ends at Villach.

The Gailtal Alps mountain range can be climbed / hiked without any restrictions. The most impeding restrictions you can find in the villages around Weissensee. It is very hard to find parking places there since every spot seems to belong to a hotel or an apartment building. Like all alpine mountain ranges, the Gailtal Alps are used for extensive farming. Much of the area therefore has been fenced off - you can however cross the fenced off meadows without permits but be sure to close all gates and keep dogs on leash.

Hiking season is late June through late September. All summits (with the exception of the most vertical Lienz Dolomites ones) are accessible in winter using tour skis. Goldeck in the Latschur Group is a well known downhill ski mountain.

Listed here are the refuges as well as the Alms, Farms where you can get food and lodging.

Free camping in the group is discouraged. There are three quite a number of refuges all over the Gailtal Alps (see above) so it should be not neccesary to pitch a tent. In the Lesachtal and Gailtal Valleys you can find a campground attached to almost each village.

For a weather report look at one of the pages below:

Maps
I have been using maps by Kompass Verlag, both scaled 1:50000. Especially for the Lienz Dolomites this scale is a little too large.