Gaiskogel is quite a common name for mountains in Austria, only in the Stubai Alps there are already two mountains called Gaiskogel. One is situated in the Sellrainer part, the one described here is situated in the Stubaier main ridge. The Gaiskogel has a pyramidal shaped summit which can be seen nicely from both the Hildesheimer Hut and Siegerlandhut. Because of this pyramidal shape it is quite a remarkable summit unless its limited height compared to the neighbouring summits. The Gaiskogel can be reached from the trail between the Hildesheimer Hut and the Siegerlandhut. There is no marked trail to the summit which makes it a not frequently visited summit also because there are way more interesting summits in the environment like the Zuckerhütl. The Gaiskogel can be summited best during a two day trip between the aforementioned huts. With bright weather many peaks in the Ötztal Alps can be seen because the valley on the southwest side of the mountain provides an open view.

Summit panorama of the Gaiskogel, view from SE (left) to NNW (right).

The summit can be accessed from the village Sölden (1368m) in the Ötztal, from there go up in the eastern valley (Windachtal). One can travel the first part by bus (€7 fee) towards Gasthof Fiegl (1968m). From Gasthof Fiegl you have to go by foot towards the Hildesheimer Hut (2900m) or the Siegerlandhut (2710m), both huts are reached within 3 hours from Fiegl.

Siegerlandhütte: follow trail 140 towards the Hildesheimer Hütte. Leave the trail at the Triebenkarsee around 2700m and go to the western border of the lake. Here starts the climb to the summit which is not marked although there are some spurs that can be used. First go in WNW direction, later more NW and close to the summit in N direction. The climb is steep and goes through terrain that is a mixture of grass and rocks, but it never becomes true rock climbing. Despite the low difficulty one has to walk carefully due to the steepness of the SW face that is climbed, therefore the climb is not recommended for inexperienced hikers. Descent is in the same direction until the Triebenkarsee, from there you can choose between the paths to the two huts. 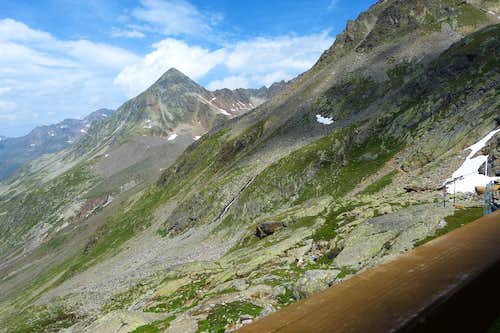 Gaiskogel seen from the Hildesheimer Hütte, with on the right it's cable car hut. The Gaiskogel is the dark pyramid shaped summit in the right half of the picture. To the left you see the Pfaffenschneid (3498m) which is covered by the Triebenkarlasferner (glacier). Completely left, part of the Aperer Pfaff (3351m) is visible. August 2013.

Hildesheimer Hütte: descent about 10 minutes to the Windachtal, at 2800m altitude there is a marked trail to the Siegerlandhütte (route number 140). Follow this trail to
the lowest part (2720m when crossing a river by a wooden plank) and subsequently the highest point; the Gamsplatzl at 3019m, which is the pass between the Gaiskogel and the Pfaffenschneid/Zuckerhütl. Descent to theTriebenkarsee, a beautiful lake at 2700m. See description above.

A more direct climb starts at the Gamsplatzl, from there the north ridge can be followed at the eastern side (see left picture below). This route is a much more difficult rock climb than the route described above. 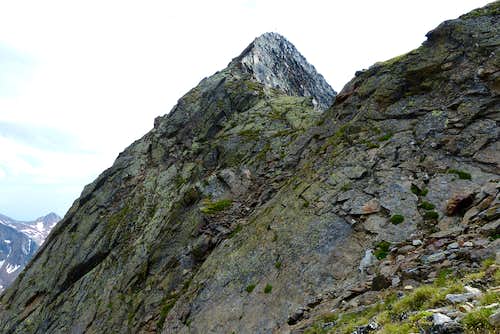 NE ridge of the Gaiskogel where the direct climb from the Gamsplatzl should start. 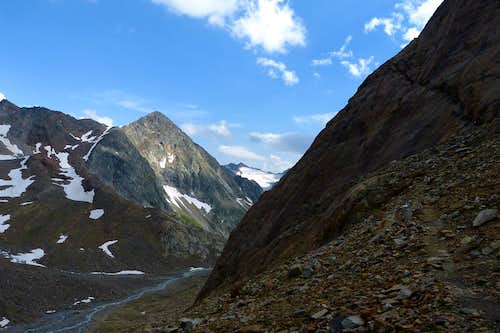 Gaiskogel seen from the north, picture is taken below the Gaißkarferner. 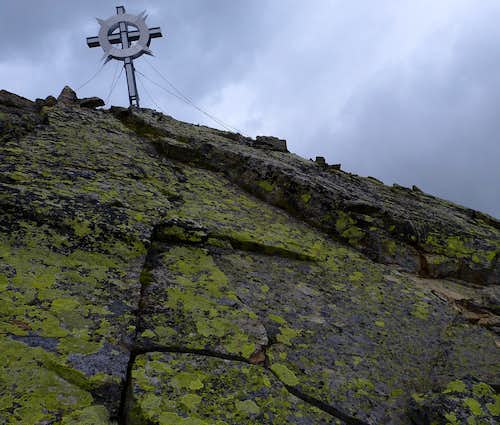 Summit of the Gaiskogel (3129m) with the cross on top of it. In August 2013 the cross was damaged by the wind and therefore rather dangerous.