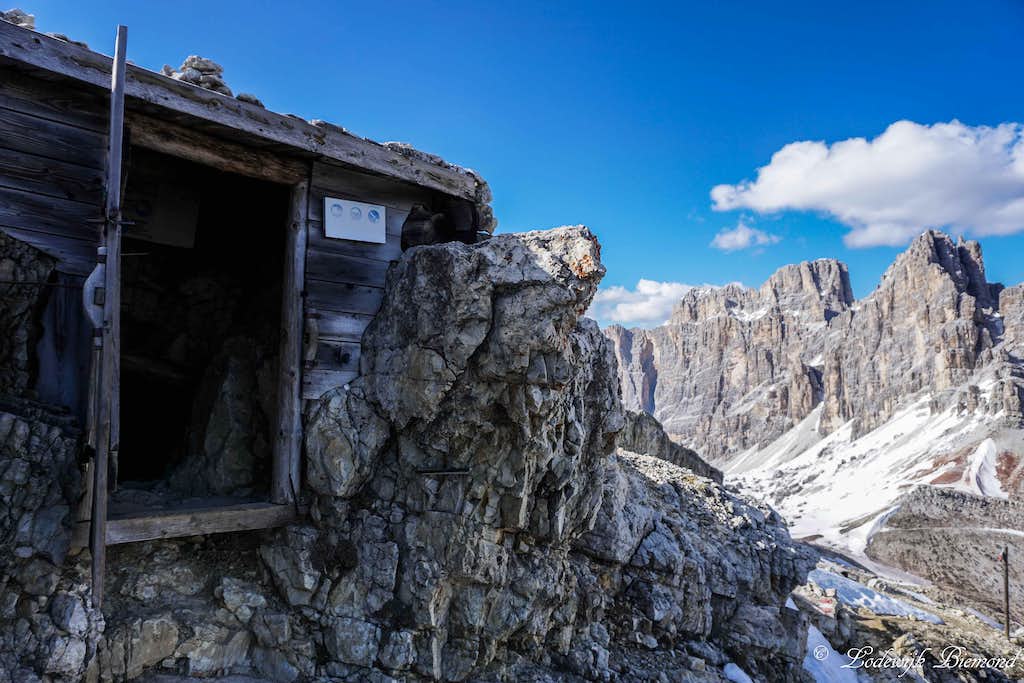 Entrance of the WWI Tunnel with Lagazuoi Grande behind
The Galleria / Tunnel Lagazuoi is a Via Ferrata to the summit of Lagazuoi Piccolo. The route is graded “A” (Austrian gradation) or “K1” (German gradation) and therefore best described as “easy”.  The route is famous of its world war I tunnel system. The route follows for a large part of the route through these tunnels. Be sure te bring a flash-/headlight since it is pitchblack inside these tunnels. You can literally see nothing without a light. Walking through the tunnels gives a bit of a feeling about how the soldiers must have felt during the first world war. But I think one can never truly grasp how hard life must have been in those dark days of the first world war. Still, so many years later, it is truly impressive to be able to walk through this immense tunnel system.The route starts at the Falzarego pass and goes up along the south Face of Lagazuoi Piccolo. It is one of two Via Ferrata routes present on the south face of Lagazuoi. The other route is the Kaiserjägersteig
Via Ferrata.
The Galleria / Tunnel Lagazuoi route can be combined with the Kaiserjägersteig Via Ferrata to create a nice roundtour. It is also possible to descend (or ascend) using the Lagazuoi cablecar, but only in summer when the cablecar is operating. The route is a combination of a hiking trail, a "true" Via Ferrata and a climb through the tunnel system inside the mountain. The world war I tunnels are the most famous asset of the route. It is really impressive just walking through them. At some points some of the spaces are recreated to show the visitor how it must have looked like during the first world war. There are still caves with guns, beds, a stove and other features. Other parts show a large rifle pointed through a tiny hole looking out of the mountain towards the Falzarego pass. These are just  a few examples, my advice is to go and see for yourself.
The route takes about 2 to 3 hours to complete starting from the Falzarego Pass and up to the summit of Lagazuoi Piccolo (or the other wat around). Most climbers choose to follow the Galleria route down the mountain so as a descend route.  The best time for climbing this route is during the summer months and the period after summer when there is no snow on the mountain. 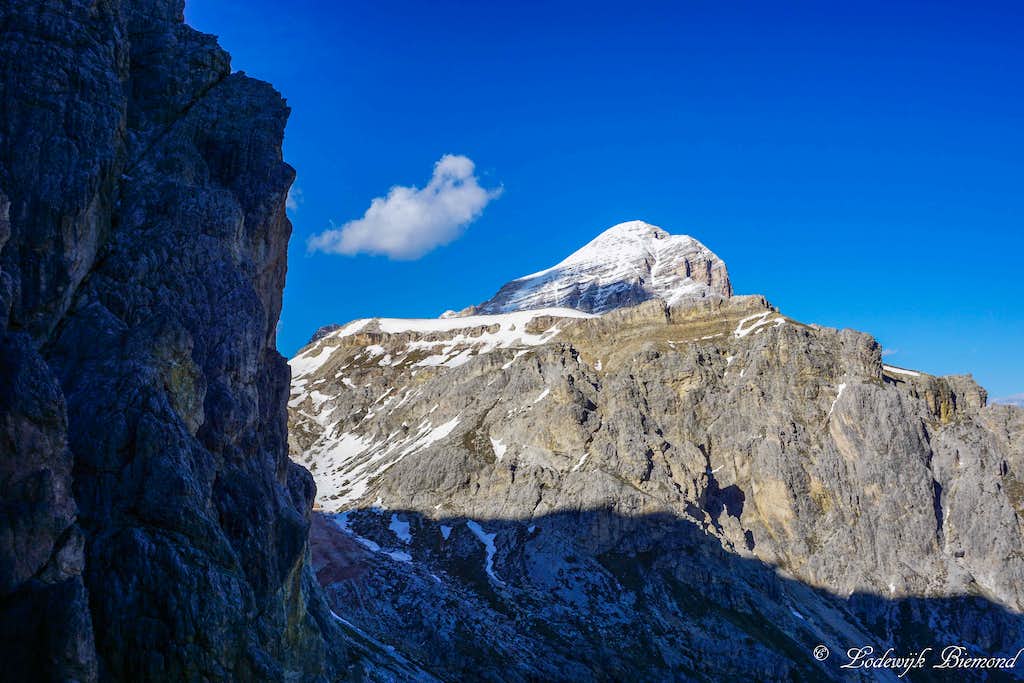 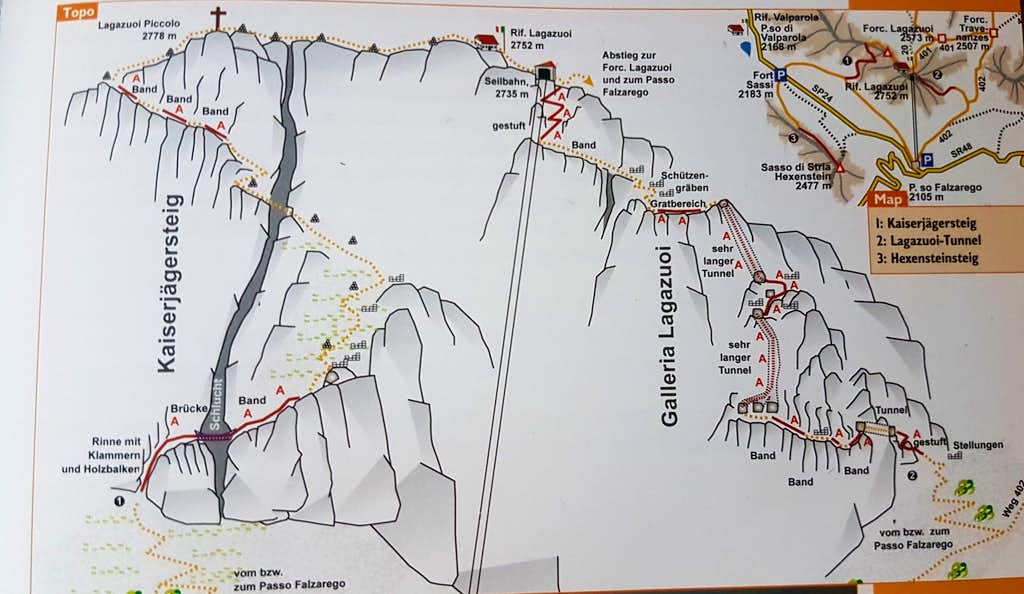 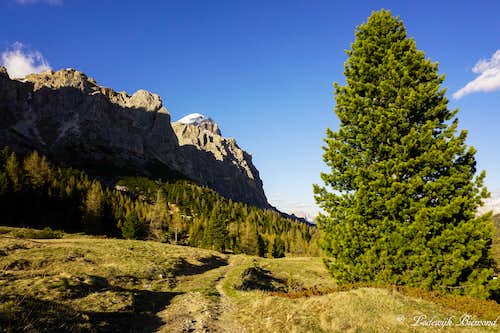 Trail 402
The route starts at the Falzarego pass and is the only trail (no. 402) heading towards the East/NE from the Pass. The trail directly crosses the line of the cableway going up the mountain. Follow the well-marked trail up, the trail is relatively flat still, up until there is a junction. At this point
you can choose to go up along trail 402 to the Forcella Travenanzes, but this is not the route to take. A sign states "Galleria / Tunnel Via Ferrata". Follow this sign and the hiking trail up in a northern direction. The trail steepens a bit here and zigzags up along the south flank of Lagazuoi Piccolo. Soon there is a second junction: taking a right brings you to the Forcella Travenanzes. Take a left and follow the trail to the start of the Via Ferrata. On multiple points on route there are signs stating "Galleria/Tunnel". These can be helpful. This first part may take up to an hour from the Falzarego pass.
The Via Ferrata starts at this point, is easy at all times (K1/A) and is partly a Via Ferrata and partly a hiking trail. Soon after a small passage secured by steel cables the first tunnel comes in sight. Be sure to get your headlight (or flashlight). Hiking through the tunnels is not too difficult. There are steps created in the steeper parts and also the steeper parts are secured by cables. The trivky part is the darkness and the fact that the rock inside the tunnel can be slippery, so watch your step at all times. A further point of attention is the directions. There are enough signs that show the right direction: follow the signs "Galleria/Tunnel Lagazuoi" and you should be OK. There are many junctions and oreintating inside a dark tunnel is tricky so use the signs in the tunnel. The route switches from hiking through a tunnel to hiking outdoors again & switches from hiking to a "true" Via Ferrata. This diversity makes the route fun. At 75% of the route you have left the tunnel system behind you and a hiking trail  (with some Ferrata parts) goes further up and on to the east ridge of Lagazuoi Piccolo. The route ends directly next to the top station of the Lagazuoi cableway and is marked by a large wooden bow stating "La galleria /Felstunnel". From this point a hiking trail goes up to the actual summit of Lagazuoi Piccolo, marked by a large wooden cross. Before the actual summit the trail also passes the Rifugio Lagazuoi (2752m). Also see the map at left for further details.

This photo overview shows the route from the mountain (top) back down to the Passo Falzarego. The starting point is next to the top station of the Lagazuoi Cableway  and can be reckognized by the wooden sign on the first photo. 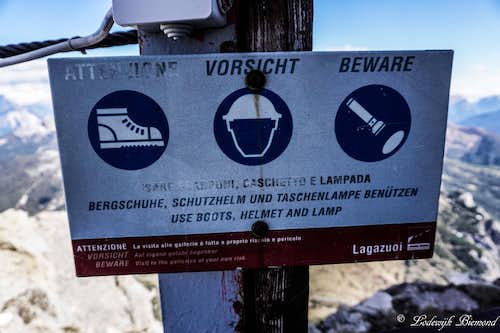 Good hiking/Via Ferrata shoes are mandatory as well as warm clothing. A Via ferrata set is also needed for Climbing this route. Also be sure to bring a headlight/flashlight for the tunnels and a helmet. 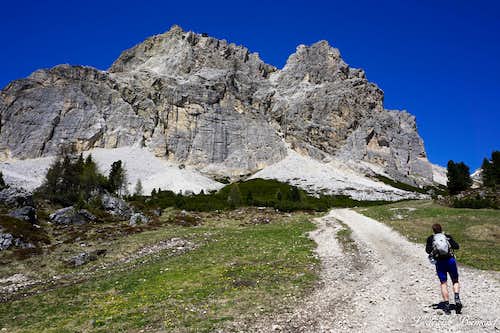 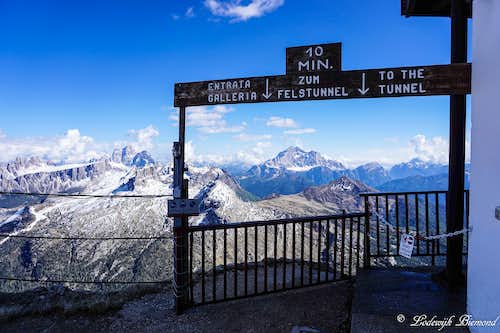 Entrance to the Galleria route
Lagazuoi can be climbed best during the summer months until fall (June / October) when there is no snow present on the mountain. Especially the Via Ferrata routes are increasingly difficult (or impossible) with snow present, so be sure to check the present conditions. 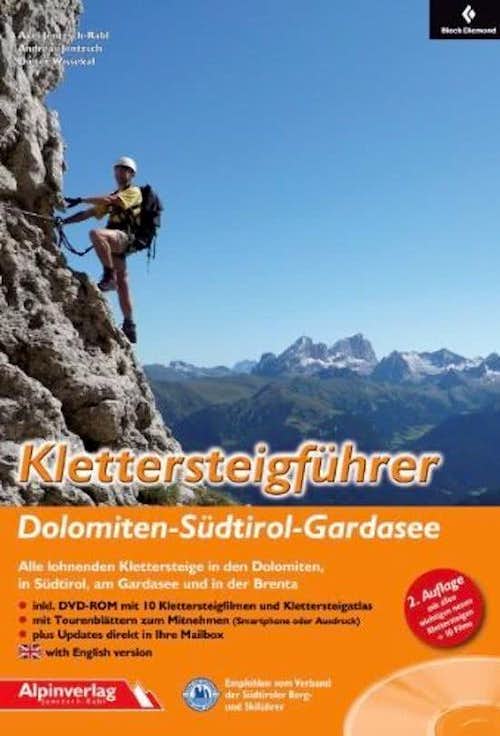