Gannett Peak, being the highest point in Wyoming, had been on my to-do-list for over ten years. I’ve talked to a number of people who have had Gannett on their to-do-lists for a similar amount of time, but haven’t done it, mostly for the same reasons. Gannett Peak is long and hard, with most trips coming in at around 50 miles round trip, and over 9,000 feet of cumulative elevation gain. That’s not to mention all the technical mountaineering gear you have to haul in to safely cross the glaciers and climb to the top. All of these challenges and more made climbing Gannett Peak a brutal experience, with some of the most amazing views you can get anywhere in the Rocky Mountains. 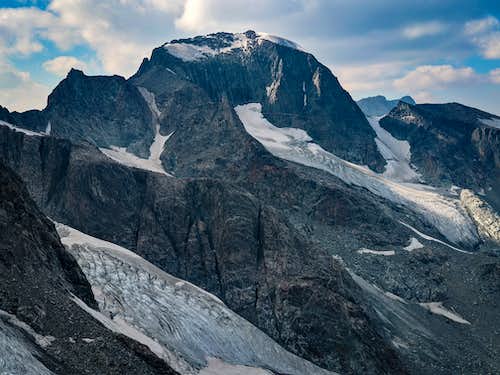 On 8/4/21, our group of nine met at the Pole Creek trailhead at 4:30PM and got on the trail, hoping to get in as many miles as possible before dark.  We managed to hike for 7 miles before setting up camp in a small valley above Hobbs Lake.  This segment of the trail gets scenic after Photographers Point, with the portion below it being scattered with toppled trees seemingly pushed over by a large wind event. Day two was the hardest day, with a 10 mile push to our base camp in Titcomb Basin. I clearly packed way too much stuff, because this day of hiking was harder than summit day for me! We started to run into trouble as we descended into Titcomb Basin, with rain starting to fall. It was dumping on us by the time we were passing the second lake, and we quickly abandoned our plans to camp up under Bonnie Pass, and set up near the end of the lake. Conditions further worsened and I got a weather update on my inreach that forecasted storms and even snow throughout the night in higher elevations, with the following day being bad as well. We were going to start our climb at 2am, but this new weather report made it clear that it wasn’t going to happen. Luckily, many of us had the flexibility to stay out an extra day, so we decided to have a rest day the following day. Three of our group without that flexibility had to hike out the next day. 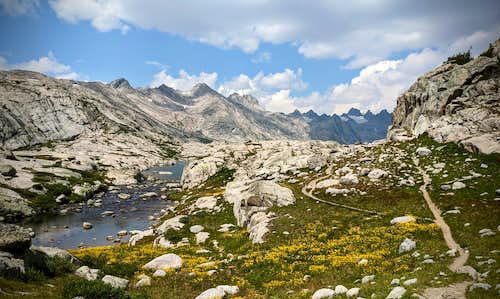 After a night of horrible storms and little sleep, we woke up to see fresh snow on Bonnie Pass, and used a weather window to go practice self-arresting with ice axes up on a nearby snowfield. It was cold all day long with periodic thunderstorms and plenty of boredom as we waited for our 2AM start time. The weather cleared up right before we woke up at 2AM, and we set off for Bonnie Pass. Using Titcomb Basin to get to Gannett is appealing because of the scenic approach and shorter total mileage when compared to the Glacier trail approach. However, the main drawback of our route was having to climb 2000 feet up Bonnie Pass, only to lose 1000 feet of elevation on the other side while approaching the peak. This might not seem that bad when compared to the 10 extra miles you’d have to hike on the glacier trail to avoid the pass, but climbing up the pass was definitely the hardest part of the day. 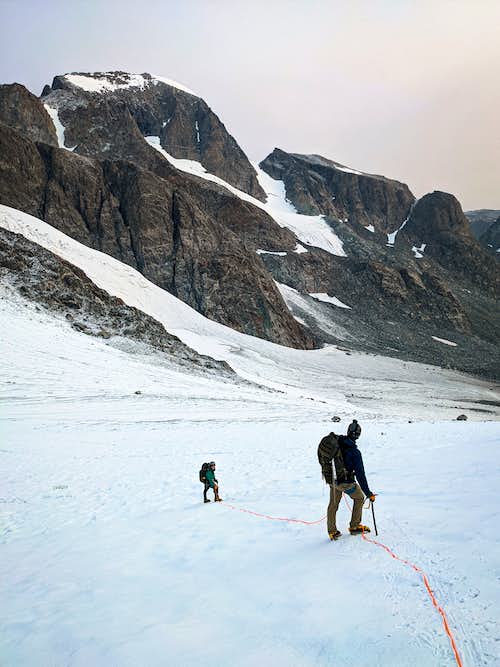 Fresh snow and ice coating the rocks made the climb up the steep pass even more difficult. It took us three hours to get from our camp to the top of Bonnie Pass, where we could finally see Gannett Peak in front of us. Three members of our group got discouraged by the cold, and the distance of the peak from us and decided to turn back before dropping down onto the glacier, leaving three of us to make the summit attempt. As I descended down to the Dinwoody Glacier with Maddi and Calder, I noticed that there were many open crevasses on the glacier between us and Gannett. This surprised me because most trip reports I had read didn’t mention any crevasses or roping up on the Dinwoody Glacier. We roped up at the bottom after putting on crampons, and immediately were happy with our decision to bring a rope due to the many crevasses we had to hop over and walk around. There was plenty of opportunity to fall in hidden crevasses, and we even heard an account from a returning group of someone falling into one up to their chest! 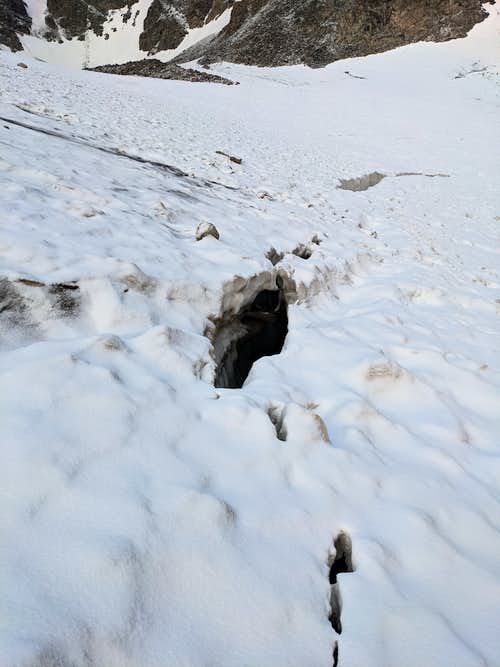 Descending the Dinwoody Glacier was a highlight for all of us due to its beauty and impressive ice features. We saw multiple deep moulins and an ice slot canyon further down on the glacier. The previous day’s snow only comprised a thin layer, and the surface of the glacier was down to solid ice, which made me glad I had brought ice screws. We took our crampons off near the start of the uphill to the Gooseneck Glacier and scrambled up to the glacier without having to put them on again. We geared up and headed out onto the glacier without roping up because we didn’t want one person slipping on the steep snow slope above the bergschrund pulling everyone else down. The guided groups we observed that day also did not rope up on the glacier under the bergschrund, though Calder and I both broke our trekking poles into small hidden crevasses while making our way to the bergschrund. 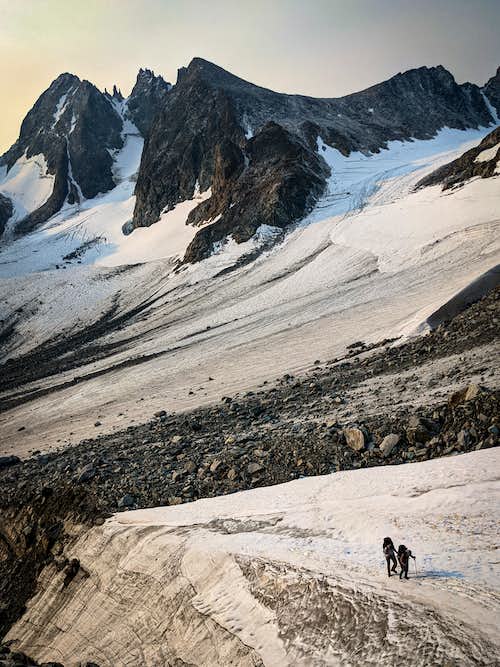 The bergschrund itself didn’t look bad at all, with the bottom crevasse mostly still covered, and the top one filled in with the surface safe to walk on. The problem with the bergschrund was the steep slope above it. The initial move coming out of bergschrund was a lower angle overhang with nothing but solid ice to get a grip on. Calder was belaying me on lead, and I was able to place an ice screw to help protect the move. I found the slope above the bergschrund to be either ice or a few inch thick layer of slushy snow on ice, which made for very sketchy climbing with only one ice axe. Ice screws were the only thing I could use to build an anchor for a top belay, and luckily everyone was able to make it over the hump onto the slope. The steep slope above the bergschrund was very insecure, making me wish I had two good curved ice axes, rather than my single straight one. 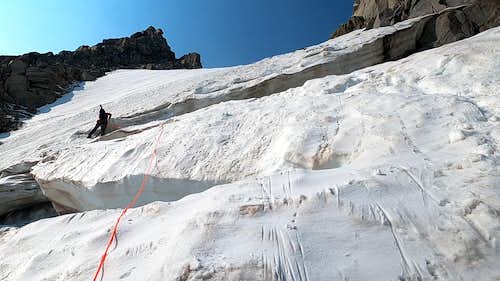 After reaching the rocks at the top of the chute, we left some gear before starting up the ridge to the summit. During the scramble up to the summit, we didn’t run into anything that would have required crampons, ropes or other technical gear. From the top of the chute to the summit, it only took us about 50 minutes. Reaching the summit, we were greeted by thick wildfire smoke that had moved in, obscuring much of the distant views. However, all of the surrounding glaciers were visible, and made for an incredible summit view. The largest glaciers in the U.S. Rocky Mountains are visible from the summit, including the Gannett Glacier (the largest), which looked like something straight out of Alaska! Small clouds started to pass right above the summit, so we didn’t spend much time at all up there, fearing the quick formation of afternoon thunderstorms like I had previously witnessed on the summit of the Grand Teton. 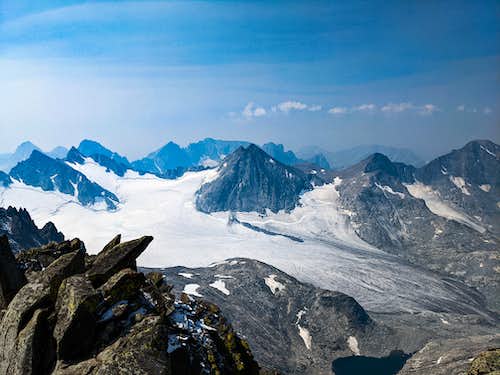 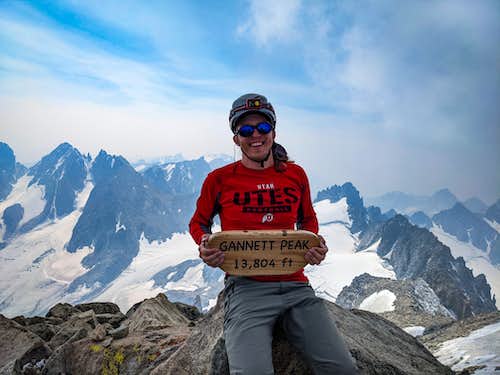 The weather luckily held out for us as we quickly descended back down towards the Gooseneck Glacier. Downclimbing the icy slope through the Bergschrund was not going to be an option due to how icy it was, so I scouted out a rappel route down the rocks on the skiers left of the Bergschrund. This rappel route had pre-existing anchors for the most part and could be down-climbed/up-climbed without a rope or gear by anyone comfortable with low 5th class climbing who wants to avoid the steep, icy slope. It was a relief getting back down below the bergschrund, because it signaled an end of the sketchiest part of the mountain. Our descent back down onto the Dinwoody Glacier was relatively uneventful, though the smoke cleared out some, revealing how the surface of the glacier had changed in appearance since that morning. Many more crevasses were visible now that things had warmed up and the previous day’s snow had melted off somewhat. 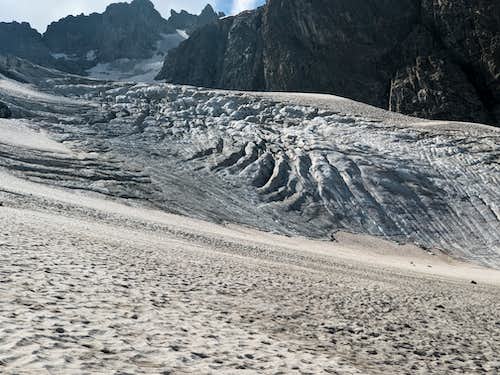 As we hiked back up the glacier towards Bonnie Pass, we deviated our path slightly and Maddi fell hip deep into a hidden crevasse as we tried to get around a large section of crevasses. She was able to get herself out just fine and we roped up for a rescue if needed, but it was still an unnerving experience. As we neared the edge of the glacier, we were forced to cross a snow bridge over a very large crevasse without a discernible bottom, though the bridge seemed to be very solid. Starting at the end of the glacier, I went ahead of the group and climbed up and over Bonnie Pass, running down the other side. Bonnie pass really was the hardest part of the day, which makes the Glacier Trail appealing to me in the future. I made it down to our base camp near the lake, and recorded that it had been 15 hours and 45 minutes since we had left camp that morning for our summit bid. 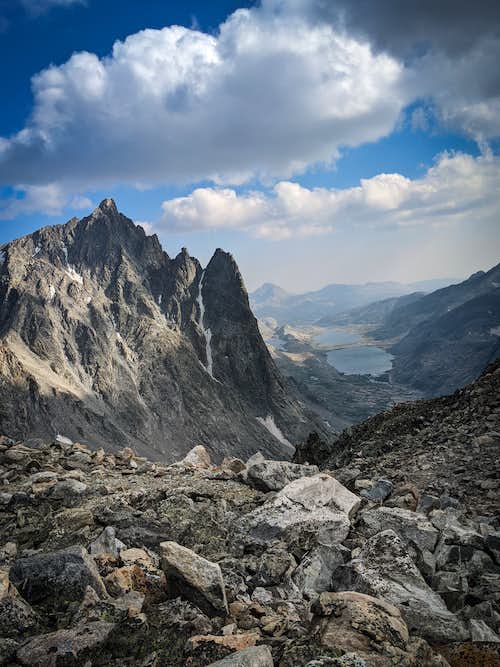 After Calder and Maddi arrived in camp, the six of us remaining immediately packed up and attempted to get to Island Lake that night so that our hike out day wouldn’t be as brutal. Backpacking 4 miles after a long summit day was horrendous, and I struggled to make it to camp at Island Lake, but was glad I had the next day. The 13 or so miles from Island Lake to the trailhead went by relatively fast for me, though every pass between basins reminded me how beat up my body had become over those 5 days. After successfully reaching our cars and getting food, I already had decided that I’d return in the future to do the peak again. The summit day itself was tons of fun, Bonnie Pass excluded, with enough mixed terrain to keep things very exciting and scenic the whole time. I might consider the Glacier Trail in the future to avoid Bonnie Pass, or hire a mule team to take our packs in and out for a more enjoyable experience that focuses more on the peak. I can see why so many people hold off on doing the peak; it takes a lot of effort to pull it off. However, it is a must do for any mountaineer in the West. 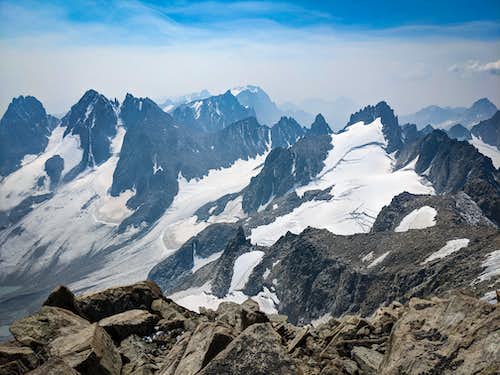