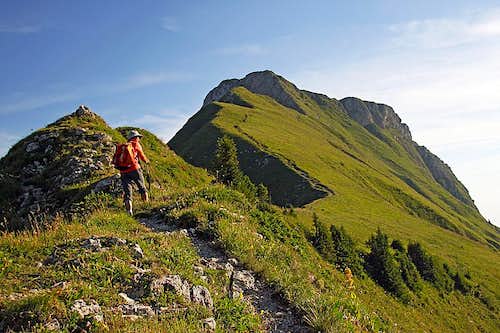 Gantrisch is a nice, sharp summit in Fribourg Alps, which gave its name to a whole smaller area around it. It is a very nice, panoramic hiking goal, recently they built on its eastern ridge also a difficult, modern ferrata. Touristically the whole area is well developed (no big crowds there though), but what is also nice is, that all farms and alpine pastures are also in the operational mode. Hiking trails are well marked and maintained (equipped with inscription plates), at least those official ones, while some summits are harder to reach and are mostly untouched by hikers. Depending on a trailhead you can do on Gantrisch a nice round tour.

Fribourg Alps belong to many areas of Pre-Alps which are encircling the Western Alps. The area is mostly hilly, but in the SE part there are many nice, sharp summits, exceeding 2000 m of altitude. They are built of sedimentary rocks. Due to low altitudes all those mountains are quite overgrown by grass till their summits, exceptions are of course sheer rock faces. And if you arrive in a proper time the slopes on those mountains are abundant with all kinds of flowers. The mountain is rising on the main mountain crest, between the saddles of Leiterepass, 1905 m, on the east, and Morgetepass, 1958 m, on the southwest. The eastern ridge is short and very steep - that's the one which is hosting the ferrata. The southwestern ridge is longer and by it the normal ascent goes. East of Morgetepass, towards Gantrisch, there is a small grassy elevation in this ridge, called Schibespitz, 2060 m. And then there is also the sharp (on the upper part) and long northern ridge, so beautifully seen from the trailhead. The neighbouring mountains are of quite similar elevation. On the east is the sharp and wild Nueneneflue, 2102 m, on the west Buergle, 2165 m, with its attractive outcrop of Chummlispitz, 2026 m, on the northeast. 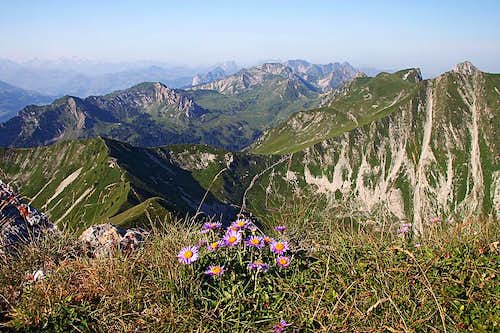 Wiews from the summit are great. Already a bit remote, but Gantrisch still offers a great view on the 4000-ers of Bernese Alps and their glaciers. We distinguish all the important ones and from behind that group other giants of Alps can be seen. Nice is also the more close world of Fribourg Alps. Among the sharp summits Stockhorn on the east first catches our eyes. The nearby Nueneneflue and Buergle are also nice and on the west we see some more summits of approximately the same altitude. The world towards the north is then mostly hilly.

The higher elevation hiking areas around Gantrisch are mostly reached from the north, where a good road goes over a 1584 m high saddle, called Wasserscheidi. From Fribourg you would drive towards the SE, after reaching Plaffein, continue in the same direction and then towards the E by the valley of Kalte Sense creek. From the other side, from the north, the saddle is reached from the town of Riggisberg, between Thun and Bern. Just above the road pass there are two big parking places, built not so much for summer season but for winter, when close to the pass there is the upper station of a chair lift.

On the southern side of Gantrisch mountain chain there is Untere Simmental. But it looks that from this low valley the roads are not reaching high on the mountain and also the network of marked paths is much less dense there. I have no good information where to you would best drive there in order to make a tour on Gantrisch. Still, in the meadow of Chessel, 1824 m, just south of the mountain, in August there was a herd of cattle, so locals seasonally do live there. 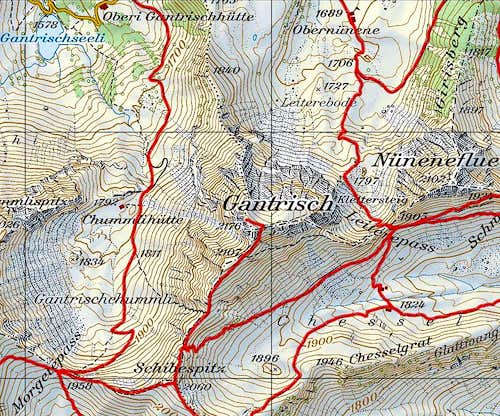 On the N trailhead

The summit ascent starts on a small saddle between Schibespitz and Gantrisch, 2020 m. So, the hike up sections are the following:

2.a. This route can be shortened by a shortcut, which goes over steep grassy slopes. From Leiterepass (1905 m) we go directly up, crossing the southern slopes. The trail reaches the SW ridge on 2107 m. There we turn right and go on top.

3. From the south. From Weissenburgberg (989 m) we go north on Chessel alpine meadow and from there on the SW ridge. Until the saddle on the SW ridge (2020 m) all paths are easy and well beaten (by Swiss Hiking Scale T1/T2). The upper part of the SW ridge (last 50 meters) is more difficult. The path is narrow, a bit exposed and the terrain is rocky. There is a steel cable to help over that place. Difficulty: T3.

The eastern ferrata on Gantrisch was built in 2007. The entry is on 1890 m. Its difficulty is rated by K4+ (difficult) and requires a ferrata set. If you don't have it, it can be rented in Gurnigel hut.

The ascent on Gantrisch is a half day tour, so mountain huts are not needed for it. But in the vicinity there are some huts. The most convenient looks Underi (Lower) Gantrischuette, 1510 m, standing by the main road which goes over the pass. A mountain hut is also Berghaus Gurnigel, 1579 m, close to the road pass. And on the nearby alpine pastures you have a few private huts where you possibly can get also food and drinks.

No special restrictions in the area. Mountain roads are closed for public traffic.

The best time to ascend Gantrisch is in snow-free months, approximately between June and November. The summit slopes are very steep and if slippery, even the normal ascent can become dangerous. Due to the S and SW orientation, the normal route can be in good conditions also done in winter and spring, but for that a full winter equipment is recommended.

This is a photo-gallery of the climb by the via ferrata. (click the photo):