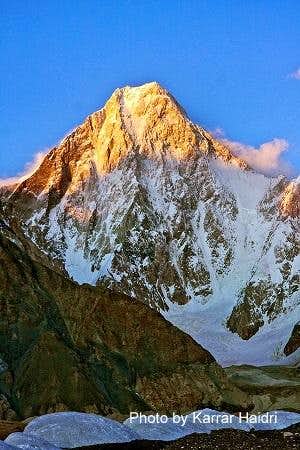 The Gasherbrum-IV, the stunning pyramid is the most awe-inspiring mountain in the Gasherbrum group. The traditional route to its base camp goes from Skardu. A jeep able trek from Skardu to Askole reducing the reaching time to Gasherbrum-IV base camp. An Italian expedition team led by Mr. Riccardo Cassin along with Walter Bonnati, Carlo Maurimade the first ascent on 6th August 1958. These mountaineers could arguably be described as the most talented Italian Alpinists of their era. Due to snowstorm, they spent the whole night at camp-6 and day after they came down to camp-5 (7193-M) through an extremely hazardous route.
« PREV NEXT »

Re: My best compliments Karrar,

Thank you for your Nice comments.I'm glad you enjoyed your visit.
Greetings from Pakistan.

What a photo of an incredible mountain!

Thanks TimB for visiting my page and recording your appreciation.