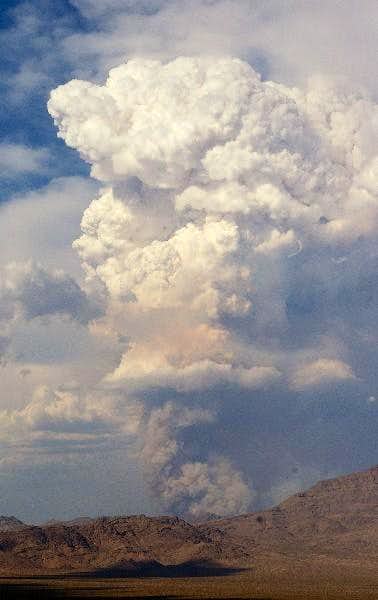 The Gass Fire over the Sheep Range, Desert National Wildlife Refuge. The fire burned so hot it drew in a monsoon storm to itself. The smoke rose straight up until they collided whith the monsoon storm clouds and both the smoke and storms cloud flattened against each other as can be witnessed in this image. I've never seen anything like it before. Photo taken as I was driving off Mt Charleston after a hike. Mohave Desert, Las Vegas NV.
« PREV NEXT »

Excellent work. By calling it the Gass fire I'm wondering how much damage it did. I have the Gass Peak page here at SP and I really enjoy that area.

I don't know how much damage it did but it was a named fire. Odd, I was riding motorcycles on North Shore with friends when we saw the lightning hit. A couple hours later we were at an outdoor diner in Henderson and could see that a fire had indeed started. This picture was taken a week later. This was the monsoon season of '06.

I remember that year...

There were a lot of similiar wildfires
here in Arizona, and some people were
evacuated in central Arizona. There was
one that burned Wilson Mountain in Oak
Creek Canyon. I hope 2008 won't be so
bad, with all the rain/snow we've been
getting. Great photograph!!!
Does this thing ever happen to you
people there in Nevada?
PLEASE click.