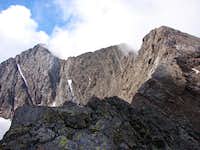 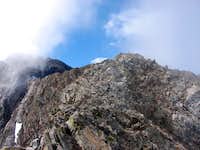 Posets and Gemelos
Posets has two important peaks at North joined by the Brecha carrivé. Both peaks were climbed and known for the mountaineers but they didn't have name before the list of peaks of three-thousand meters of the Pyrenees. The names chosen were Pico de los Veteranos (3,125m ) and Pico de los Gemelos Ravier (3,160m).

The normal route of Pico de los Gemelos (3,160m) cross the summit of Pico de los Veteranos (3,125m) and I wrote only one route for both peaks including the full information to climb but I think that both are mains peaks according with the list of UIAA.

Who were (are) frères Ravier?

Gemelos means twin brothers (frères in French) and it’s a name in honour to Jean and Pierre Ravier. Both Ravier were famous rock-climbers in the middle of XXth century. They opnened a lof of new routes of rock-climbing in Pyrenees. They are still alive climbing!!!!

Because my English is not very good I tried translating a text in French for you, it's the back-cover of the book "jean et pierre ravier
60 ans de pyrénéisme":

Brothers twins born in 1933, Jean and Pierr Ravier form the emblematic roped party of the pyrénéisme of the twentieth century. Self-taught to dazzling apprenticeship, they opened the climbing ways the most famous one of the big massive one Pyrenean, Dihedral Northeast of the Big Aiguille of Ansabère to the Dihedral Yellow one Face North of the Vignemale, Pillar of the Embarradère of the Ossau to the Face South of the Tozal del Mallo in Aragon. As much of "first" among several hundreds, swarmed on all the massive ones, even the done more lose, French and Pyrenees Spanish.

Total absence of training, mistake equipment, refusal of the methods: the genius of the brothers Ravier lies in a very personal conception of the mountain, based before all on friendship.

You have two normal routes always crossing Puerto de Chistau, from Viados (11km of forest track from San Juan de Plan) or from Estós (2h of walk from the road of Benasque).

The peak is in the Natural Park of Posets-Maladeta with rules about wildlife, camping,...

Viados:
-Refuge Tabernes (free), with the same access across the forest track, in the last crosstrack accessing to Viados.
-Refugio de Viadós (private), reservation is advisable before driving the forest track.

pyrenees-passion.info: a list of the first of twin brothers Ravier (French).

A very special film about twin brothers Ravier (in French):