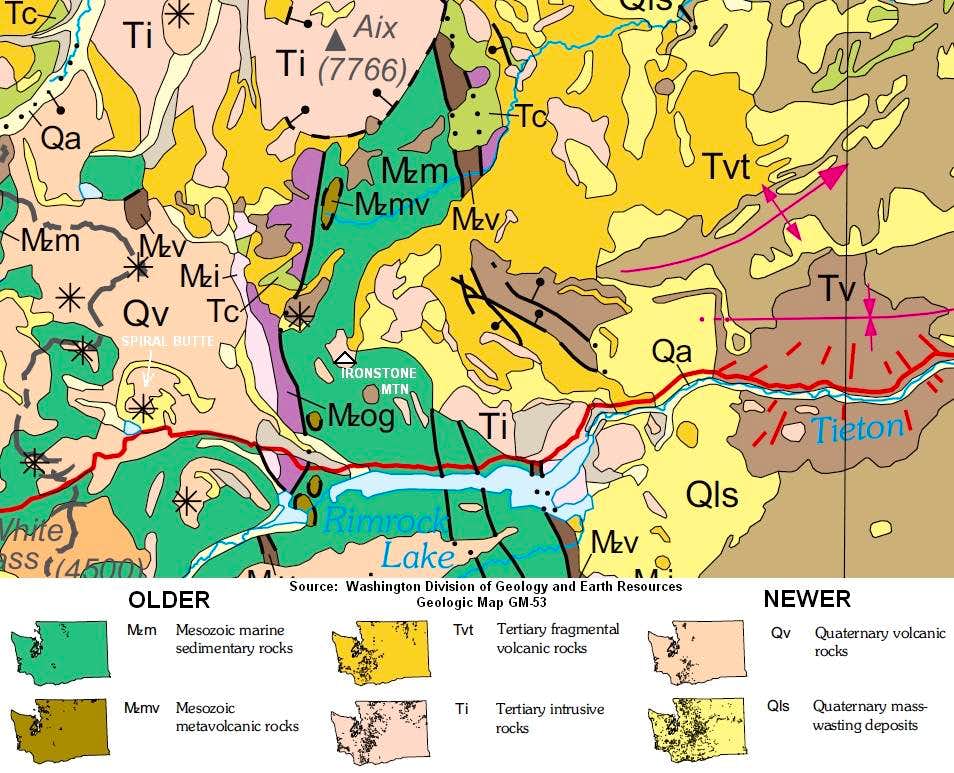 It has been suggested that Ironstone Mountain is named after the sedimentary rock ironstone. This is plausible. However, there was a columnar basalt rock outcrop near the summit at 6400 ft up (see this picture). That's pretty high in elevation for columnar basalt but not unheard of. So I checked the geologic map of Washington (WARNING: large PDF file to download so don't click this unless you have time to wait: http://ngmdb.usgs.gov/Info/dmt/docs/schuster07b.pdf) and took an excerpt of the Ironstone Mountain locale. Where I have marked the summit of Ironstone is my best guess. This would put the summit in a Tertiary intrusive rock formation. But columnar basalt is an extrusive rock. So I don't know. I will say I've never heard of a sedimentary rock having a vertical, columnar orientation such as shown in the photo, so if it is ironstone that's interesting.
« PREV NEXT »

Perhaps Ironstone Mountain is similar to Devils Tower (Wyoming). Devils Tower is an example of igneous intrusive rock that has become exposed after sedimentary rock eroded away over millions of years.
Perhaps similarly, this type of occurrence happened at Ironstone Mountain. We witnessed the basalt-like columns on the south slopes which, according to this diagram, would be at/near the point of sedimentary rocks... and ironstone is a sedimentary rock. We might have witnessed basalt-like columns at the point of erosion, and/or the border between igneous intrusive and sedimentary? Both ironstone and basalt there could be full of iron-rich olivine, which would explain the coloration shown in the photo.