The summit - lost in fog
South of big mountain groups of the Northern Limestone Alps (like Berchtesgaden Alps, Tennengebirge and Dachstein massif), and north of the ranges of the Central Alps (Hohe and Niedere Tauern) stretches a range of humble mountains wich only hardly reach over 2000 meters of altitude. This group is unfortunate in a sense that scholars even don't agree if to include it to the Central Alps (which they are not in many respect) or to the Northern Limestone Alps (which they are also not by their rock structure). They are called The Salzburg Slate Alps and also here on SummitPost we have them in the structure of Eastern Alps - however until now still without their own SP page. Half of the Salzburg Slate Alps stretch west of the Salzach river knee. These are the Dienten Mountains. The other half consists of several smaller subgroups, also shown on the image here: Hochgruendeck, Rossbrand, Gerzkopf and some even less significant, small groups east of Rossbrand towards Schladming (not seen on this map). So, Gerkopf, to which this page is devoted, is a small massif on the very northeast of Salzburg Slate Alps, between the limestone groups of Tennengebirge and Dachstein. 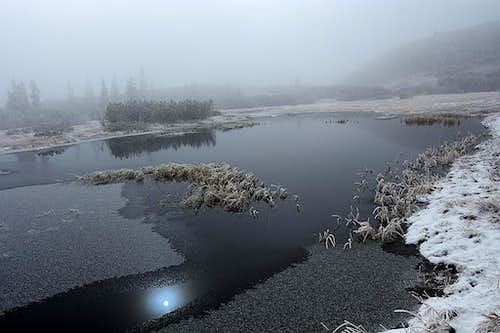 Schwarze Lacke (Black Lake)
As other subgroups of the Salzburg Slate Alps, also Gerzkopf is forrested almost to its top. It offers some nice hiking, in winter some skiing and that's already more or less all. Well, two more interesting features are still worth mentioning. The first one is nice view on the surrounding, more spectacular mountains. The other one is nice, still preserved nature, including a small marsh, even lake area around the very top, which is due to its natural treasures proclaimed a natural reserve. These altogether are already good enough reasons that Gerzkopf is fairly popular with hikers. The geographical structure of the small Gerzkopf group is simple. From all sides quite gentle, forrested ridges rise up to the summit. There a kind of summit ridge is formed, which then descends slowly towards the northeast, where on the Langeggsattel, 1313 m, Gerzkopf is bordering on the limestome mountains of Bischofsmuetze.

Towards Dachstein
Oh, what can I write here, as my only experience with the Gerzkopf panorama is a hopelessly dense fog. But pictures from the web are convincing - from the summit you can indeed enjoy a pleasant view on the massifs of Dachstein (especially on the Gosaukamm with Bischofsmuetze), on Tennengebirge and also towards the Central Alps. All these reflecting in small ponds of the natural reserve area. See a few examples here. 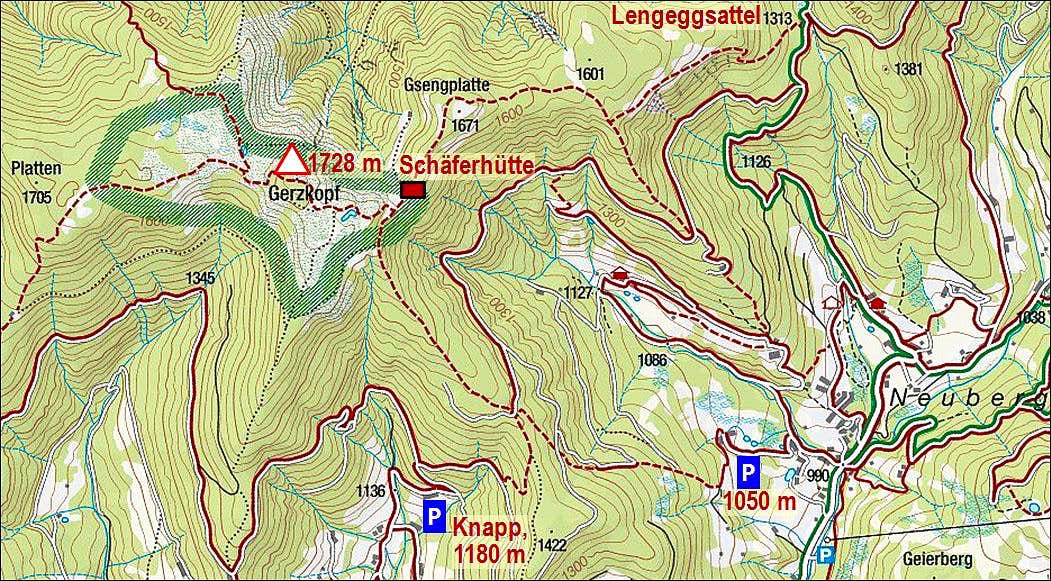 Gerzkopf can be reached from almost all sides, but the two villages with most popular trailheads are St. Martin, 949 m, on the west and Neuberg, 990 m, on the east. They can be both quickly reached from near Eben, which lies on the highway Villach-Salzburg. You can start the hike either down in villages, or a bit higher, at some more remote farms. The third option is driving on the mountain from the south, from Schattbach. You can reach Knapp (miners' houses) on some good 1180 m. And finally, you can even drive on the northern side, from Neubach to the parking place on some 950 m. Online maps: > http://www.austrianmap.at > http://www.kompass.de/touren-und-regionen/wanderkarte/

All routes on Gerzkopf are well marked and easy (T2). From all trailheads there's not much altitude to overcome, but as you must also do some distance, best count with 3 hours hikes from the two villages and 2 h 30 min hikes from higher trailheads. As paths are easy, you can also be much faster. For a start, I'll briefly describe only the SE ascent. If you can contribute others, that will be much appreciated. 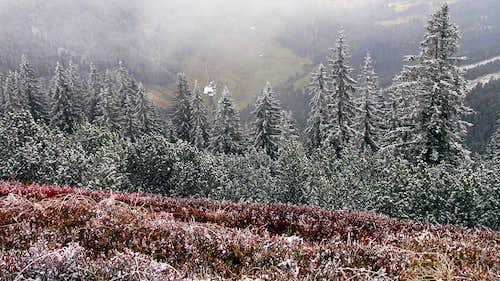 On a nice, foggy hike...
Driving from the south towards Neuberg, you notice already on the main road inscriptions, announcing a 3 h walk on Gerzkopf. On the first crossroad (990 m) you can however still drive left up, keep on the next crossroads left and finally park below the last farm on that road (some 1050 m). The marked path passes the farm and continues by the road above it towards the left (southwards). When reaching the alpine meadow, marks lead us right from the road, into the woods. Nice, well beaten path then crosses the slopes towards the NW and W. It also several time crosses forrest roads, until reaching the broad SE ridge of Gerzkopf. There the road goes around the ridge, but we continue by the ridge towards the NW. The forrest there is incredibly beautiful, but views open a bit only on few places. On some 1600 m you slowly reach the upper timber line. The path turns a bit right, but on the alpine meadow, just before Schaeferhuette, 1608 m, it deters left again. Through dwarf pines we ascend some good 50 m and reach a small plane with Schwarze Lacken (Black Lakes). That's a nice biotope, which we pass on the northern side, ascend through dwarf pines a bit further towards the W and NW and soon reach the big summit cross and the bell.

On the meadow east of the summit there is the Schaeferhuette, 1608 m. On the mountain once big herds of sheep were kept. It is said that even the big bell on the summit was used to gather some 400 animals. Today the hut offers is summer also some food and drink to hikers.

As shown on the map, the upper part of Gerzkopf is a protected nature reserve. Various types of moorland host rare, characteristic fauna and flora. The biggest pond is called Schwarze Lacke (Black Lake), for which the legend says that since a distant past even a golden charriot has been sunken.

We can go on Gerzkopf in any season. Winter ascents are also not difficult, but in deep snow they would require tour skis or snow shoes. Forrests are not very dense, so also skiing down is possible (we can keep also to the mountain roads).