Getting Back Into the Swing of Things: Triple Couloirs Car to Car
Washington, United States, North America

Getting Back Into the Swing of Things: Triple Couloirs Car to Car


Due to serious head aches, pain, and getting busy I haven't written a climbing report in a long time. Fortunately things have gotten better, been working out, going on 5 mile runs, eating healthier, losing weight, becoming a lightweight-aholic (gear wise), and am back on the road to alpinism. January Will and I climbed the North Buttress Couloir of Colchuck as a starter kit for the year. Avalanches, bad weather, sickness, and extreme pain had it's vengeance February through April. Rather than throwing my hands up I kept training, stayed motivated, and sought after the opportune moment to get my first multi pitch ice lead in. Triple Couloirs has been on my to do list for a long time, definitely a great route. With 6840 feet of gain, 20 miles, 18.5 hours of hiking & climbing, 4 pitches, and a lot of kicking in steps it made for a good work out. 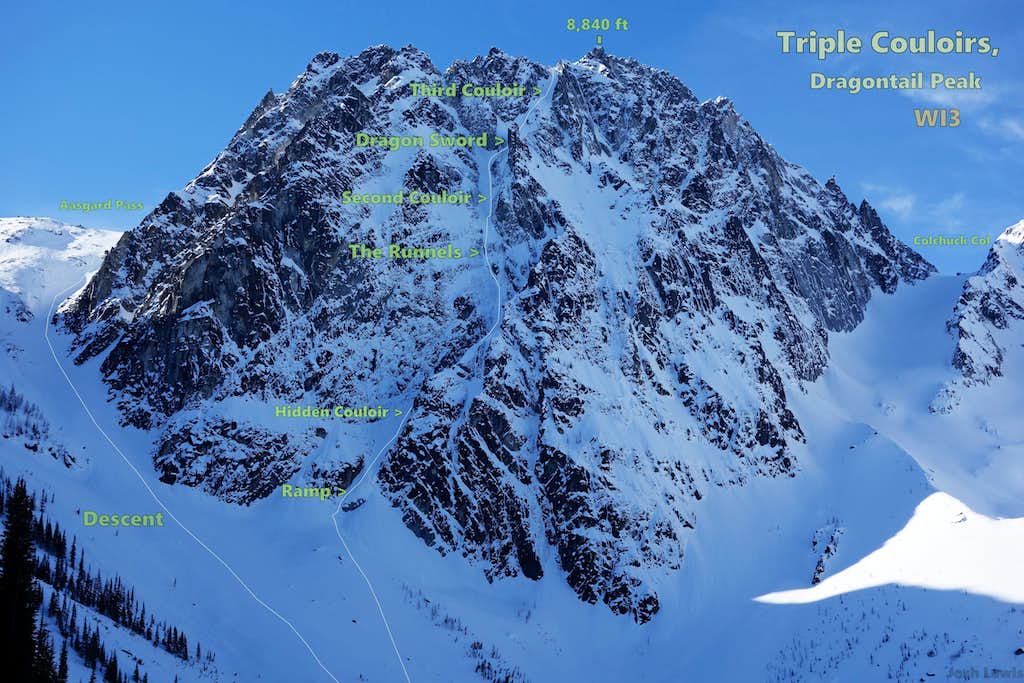 Triple Couloirs Diagram
We woke up at 4:15 a.m. and were hiking up the 4 mile road by 4:45 a.m. There wasn't snow until the last 1/3 mile. As others have mentioned the trail is completely solid making the hike to Colchuck Lake luxurious. After the second creek crossing shortly beyond the Stuart Lake junction we re-filled our water. Making excellent time walking across the lake, felt refreshing to have the entire place to ourselves. At the base of the route we put on our harnesses, crampons, and ice tools. I was extremely pleased that the route was in. 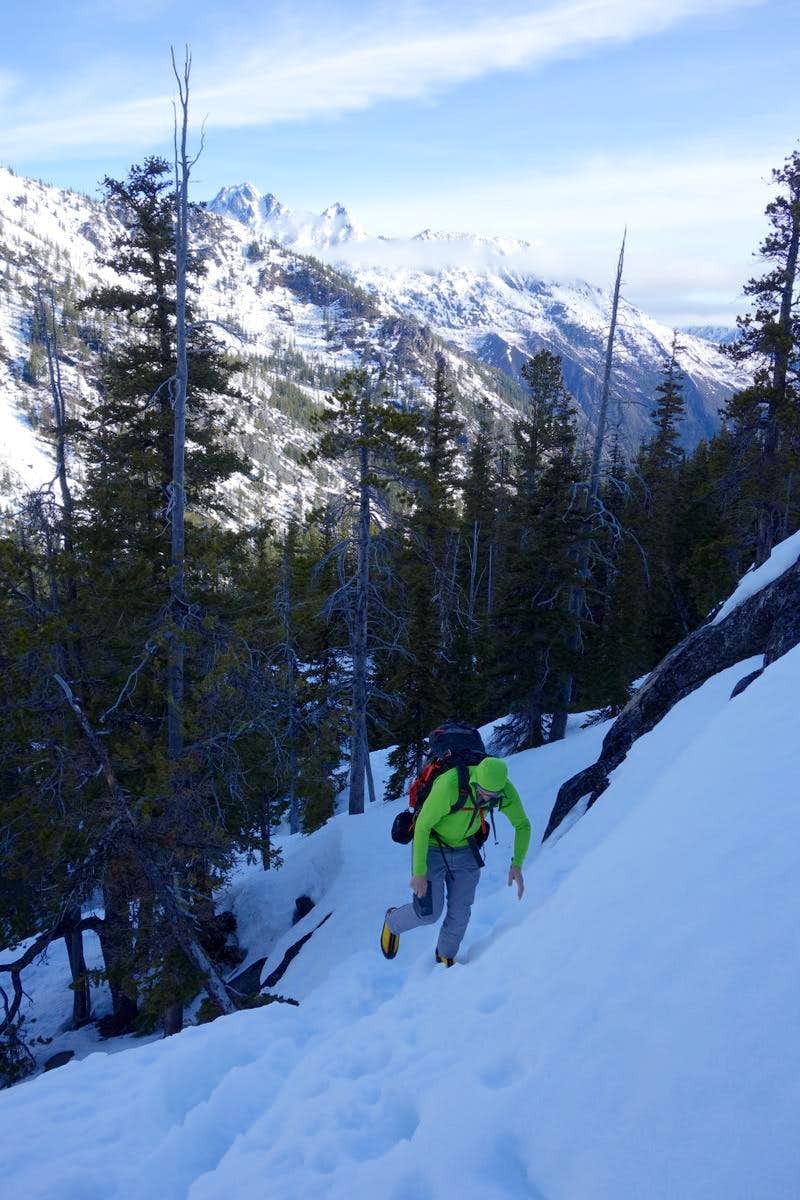 Hiking up to Colchuck Lake


The ramp had alright snow conditions, some ice/snice, with occasional tool placement failures due to soft snow. Inside the first couloir the snow climbing felt cozier while having dazzling theatrics above. At the top of the couloir we enter the Runnels which is when things started spicining up. It was the beginning of the ominous sound track the mountains play as the day progresses. Ice chunks coming down, loud humming of snow/rock chunks, and small doses of spin drift. I dug a small ledge just wide enough to setup a belay. As Thatcher setup the anchor, I did an alpine dance to regain feeling into my toes and fingers.

The first pitch went well, was able to get a nut in the wall followed by two snow pickets for the anchor. The second pitch is when things got more exciting, was torn between which runnel to climb. I choose the one on the right, the left one was probably better. The ice was thin in a few places and sloppy in others. Fortunately was able to find a spot that would accept a screw. After climbing another 50 feet higher I looked around for another potential protection placement, non could be found. The crux was a little tricky due to softening snow, ice tool placements were iffy at times making it essential to kick in good steps. "Impeccable timing" I sigh to myself as my legs cramp up. After taking a few deep breathes I carefully climb over the crux. As the rope length ran out I desperately looked around for a place to setup a belay. Every ice screw placement either hit rock or broke due to loose snow. Seeing that I was out of options I used a last resort move which was to bury my ice tools and compress the snow around it. After stress loading it and giving it hard pulls, the anchor seemed strong enough to hold a non lead fall. For further protection my legs were anchored in so that I could bear some of the weight as a precaution.

Thatcher made it up the pitch in good time, he took the lead for the second couloir which we simul climbed. Felt amazing to follow steps in such an exciting environment and be head ache free. As the snow softened more we heard the roar of a small avalanche on the mountain adjacent to us. Seeing that it was getting late I took the lead up the third couloir past the Aasgardian Gendarme. As we topped out I could see weather was coming in. The traverse to the summit was mellow, albeit I had to watch out for the cornice near the summit.


Out of food, water, and time we didn't spend long on the summit. Looking below I could see our descent route had nasty cornices making for a potentially precarious descent. As we near the Dragon Col I start picking up the vibe that a potentially deadly cornice is blocking the route. Luckily there was a slightly steep escape ramp that bypassed the standard route making for an easy descent down to Enchantment's basin. Was able to get a few glissades in around Aasgard Pass. At Colchuck Lake we could see that significant melting had occurred, near the end of the lake our foot prints were already submerged in water. Thatcher discovered that we could refill our bottles from the lake itself which was very exciting news for our parched lips.

Cross the lake at first was iffy. Our steps sank further in to the point of soaking my boots with blue water. After becoming unreasonable I announce "I'm out". While walking along the shore we found that the western shore was more solid, making it a viable option for crossing. Keeping a fair distance from each other we walked across the lake. After getting off the lake we hiked down the icy and slushy trail in evening light. Was interested to see it transition rapidly back and forth. Just beyond the trailhead Thatcher put on his approach shoes while I walked down in my mob buckets. Needless to say we were extremely pleased to arrive at the car.

Gear notes:
.3 - 2" cams
Rack of nuts came in handy
3 pickets would have been better than 2
Flotation not needed
Don't let the sun see you without protection. I got sizzle faced from only 1 hour of sunlight

View Getting Back Into the Swing of Things: Triple Couloirs Car to Car Image Gallery - 19 Images

Nice to see you back in action, Josh.

Back in the saddle..

I just read about your accident on your website. What an ordeal! I am glad your well again and climbing.
How hard and long were the runnels?

I have a wide monitor on my laptop and still have to scroll to the side ;)

Glad to see you finally did this route!

Should be good now. I included a style sheet and replaced all width property values with max-width to make it relatively responsive for smaller screens.

Good to see you getting back at it. This looks like a fun, solid day out.

Great writing; both informative and good storytelling without being too wordy. One of the best TR's on this site in a good while.

You went through it, that's for sure! Happy you made it back!

Puts good feelings all around to read a bit about your renewed exploits. Climb On!