Getting Palmed on Palmer Mountain

Josh Lewis
Add photos See all photos
“Life is either a daring adventure or nothing. To keep our faces toward change and behave like free spirits in the presence of fate is strength undefeatable.” -Helen Keller

The idea came about when looking at maps of what peak would be a good once. Palmer Mountain looked like a decent one considering avalanche danger was high, then I found Matt's trip report which had me further convinced that this would be a good choice. So I woke up at 5:30 a.m. to get an early alpine start which on the way to the mountain there were some lovely sky colors, sadly trees covered much of the view.

Sunrise from Highway 2
One of my partners wanted to go up Union and Jove Mountain near Steven's Pass which is why I did not get a map of Palmer Mountain. But then as we were in Skykomish the plan took a shift and we turned back to go for Palmer Mountain. We got slightly lost looking for the trail head which was due to missing the first turn, but then once we found the turn, proceeding was good. Eventually we were stopped by a tree in the road which now was our official trail head, which was about a mile from the creek washout of Lowe Creek.

The start was a road walk though the woods which we encountered a little bit of water in the road, but was manageable. Then when we got to the creek crossing it was much easier than expected. Soon we were at the fork in the road, which meant in a few minutes we had to start the ascent up the ridge in the woods. One of my partners was not pleased with this, as we traveled up there were some fallen over trees and such which I did not mind much.

Obstacle
After a ways up a few minor views poked through the trees which got me excited, and I knew that there would be some kind of views further up the mountain. Later on we reached the quarry which we ended up going the wrong way which was left and went up a ridge which seemed like it might be dangerous. We backed off it and then headed all the way back to the road. Once on the other side of the quarry hopes for making the summit seemed to dwindle. We then started going up the on the real route ridge up the mountain.

Team confidence seemed to go down the tube, I knew that us making it was not based on how fast we got to our current position. It would have everything to do with our team effort, attitude, and lack of hesitations. But despite my attempts of encouragements it seemed hopeless. As we were going up we got to a slope where one of our party members felt uncomfortable, so they decided they were not going any further. XDiablox decided to stay behind as well and let me press on. 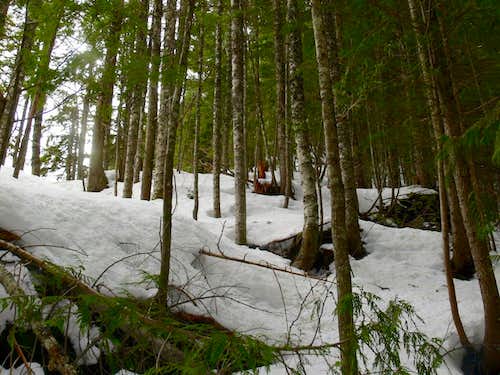 The Upper Slope
Hurrying up the slope pushing on, I knew now there was no time for hesitation. I had to make every moment and every second precious, the voices in your head that command you, almost as if in a completely different state of mind. When becoming very thirsty I would only drink when necessary, effort was now maximum and from here on out there was no surrendering. Or at least as long as it was safe.

As I get higher and higher up the mountain I get more clearings which the excitement now was growing more than ever. In a small sense me pressing on was a "I'll show you guys this is not some lame mountain that is viewless" and part of me figured that perhaps eventually they would be getting bored back there and follow along my tracks to see what the mountain has to offer. 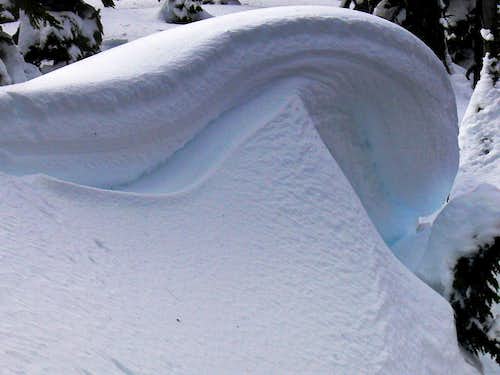 Cornice on the Ridge 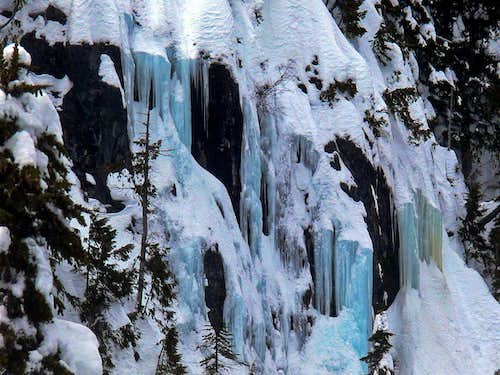 Water Ice Along the Cliffs
I came across a interesting spot where there was a bit of a cornice and steep sections on either side, but with a bit of cation I managed fine. Soon after the views really came about which the clouds all around were blowing around, mountains were glowing, and I couldn't help put take a look at them and of course photograph them.

I had to be quite persistent if I wanted to possibly make the summit, when I finally caught a glimpse of the summit I figured "Ok, there's no way no that I'm backing down". But then as I was plowing snow I then got one of the worst cases of cramps I have ever gotten. It was horrendous, I was yelling, moaning, almost to the point of tears which now moving anywhere was difficult. "Blazes! I'm so close! So close! This can't be happening now!" I then took another step and sure enough the same horrible cramp which now had me stalled. I then forced as much water down as I possibly could, and managed to be able to slowly proceed, and eventually get back to almost full speed although with being careful. 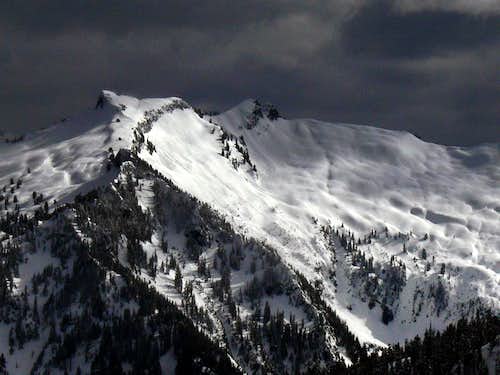 Lennox Peak
I knew time had passed, and it did occur to me that perhaps I should turn around, but then I would look up and see the summit just a few hundred feet above me. Almost as if teasing me. The slope now became much nicer with heavily wind loaded snow which made travel a lot easier. After this was then the spot which I had to lower down into the gully. I decided to ditch my snowshoes in the gully due to the very solid snow. Then I ascended the gully, and made a slow motion dash for the last part of the ridge to the summit. 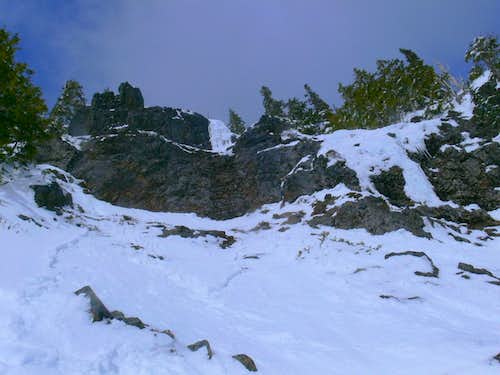 The Cliffs Above
I was wildly excited to have made it, the views were stupendous! I personally liked this mountain more than Evergreen and some of the others in the area. The winds on the summit made me feel quite cold fast, so I had to get down, have a snack and then start the descent. My hands were numb by this point which interest in photography was lost for a while. 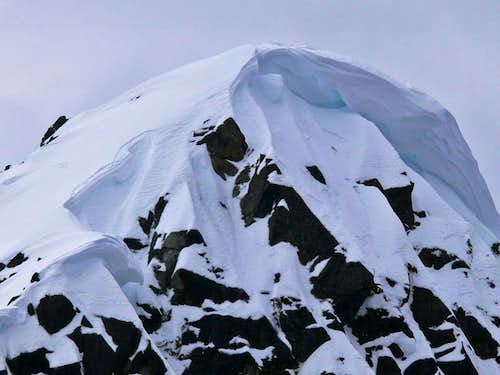 The Summit of Palmer Mountain 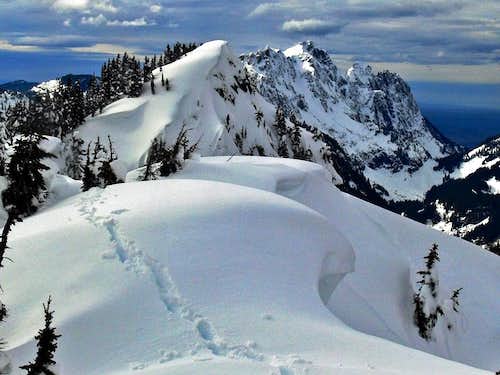 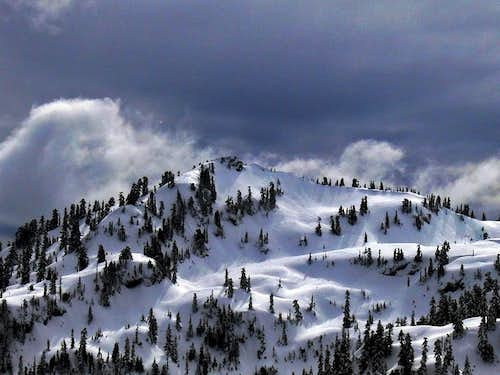 Shifting Clouds
I felt like I was having the time of my life, there something about suffering, pushing yourself limits, the experience, the beauty that makes it so worth while. I wish the world could see what I see. There is so much more I could say, but words are not enough... 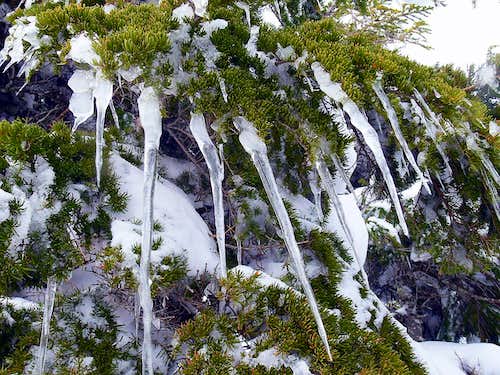 Gunn Peak with a Gloomy Atmosphere
Once out of the gully I then put my snowshoes back on and make a hurry out of there. Unfortunately my snowshoes once again fell off. And sure enough there frozen which means I would have to take off my gloves and break the ice with my hands in the wind which then got very cold. After managing to get them back off I fall in a snow hole which again they fall off. "I really got to get some msr's" I mutter to myself as I pull as hard as I could to get them back on. I now was racing down the mountain. More cramps once again came back making travel down a choir. 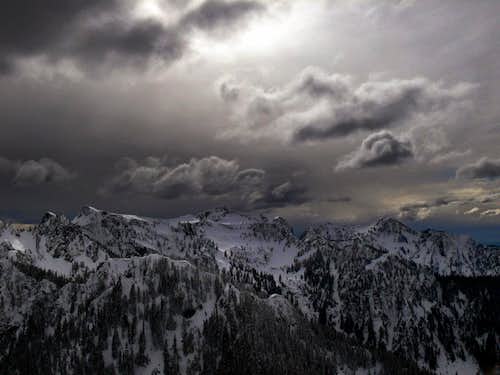 The Sun Attempting to make an Appearance 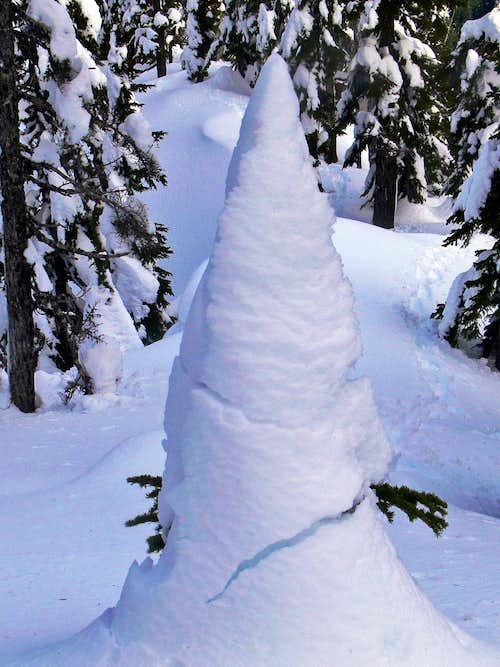 Tree Cone
After much rushing, falling on my face, falling in snow holes, and all that jazz I eventually got to the spot I left them. My snowshoes fells off which I decided to finally put them away. They were not there which I worried now whether they were ok or not. At the bottom of the ridge I finally saw them which I was relieved. Once they saw me they kept on walking which I had a bit of troubles just catching up to them while I was not wearing snowshoes and was so tired. When I finally caught up to them there was some disappointment, but eventually we got back just before dark. 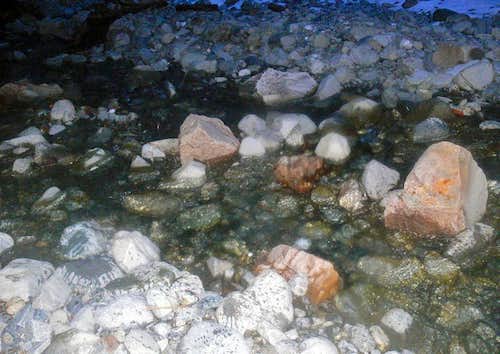